Racing games have been a dime a dozen for years and it must be hard for smaller efforts to stand out. We’ve seen indie efforts in the recent past go for something a little more leftfield and now Supergonk have taken to the tarmac with a fantastical racer with a territorial twist. 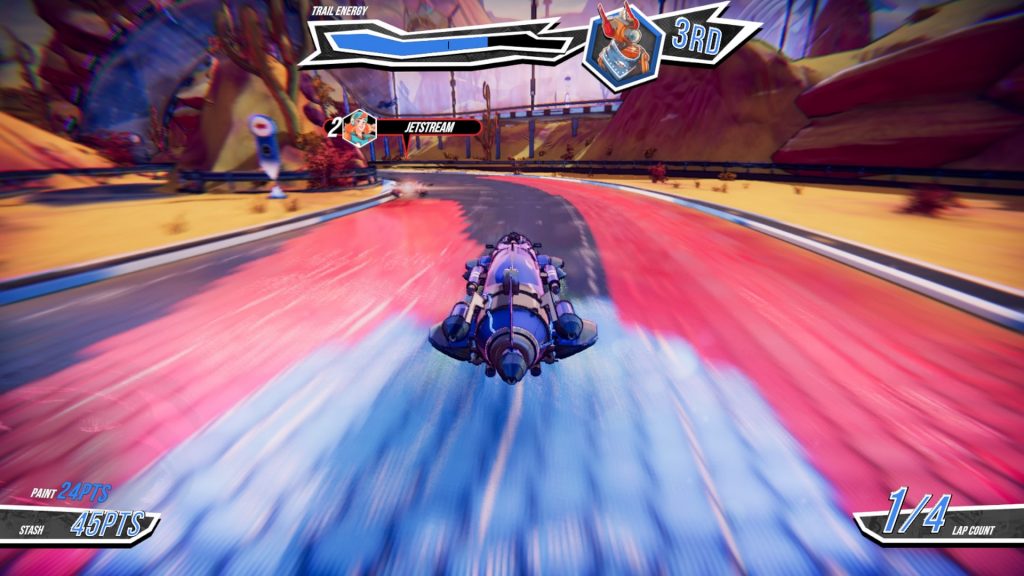 Trailblazers‘ gimmick comes straight from Splatoon. You can paint the track in your own colour and racing on these strips allow you to gain additional speed. Each driver vies for territory and position so most matches involve fighting on two fronts. It’s a nice touch that does help separate this from other arcade racers and the paint does add more colour to an already vibrant palette.

Game modes vary objectives up. Free-for-alls are the most self-explanatory with everyone out for themselves. Gate Chases challenge you to fight for position whilst also hitting as many gates as possible. Hitting gates also paints a trail ahead of you. It allows to extend your boost and gains you more territory. In the early races, seeking out gates can be enjoyable and tends to take you away from the optimal line. Team and partner battles has you playing with and against another rider. 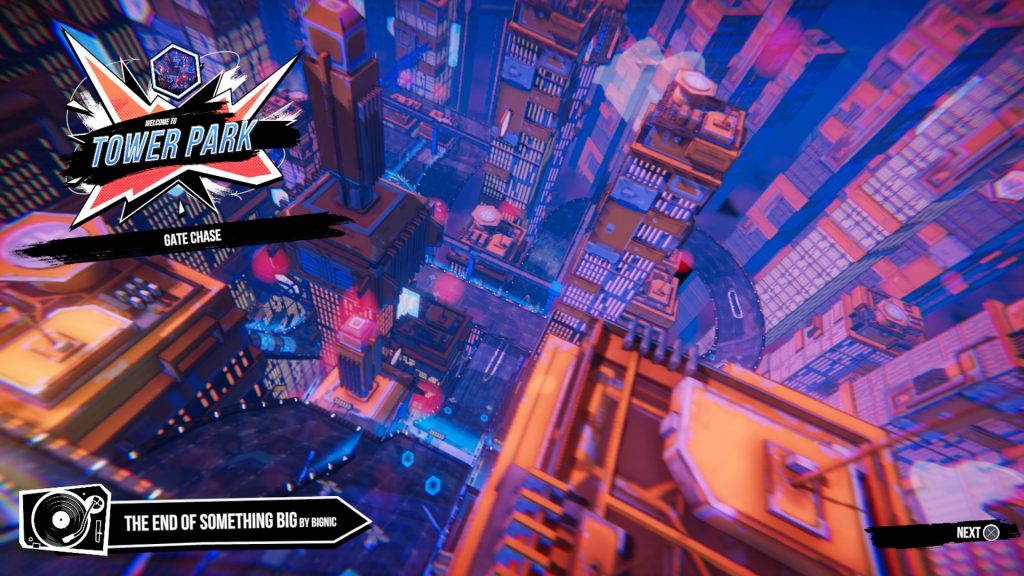 Tracks wind and weave in an out of canyons and feature plentiful moments for branching paths. They’re designed relative smartly and take place in some visually intriguing locales. There’s a colourful, futuristic style that permeates all aspects of the aesthetics which can be quite pleasing to look at. The ten tracks have some genuinely eye-catching vistas which makes you anticipate what could be round the next corner. Vehicles have some interesting designs which mostly fit the driver but they vary in terms of attributes. Some drift better, have greater speed and others are better at painting trails. There’s a generous dollop of F-Zero when it comes to the universe they’ve decided to place all of this madness in.

To go with the great sense of visual style, there’s a nicely curated soundtrack. It’s funky, wild and very fitting of a game set entirely within a world in the far-flung future. It’s very upbeat and reminiscent of soundtracks for games like Jet Set Radio. Engine notes are largely forgettable but you do get feedback whenever you hit a boost and your driver will add some chatter when a grid forms up. 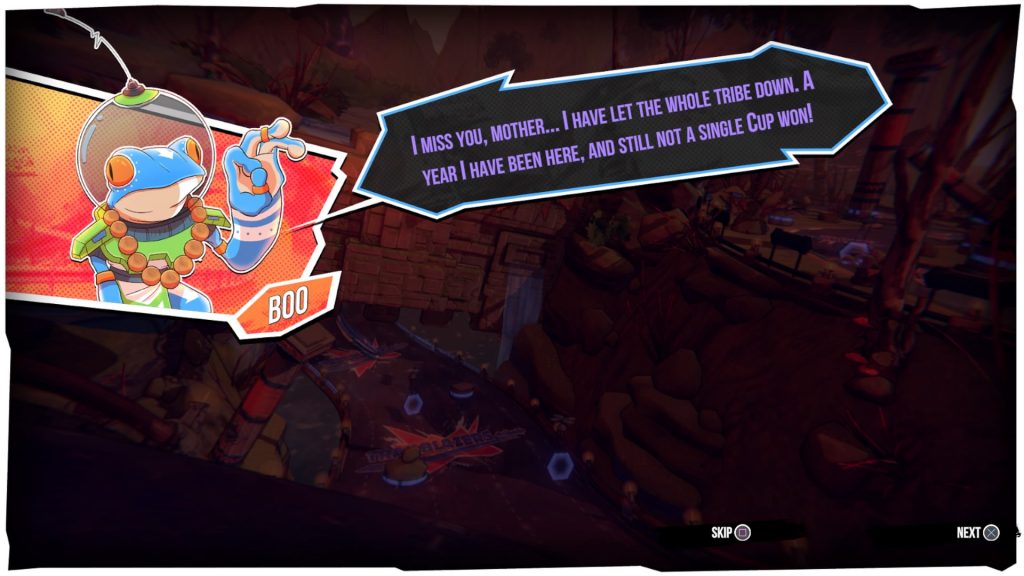 Whilst focused towards multiplayer, solitary competition isn’t completely left out. There’s a single-player campaign that introduces you to the eight playable characters. They carry some personality with some pre-race text exchanges that give them a fair bit of life. Supergonk have managed to do a lot with a little writing and it’s nice to see a roster of cheeky individuals brought to life.

Unfortunately, playing on your own does tend to involve dealing with AI opponents that can occasionally feel unforgiving. Races are short and twisty with the ever-changing nature of the track providing some hard swings. Staying in front can be a tough challenge and can sometimes feel like it’s down to luck. You can focus on beating the track but it seems mistakes are severely punished and regaining lost ground is sometimes an arduous task.

Whilst the handling feels responsive, the tight nature of the tracks advocates you being battered around corners and losing momentum. Learning a track isn’t enough when you’re dealing with a field of five other racers trying to paint the track. The neat idea feels detrimental to racing well. On top of this, the vehicles all seem to have trouble with the sharp turns and twists the tracks present you with. Engine braking can bring you to a stop quickly but most circuits contain obstacles as well. Hitting one and then trying to correct course can result in a series of bumps that completely ruin your race. 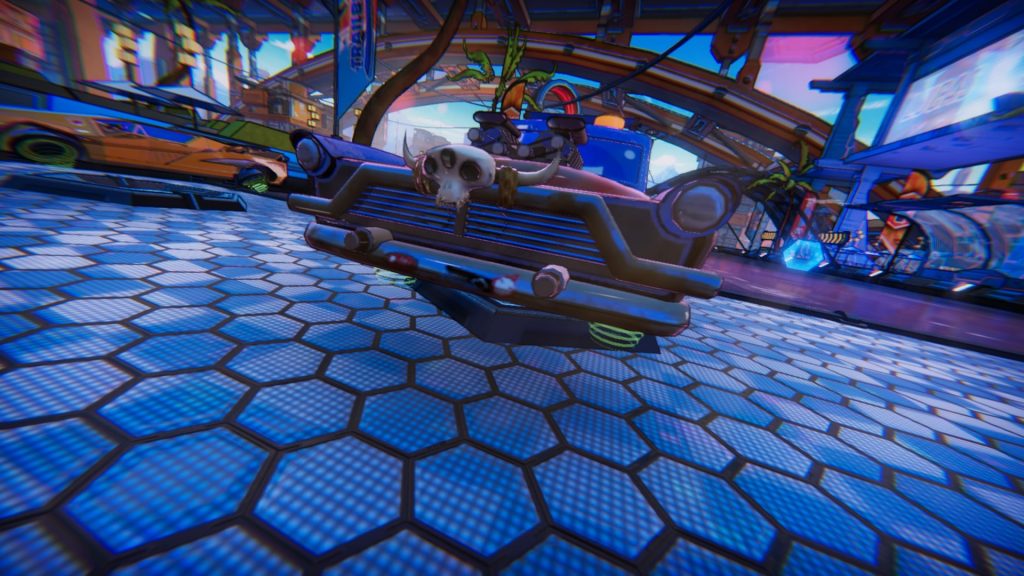 It feels to me like a game that serves better with friends. Cross play is on the table but, even with the PC players in the pool, I’ve yet to find another person. I know it’s an issue beyond the developer’s control but competitive play with other people is arguably where this game excels and, if you’re looking for matches across the globe, you’ll be waiting a long time for another person to join a lobby.

It’s frustrating to see a good concept on paper not strike me in practice. The presentation of Trailblazers is charming and lively but the action on the track just feels hampered by brutal AI and some narrow courses that don’t translate well to a bulky field of half-a-dozen racers.

Review 0
6 Overall
Pros
+ A fantastic visual style.
+ A novel mix of ideas.
+ Great soundtrack.
Cons
- Online multiplayer lobbies are barren at launch.
- The tight track design sometimes doesn't feel right for competitive racing.
- Racing against AI is a lottery.
Summary
For all the good ideas, Trailblazers doesn't gel cohesively. The twisty, narrow nature of the courses do lend the game to a topsy-turvy time. Against the ruthless AI, it's difficult to enjoy but, amongst friends there's a decent party game under the hood. It's colourful and vibrant with a fair amount of personality but there's a nagging feeling that this game can't quite come together.