Townsmen: A Kingdom Rebuilt will be immediately familiar to those slightly longer in the tooth players who remember Blue Byte’s pre-millenium Settlers games. Heck, we’d not be surprised if some of the devs were Blue Byte veterans, so similar is the game in feel to the hoary old series that first debuted on Amiga.

THQ North acquired HandyGames fairly recently, this release continuing their habit of releasing remastered versions of their new IPs. Townsmen originally came out on iOS/Android in 2012, the relatively simplistic graphical style betraying its mobile origins a little. Thankfully the assets were of a reasonably high quality, so the townies AKA citizens are fairly convincing in terms of carrying out their daily tasks. At the same time though, this isn’t exactly pushing the PS4 to its absolute limit, nor would you expect it to. 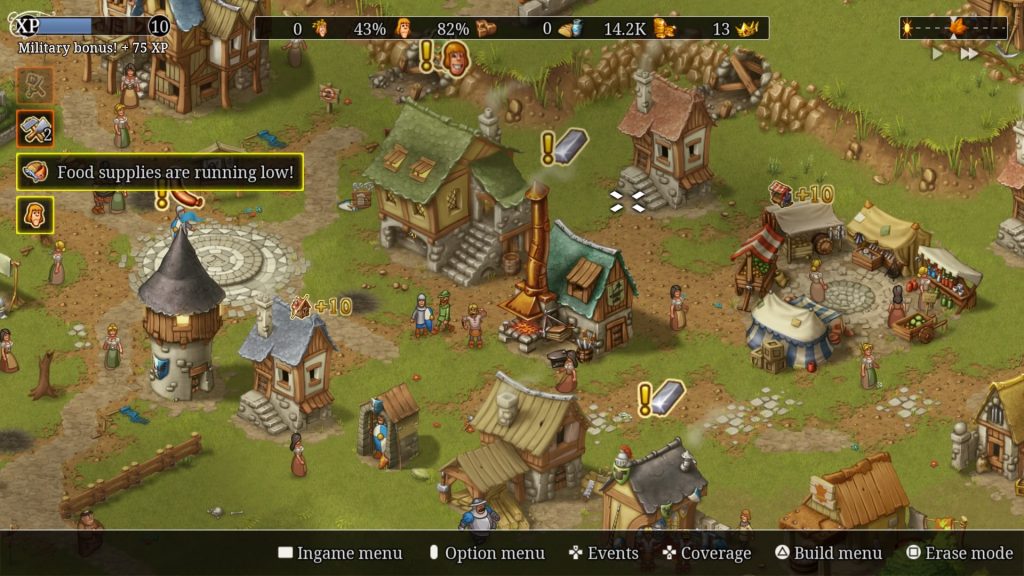 You’re thrown into it somewhat, tackling the games mechanics during a six-scenario tutorial. This is more than welcome as you’d probably be in danger of being more than a little overwhelmed otherwise. During the first couple of hours you’ll become familiar with the vagaries of the supply chain underpinning your fiefdom’s economy. The bottom of the pyramid is wheat, ore and wood. All of these can be refined further to allow building of more complex trade materials. Rather than bore you with excessive detail, it’s all fairly logical stuff. Sausages need a pig farm for example, though ale is a more complex item to produce.

Early on you’ll be confronted by an annoying regal type who threatens to blackmail you for ransacking the king’s treasury. This sets in motion a chain of events where you’re stuck with an imperial garrison in your town. This becomes more necessary as bandit attacks that become increasingly bold are needing to be repelled. In fact, your first trophy is more likely to be for defeating fifty of them, rather than the tutorial as you might expect, such is their veracity. 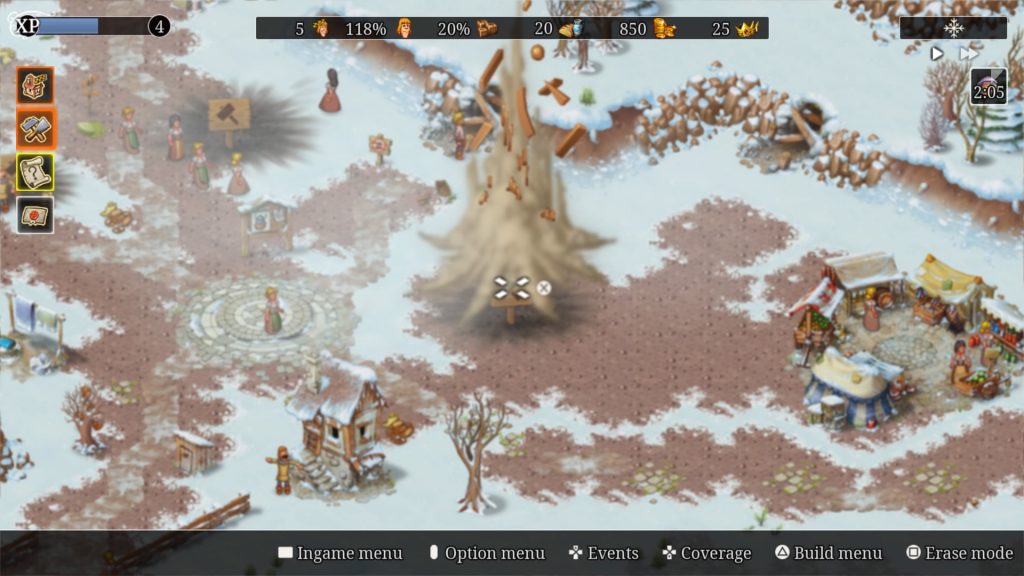 Your production cycle is only really constrained by your ability to store manufactured and gathered resources. That said, you can exhaust mineral deposits fairly easily. Your ability to subsist is also dictated by the seasons, times of plenty coming in spring, summer and autumn, but you’ll have to have squirreled away enough resources for winter. Practically this means you’ll make hay while the sun shines and when it’s winter, move your farmers on to construction work to keep on top of your burgeoning fiefdom’s demands.

Even in the tutorial stages, it can feel a little bit overwhelming sometimes, especially when you’re bombarded by notifications. Oddly, there’s no apparent way to dismiss them. We can understand why a notice about an emergency can’t be expunged, but when it’s a warning about running out of wood, for example, it seems odd. We realised later you can set the alert options to only tell you about severe issues, that makes things slightly less hectic. 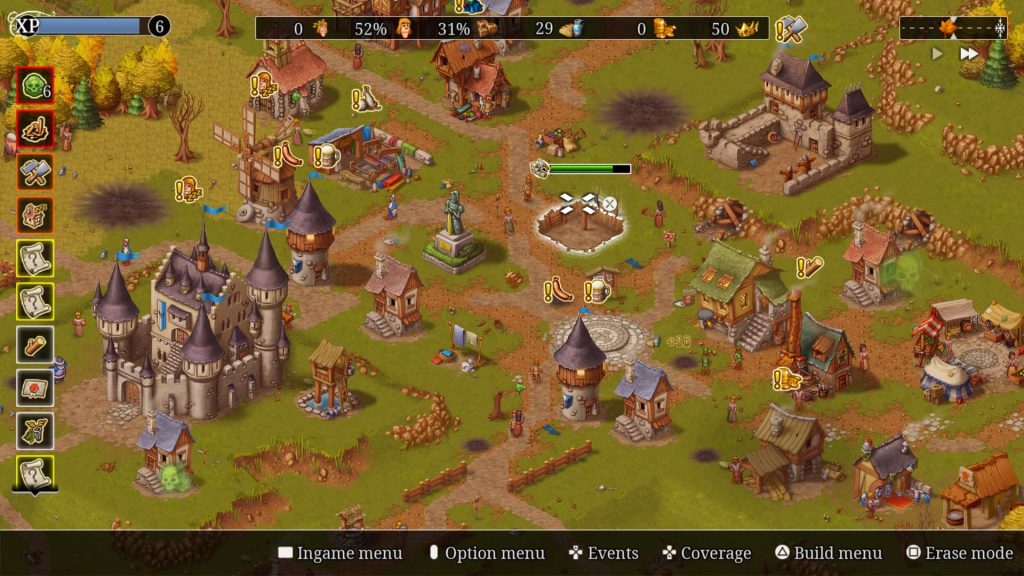 As well as bandits and seasonal variations, your town can be affected by fires that spontaneously break out or bubonic plague that can decimate your population. The former can be solved by having fire towers in range and the latter by having an infirmary in your town. If you have to wait to build either, it’s probably too late. You’ll do well to pre-emptively place them before you’re affected, put it that way.

Your town is nothing without the aforementioned townies. Your town can’t expand without a populace to inhabit it and staff your cottage industries into the bargain. Keep them sweet by providing for their needs; primarily food, warmth and habitation; and you’ll be set. As you progress, they’ll seek forms of entertainment and religion into the bargain. A single church will prove sufficient to start with, but eventually your population will grow beyond a level your amenities are able to cope with. 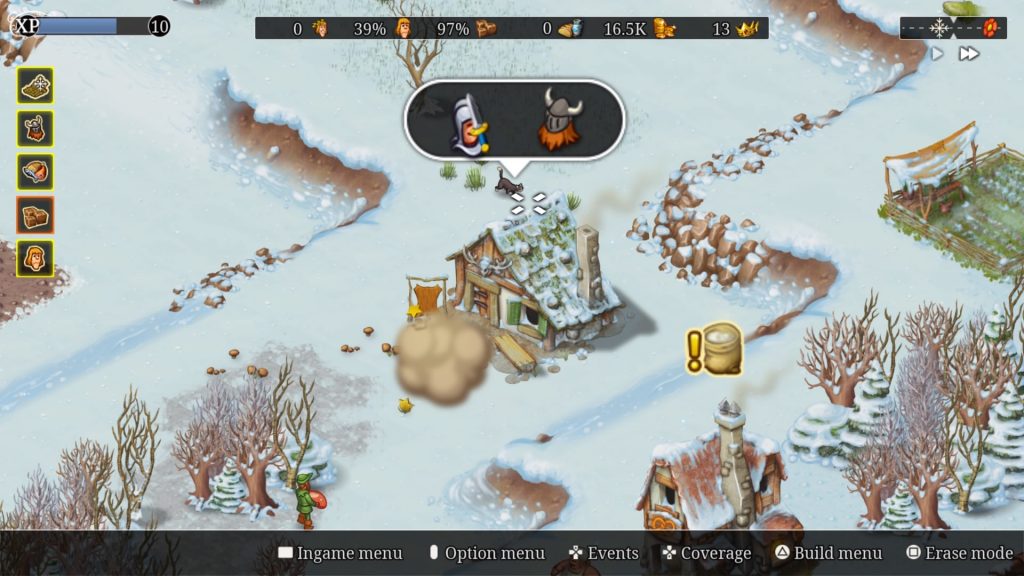 The further you go with Townsmen, the more you realise that this effectively the same mobile game with everything unlocked. Townsmen lends itself well to short gameplay spurts, especially since the missions are broken down into distinct bite-sized scenarios. As opposed to a distinct linked campaign anyway.

If you’ve accumulated enough Thaler (being an archaic German currency) you’ll be able to get through some objectives quicker than if you actually waited for your production processes to catch up. Though in the final tutorial mission where you need to find the bandit camp as your final objective, we encountered a bug. Despite having got our garrison to co-ordinate searches in each area of the game map, via each of the four sub-objectives, the next step didn’t trigger. Perhaps a bug or maybe deliberate obfuscation.

Either way, it felt like we were playing that scenario far longer than felt necessary. As we type this, we hope a complete power cycle of our PS4 and a virtual kick up the arse move things along a little. Sadly, upon getting home it was no different. Perhaps a patch will be forthcoming? 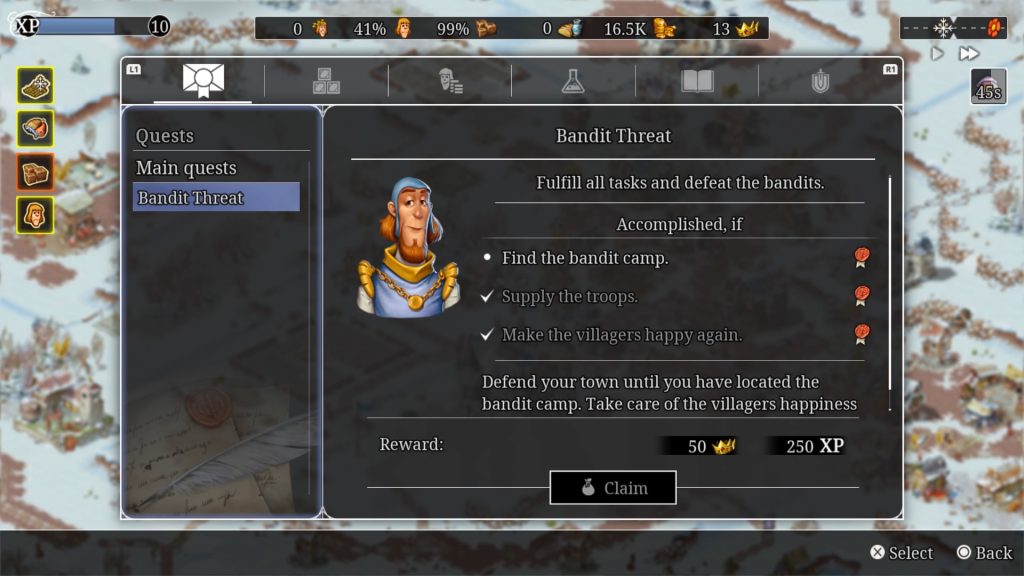 Sound effects and music are nothing spectacular, but neither will you be muting your TV either. It all bubbles away pleasantly enough, your townies babbling away in a Germanic-tinged Simlish analogue. Though when a townie is nagging you, it’s annoying regardless of whether it is a cute cartoon character doing it or not.

As well as being able to get trade goods quicker than you make them by buying them, you can expedite building construction.  This uses what we presume to be a mechanism left over from Townsmen‘s mobile roots. You accumulate what looks suspiciously like a premium currency you probably had to shell out for in the F2P original. This breaks the balance a little bit, but not ruinously so.

In conclusion, Townsmen is a fair port of a mobile original that lacks only slightly in the campaign aspect. In that it betrays its F2P roots a little. Yes, you can get a little bogged down reaching some objectives, but nothing terrible here. It’s telling that we took a grand total of eighteen screenshots for this review, you can lose hours to this.

Townsmen: A Kingdom Rebuilt
7 Overall
Pros
+ Bright and breezy graphics and animation
+  As close as you'll get to Settlers on current gen
+ Spot effects and music are good value
+ Tons to do here as all the scenarios from the original game are unlocked
+ Absorbing gameplay

Cons
- Not exactly pushing the envelope graphically
- F2P mechanics are never far from surface
- Campaign afflicted by its mobile origins a bit
- Nagging in pseudo-Simlish is still nagging
- Completing objectives doesn't always trigger win conditions, pacing a bit off
Summary
Townsmen: A Kingdom Rebuilt is a good mobile conversion that needs a couple of kinks ironed out, but an accomplished post-THQ Nordic acquisition release from HandyGames.

One thought on “Townsmen: A Kingdom Rebuilt – PS4 Review”