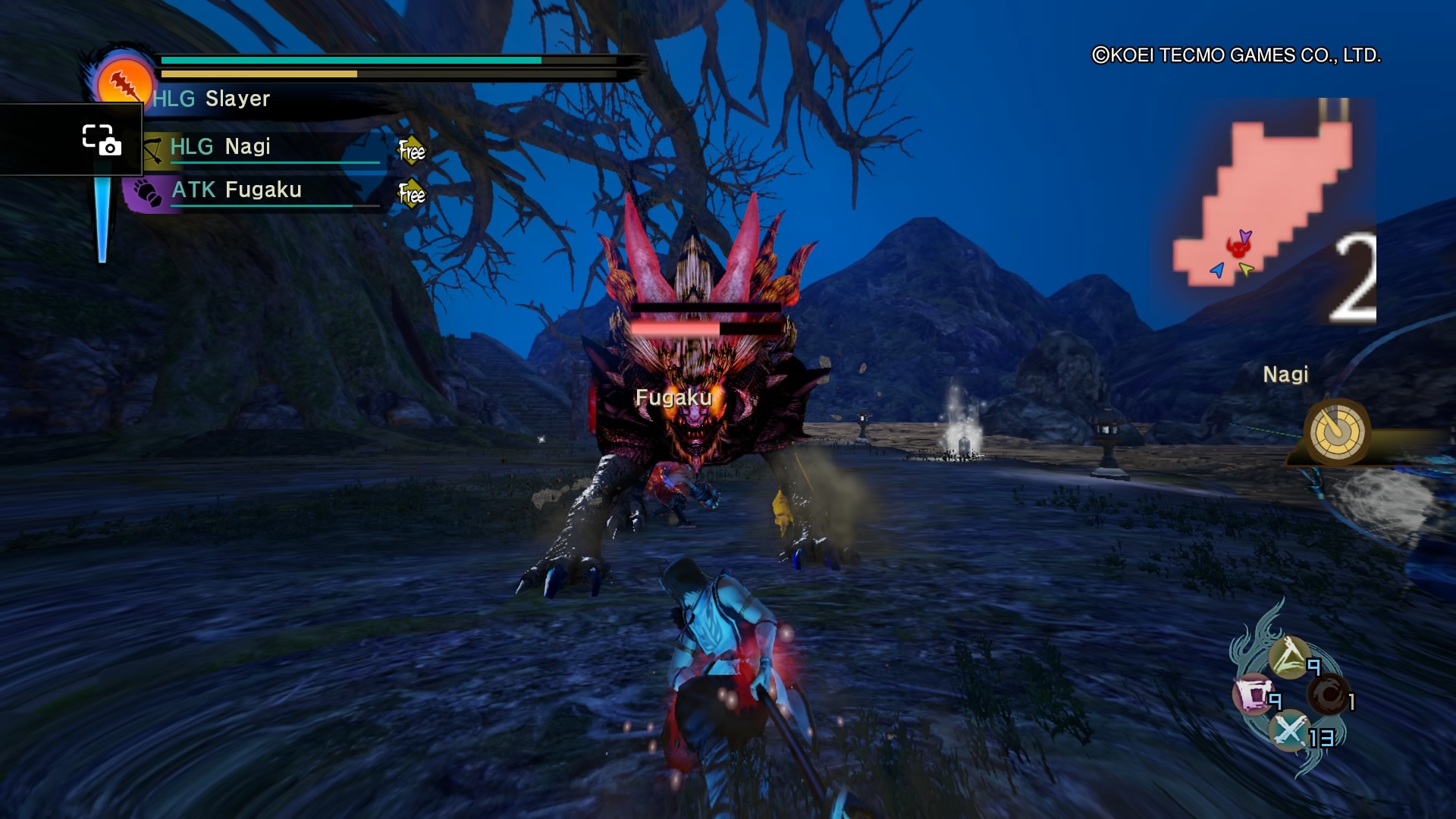 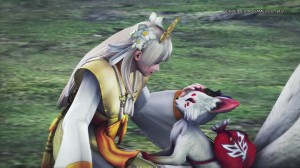 Before I look at the various merits and flaws of Toukiden: Kiwami it is worth noting that, on paper at least, I shouldn’t like this game.  I’m not always a big fan of Eastern-developed action games.  They are often clunky and inelegant, they usually have UI issues, text-heavy plots that would be inpenetrable no matter how they are delivered and then you have the Japanese staples of ‘cute’ squeaky creatures, the kind of difficulty curves that look like a Richter scale reading in 1945 Dresden.

Toukiden is guilty of much of that and for the first three hours I was questioning both why this was made and why on Earth the publisher would let us have a review copy of it.  At this point I was fighting the urge to quit the game, annoyed as I was by the clunky melee combat and the low quality presentation.

My next three hours were a little different.  I still wasn’t sure about the game but I had now gotten to grips with it a bit more and was enjoying it.  And then it all clicked.  At this point, some twenty hours in, I’m sort of obsessed with it.  I’m still not that into the plot or characters, the game lacks variation and the controls are generally a bit too clunky but that stuff ultimately doesn’t seem to matter when you are hopelessly addicted to it.

Toukiden: Kiwami is essentially an extended version of Toukiden: Age of Demons, which was a Vita game.  You get the original billion or so hours and then a bunch more missions (and weapons) but now it is on the PS4 as well as the Vita (with cross-over multiplayer for both formats).  The game itself is apparently a Monster Hunter clone.  I wouldn’t know about all that.  I’m just a reasonable guy.  I pay my taxes.  But I’m informed that that’s the genre Toukiden sits in.  For me, I describe the game as Dynasty Warriors but without the crowds.  You play as a chap who runs around small levels, clearing out enemies and finding loot.  Essentially, it is a hack and slasher but it is far from a button-masher.  There’s no randomly bashing square and triangle and watching your on-screen avatar whirl around in a ballet of death.  Everything here is a little more considered.  You have to earn your victories.

The story is that you are a Slayer and you are tasked with protecting your part of Japan (the Midlands) from the oni a seemingly unstoppable force of shadowy demons.  To do this you generally hit them with something sharp, or something blunt.  Or you can use the gun (rather you than me) or the bow (my weapon of choice and part of the reason why I love this game).  There are a good choice of weapon types for you to experiment with and I recommend playing with most of them before you make your choice. 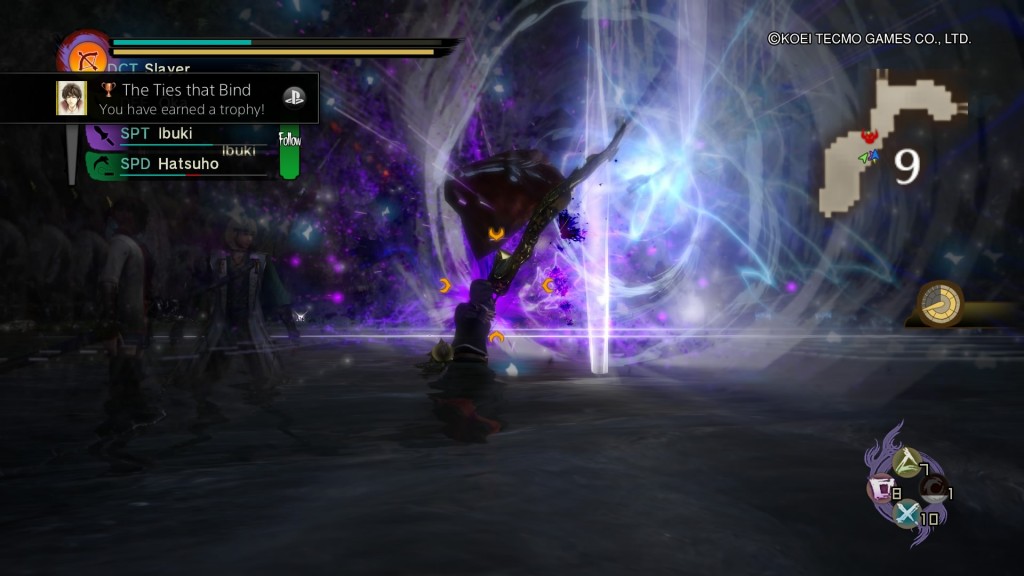 Along with AI, or human, help (although these are seperate campaigns) you take to the battlefield fulfilling various mission tasks such as finding objects, taking out various numbers of smaller enemies or facing off against a boss oni.  The bosses are large creatures that have to be dismantled, one limb at a time, before you finish them off.  The majority of the gameplay is based around fighting these bosses and these range from kind of elephant sized to ‘fuck off, I’m a giant.’

What makes these battles fun, rather than the usual boss battles, are the fact that they aren’t horrendously difficult and that your AI team mates are very useful.  And taking down a huge demonic oni is immensely satisfying.  The only problem is that after a while there are more often a boss oni in a level than not, which slows progress a little.  But so far, I’m far from bored of it.

You don’t level your character up in Toukiden.  Instead, you level up your comfort with a specific weapons.  Get lots of hits in with it, and you can fortify it (essentially levelling it up).  The question is, do you stick with your fully-upgraded mid-level weapon or go for the baddest bad boy weapon you can find and level that up instead?  The good thing though is that you can switch weapon styles as much as you like and replay earlier levels if you want to level other weapon types up. 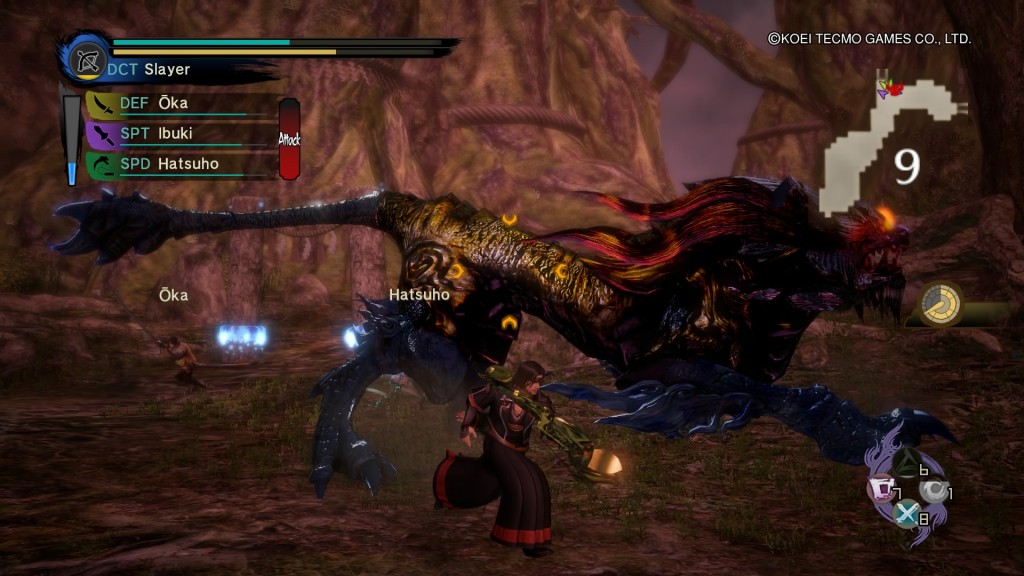 Eventually there will be more things to consider than simply killing and looting.  Weapons can host Mikamis which are the dead souls of fallen warriors.  These add various boosts which can make the difference in battle and you can level them up.  You also befriend a Tenko which is a squeaky fox thing that can help level up Mikamis too and can go off on missions alone to bring back resources.  You can also send other warriors out on missions.  It’s all pretty straightforward though and then options are slowly unlocked as you play so it’s not like the latter Assassin’s Creed games which are basically murder management sims.

Unfortunately, Toukiden is one of those games where it is easy to like (eventually, once you’ve put the time in) but hard to recommend.  You may well end up thinking it is a load of bollocks and from your perspective you may be right.  It can be repetitive, the story may completely fail to capture your interest and you make find yourself yearning for the kind of refined combat that Bloodborne offers and, if you’re a Monster Hunter fan, you may well be annoyed by the flat environments and utter lack of exploration as well as the slow introduction of new monster types. 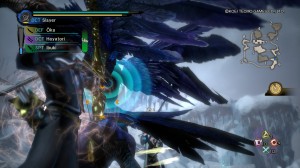 Or the game will surprise you and will see you forsaking all your other games so that you can spend another evening taking down oni and saving Japan’s answer to Birmingham.   For me, it is all about the combat and the levelling.  While the levelling doesn’t match the likes of Diablo III, it’s decent enough to keep you interested between battles but when you are in battle, picking your targets, managing your stamina and pulling off power attacks, it all gets a bit special.  That’s the bread and butter of the game and it does it well.

The presentation is clearly that of a Japanese game.  There are dramatic cutscenes but then there are sentences of text to tap your way through.  There are some lovely, detailed enemies but then there are a lot of enemies that look quite ordinary and the enviroments are unfortunately very plain.  The menus and the options within them aren’t always very clear and easy to understand.  The game doesn’t explain itself very efficiently at first (and if you download it and play it before it is fully installed, you can play and save your progress but you can’t load it).  Much of the presentation woes may be down to the game’s Vita roots but the game does have its PS4-worthy highlights too and when all hell is breaking loose against a boss, the game does its job well.

So, somehow as a relative beginner to the genre, I’ve become a big fan of Toukiden: Kiwami despite its obvious flaws and the fact that there are many things going on here that should irritate the hell out of me and that really speaks to how enjoyable the game is.  That said, I’m clearly the worst person in the world to review it.  So if you got this far, thanks!

Toukiden: Kiwami
7 Overall
Pros
+ Satisfying combat. + A long, addictive campaign. + Lots of weapon options. + Epic bosses.
Cons
- Mixed presentation. - Not immediately accessible. - Lacks variation. - Normal missions eventually disappear and the game becomes a succession of boss battles that get dull after a while.
Summary
Toukiden is initially very enjoyable. The combat is great and kind of epic, but eventually it becomes the biggest of grinds. But it takes a while to get there and until then it's great.