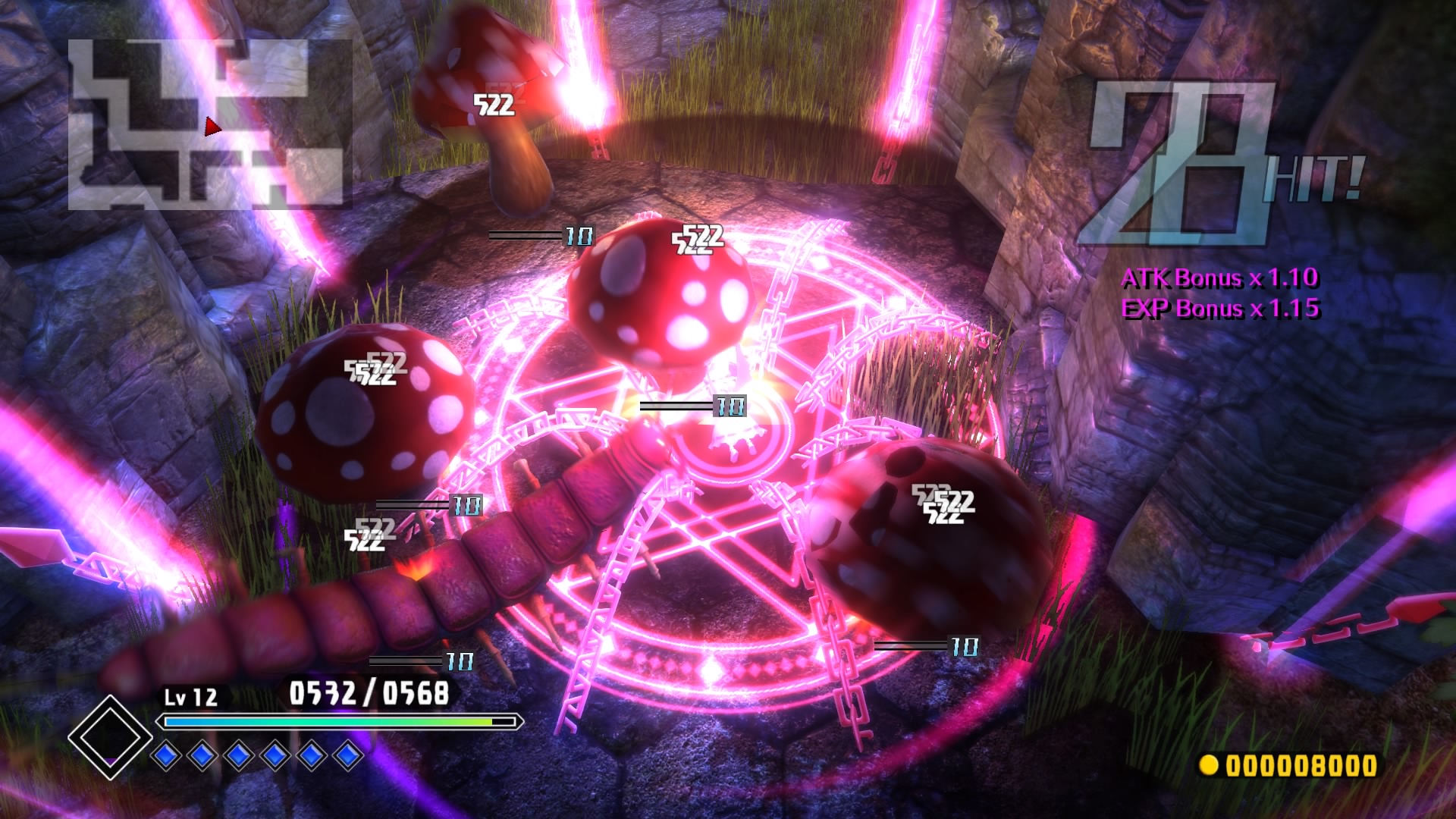 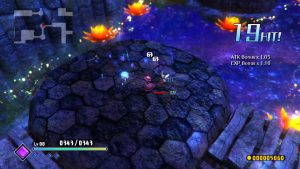 We reviewed a Touhou title not too long ago, Touhou Genso Rondo: Bullet Ballet, which was a bullet hell shooter/fighting game starring a cast of female characters. Touhou: Scarlet Curiosity stars the same characters but is an action RPG.

You get to choose between two characters to play as, the vampire Remilia or her maid Sakuya as they search for a monster that’s causing them trouble. The story is barely there to be honest, you literally go to a location, don’t locate the monster and move onto another area. You’ll encounter some bosses who will fight you just because but it won’t be the story that keeps you playing this one.

Whichever character you choose you pick a location on the world map and then make your way through the area, defeating monsters, levelling up and picking up loot. The most basic combat involves simply tapping the square button to knock out an easy combo, but you can apply special moves to circle, triangle and R1. There are skills and spells; skills use up a meter that refills pretty quickly and are good for basic crowd control whilst spells completely empty the spell meter and takes a while longer to refill but are very powerful. 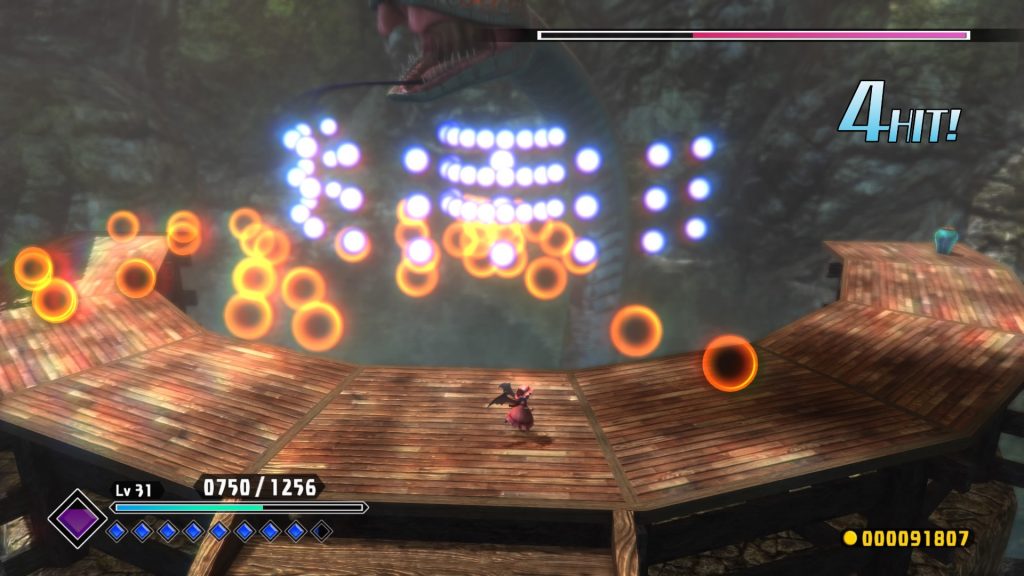 As you level up you unlock new abilities and so it’s up to you and your play style which ones you equip. I personally liked the spin move for crowd control, hitting everything around me and then a more powerful ranged attack and just the strongest spell I had at the time. There are upgraded versions of certain abilities but this tactic worked for me the entire game.

See, Touhou: Scarlet Curiosity is a very easy game. I didn’t die during combat once whilst completing it and even if you do die then you merely lose some money and get respawned at the nearest checkpoint. It’s not that I’m really good at the game as there isn’t really anything to be good at. There’s no blocking, dodging, parrying or anything like that. You tap square or use some skills until something is dead and then you move on. You can jump and you can use that to dodge attacks but there’s no real finesse to the combat.

Once you get to the bosses things seem to improve as they shoot bullet hell patterns at you, which is a nice tie in to the other games, but these are too easy as well. Things do get better as you progress but these aren’t boss battles you’ll remember for long.

There is some light platforming and this is where I had the most problems. For the majority of the game it was fine but if you fall in water then the game treats it like a death, costing you money and on one level later on I lost over a third of my cash. The controls aren’t perfect but I think the main culprit is the camera. You have no control over the camera whatsoever and during combat that means you can get attacked from off screen or the view can become obscured by scenery but during platform sections, especially if there are traps as well, then you don’t have enough awareness. God help you if you’re jumping into the camera. 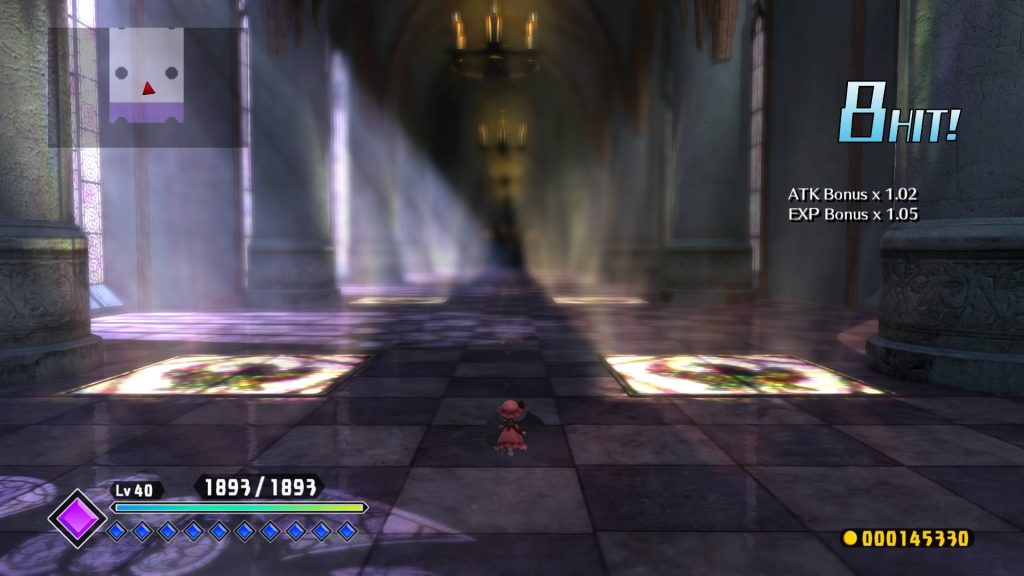 The only other wrinkle to the formula is the addition of loot. Finding chests and killing enemies will drop loot which is completely random. It happens regularly so you can change things up pretty often but as you pick items up there is no indication if it is better than what you already have equipped or not, you have to go into the menu to look. Similarly if you’re trying to sell some of your inventory then you have little way of seeing what is good or not from that menu, instead having to remember what you want to keep if you do. The menus are also a little over sensitive with one button press often counting as two.

Visually the game also falls short. Everything is over a generation behind although it does run smoothly at least. There are times, usually involving water, that look pretty nice but the majority is disappointing. The 2D portraits for the characters during conversations are also pretty weak and the depth of field is a little heavy handed. The music is generally pretty good though with some catchy, if not necessarily memorable, tunes.

Only in writing this review did I realise that the Touhou series as a whole is a one man effort, but here it shows. Lots of really obvious improvements could have been made to almost every aspect that a more experienced studio would have fixed. Not being able to view a full map and levels sometimes not even having a mini-map is another example. The game is also quite short for this genre and although there are two characters there’s not a massive difference between them. You do unlock a bonus dungeon after the credits but you could still easily complete it, doing everything, in a couple of days. 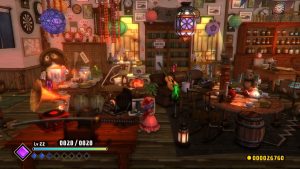 Touhou: Scarlet Curiosity is not actively bad, it’s just a little bland. A better combat engine could have dragged it up a couple of points but it’s so simple that it requires no skill at all. The story is weak to non-existent and almost every other element of the game is under cooked as well. I would say you could check it out if you want a stroll through a colourful world if nothing else but the asking price is a little high for that. If you’re interested then wait for a sale.

Touhou: Scarlet Curiosity
5 Overall
Pros
+ Can look good at times + Consistent difficulty + Lots of loot, decent amount of moves to unlock
Cons
- Weak graphics overall - Simple combat which is too easy - Bad camera
Summary
Touhou: Scarlet Curiosity is overly simple to the point of providing no challenge. It's not broken but almost every element could be improved in some obvious way to make it more interesting.