The long-running one-man Touhou Project has been delivering games for over 20 years. Fluctuating between bullet hell shooters and fighters, Touhou Kobuto V: Burst Battle arrives on the PS4 to give fans in the west another look at the long-running series. 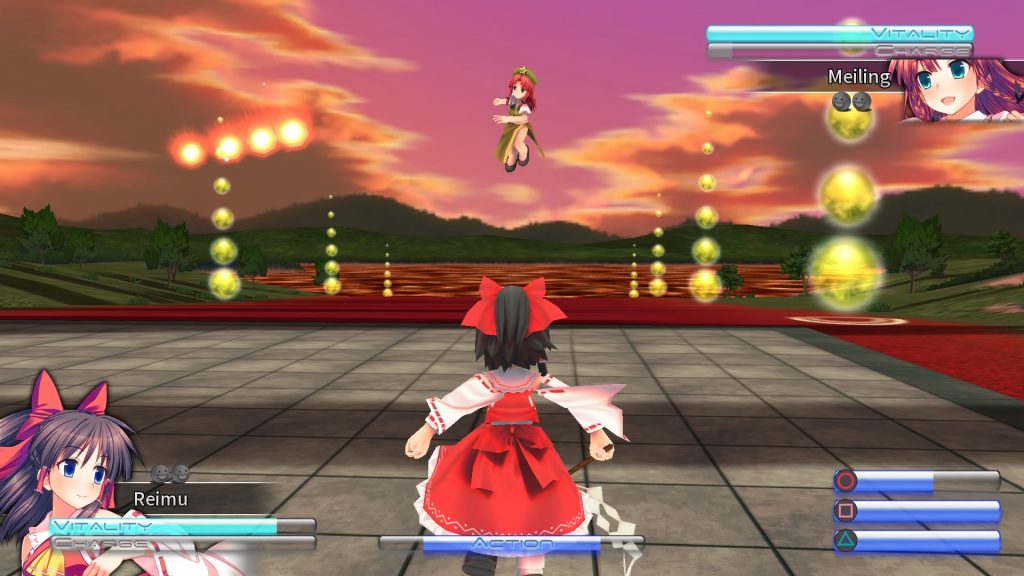 The bullet hell aspect translates surprisingly well to battle. Each character has a main attack, charge attack and a sub attack. The two former options act as spread-guns with your main option dealing more damage. Sub attacks provide a defensive shield to hide behind and absorb opposing bullets. You have a block to defend and also have a dash move to dodge and create space.

All these options combine to provide a frenetic, competitive fight, although precision can be hard to come by as your opponent moves quickly. Both competitors have stamina to manage and a burst meter to accumulate. This is done so by shooting or absorbing your opponent’s ammo when they take aim. It’s an interesting system and the spell cards which you can cash your burst meter for have a high success rate. It can turn the tide of battle to the point where a direct hit can end a match there and then. 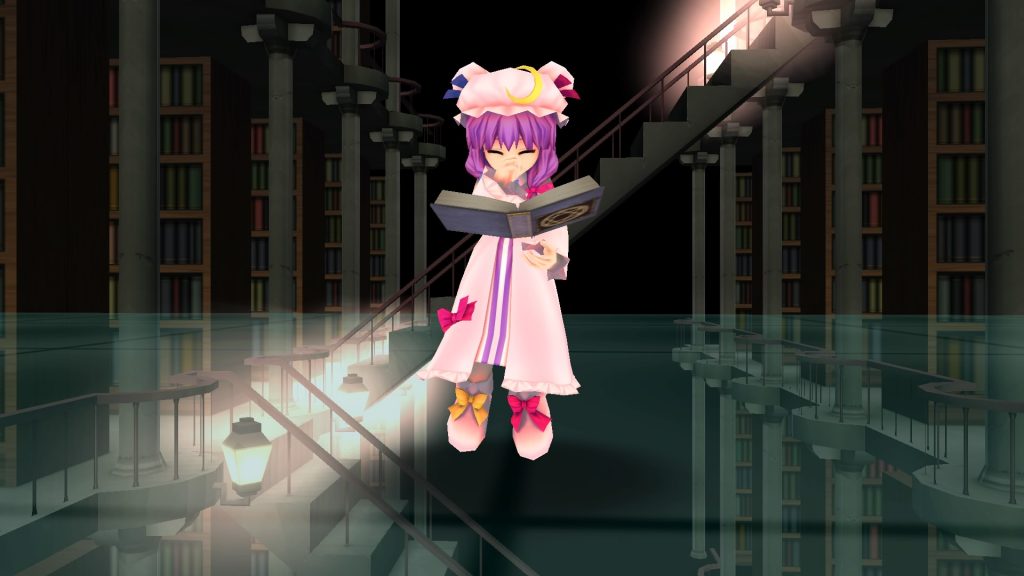 Fights become mostly ranged encounters with fighters looking to control the space within the arena from a distance. Melee combat is an option which can deal plentiful damage, presuming you can get in. Once there, you run the risk of being countered. Modifying your attacks with presses of the dash and block buttons doesn’t tend to provide as much move variety as expected. Cooldowns on abilities are short which allow for you or your opponent to dish out a few before recharging. Running out of stamina predictably brings a character to a standstill. A good moment to get some damage in but also perilous when it afflicts you.

It’s not complicated but the lack of a manual or introductory tutorial results in a harsh first impression. You can explore in more detail with a comprehensive training mode, allowing you to practice specific scenarios and try out what tools you have at your disposal. You’ll need it as the game contains no tutorial and, rather bafflingly, there’s no manual in this version.

Touhou Kobuto V: Burst Battle holds some seriously disappointing visuals. Whilst attacks are colourful, it all looks very behind the times. Characters do not carry the same detail as their 2D portraits suggest and the arenas are barren with some fairly bland background art. It underwhelms with no real moments of inspiration or flair. It’s functional at best but looks very flat. 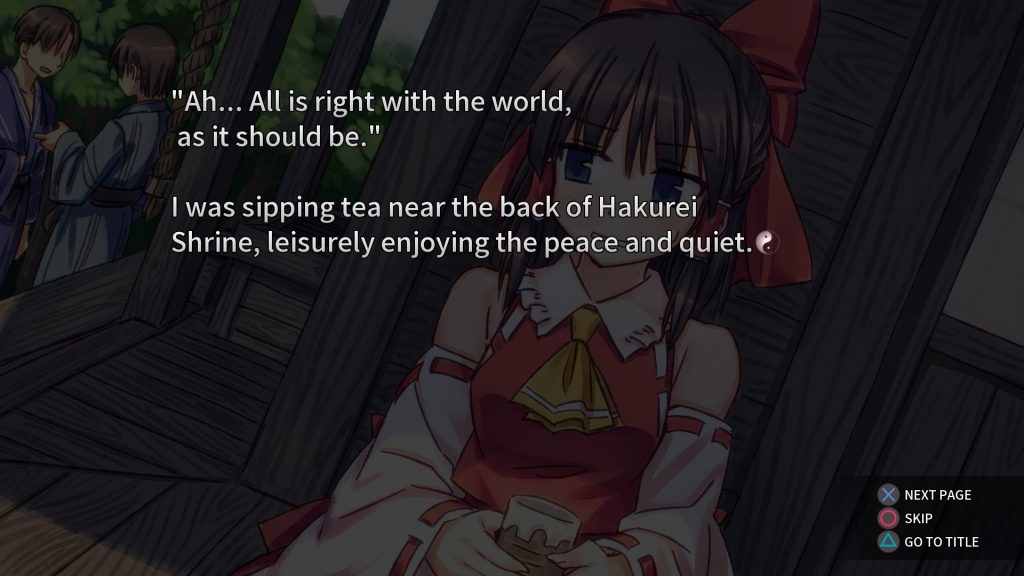 Sound fairs better with some cheery, upbeat music accompanying the chaos. Characters call out their moves but it’s difficult for me to really determine or anticipate what’s coming. They all screech they’re somewhat indistinguishable from each other.

Modes flatter to deceive. Arcade and Score Attack offer similar experiences with the latter only differentiating itself via a scoring system. Online fighting for Westerners seems like a graveyard. It appears the lobby system allows you to view fighters in other regions, only to halt proceedings before the match can start. It’s a shame as I can see this being good fun against others.

Story mode begins you as Reimu, the main heroine of the Touhou series. You face off against the other characters in a series of bouts as you try to unravel a mystery involving a vampire conspiring with a yokai. It’s presented in a typical visual novel style with portraits and text conveying the dialogue. Given how ordinary the three dimensional assets look, this was probably the best option available. This mode does give you a look at the cast of Touhou Kobuto V: Burst Battle. They have different styles with some really packing a punch. As you progress, AI complexity ramps up with some difficulty spikes presenting themselves along the way.

Competing against the AI can show up some of the battle engine’s deficiencies. As mentioned, attacks are troublesome to predict and, whilst improvement comes quickly, the rate at which the CPU can attack can leave you pinned down. They’re deadly with their spell cards and can really stun you into submission. Arenas rarely feature cover so you’re always exposed and under fire. I struggle to negate the AI’s offence and it leads to a frustrating experience. There’s some really hard swings at play and a faultless round can be followed by a complete murder. 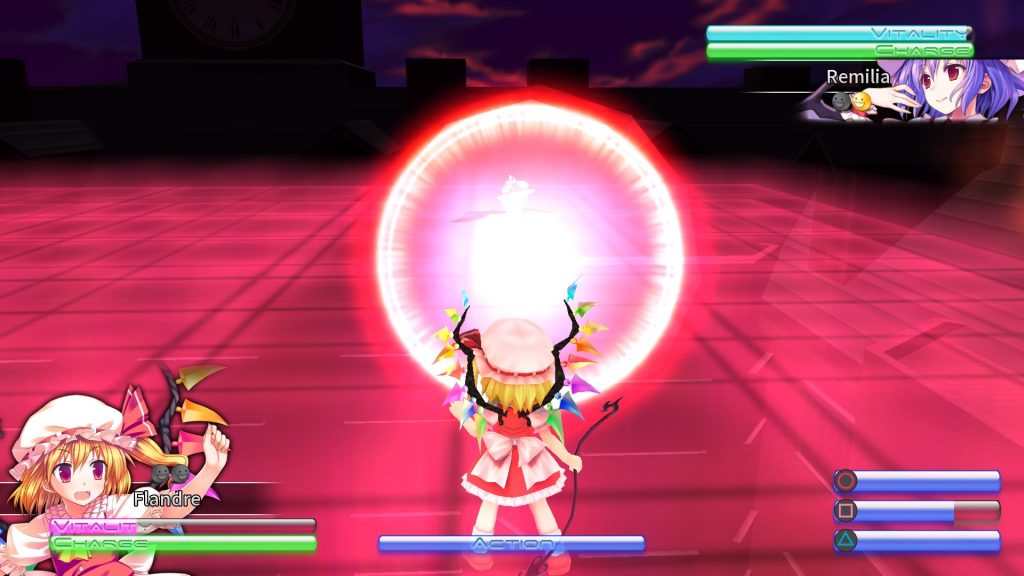 That’s been my experience with Touhou Kobuto V: Burst Battle. There is no easy entry to what feels sometimes impenetrable. The battle system offers potential that is undermined by a savage AI. With local options providing your only real opportunity to fight another human being, the game looks short of legs as you run out of patience.

Touhou Kobuto V: Burst Battle
4 Overall
Pros
+ Enjoyable soundtrack.
+ The fight engine has potential.
+ Has some detailed character portraits.
Cons
- AI is unpredictable to fight.
- Dated, bland visuals.
- A small selection of modes.
- There is no online community in the West for this.
- No tutorial, unless you own the Switch version.
Summary
On paper, the battle engine should provide an interesting scrap with a varied, albeit small, roster of characters. Unfortunately, the AI feels brutal to fight and the lack of a manual means you're fumbling in the dark until you figure out what works. It's needlessly uninviting with the slim choice of modes and the lack of an online community meaning this game really underwhelms.