The Torchlight series has made a reasonable name for itself by offering its own budget take on the Diablo experience, growing while its inspiration does too.   We reviewed Torchlight II back in September of last year and while we appreciated its solid gameplay mechanics, it was just a bit too staid, offering nothing new to the dungeon-crawling genre.  Well, now we’ve got Torchlight III, the first one not made by Runic Games (although some of the same people are involved) and indeed a game that was originally conceived as an MMO.

Fans of the series will know what to expect, this is an action RPG where you explore procedurally generated areas fighting random mobs and acquiring loot.  The Diablo-style isometric viewpoint remains, as does the pocket-friendly price.  As ever, you get a choice of classes to play as with the options now being a Sharpshooter, Dusk mage, Railmaster and Forged, a sort of steampunk robot.  However, Torchlight III starts adding choices and elements immediately, and with not much hand-holding. 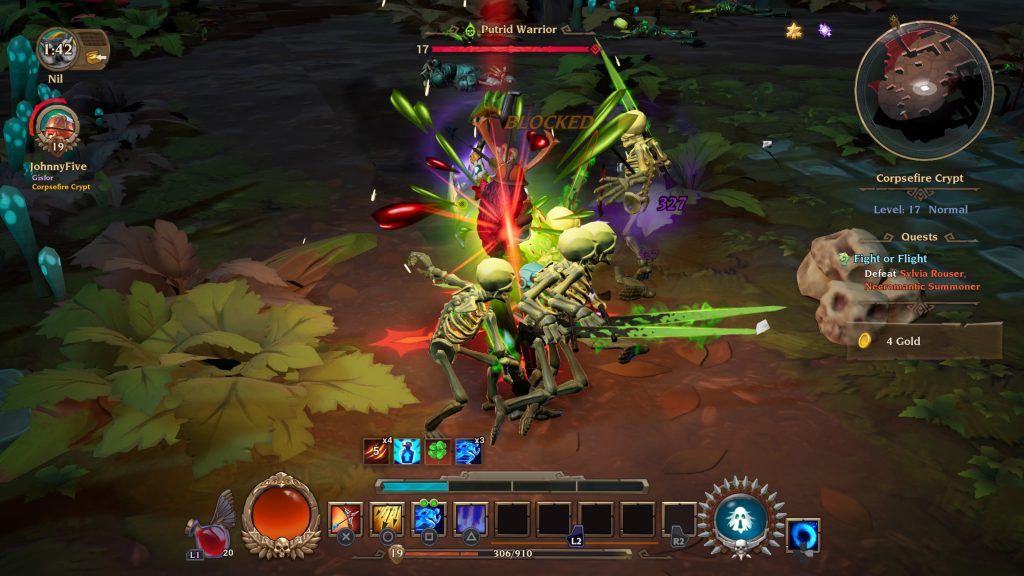 After you’ve picked your class (essentially deciding if you’re a ranged fighter or a melee one) you then get to pick a ‘relic’ which gives you an extra skill tree that is focused around a different type of damage.  Fire, ice, plague, electric and bleeding are all offered and you’re faced with a screen full of potential perks, trying to figure out what might be good.   It’s pretty confusing initially and something of a leap of faith, although guides are out there for anyone looking for help putting together a good build.  I went with a fire-wielding sharpshooter while Gareth, fellow PSC writer and co-op bezzie, went with a blood-drinking robot.

Once you get past that set of choices, you are introduced to the hub world where you’ll get most of your quests for the game’s first chapters (there are three chapters and therefore three of these hubs).  There are lots of things here that aren’t explained too well and initially it can all be quite daunting.  One guy sells rubbish armour for zero gold.  We’re still not quite sure why but suspect that’s a throwback to the game’s MMO roots where that guy would have been taking your real world money.  Another person lets you gamble by buying random gear on the off-chance that you get something good (it sounds all very EA but it’s done very inoffensively).  Another person deals in pets, one sells potions (another pointless thing given that these drop very frequently). 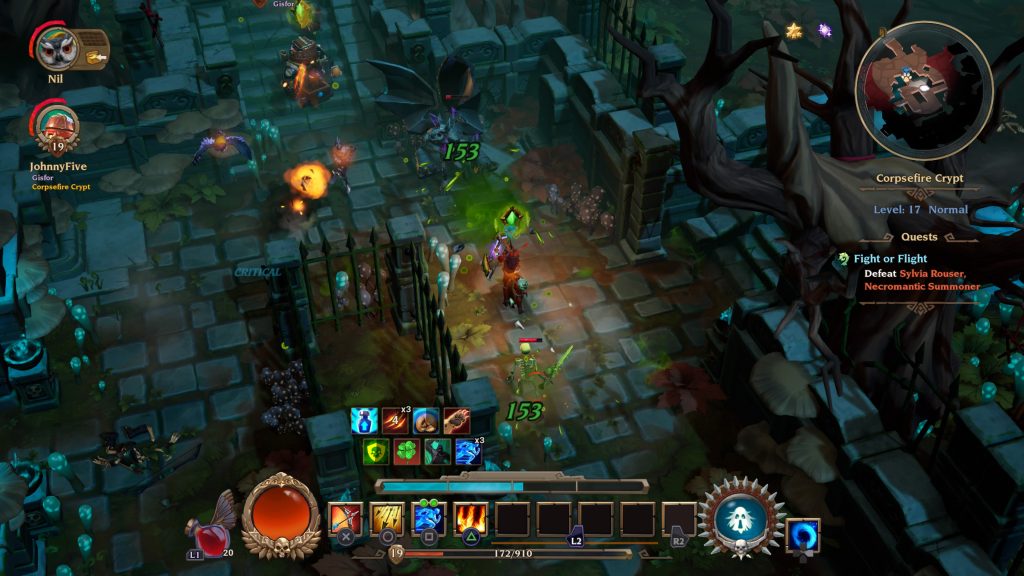 Anyway, before long you’ll be out in the world, exploring those randomly-generated levels, uncovering the fog that is over the mini-map and generally doing that Diablo thing of hacking, slashing and shooting at your foes.  The action is actually pretty good though.  As a sharpshooter, I had to constantly manage distance, picking between my active skills (of which you can map eight easily to the controls) and doing damage.  The game has a way of getting difficult but then pulling it back as your armour improves.  The harder the game is, the more satisfying it is to play and for each session we found ourselves enjoying it.  To a point.

As with any Diablo clone, things can get pretty repetitive and with everything being pretty random, the levels and encounters do lack any real craft and sophistication.  Enemies feel more like fodder than any kind of real denizen in this world but when you get a bunch of them and you’re frantically switching between attacks and wolfing down health potions, Torchlight III can be entertaining.  However, it’s all from the RPG 101 playbook.  Chapter 1 is basically ‘world of goblins’, 2 is about the poisonous creepy crawly types and the third and final chapter is all a bit steampunk which would be a nice idea if Dungeon Siege didn’t have it almost twenty years ago. 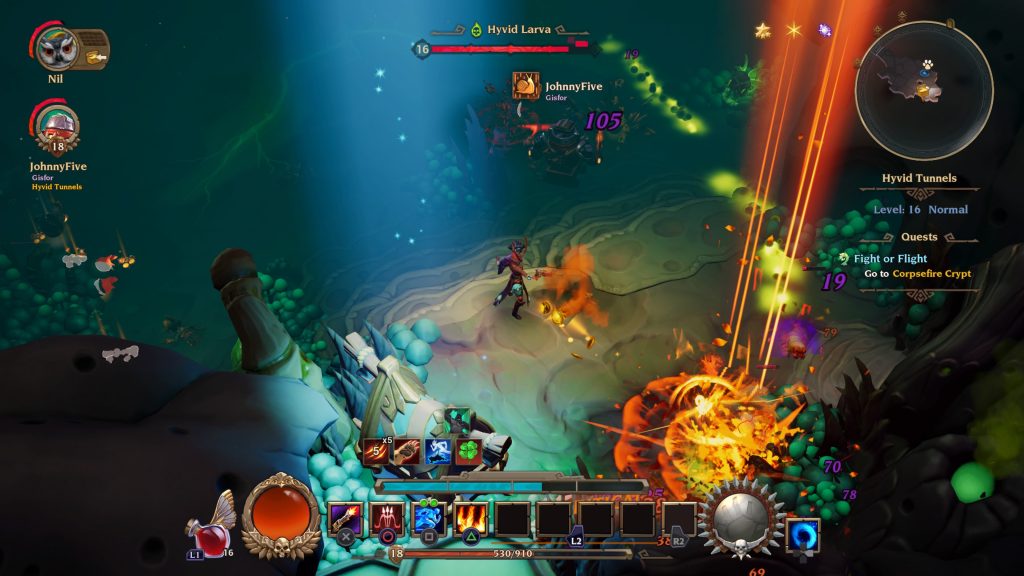 Of course, any game like this lives and dies on its loot game.  Torchlight II‘s problem was that it was almost constantly giving you loot and it was never a massive step up and so was actually pretty uninteresting.  That can be the case here too.  You’re constantly selling gear (or sacrificing it to a hungry tree for a little bit of extra luck) and so it all becomes a little meaningless but very occasionally you’ll get something that is a real step up and that’ll fire off a few endorphins in your brain.

The game does at least keep the pets which were the best thing about the last game.  These little critters are very useful as they do hold their own in battle but can also be loaded up with unwanted gear and sent off to town to sell it.  We like that a lot.   And on the plus side, the game no longer offers you loot that is many levels ahead as it did with Torchlight II.  Now everything you pick up can be used right away. 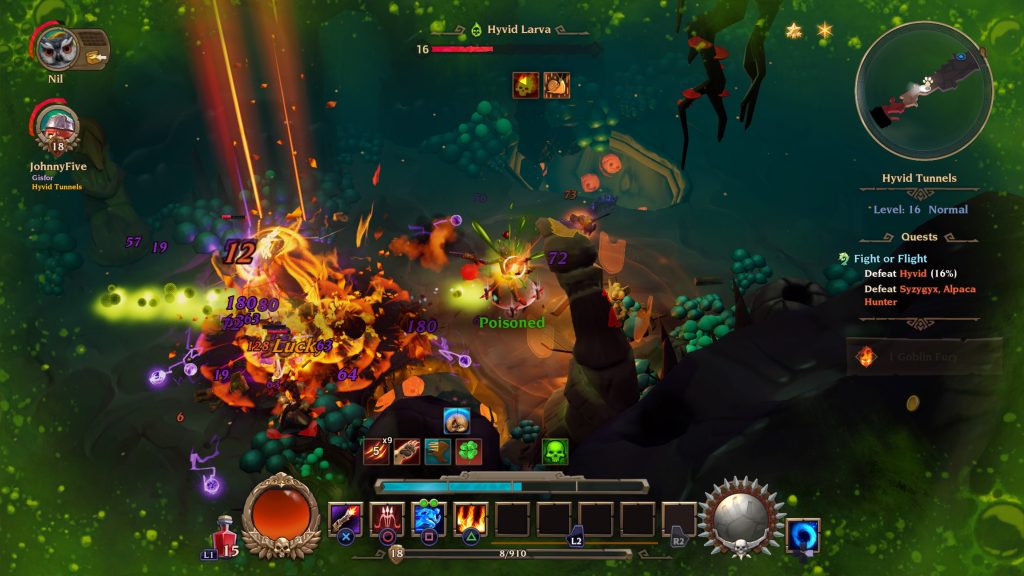 Of course the loot does still have the issue where you’re not always sure what is better.  Is +80 health better than +50 defence?  I have no idea.  On the plus side though, you’re not juggling elemental stats as much as before.  Each of the game’s three chapters seems to feature enemies doing specific damage types (chapter 1 is mostly about fire where as 2 is about poison), so the system is a bit more streamlined than before but Torchlight III‘s problem is that it all feels like a system from twenty years ago.  There’s no innovation here at all, just by-the-book looting.  And oddly the game only offers you the ability to enchant things when you get to the end of an entire playthrough, despite alluding to the ability throughout the game, another example of Torchlight III doing a very poor job of explaining itself.

The problem here is that nothing the game does is done particularly well.  It’s all functional and offers a reasonably solid experience, although I was regularly disconnected from the co-op sessions and you can get caught in scenery or find that a boss suddenly loses interest in you and stops fighting, but the game is so generic that you wonder why it exists and why there are three of them now.  Even the new fort building element that they’ve added is poorly conceived.  You get your own fort to build up with cosmetic and functional items.  The functional ones require you to feed them with items which will give you various boosts but the rewards are pitiful.  Feeding your money tree with loot will eventually, after giving it literally hundreds of weapons and pieces of armour, will give you a measly 5% boost to luck.  Other structures require you to basically genocide an entire race of goblins for a couple of percent on your fire defence. 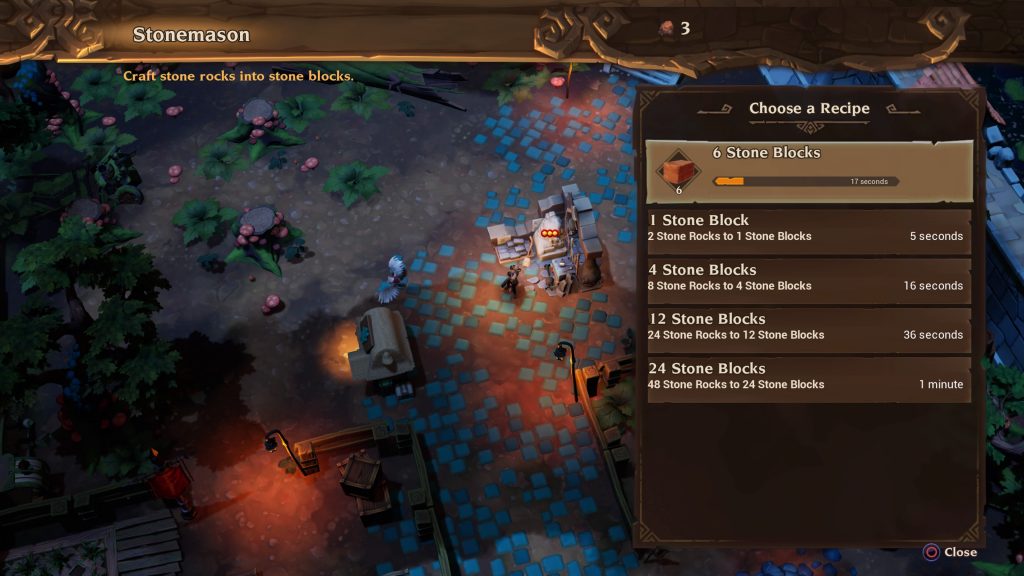 You do get cosmetic items for your fort but these are generally tattered ruins that make it all look like a tip.  The game does occasionally show you the fort of another player but it’s never impressive.

Torchlight III has plenty of problems but its main one is the same as Torchlight II, a complete lack of ambition.  On the plus side, the presentation can be alright with the in-game graphics looking clean and colourful although when the action hots up you may as well be blind.  The game’s isometric viewpoint doesn’t always help as sometimes items and traps can be hidden behind scenery in a way that only happens when you let an algorithm generate your levels.

Ultimately though, after finishing the game’s campaign (12-15 hours) we agreed that it was alright, albeit definitely aided by us playing the game in co-op.  The trophies would have you max out every character to level 60 (a complete campaign on ‘normal’ got us to 47) but the idea of going back isn’t very appealing.  That says a lot given that I just personally sacrificed 100-ish hours to Kingdoms of Amalur.  Perhaps reviewing this action RPG so soon after playing my favourite ever one was a little unfair but Torchlight III‘s shortcomings are all pretty obvious.

Summary
Torchlight III continues the series' cheap and cheerful take on the action RPG stylings of the Diablo series but comes up short on its combat, looting and storytelling. There's fun to be had here, especially in co-op, but nothing about the game stands out apart from some pretty, but messy, visuals.