Torchlight II is a port of a 2012 Diablo clone which was itself the sequel to the 2009 original.  Although the series has always debuted on the PC, Torchlight did eventually make it across to the previous gen of consoles and I played through it on the Xbox 360.  The sequel has now made the transition from PC to console and has landed on the major consoles.  And also the Switch (chortle!).

As with its predecessor, Torchlight II is an isometrically-viewed, top down mix of RPG elements, hack and slash combat and lots of looting.  On the PS4 its main contemporary is the exemplary Diablo III with the main difference being that this comes at the pocket-friendly price of £16.99 and the game does have a few elements that show you why this would be a harder sell at a higher price point.

Unusually for an RPG, the story on offer is really thin.  Gone are the gorgeous cinematics of Diablo III  and instead we have an opening cutscene that explains how the town of Torchlight has been destroyed by The Alchemist (one of the playable hero classes of the original) after he goes a bit mad dabbling with ember, a powerful substance that is probably best left alone.  After that quests are given to you as text and while the occasional cutscene shows up to break up chapters, we found ourselves completely disengaged with the story almost immediately.  To the point where I basically had to read up on it to produce this already thin recap. 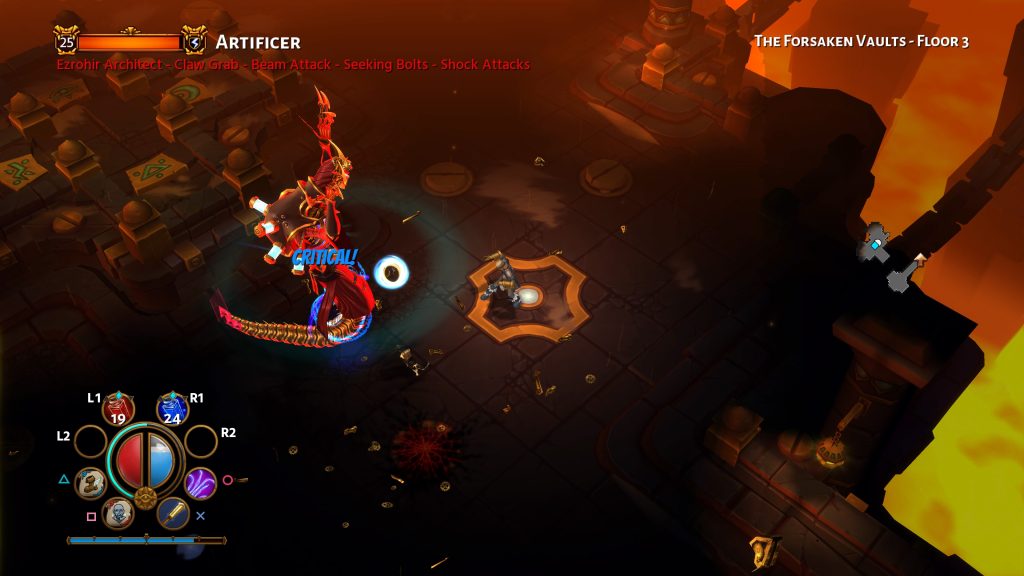 What we can confidently tell you about is the game and what it does well, what it does badly and how it compares to its more famous genre-mate.  From the off you get a choice of four classes.  Not having a sensible re-spec option (you can only undo your last three skillpoint allocations), we read up on it and found that the Embermage was your best option offering a good range of ranged magic attacks.  You also have your up close and person melee class, The Berzerker, the gun-toting Outlander and The Engineer who is your tank class.  So essentially two ranged classes and two melee and all that dabble with a mix of real world and magical attacks.

Once you’ve picked your class and customised your character, and picked a pet, you’re out there in the world and doing all the typical things you’d expect from this type of game.  Firstly, you meet people who give you quests.  The flow of these is fairly linear with most quests being in the next area of the game and you’re usually only juggling two or three of them.  Its easy enough to just follow the main quest line if you’d prefer but the game does offer a significant challenge later on and so skipping opportunities to level up is not really recommended.

As with Diablo III, the game allows you to bind a mixture of attacks to the main eight buttons of the Dual Shock.  The can be melee attacks, spells, potions and others in whatever combination works best for you and while Torchlight II can’t take the credit for the system, it was smart of the devs to implement it.  After you’ve got your attacks and spells sorted, it then becomes a bit of a rotation every time you run into a new mob of enemies as you drop crowd control spells and activate buffs before spamming your main attack button. 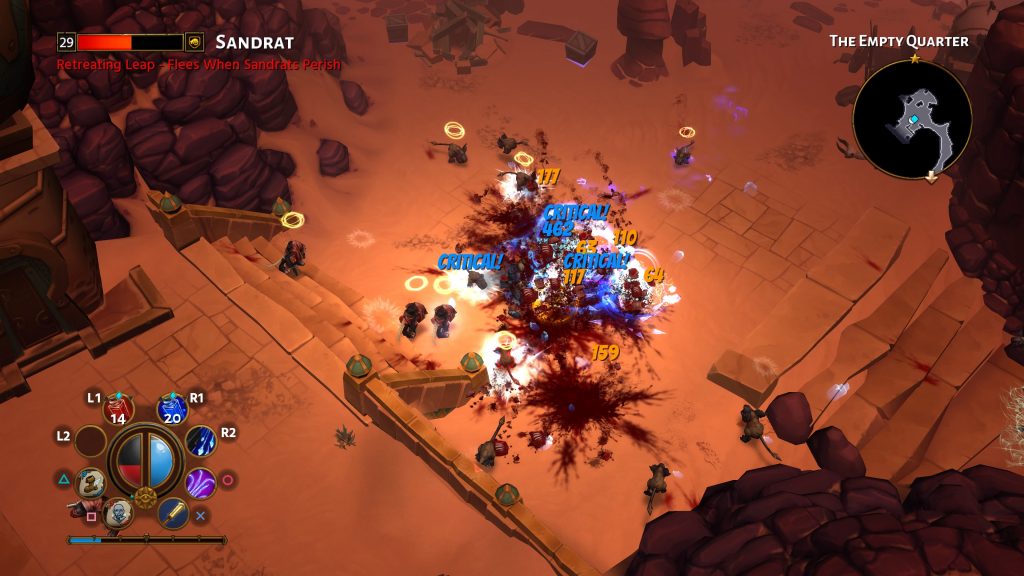 It’s a system that is initially so bread and butter that we were a bit bored but when the game ramps up the challenge, it all clicked and became a lot more enjoyable.  Especially when you start building up your skills and stat points.  The game does use that same colour outlining effect that Diablo III did to highlight enemies but, again, it’s a smart system and one you’d be stupid to eschew.

The main game loop tends to be that you enter and area, find a gate/door/pit entrance/whatever with a guy stood outside asking you to go in a do something at the most inconvenient part of wherever that entrance leads to.  You go in, smash up a few goblins/soldiers/trolls/monsters/whatever, dying a few times along the way probably before facing off against a boss who usually has a bit more juice in terms of their attacks and are usually able to keep the fight going for a while.  They eventually drop, you grab the loot, go out the convenient back door portal and claim your reward.   It’s essentially like clockwork and makes the game feel like a bit of a grind after a while.  Diablo III was a bit like that too though to be fair and your mileage may vary based on how much you like doing RPG busywork and fetch/kill quests.

All the additional RPG trappings are in there.   Loot to find and equip, spells to learn, gems to put in sockets, guys that take gems out of sockets.  The transmuting option from the PC version is missing though which suggest that this is more of a vanilla version of Torchlight II as opposed to any kind of ‘Game of the Year’ type of affair.  But there’s still plenty in there to keep you busy. 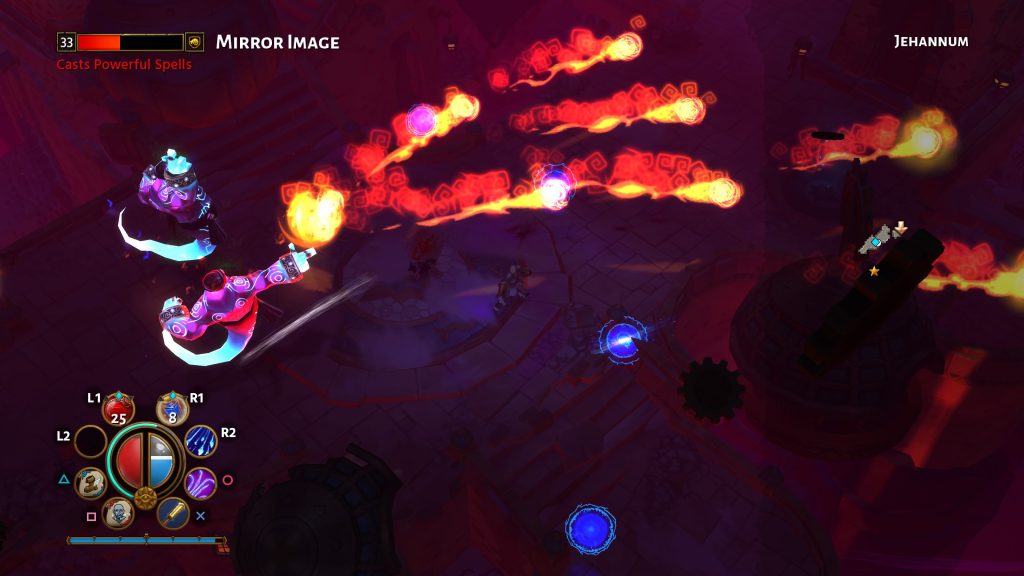 Perhaps the game’s main weakness is its loot game.  To be honest, you can keep your story, we just want a good, satisfying loot progression and Torchlight II doesn’t get this quite right.  There are a couple of reasons why.  Firstly, the game gives you a lot of junk or, worse, a lot of good gear that you’re not able to use until you level up (sometimes as far as like 15 levels which is stupid).  So you’re constantly worrying about what to keep, what to sell and trying to remember that level 17 is where you get to use that glove that now gives you 0.3 mana regeneration per second which seemed like a great deal three levels ago but is now worse than the level 15 amulet you picked up two quests ago and so on.  It just feels constant and unrewarding at times.

Also, the game seems a bit obsessed with elemental damage so while all I want is a bit of health regen and a bunch of extra mana to use, it’s constantly offering me the chance to consider having +13 electrical protection versus +14 fire or whatever.  Diablo III seemed to get this right, as did Destiny, but here we feel like we’re constantly doing an inventory of stuff we’ve picked up and 99% of the time it is either trash or unusable.  Chore.

On the plus side, you can send off your pet to go and sell your junk in town.  Pets are great.  They follow you around being cute and occasionally setting off helpful spells and you can sometimes use a spell to turn them into something a bit more useful in a fight.  We definitely appreciated that, and they get their own loot too which we appreciated. 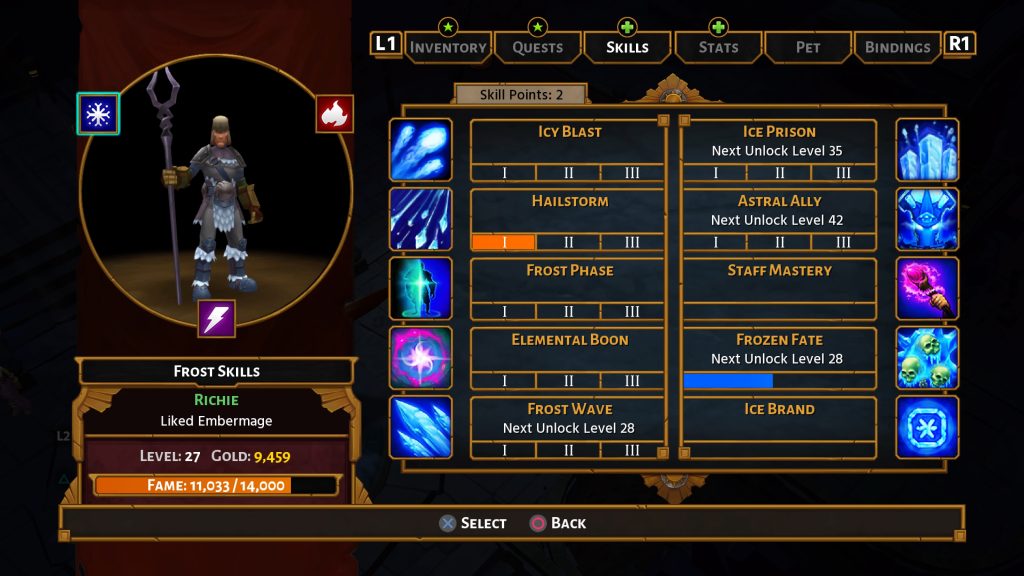 So in summary, gameplay-wise Torchlight II mixes decent combat and average looting to reasonable effect.  But where Diablo III made us want to play it again with different classes, Torchlight II feels more like a one and done affair to us.

In terms of the presentation, the game’s budget roots are fairly obvious.  The visuals have that indie PC game feel to them where nothing seems particularly detailed or impressive.  This is essentially a seven year old game and it does look like it.  It uses colour a bit more than Diablo III did (that game seemed to be mostly black, grey, blue and red) but the creature designs are far less ambitious here and the generic, procedurally-generated environments look bland.  There’s rarely any spectacle to the game and instead it’s just functional.  It’s never bad but it never stands out either.

And so, that’s Torchlight II.  It does a commendable job of offering up a very Diablo-ish experience but when it comes years after that game (which is now usually a tenner or less on PS4), its hard to see why gamers would be drawn to this unless they just want more of the same but that’s okay because it still offers a very competent RPG experience.

Torchlight II
7 Overall
Pros
+ Good combat
+ Fully featured RPG elements
+ Lots of loot
+ Online co-op
+ Pets are cool
Cons
- Very generic
- Looting feels unsatisfying
- Visually average
- Weak storytelling
Summary
As a budget Diablo III clone, Torchlight II delivers a solid chunk of hacky, slashy, looty gameplay and gets better as the game gets harder. However, it doesn't offer any real innovations and seems creatively unambitious even by the standards of a sub-genre that already struggles to break away from its conventions.