Described as a cross between Grand Theft Auto and Syndicate, Mode7’s latest game Tokyo 42 comes to the PS4 after already establishing a reputation on PC and Xbox One.  Being compared to the greatest isometric game ever, and the second best GTA (GTA V being the best) is no joke but can this futuristic assassinate ’em up live up to it?

Early impressions are good.  You start off in your tiny apartment in futuristic Tokyo.  A friend calls to tell you that you’ve been framed for murder and that you need to escape.  This sets up the game’s viewpoint and controls.  The game is seen from an isometric viewpoint (mostly) and as you run from your appartment, chased by the police, you soon realise that your in-game avatar is pretty nimble and able to jump from the highest buildings without dying.  Parkour-style movement is definitely showcased here. 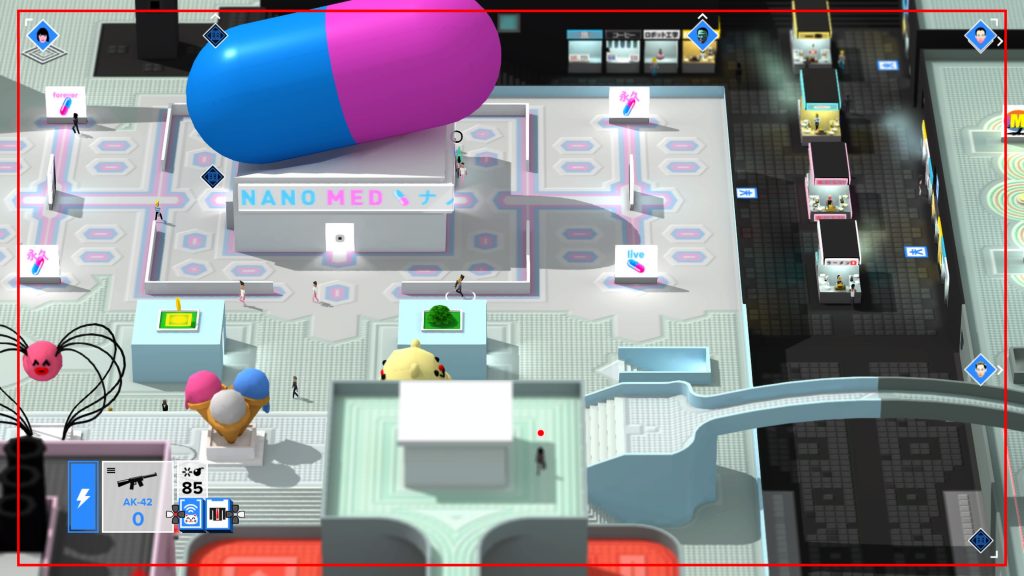 In this vision of Tokyo, murder is pretty rare thanks to NanoMed, a drug that makes death a thing of the past for most people.  So it’s odd that your only path to clearing your name is to become an assassin and kill your way to the truth.  It’s a bit of a storytelling leap and it doesn’t really make much sense and as the plot unfolded, through 2D images and lots of text, I became less and less engaged in it but ultimately it is just a vehicle to get you to accept various story and side missions.

Missions generally involve killing one or more people and you’re reasonably well-equipped to do this.  Weapon vendors allow you to purchase all sorts of weapons but pro players will look to their kitana blade and stealth skills to get the job done.  The game’s trophy set includes a few bitches of the bunch that require you to complete most of the game’s missions without being seen, so stealth is definitely supposed to be your first option.

The problem is that stealth doesn’t always work very well.  Enemies often overlook each other and while they don’t seem to react to seeing their buddies’ bodies, any offensive action by you is generally spotted and responded to with unerring efficiency.  The game will often task you with clearing out an area.  Lobbing in a grenade will usually see the enemies scatter before it can do any damage and the throw a grenade perfectly at your head from thirty yards away while you are behind cover.  Likewise a sniper shot from as far out as you can make it will generally stir up the entire base.   And your target will probably move out of the way as well. 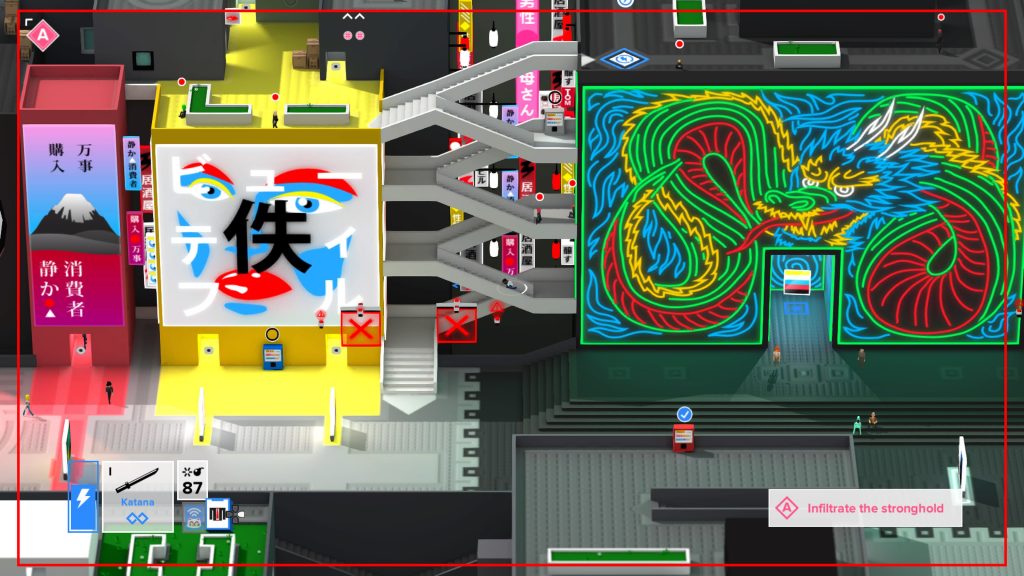 However, when you can make the stealth work (usually by taking out enemies one at a time as they stop being overlooked), the game can get very satisfying.  Also, you do have enough assault weapon options if you fancy going balls out and killing everyone.

As the game progresses, you’ll get into harder and harder missions and the game throws some interesting new elements at you such as giving you a motorbike but ultimately missions generally involve passing through lots of guards in order to kill a single guy, or just kill everyone.  At times it works well.  Picking off guards one at a time with your katana, or scaling the windows of a tower to get to a target definitely feels good but sometimes you’ll have everyone moving in a massive group, making stealth kills impossible and given that sometimes an enemy will get dropped by your sniper rifle while other times he’ll see it coming and will alert everyone, it all gets a little frustrating.

It’s good but combined with the slightly floaty feel of your character and the overly fussy aiming which makes picking off enemies a bit chore, the lack of precision and consistency can grate a little.  Also, the viewpoint is zoomed way out so sometimes it is hard to tell which direction a guard is looking in.  It’s all a bit irritating.

On the plus side, the game does have a little of that Syndicate feel and running around this colourful, crazy version of Tokyo is quite exciting.   The view can be rotated and the level of detail is quite impressive in the same way that Syndicate was all those years ago.  The setting is extremely pretty, although the ambient soundtrack lets the presentation down a little. 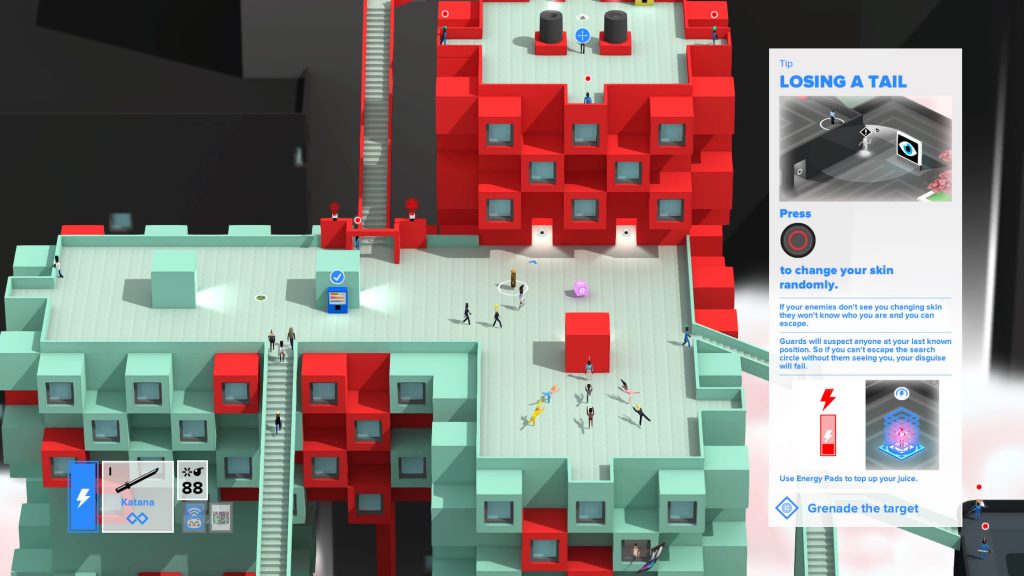 Ultimately, the game maybe is guilty of favouring style over substance.  We’d have liked to have seen some of the upgrading mechanics from Syndicate as well as some squad-based play.  Instead I found myself favouring weapons that are introduced very early on in the game and I never really felt as though I was adapting my tactics very often.

There’s enough good stuff in the game to make it a good game though.  Tokyo 42 feels pretty unique, despite its influences, and at least its not a 16-bit rogue like.   I’ve enjoyed the time I’ve spent with the game for the most part.  Some missions felt unnecessarily difficult as they didn’t seem to suit the mechanics of the game, but most felt pretty good and ultimately I applaud the devs for what they’ve tried to do.

Tokyo 42
7 Overall
Pros
+ Really attractive visuals
+ A nice parkour-based twist on Syndicate
+ Stealth is good when it works
Cons
- The game isn't set up well for combat
- Some missions make stealth very difficult
- Aiming is a bit suspect
- AI avoiding sniper shots is annoying
Summary
Tokyo 42 is a brave stab at bringing some Syndicate-style action to the modern consoles. It has moments where the great graphics and stealth gameplay come together to create some good times but the stealth mechanics aren't always that reliable and therefore the gaming can become inconsistent.