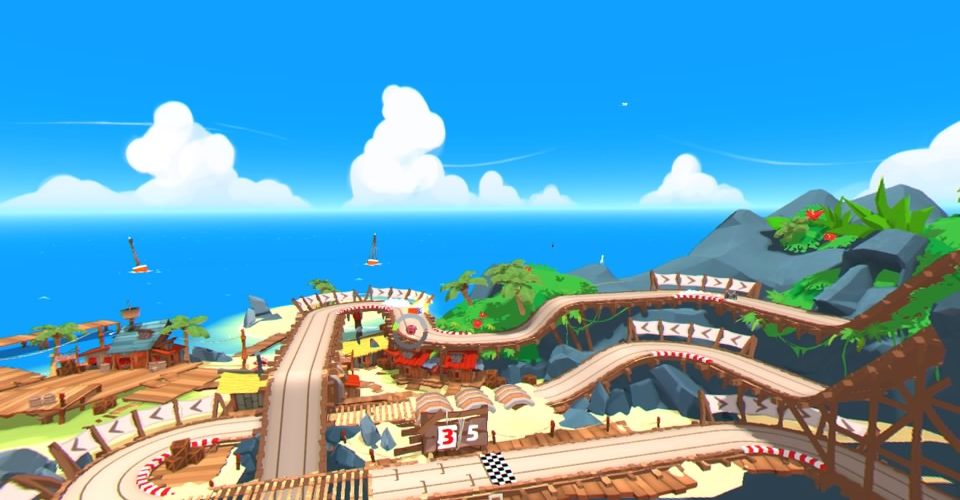 We’re always happy when a dev team that we respect adopts the PSVR tech and when FuturLab announced Tiny Trax, we were chuffed.  Aside from their very well received Velocity games, we also lost a fair bit of time to Surge Deluxe which an underrated puzzler for the Vita.

This time around, the Brighton-based crew have brought us a genuinely unique game.  Tiny Trax takes slot racing (Scalextric as we know it over here) and literally turns it on its head.  Unlike most VR games where you are part of the action directly, this is essentially an overhead racing game in the style of Micro Machines or Super Sprint but untethered from the 2D plane. 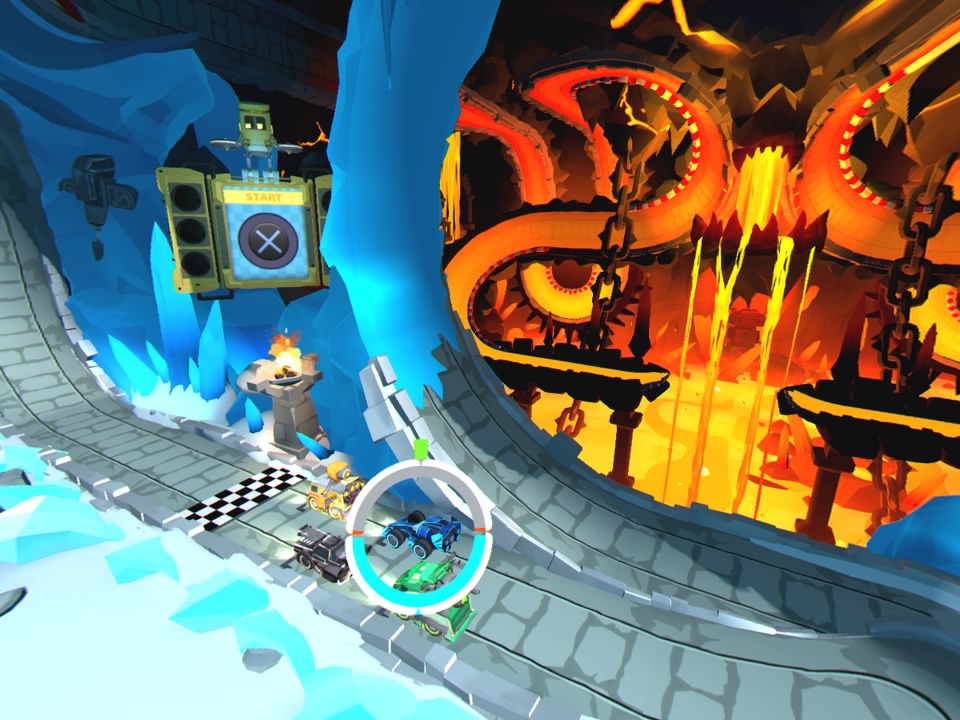 The game offers four car races on tracks that go up, down, along walls and upside down around you.  You are sat facing the action, much like you would be with a real slot racing track but you’ll be using all of your neck muscles to keep up with the action.  It feels comfortable though and is such a simple and natural way to play that it makes you wonder why no-one else has thought of this before.

The racing action is relatively simple to understand but has some room for error.  You can accelerate, steer (so it’s not really a slot car racer even though the game has you running along two slot tracks) and boost.  When you take a corner, you have to judge how much to steer.  Too little or too much and you’ll lose speed.  If you can just push it a little more than is natural and you’ll earn some boost which you activate by holding X. 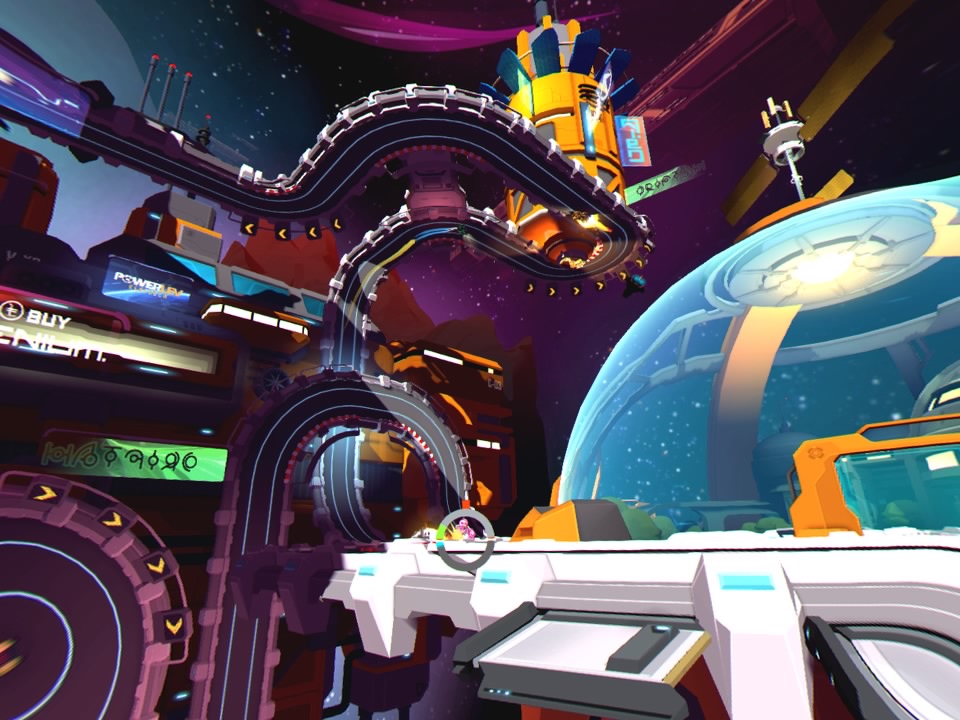 It’s a basic system but one that enables good players to really refine their technique and set some amazing times.  The only downside to all this is that the AI is just too challenging initially and this will put off many players.  We’d have liked to see some difficulty settings in order to coax the player along towards getting good and as the tracks get more complicated, you’ll realise that one misstep will can ruin your race which makes you realise that the key to success is learning the tracks.

It takes a game style that should be very intuitive and relaxed and makes it somewhat unenjoyable.  Persistence is the key but given that the game is limited to just twelve tracks, there’s not much longevity on offer here.   That said, this all comes at a very reasonable price and players who master the game are going to have played the hell out of it. 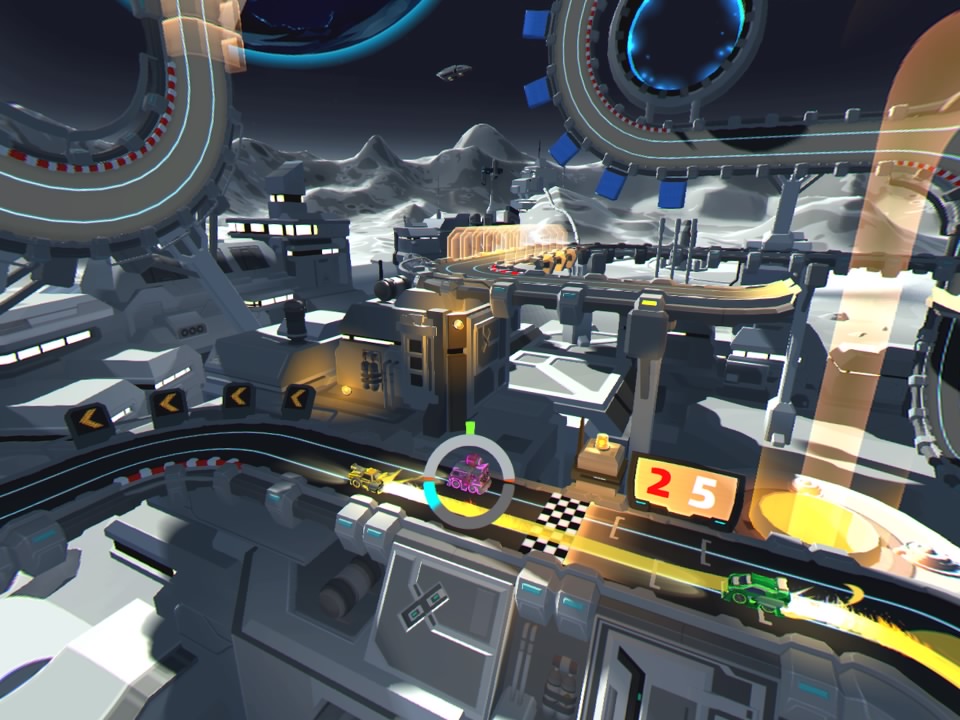 On the plus side, the game offers online play (although it’s a tad barren out there in the lobbies) and visually it looks great.  The tracks are set across a tropical/pirate based environment, a fire and ice volcano setting and finally a futuristic space one.  It looks good and the track design literally has the action playing out around your head.  Sometimes the game trades visual drama for track visibility and that’s a mistake but as far as VR games go, this one feels like it makes good use of the tech.  Especially when you lean forward to look through loops in the track or duck down to dunk yourself underwater.

Ultimately, we wanted to love Tiny Trax.  We love the idea, we love the use of VR and we hope to eventually love the game itself but after a few days with it, we’re not really enjoying it.  Patch in an easy mode or at least just level out the AI and we’ll be very happy.  Until then we’re a little bit too frustrated to recommend the game to casual players but if you’ve got the skill, or persistence, to take on the challenge, and a PSVR headset, then this is well worth a look.

Tiny Trax
7 Overall
Pros
+ Great use of VR
+ Very inventive tracks
+ Easy to grasp gameplay
Cons
- Really needs some difficulty settings
- Just twelve tracks
Summary
Tiny Trax is a racing game that uses VR in a brilliant and clever way. There's not much content here though and the single player campaign can be just too unforgiving which is at odds with the game's cheerful atmosphere.