Coming from one-man effort Romans I XVI Gaming, Tiles is quick-fire puzzler that’s simple to grasp. Coming to consoles almost a year after a steam release, this stripped back brain-teaser is hoping to garner new fans with co-op and a map editor as part of the package. 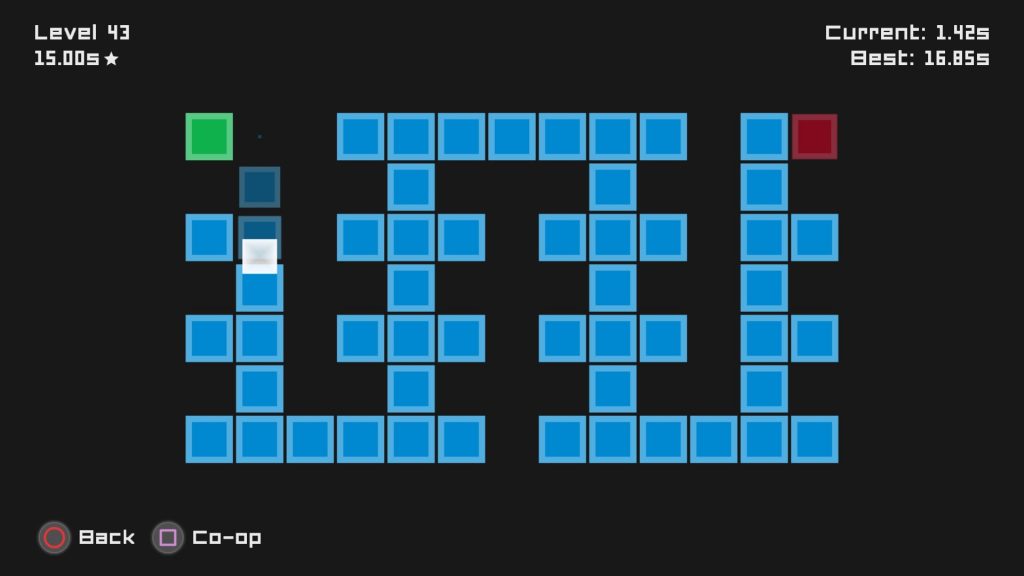 Your objective is to reach the red block after clearing the floor entirely. Across ninety puzzles, you’ll be introduced to different tile types which operate differently. The most common of these are dark blue tiles which vanish shortly after traversing them. Their temporary appearance means you are always moving along the field of play at a consistent, brisk pace. Time is such a factor in this game and the puzzles have all been considered with that in mind. Other blocks, such as the orange bridges, activate in cycles. They force you to consider when it’s safe to cross them whilst comprehending how long the ground beneath you will remain.

Controls are confined to the d-pad. It actually works well with the tile-based levels as you move from block to block. It allows for you to be precise and responsive and, provided your thumb is up to the task, nimble. It portrays a sense of fairness to Tiles which works well in its favour. If you fail a puzzle, it’s down to your inputs and speed, rather than luck. Each level is quick to restart and are usually over in less than a minute. It presents a small time investment than can, occasionally draw you in. 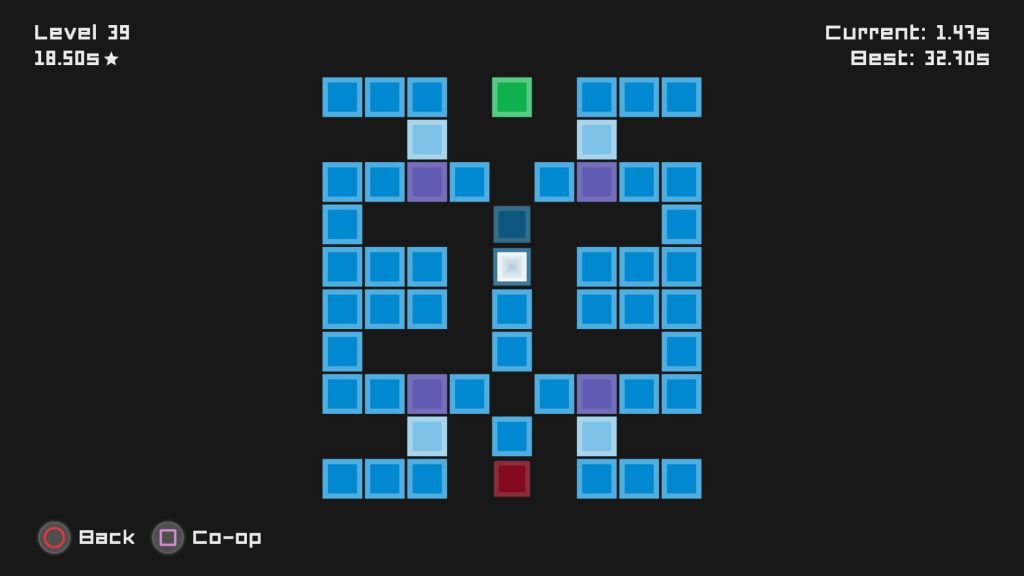 There is a constant feeling that each arena is a threat to your existence but purple and light blue blocks do allow for some respite as you think about your next move. All the mechanics are brought in pretty quickly and are easy to understand. They can be combined in some fiendish ways but Tiles does front-load their inclusion. After the first tier of puzzles, you’ll have seen them all. This is a shame as the mechanics all become familiar and a little stale far too soon.

Generally, the learning curve is gradual but you do see sections where the difficulty takes a breather. It’ll vary depending on your ability to plot a course through each test. Played in smaller doses, the game’s main campaign can be shuffled through relatively nicely but there does come a point where Tiles runs out of steam. Levels become longer and more complex with your dexterity pushed to its limits. Being such a kinetic game, I found myself exhausted by some of the tougher challenges. 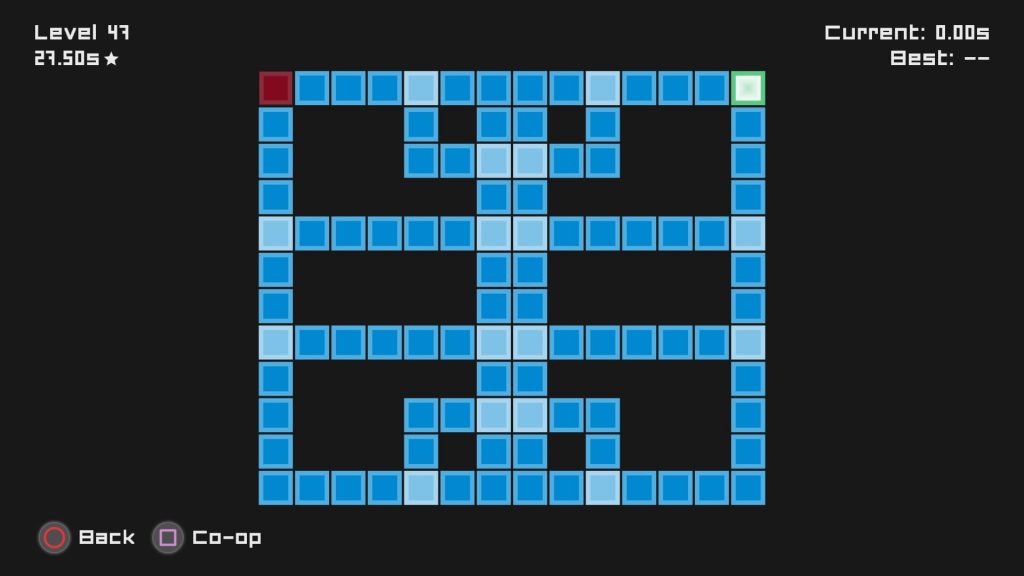 It helps that you can view successful replays on the leaderboard prior to tackling a level so, if you’re stumped for a solution, one is always available to you. Some puzzles offer more than one solution but the fact all are timed always gives you a sense of urgency. It’s compelling to dive right back into a trifling puzzle and it’s rewarding to see success come just in the nick of time.

The map editor could provide some longevity to Tiles. It’s simple to use and understand and reminds me of Mario Maker in how the player will instinctively know what tools are at their disposal. You can create some tricky timing challenges with it and there’s plenty of levels already available for you to try out. You can also open up your creations to be viewed by both console and PC players which is a nice touch. Finally, there’s competitive local co-op which is smartly implemented for those that want a head-to-head experience. 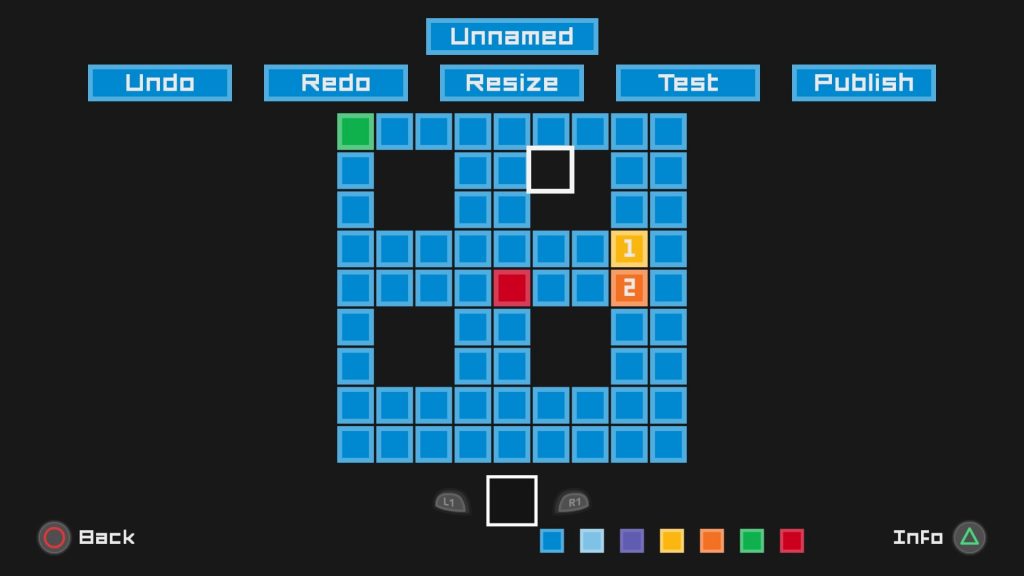 Presentation is kept simple with very little in the way of distractions. You have a level set amidst a black backdrop and a single musical track which, whilst catchy, does loop infinitely. It’s not too intrusive but it doesn’t really offer much variety. It’s stark and can ultimately start feeling a little bland. Sound effects are kept to a minimum to indicate either a successful completion or failure of a trial.

As you can tell, I feel mixed on Tiles. There is a fundamental compulsion to tearing through the game’s blocky exercises but my enthusiasm is dulled by the repetitious nature of the game’s many levels. It feels like a game that showed its hand very early and, as a result, the game can’t stay fresh and exciting for long.

Tiles
6 Overall
Pros
+ Simple to grasp.
+ Controls are responsive and movement carries a great rhythm.
+ Levels become increasingly challenging with multiple solutions.
+ Map editor and co-op adds longevity to a cheap package.
Cons
- Barebones presentation.
- Campaign starts to wear thin far too soon.
Summary
There's a simplicity and rhythm to Tiles which makes it an enjoyable, cheap puzzle experience. The reliance on the player's dexterity can lead to some frustration but not at the game's expense. Whilst the challenge does ramp up, the swiftness that new mechanics are introduced leave the majority of the game's levels feeling increasingly stale. A lot of the early momentum starts to dissipate and, whilst the level creator helps foster a community and longevity, I'm feeling a little worn out.