Back in the 90s graphic adventure games were all the rage and Ron Gilbert and Gary Winnick worked at Lucasfilm Games.  As part of the team responsible for some of the best of the genre they worked on The Secret of  Monkey Island and Day of the Tentacle to name but two. Eventually though adventure games fell out of fashion as more powerful home computers allowed for more action focused games. Fast forward almost 30 years and adventure games have had a bit of a resurgence and Ron and Gary are back with another adventure game purposely designed to look like a lost Lucasfilm Games classic. 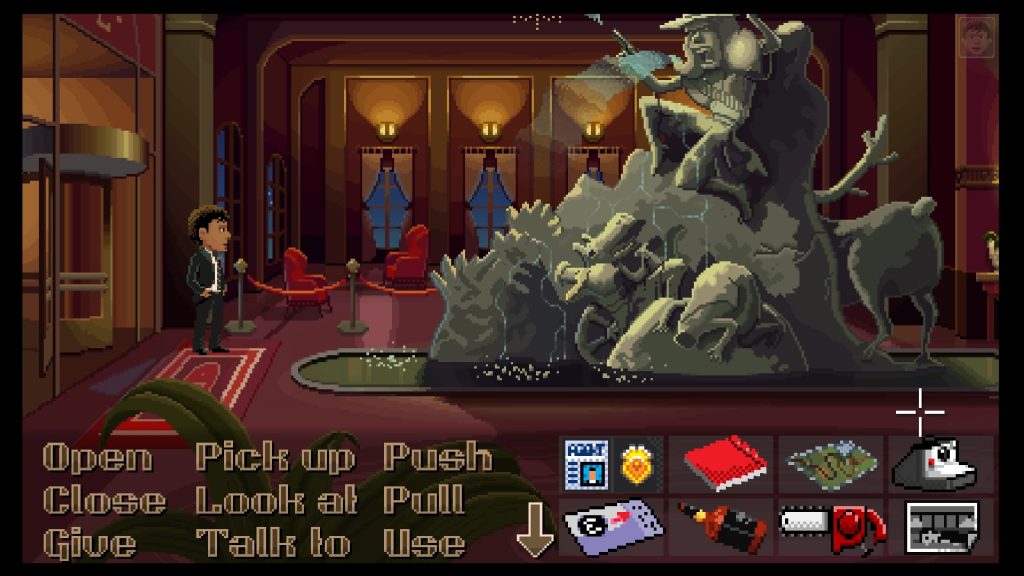 I’ve played a load of modern adventure games and often they change the way you interact with the world.  Some will have direct analogue control stick movement whereas others will have context sensitive buttons for everything.  These changes aren’t always for the best as they can sometimes confuse matters, putting your inventory on a pop up menu for example. By sticking to the traditional Lucasfilm Games approach you’ll know exactly what to do if you’ve ever played one of the original releases, although if you’ve never played one you may be left wondering why everything is so low res.

In practice then you navigate the world with a pointer and a verb box which allows you to interact with everything, things like ‘open’ or ‘push’. The graphics are also straight out of the 90s and are lovingly created pixel scenes and characters. This is no homage though, the work and technical knowledge that had gone in to this game is exactly as it was all those years ago. Thimbleweed Park truly feels like a lost game.

As with all adventure games the star of the show is the story and how this is delivered. The script and voice acting is great and full of humourous lines and comedic characters.  Within the first couple of hours I’d met characters who’d made me laugh out loud and seen countless environmental jokes and throwback gags which I found hit the mark pretty much every time. The story is complex and full of layers with many angles of the story being covered in flashbacks or viewed from different characters perspectives.

The story follows two detectives as they investigate a murder.  Little is know about the victim and the detectives, and it is through discussions with the local town folks that the full picture emerges. Before long three other playable characters are introduced and you are free to swap and change who you control whenever you like.  This aspect of switching characters adds a great deal of variety to the game and to the puzzles, things can get pretty complex. It reminded me of the character swapping in Day of the Tentacle but extrapolated further to a natural conclusion. 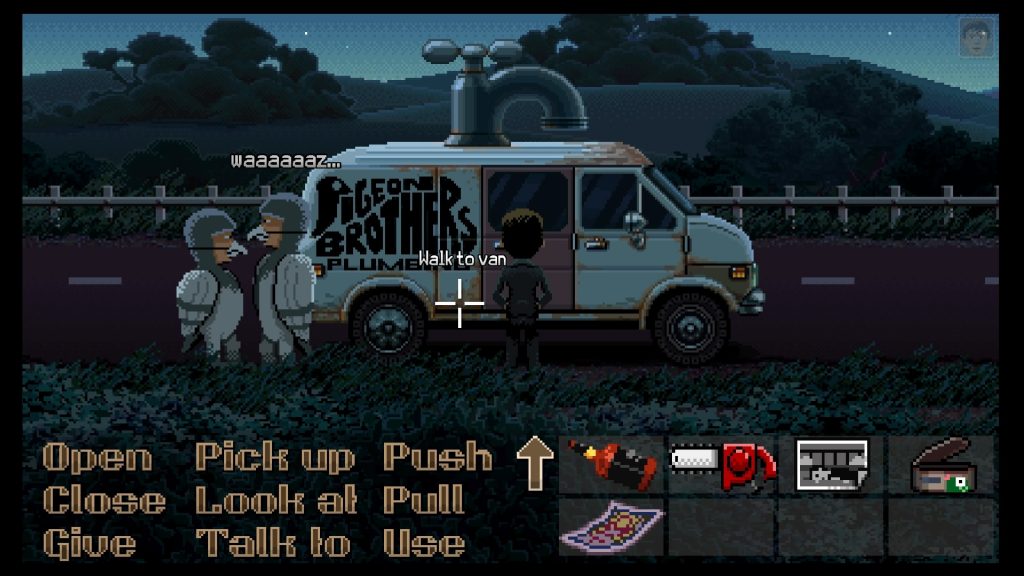 The puzzles are definitely traditional and manage to have a decent level of challenge to them without being too obscure. Each character has a to-do list which basically acts as your rough guide to the game, specifics of what you need to do to tick these off isn’t known but it is a nice way of checking off your goals. As a gesture to the console market there are also in game hints, but excellently you have to phone an in world hint line to get them. I found myself not wanting to use the hints as exploring the world was so much fun. The town of Thimbleweed is rich in detail and varied enough to feel like a living breathing town.

Thimbleweed Park started life as a Kickstarter and as a result is clearly built for the fans. It doesn’t challenge the adventure game genre much, but this is totally to be expected.  As a result this isn’t necessarily going to attract a new audience. In what feels like an effort to attract new players it does include an easier difficulty setting though, which simplifies some of the more difficult puzzles, and very much puts the focus on the story.  This is a nice inclusion but I remain unsure if this alone will work to entice new players.

Throughout the game there are many in jokes and acknowledgements to the fan base.  The library is populated by books written by backers and you can call backers from the phone directory and listen to their answer machine message.  There is also a running gag of picking up specs of dust which calls back to the sometimes pixel perfect selections needed in the games of yesteryear. 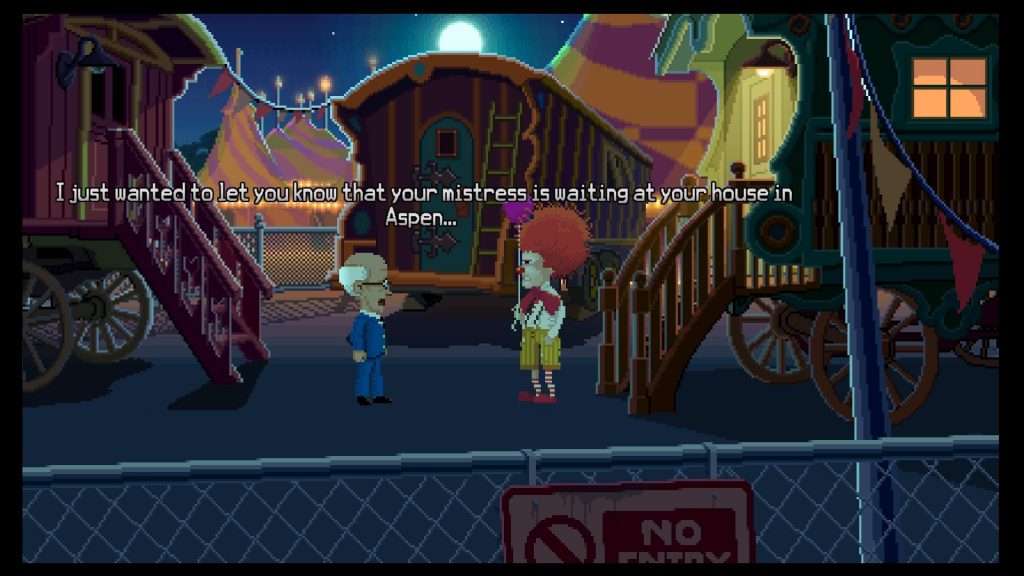 Overall then Thimbleweed Park feels like a masterclass in making a point and click adventure game. The story is excellent and full of humour and unexpected developments and the puzzles are well thought out and challenging. It feels almost exactly like playing a Lucasfilm Game from yesteryear and this is the highest praise I can give it.

Thimbleweed Park
9 Overall
Pros
+ Excellent story, well voiced and well acted.
+ Great puzzles
+ Perfect throwback to the adventure games of old.
+ Genuinely funny.
Cons
- Does nothing to the genre to entice new players.
- The old school graphics and format will put people off.
Summary
Thimbleweed Park feels like a masterclass in making a point and click adventure game. The story is excellent and full of humour and unexpected developments and the puzzles are well thought out and challenging. It feels almost exactly like playing a Lucasfilm Game from yesteryear and this is the highest praise I can give it.