For those of you who aren’t too keen on eating your greens, The Walking Vegetables might just be for you. It’s a twin-stick shooter that tasks you with juicing far more than your five a day using various guns and melee weapons. However, as the title suggests, these veggies aren’t going to sit around in the fridge waiting to be blasted instead they are hording up and looking to kill you first. Which is fine, but why oh why did they not call it The Walking Veg?

Anyway, these veggies are part of an alien invasion and it is down to you to stop them. To do this you have to work your way through each level’s map, one grid square at a time. Go in, clean up and move on. Enemies teleport in, making this feel more like a wave shooter than a typical twin-sticker but once you clear an area it stays clear. 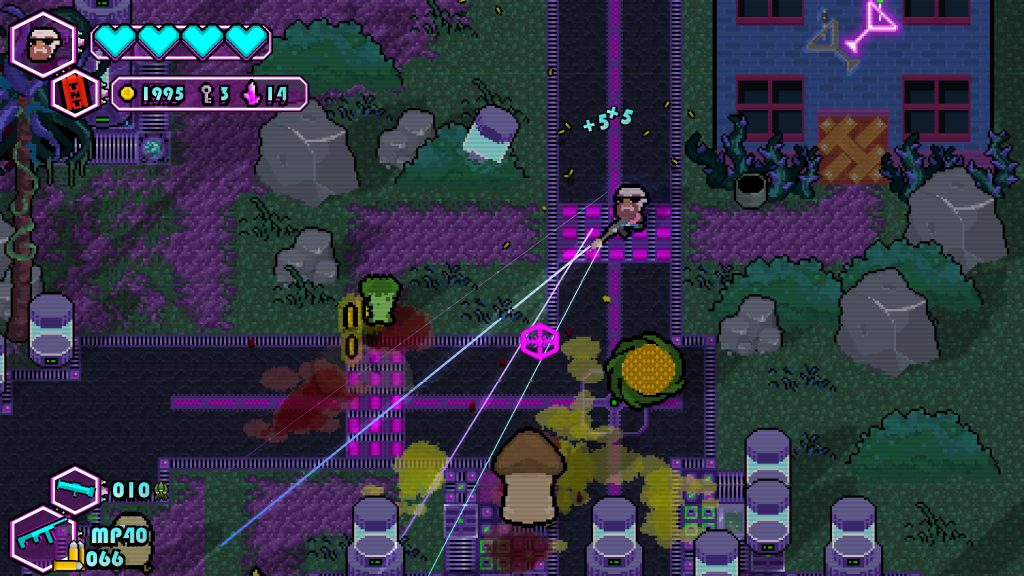 and you have a melee attack that is mapped to

.  You can use these to keep the horde at bay for a while but before long you’ll need start upgrading your arsenal. Rifles, grenade launchers, RPGs and all other sorts of weapons show up and you can carry a lot of them and select them easily with the handy weapons wheel that is mapped to

You can buy extra weapons with money that is dropped by enemies but it is more rewarding to find them as loot and this happens quite often. Like most roguelike games, the key here is to clear out a level and explore it looking for as much loot as possible before you tackle the big boss and that pays dividends here, especially when you explore the various houses that are found in each level. 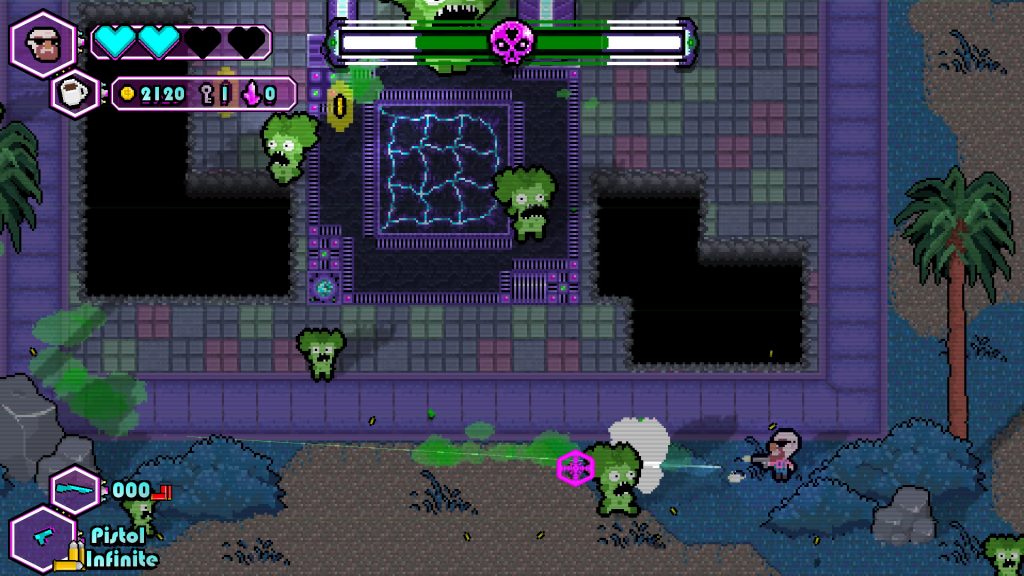 The reason why you want to put in this extra work is the end of level boss battles. These are significant tests with some of these battles being particularly intense. Going in there with the basic pistol is going to be an issue but if you can go in with a machine gun and a rocket launcher, things get a little different.

These battles are a nice change from the standard action which can get a little repetitive over time but they can be a tad punishing, especially when you get to the end boss.  They generally involve a large boss with plenty of tricky to avoid attacks and a bunch of minions making your life miserable.  Practise makes perfect for sure but when you die a peasant’s death on the end boss having gone in with full health and enough guns to stage a military coup, it’s a bit frustrating. 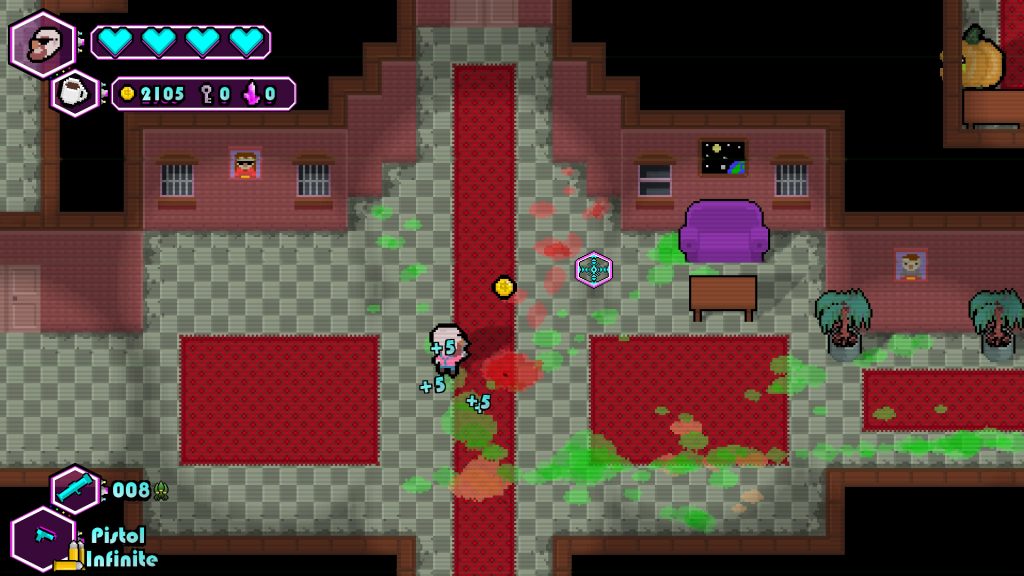 A campaign consists of three levels.  Each level is randomly generated which, for us, is a weakness as we do prefer actual level design but once you get past that it’s not too bad and the action is enjoyable enough, and the rewards good enough, to keep us interested. The range of weapons on offer, both primary and melee, are also enough to keep you trying them out in order to find favourites. After really being disappointed with Dick Wilde 2’s weapon progression, we found the guns on offer here were excellent.

When you die, you go back to the start, with your basic pistol, and that’s a little bit galling at the end of a decent run but there is a little bit of persistent upgrading here too which we like.  If you can complete challenges you’ll earn a perk that is permanently available.  There are many to earn and they offer rewards such as starting with extra health, attracting pick ups, taking off a chunk of boss health and so on.  They aren’t easy to do, but if you can you can give yourself an advantage.

A run through the campaign can be completed in as little as 20 minutes (with a lot of skill and luck) so this isn’t a massive game.  The focus here is on replayability and while that’s okay, there’s not really that much variation in there and so players may find themselves getting a little bored of the game.  Local co-op helps a little if you’ve got someone to help you out but there’s no online play. 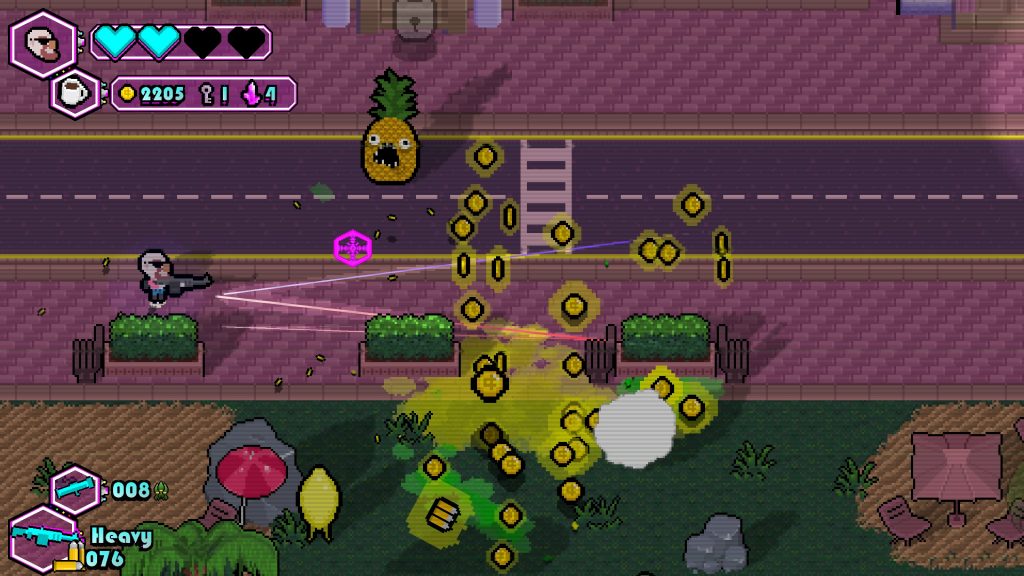 Visually this is a very colourful game with a cartoony, retro style.  It’s not a great looking game but the aesthetic works although if you’re bored of the whole 16-bit look, then this won’t be to your preference.  The animation is pretty basic too and the three levels that you get aren’t particularly full of character.  While being kind of retro too, the soundtrack works a bit better as it has a nice electro synth soundtrack and some squishy sound effects.

Overall, this is reasonably good fun but the time it’ll take to really unlock everything is not the sort of time that most gamers will want to put into a game with such basic design.  Especially as the gameplay is somewhat one note all the way through.  And while it controls fine, looks okay and plays alright, the game doesn’t excel in any area.

As one of just soooo many retro-looking roguelike twin-stick shooters, the main problem for The Walking Vegetables is that there’s just so much choice out there.  Enter The Gungeon offers better gunplay, Neonchrome and Jydge have the better upgrade systems and Iron Crypticle was just more fun but The Walking Vegetables does have its place in there but is maybe just one for the hardcore fans of this particular sub-genre.

The Walking Vegetables
7 Overall
Pros
+ Lots of weapons
+ Good upgrading elements
+ Offers a good challenge
Cons
- Retro-styled visuals are a little tired
- The gameplay isn't all that exciting
- Short but has a reliance on grinding
Summary
The Walking Vegetables is a fairly average twin-stick shooter that is elevated by a great selection of weapons and upgrades but is let down by tired visuals and samey gameplay.