Frogware’s output marks them as something of an adventure game specialist. Working almost exclusively with Sherlock Holmes titles, they’ve now swapped the deer stalker for some Eldritch tentacles. The Sinking City substitutes Victorian England for Massachusetts with some Lovecraftian horror thrown in. It’s well-trodden lore but what’s delivered is a scrappy but endearing effort. 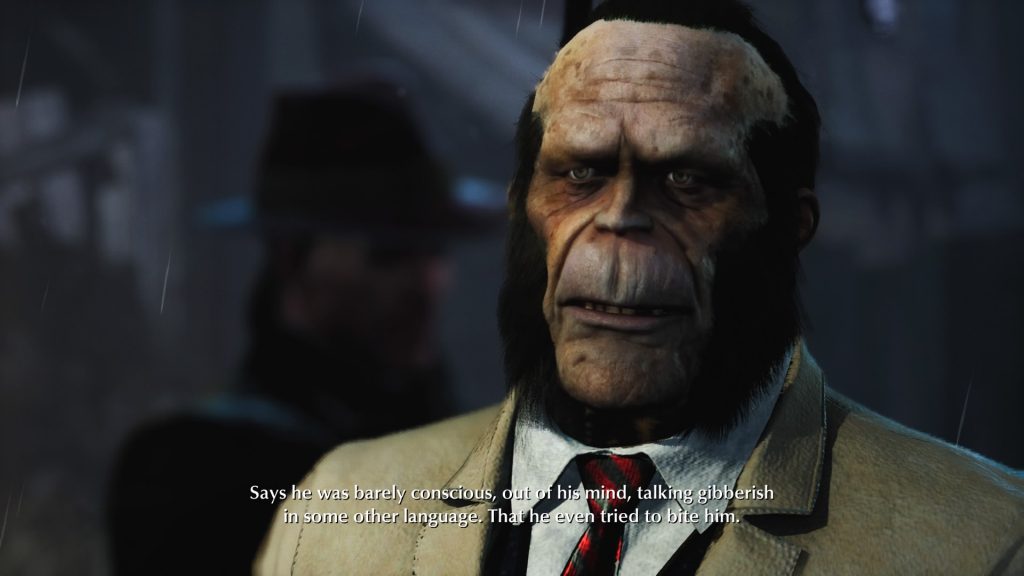 Taking place in a recently-flooded, isolated city, you play as Charles Reed. He’s a private eye hired to investigate a recently doomed expedition which quickly leads you discover some Oakmont’s major players and social dynamics. You also have more personal mysteries to solve with persistent nightmares proving a problem for our hero. The story is told well through some decently written conversations and plenty of leftover notes. You have plenty of people to see all with their own troubles and history. There’s compelling reasons to dig a little deeper with the overarching story rearing it’s head soon enough. Inspiration is played very much up front but it’s written with some depth.

The Sinking City’s lack of polish shows up throughout. Textures pop in, loads are long and plodding. Frame-rate can become erratic and you’re given a fair impression the game could come apart at any moment. For a world so well realised, it’s not well built. The open-world structure might have given Frogware some unwanted problems with the game holding together better during indoor segments.

Sound fares a lot better with voice acting being serviceable across the board. Some performances are great and Reed’s gruffness fits well. Monster noises don’t exactly terrify but they make their presences felt and there’s a definite feel with the chatter of the townsfolk that there’s been real attempts to make Oakmont appear like a lived in space. The open-world doesn’t feel unnecessary and the times where you’re hunting for address can have a real door-to-door quality. The city feels consistent with the coastal edges giving way to more built up areas inland. It’s moody, rundown and feels appropriately darker in tone. 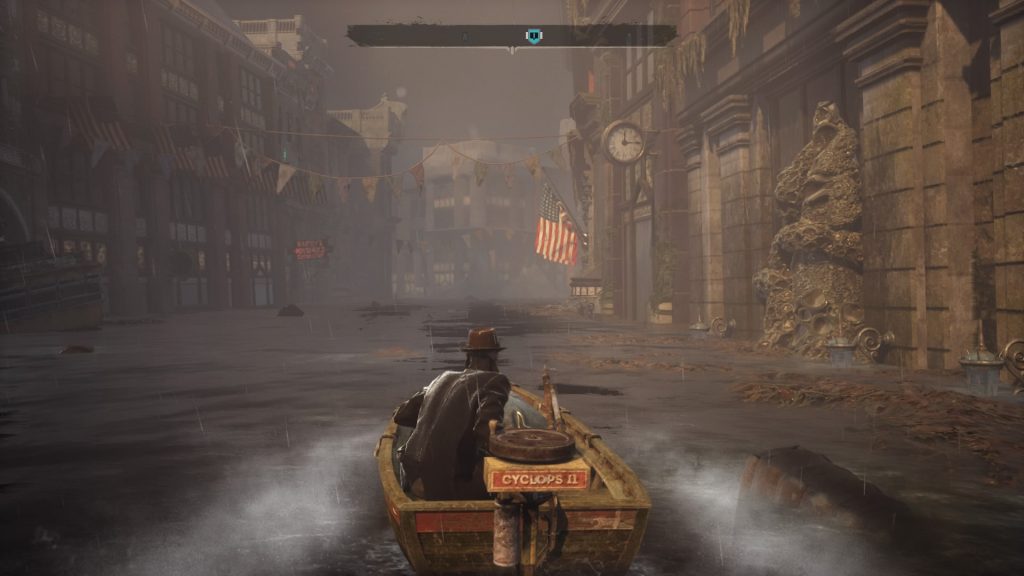 Some streets are submerged without truly turning Oakmont into a Venetian nightmare. You’re hopping from boats to on-foot sections but always moving forward and navigation doesn’t feel like a chore. The integration of the map is very helpful. Pinning clue locations on the map is an important step of the process with most of the clues your given pointing directly to the solution. The world isn’t massive but fast travel points do uncover to allow a little less legwork. Pity it’s accompanied by more load times.

The overall adventuring feels fantastic and methodical. There’s a process to it which can feel routine and stepping into a crime scene can feel familiar and businesslike as you go through the motions. They’re small in size so you’re not trawling a vast space for points of interest. You’ll spend most of your time sneaking into apartments or hideouts looking for tracks or clues to someone’s whereabouts. Searching for evidence flows relatively well and you’re tipped off once all the key items are found.

From what you’ve gathered, you can then deduce possible motives and outcomes. It manifests itself in a rather nifty flowchart that ultimately leads you towards conclusions about just who did what. It’s a very literal way of showing how cases can branch, too. You can decide to go lenient on crooks, turn them in and side with key suspects. It makes replaying the game feel worthwhile to see alternative outcomes. 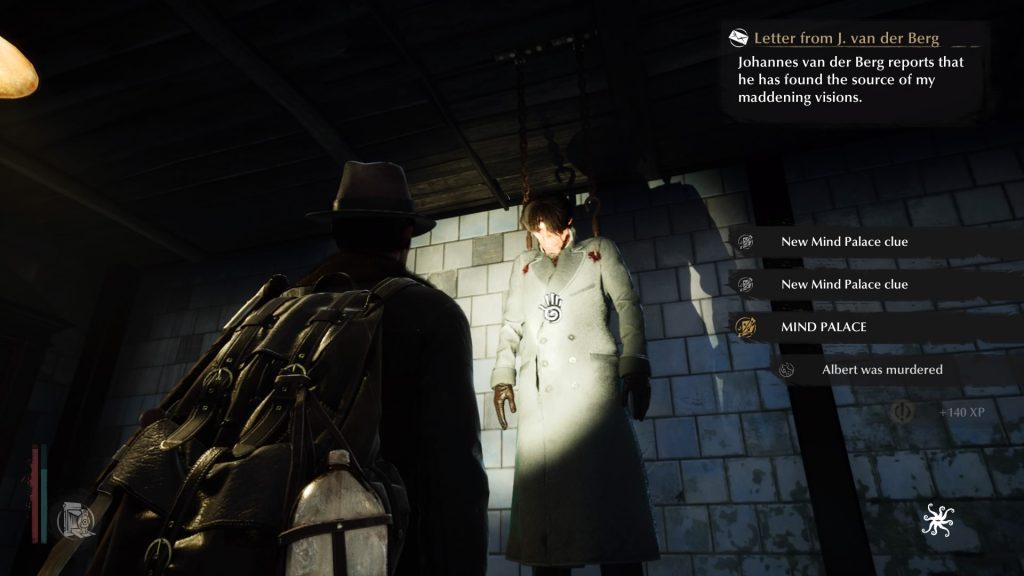 The final trick of Reed’s arsenal is a vision mode which leads him to see hidden passages, objects and helps piece together past events. These can be fun little exercises in logic. You’re given snippets of an event like a fight or meeting and have to order them correctly. Most of them are simple and, whilst not too complex, they break up investigations nicely. Stringing these tools together can sometimes lead to headaches but the general sleuthing deliver The Sinking City‘s stronger moments.

Unfortunately, the same can’t be said for combat. Whilst it’s not a large focus, fighting Oakmont’s infestations can feel clumsy and cumbersome. You have a range of weaponry that you expand over the course of the game. Your pistol slowly becomes a last resort with rifles and machine guns quickly usurping them in terms of usefulness. Explosives provide crowd control and traps can be used to slow foes down. Sadly, there’s a slowness to readying your weapon and firing. These valuable seconds can lead to big hits to your health bar. 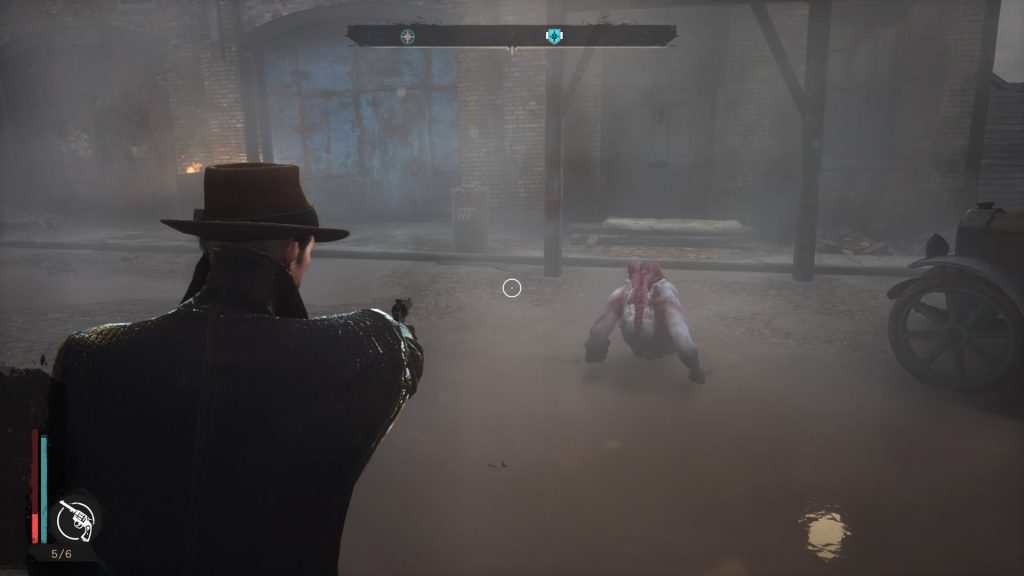 Ammo is intended to be limited and looting for supplies is crucial. Luckily, you’re never really pressured by dwindling ammunition. Stocks are plentiful due to cupboards, drawers and other loot locations respawning their supplies. Some encounters will hand death your way often and, whilst the option is there to turn the difficulty down. Any man with a shotgun is deadly and the larger monsters can close distance down quickly. It’s a nuisance but one I persevere with to give me the pleasure of more investigating.

There’s some likeable qualities to The Sinking City. Oakmont is well realised with a history that’s worth digging into. The sleuthing has a nice methodical approach and, whilst it’s not complex, it still gives you allows you to think and consider your options. The lengthy cases offer plenty of content and offers a good incentive to suffer through the rough combat.

The Sinking City
7 Overall
Pros
+ Case solving is thoughtful and methodical.
+ The open world is well-written and justified.
+ Moody and darkly atmospheric.
+ The story is interesting, even if it's firmly planted in Eldritch horror.
Cons
- Combat is clumsy and, at times, unforgiving.
- Very rough around the edges.
- Lengthy, regular load times.
- Monster design is a little uninspired.
Summary
The Sinking City shows a real lack of polish but the investigations provide a likeable adventure. I found cases to be engrossing and the politics of Oakmont, whilst well-travelled and strictly Lovecraftian, give the city a sense of place. The combat is cumbersome but those keen on the sleuthing might be encouraged to tolerate it.