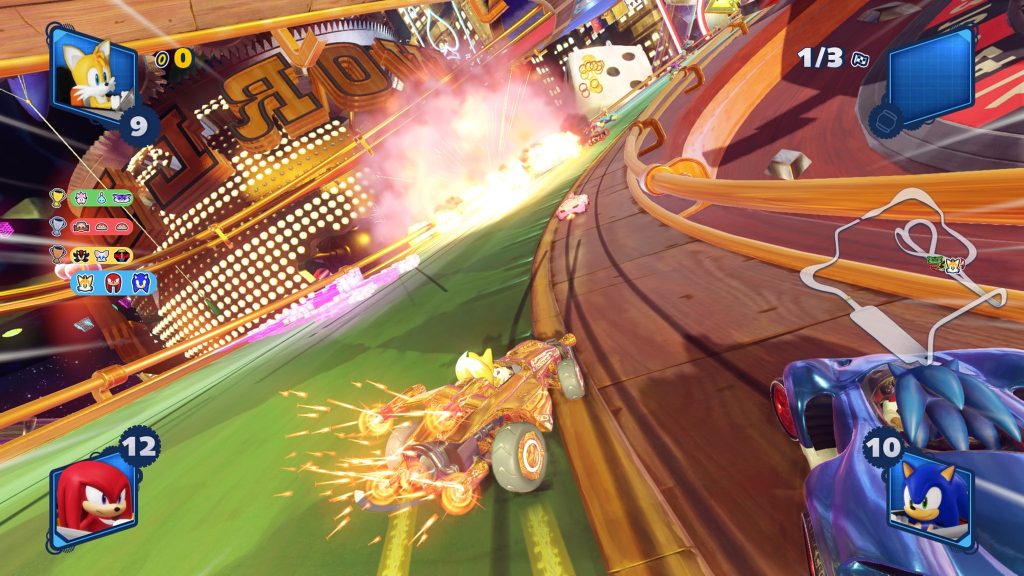 The Kart racing genre isn’t exactly known for being the most exciting in terms of freshness and innovation, but for what it’s worth, Sumo Digital’s Sonic and Sega All-Stars Racing Transformed was the closest we have been to this in the decades of iterative Mario Kart titles and the many clones they spawned. While a lot of its ideas could have been called the result of gimmickry and the need to be different for the sake of it, it provided some incredible smile widening moments for an aging Sega fan like myself. It mixed tight controls, speedy gameplay and a genuine love for the subject matter that celebrated the history of many properties that I and many others grew up with.

The only issue with all this, is that despite being a great addition to its genre, it seemed that we would not see a follow up. Six years passed before Team Sonic Racing was announced and to tell the truth, all semblance of excitement turned to palpable concern. Gone were the wide cast of Sega mascots, pared down only to the Sonic cast. Alongside the missing characters, the themed courses also disappeared and seemingly worst of all, introduced in this game was a team mechanic that dictated the need to play with two teammates, AI or otherwise that would ultimately dictate how well you would do in each race. This general worry was further expanded upon when I played preview builds at Gamescom and EGX, the action felt choppy, team racing felt alien and I couldn’t help but feel that the lack of a wider Sega roster made things less fun overall.

It seems that Sumo Digital and Sega heard the echoed feedback from these preview events. The team went back to the studio and delayed the title for a few months to tweak things and this appears to have been a winning strategy. Team Sonic Racing thankfully plays far better than it did at the preview events, with a good level of polish and much easier to grasp team mechanics that make sense. As a whole though, does it stand up to the quality of the Sega All-Stars series? 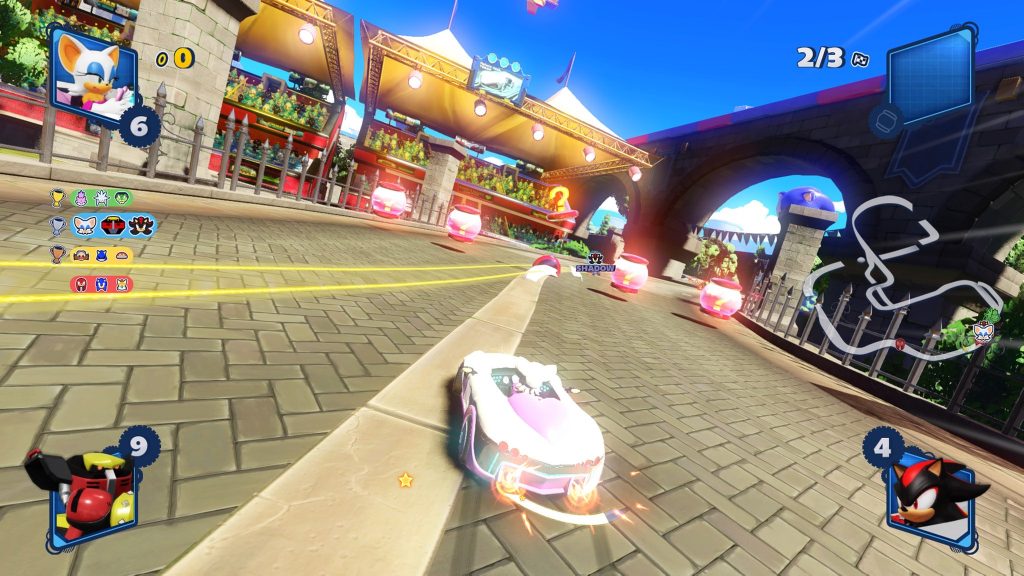 Firstly, the fundamental racing mechanics of the previous series is still prevalent. While the game lacks the planes and boats of Transformed, the kart gameplay feels as zippy and precise as ever. This is very much a Sumo Digital title, so drifting and capitalising on spare space on the track is the right route for success. Additional boosts can be gained by performing drifts and tricks while taking to the air in big jump sections and there are the typical weapon pickups which now take on the form of wisps that allow you to shoot, block or disrupt opponent racers in their bid to overtake.

Additionally, there is the team mechanic which stands as the core to this game. Each character you select comes under one of three group types, speed, technique and power. Speed is as it sounds, the karts are faster and have the benefit of getting to the front of the pack easier with correct play. Technique characters are able to traverse rough and hazardous terrain with impunity while enjoying better handling and power characters are able to plough through hazards and barriers without spinning out, while also being bulky enough to force other racers off the road with a good shunt.

Unlike a typical kart racer, where your job is to win at whatever cost, instead you are encouraged to work together with your teammates for success. For example; whichever member is currently in front will leave a yellow slipstream trail behind them that others can use to catch up, skimming by another teammate will apply a short boost to the player to help them recover from attacks and utilising class abilities helps clear the way for shortcuts and vast overtaking. This teamwork is further incentivised by a growing yellow meter behind each racer. This charges your ultimate team ability and when full, unleashes a gold glow for each of your racers as they plough through anything in front of them, be it other races, obstacles or attacks. 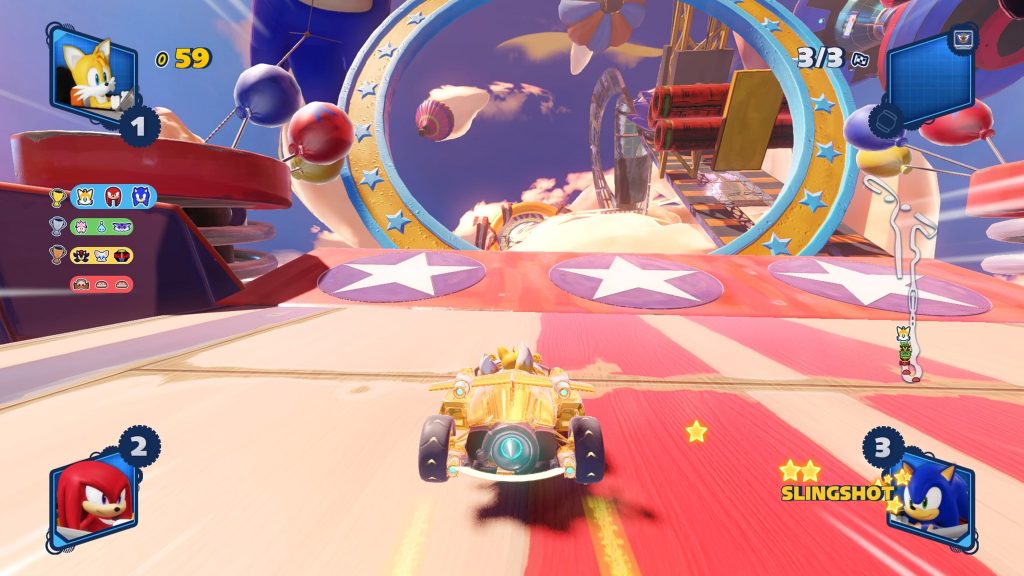 Initially, the teamwork element doesn’t feel as welcome or intuitive. However, after just a few races it starts to make sense and becomes quite fun. Whereas strategy in kart racers previously was all about preserving which pickups you had until an opportune time, Team Sonic Racing one ups this by encouraging players to stick together. You could be the best racer in the world and get first place, but if you leave your crew behind then your standing in the overall results will drag see you being dragged down by the others. It’s far better instead to drive straight and allow others to use your slipstream, share item boxes that you don’t need or hang back and offer skim boosts to the other guys than to try and claim the glory for yourself. It’s a compelling change and one that makes for a better cooperative dynamic than I have seen in other racers.

If team racing doesn’t sound like your thing, then do note that you can play with solo characters in an ‘every man for himself’ style arcade race mode. I will say however, that the amount of content for this as opposed to team racing is anaemic in comparison, so it should be seen as a tertiary setup or one that is fit for practising and nothing more.  If Team racing does sound good to you then there is a plentiful selection of activity for you. Most notably is a several chapter adventure mode which takes you through the various tracks and game-types in the form of a loose story. As a narrative it isn’t much, but it does provide some interaction and framing for the cast of characters. Thankfully, for those that don’t care about Big the Cat’s big ride, this is entirely skippable.

The main meat of the adventure mode is within the team racing, just about every chapter is gated by races and grand prix events, but there are notable exceptions. Much like Transformed, there are minigames to keep you occupied. For Team Sonic Racing you have the likes of ring races where you need to keep the timer at bay by collecting rings, Eggpawn Assaults where you have to destroy Eggman’s robots as they get in your way on the road and by far the worst mode I have seen, Daredevil. This mode is particularly notable as it was one of the few major barriers to progression for me. For this, you have to slalom through a succession of star posts on a track, on one side of the post is a point giving yellow zone and on the other is a multiplier giving red zone. To progress through these, you need to drift past the post without hitting it to gain points and with a certain amount of points you get awarded with medals. No matter which version of the daredevil mode I tried, it never felt that you were given enough points to get through and It always seemed to be the case that I scraped by with the minimum of success. It wasn’t fun in the slightest and needlessly difficult. 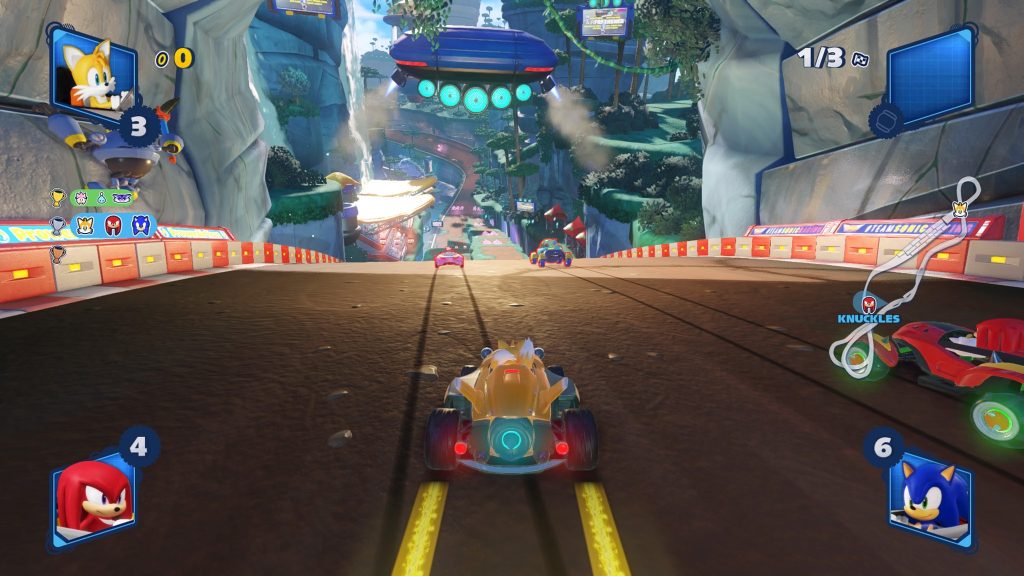 There are other aspects that let down the game. Online there are some separate modes which usually just boil down to a gimmick or two per race. Lightning race for example causes a bolt of lightning to hit racers periodically through the competition, this can be fended off with invincibility pickups. Another sees you with just rocket pickups to take down enemies and by far the worst one, Vampiric race sees your speed dictated by the number of rings you have. In this mode you have only the void wisp pickup which sucks rings up from opposing players and the chaos on screen at times just makes the whole thing joyless. Otherwise, the game plays well online for standard racing or team racing. Unfortunately, I only had limited access to this in the pre-release, but thanks to the PSC crew I can attest that the netcode is competent, bar one random disconnect which was relatively unexplained.

The other issue I have is with a completely subjective matter. As Sega have decided to remove the All-Star element from the series, the game is entirely comprised of Sonic characters and their friends which will likely be irksome to some as let’s face it, beyond Sonic, Tails Knuckles and a couple of others, they don’t really inspire the same kind of gravitas as the likes of Gillius Thunderhead and Joe Musashi. These characters instead seem like they are included just to fit the speed, power and technique archetypes, with some being paired up with characters that they barely interact with in the ‘proper’ Sonic games. You can’t tell me that Silver, Blaze and Vector are a good team as an example. Unfortunately, Sumo Digital didn’t go the extra mile and include some extra characters like team Chaotix or the sinister six guys as teams themselves. It can often feel restricting to have to pick which character you want to use because of their stats, rather than being your favourite also. This is an issue that can be mitigated slightly with mod pods which are basically loot boxes for car parts (with no microtransactions) but these only help slightly and do not turn a character from one role to another, these just seek to assist with modes like Daredevil with some incremental upgrades earned with each pod. I found these to be surprisingly generous, they always seemed to favour characters I used and I never had a short supply of legendary parts either, so this was entirely inoffensive as random loot boxes go.

That’s not to say all is lost in terms of charm however. The tracks, while not necessarily being as thematically appropriate to the Sonic franchise are well laid out and look great. Audio-wise also Team Sonic Racing is a delight, it’s great to see Tee-Lopes and Crush 40 return to the scene to create yet another excellent Sonic themed soundtrack. A personal favourite being the track for Boo’s House, which mixes the aesthetic of the pyramid levels from Sonic Adventure 2 with a souped up remix of the Sandopolis theme from Sonic and Knuckles, which to me was an utter delight, but granted, this may not be the case for others. 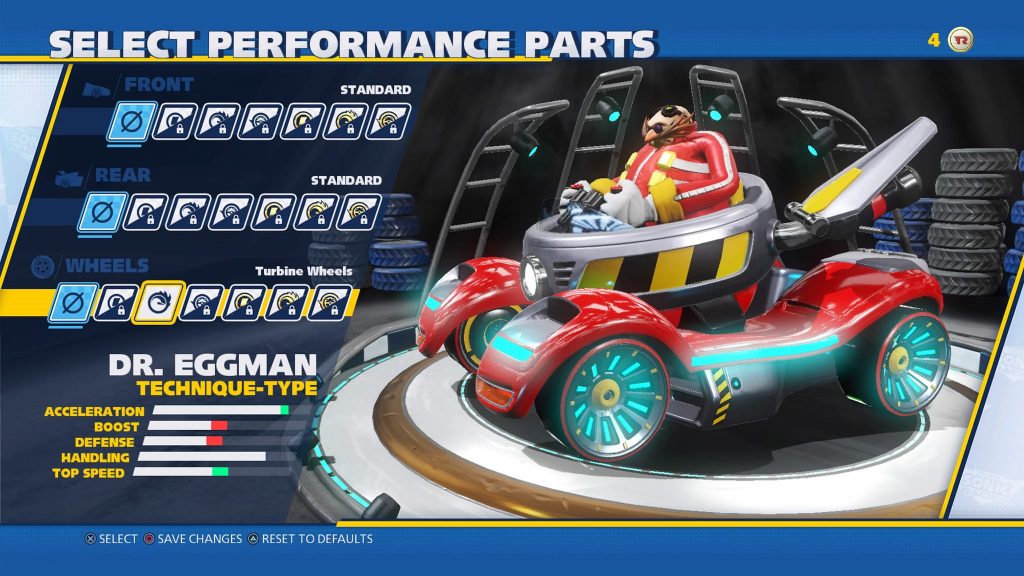 So, to answer the previous question, Team Sonic Racing doesn’t quite live up to the potential laid out by previous All-Stars titles. However, it does enjoy a few tricks of its own. The team-based mechanics are far from a lost cause and provide a fair amount of fun during online gameplay. The same tight gameplay is prevalent from previous entries and the presentation is fantastic in both audio and visual departments. There are just some issues holding it back, such as poor rubber banding and some modes that break up the merriment. Otherwise, Team Sonic Racing is a solid arcade racer with enough merit to standalone and worthy of a pickup if you are a fan of the blue blur and friends.

Team Sonic Racing
7 Overall
Pros
+ Tight racing gameplay, typical Sumo Digital quality
+ Mixes up the single player formula with the adventure mode
+ The team-based gameplay works and changes things up for multiplayer
Cons
- Missing a lot of the fan service and charm from the previous Sega-centric titles
- Some questionable and fun-lacking game modes
- Character selection is limited by the team roles
Summary
Team Sonic Racing is a solid kart racer that suffers from some unfortunate drawbacks. The team-based racing works well and mixes up the usual kart formula. However, the game is marred by game modes that lack fun, missing polish and an inescapable feeling that this is a downgrade of what has come before.