We’re not sure where Eastasiasoft are finding all these games but they’ve managed to continue their recent run of quirky shoot ’em ups.  Task Force Kampas is a vertically-scrolling shoot ’em up which has plenty in common with those recent Eastasiasoft releases (Null Drifter, Red Death and Rainbows, Toilets and Unicorns), so much so that you’d be sure they all had the same developers but that’s not the case.  Instead, this game is by Spanish devs Casiopea, a two person team with one doing the coding and the other doing the art.

In terms of game mechanics, there’s not much to explain.  You move with the left stick, or the d-pad, and you shoot with

.  Enemies drop in from the top of the screen and will either try to crash into you or shoot you.  The only twist on the classic shoot ’em up gameplay is that your weapons become more powerful as you destroy enemies but if you take damage your weapons will level down.  However, if you don’t shoot for a while, you will at least regain some health.  Generally you can take 2-3 shots before you die and that’ll mean a game over so being able to extend your run this way is a nice touch. 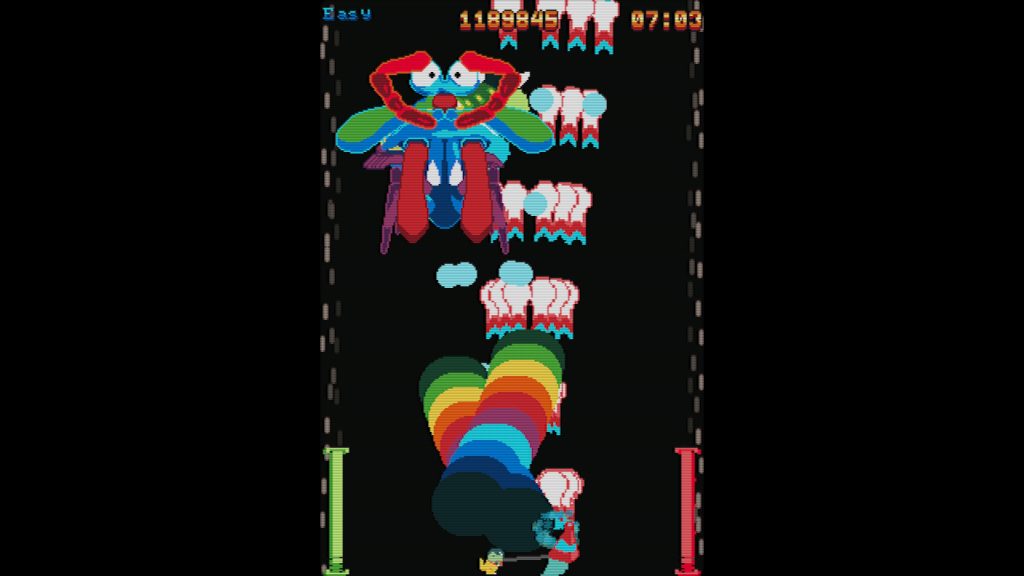 Along the way you’ll pick up icons that will offer up either level up your weapon (there’s an S icon and a D one and to be honest they both seem to do basically the same thing) or give you back some health (which is odd because the times that these show up is the best chance to lay off the fire button and regain health anyway).  There seems to be a limit on how powerful you can become and it’s not particularly generous.

You also get a choice of starting ships, with more to unlock.  For us these weren’t particularly well balanced.  There are two standouts that both favour better firepower but then the other three aren’t very useful at all.  One favours health but that only equates to being able to take one extra hit while the others have gimmicky weapons that can’t really keep up with the onslaught of enemies the game throws at you. 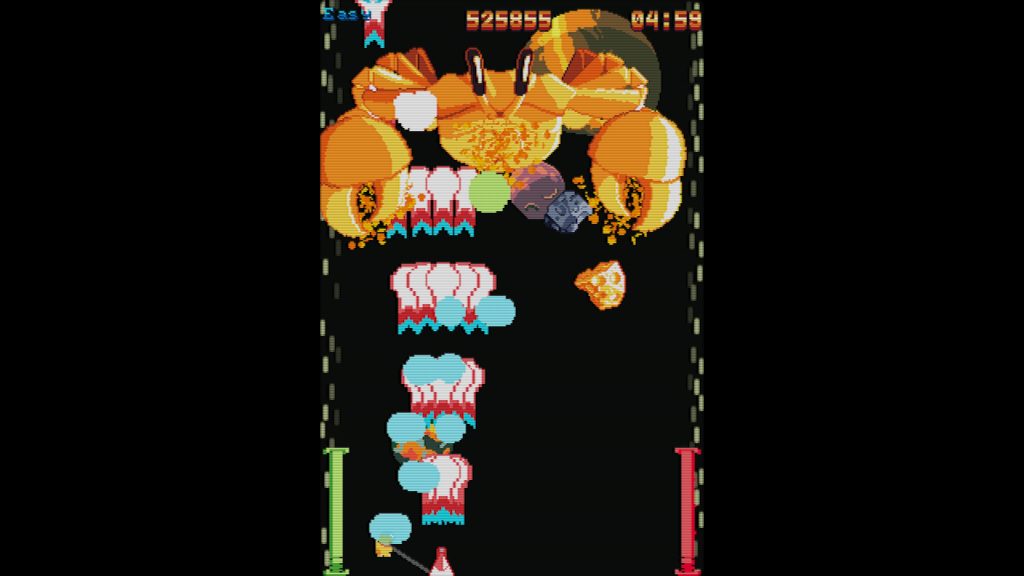 So, what does it have in common with those other Eastasiasoft games?  Well, quite a bit.  Firstly, the game gives up all of its trophies without much of a fight.  As with those other games, counters for various trophies count across separate games.  So if there’s a trophy for killing three bosses, that can just be you killing the first boss three times.  Then you’ve got the quirky retro visual style married to a decent soundtrack.

Mainly though, the big similarity is the game’s length.  Each level takes a couple of minutes and then you’ll face a boss battle.  Get through three levels (and bosses) and that’s it, game completed.  Beating the game on a certain difficulty will unlock the next but there’s not much incentive to do this as you’ll have earned the platinum long before you get past Normal difficulty.

That said, the difficulty curve is also fairly similar in all these games too.  You start off, destroy a bunch of enemies and generally feel good about yourself.  Then a boss comes along and seems borderline impossible.  You then get to that guy a few times and before too long beating them is a formality and it’s the next boss that’s causing you major headaches.  And then eventually you’ll beat the game.  I actually quite like the way these games manage to do that as you do genuinely feel like you’ve improved but you’ll have all these games beaten in one play session which casts major doubts over any value for money. 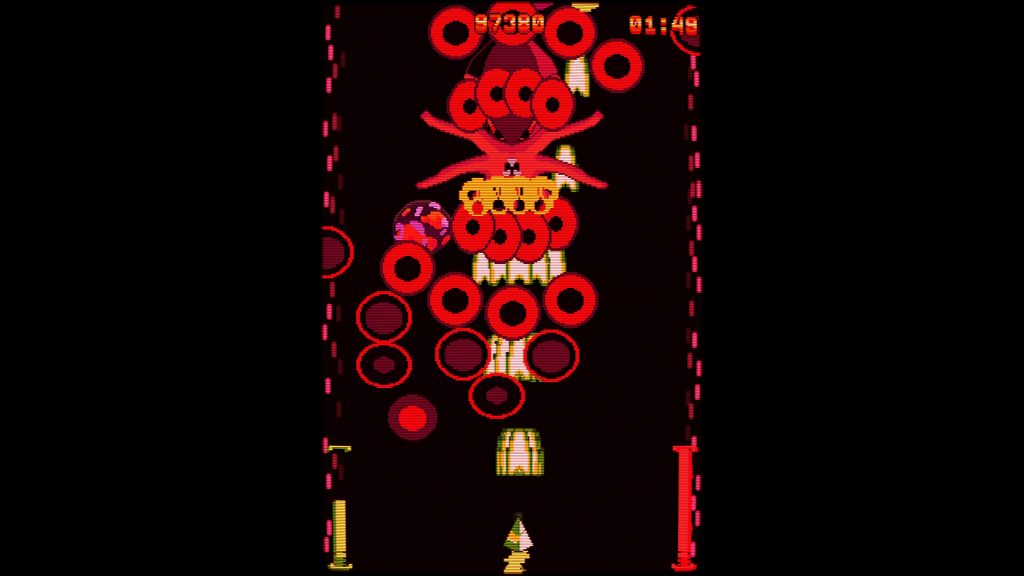 There are other problems here too.  The random nature of the levels means that none of it feels well-crafted.  I do prefer reaction shooters to those where you have to memorise things (like Ikaruga and R-Type) and so I had plenty of fun during this game’s short life but even so, this just feels like enemies are being thrown at you.  The boss battles are set though and these are a bit more satisfying to get through.

Also, much like Red Death, the lack of any background makes the screen judder effects quite disorienting.  A basic star field or something like that would make it less distracting and maybe more attractive.  When married to the chunky, retro sprites it all seems just very basic. 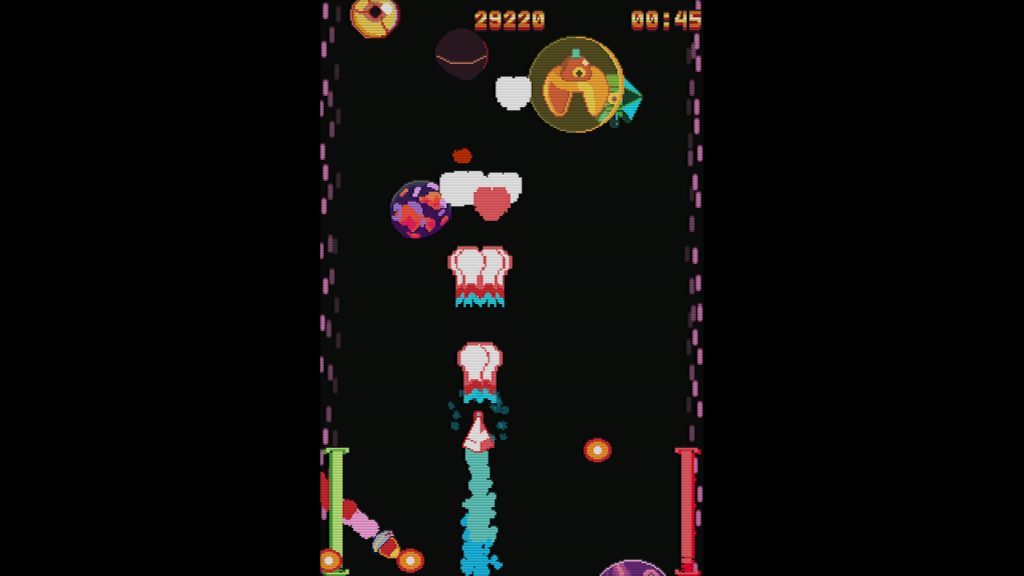 On the plus side, the best moments are the ones where you have to pick between resting your guns to acquire health or clearing out more enemies.  This adds a little extra dimension to the gameplay and makes a change from you just holding the fire button.  We would have liked to see more firing modes, or maybe at least some smart bombs, but that’s just another thing we feel that this game is missing.

And that’s really the whole game in a nutshell.  It’s fun for a while and quite rewarding but we’re not sure that a game this short and basic quite cuts it one a current-gen console in 2020.  We love our shoot ’em ups here at PSC and are all confirmed retro fans but this misses the mark unfortunately.

Summary
There's a fun shoot 'em up here but it's very short and incredibly basic.