Console strategy games are still something I tread carefully around. I’m never really sure how developers will approach it, how much multitasking will be required and, unfortunately for me, I can rarely stay coordinated. Thankfully, Romino Games are trying to keep things compact and easy to follow with Sword and Soldiers 2: Shawarmageddon. A re-release of an already well-received PC game, this looks to expand the existing campaign with new levels, bosses and online multiplayer. 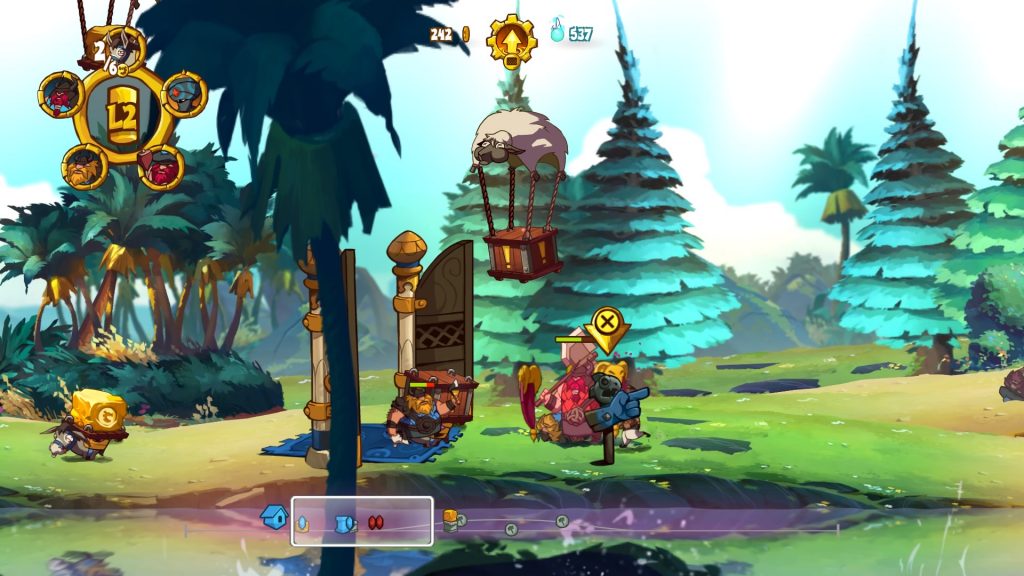 Having never played the original, Sword and Soldiers 2: Shawarmageddon is, in basic terms, a game of tower defence. An opposing force sits on the other side of the map and it’s up to you to defeat them. You can build defences, send units forward to attack and destroy the enemy’s base. All the while, you’re gathering resources to spend on units, structures and spells in what can be a compelling tug of war.

The campaign is an interesting tale that focuses on the trials and tribulations of a Viking tribe. They’re led by Redbeard and he dishes you the snippets of story between each mission. It feels a little disjointed with the Vikings moving from place to place in a nomadic style. They’re originally looking for a lamp but that quest opens into something of a wild goose chase. Over the course of fifteen missions, you’ll be tasked with many battles that each introduce you to new and exciting units. Despite being placed in the Vikings’ shoes, you do get access to each faction’s arsenal. It’s great not to restrict you to just their units and it makes the campaign a valuable training tool. 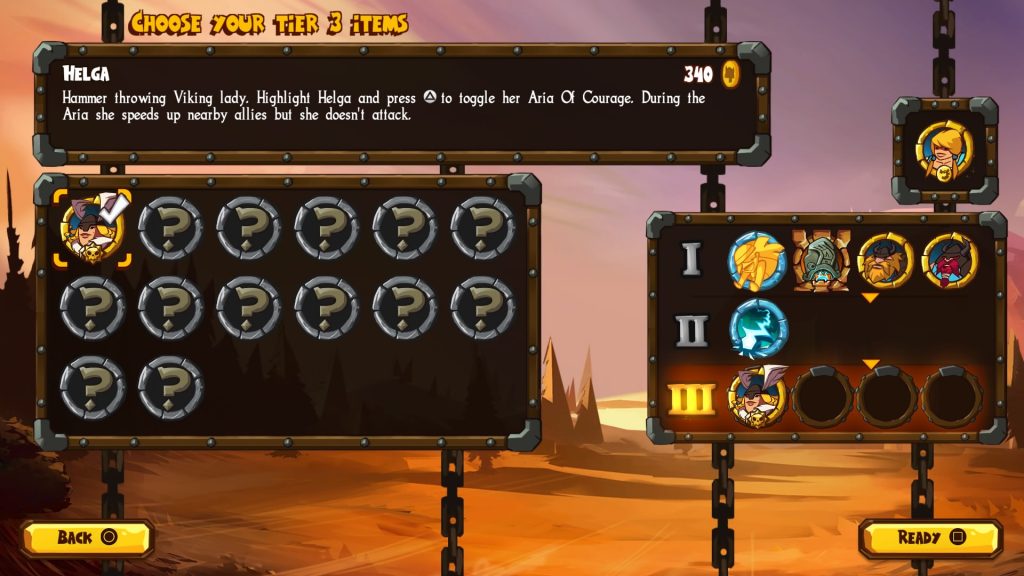 There’s an abundance of units that each cater to specific needs. Axethrowers offer some range, chefs can heal but are vulnerable themselves and Beserkers offer brutality, despite slow movement. Similar archetypes exist for the other tribes but there’s a variety to them which is nice to see. Persians off a bit of mysticism and magic whilst Demons act as thuggish, expendable damage dealers. You also have heroes at your disposal which can turn the tide with their huge health pools and passive benefits.

Magic offers further weaponry. These spells can bribe units to fight for you, shield friendly forces, transform them into harmless sheep and force them further up the playing field. There’s a lot to discover and, with the autonomous nature of unit movement, you have to manage resources more than actual positioning. Finding Mana and gold is a crucial aspect of the early stages. Stocks do parachute in as the match progresses but some levels also give you a mine of your own to produce gold. Things can get quite tense if these are lacking and, despite most games lasting a few minutes, you can potentially develop a stalemate if you’re not keeping an eye on the financials. 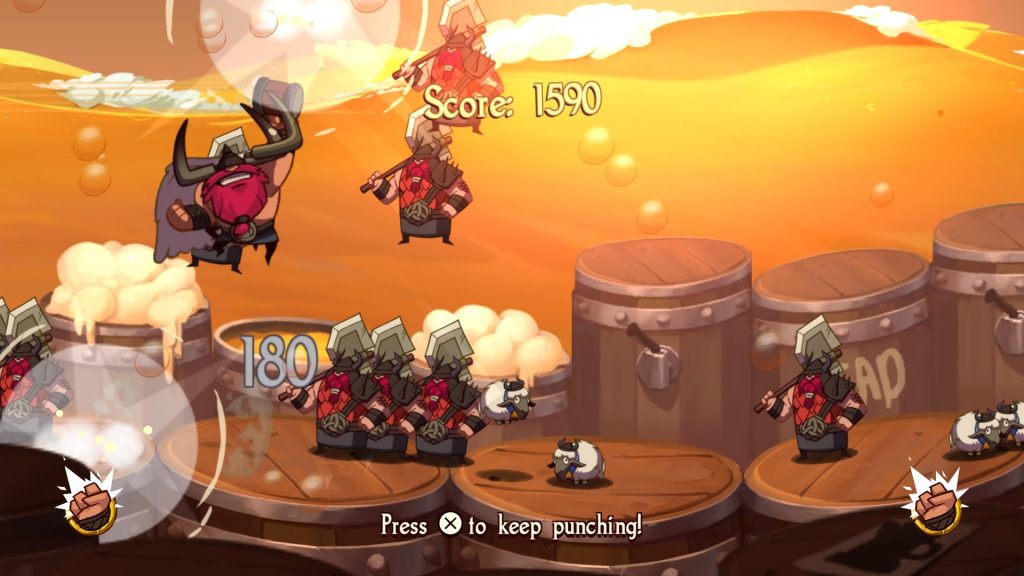 The levels offer some peculiar objectives like outrunning a sandstorm. Even so, the short nature of the levels do help subside any potential repetition. It’s nice to see them reshape standard skirmishes into something resembling a journey. You’re not waiting long for new enemies and spells to be introduced and, when you’re introduced to a handful, you’re given open battles to test out all your knowledge.

These encounters feel like boss fights and you’re given free reign to pick your units, spells and heroes before heading into battle. The adversaries tend to stick to their own faction so there’s a sense of walking into a known quantity but, given your ability to pick and choose, these fights allow you to branch out. There’s also a handful of structures to build which can help launch units across the map, set up guard towers and portals to allow for teleportation.

Mutliplayer doesn’t carry that luxury with you limited to each faction’s units. There’s plenty to choose from but it would be nice to have some kind of free-for-all options for extra strategy. Against human opposition, this can be quite fun. The playing field is short and there’s plenty of opportunities to see a match swing from one side to the other. Sword and Soldiers 2: Shawarmageddon carries a lot of depth which can really help the lifespan of a relatively modest package. The campaign can be beaten in a handful of hours and, aside from chasing medals, there’s not a huge incentive to replay them. There’s a couple of additional mini-games but these diversions feel too short-lived. 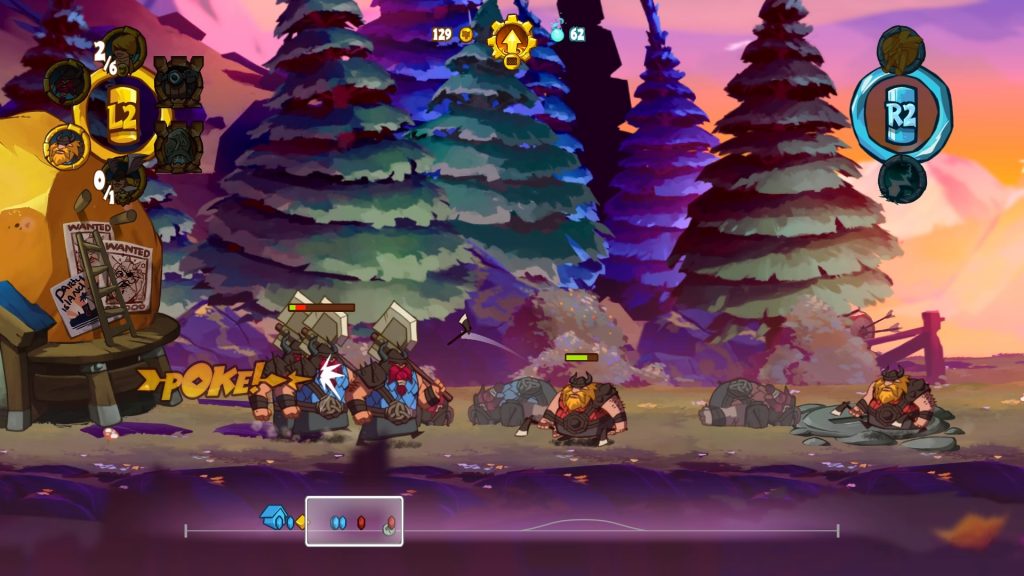 Sword and Soliders 2: Shawarmageddon‘s presentation is very simple and cartoon in nature. Brief cutscenes are there to break up the action of the main campaign. It helps keep the pace up, even if it’s not particularly extravagant or complex. Unit speech is regularly spouted out but their death cries are probably the only cue you need to be wary of. Play is easy enough to follow with maps being short and offering usually the singular horizontal plane.

I’ve enjoyed my time with Swords and Soldiers 2: Shawarmageddon but there’s a sense the game might lack a little longevity. There’s plenty of depth on offer courtesy of a huge list of units and structures to build. There’s several, diverse levels to play but, once the campaign is done, there’s not many reasons to return. Hopefully the multiplayer can foster a following.

Swords and Soldiers 2: Shawarmageddon
7 Overall
Pros
+ A well-paced campaign that trains you well in the use of units, structures and spells.
+ Plenty of varied unit types and spells.
+ Offers a lot of depth.
+ Multiplayer should hopefully deliver some longevity.
Cons
- Not a huge incentive to replay single-player content.
- Campaign has some unfortunate difficulty spikes.
- The cartoon presentation feels a little stale to me.
Summary
Sword and Soldiers 2: Shawarmageddon is an enjoyable, strategic effort. The campaign can provide the occasional spike in difficulty but the array of options at your disposal give players plenty to consider. Presentation is simple, if a little forgettable. The campaign offers a handful of hours but the multiplayer might provide some longevity for what is a decent effort.