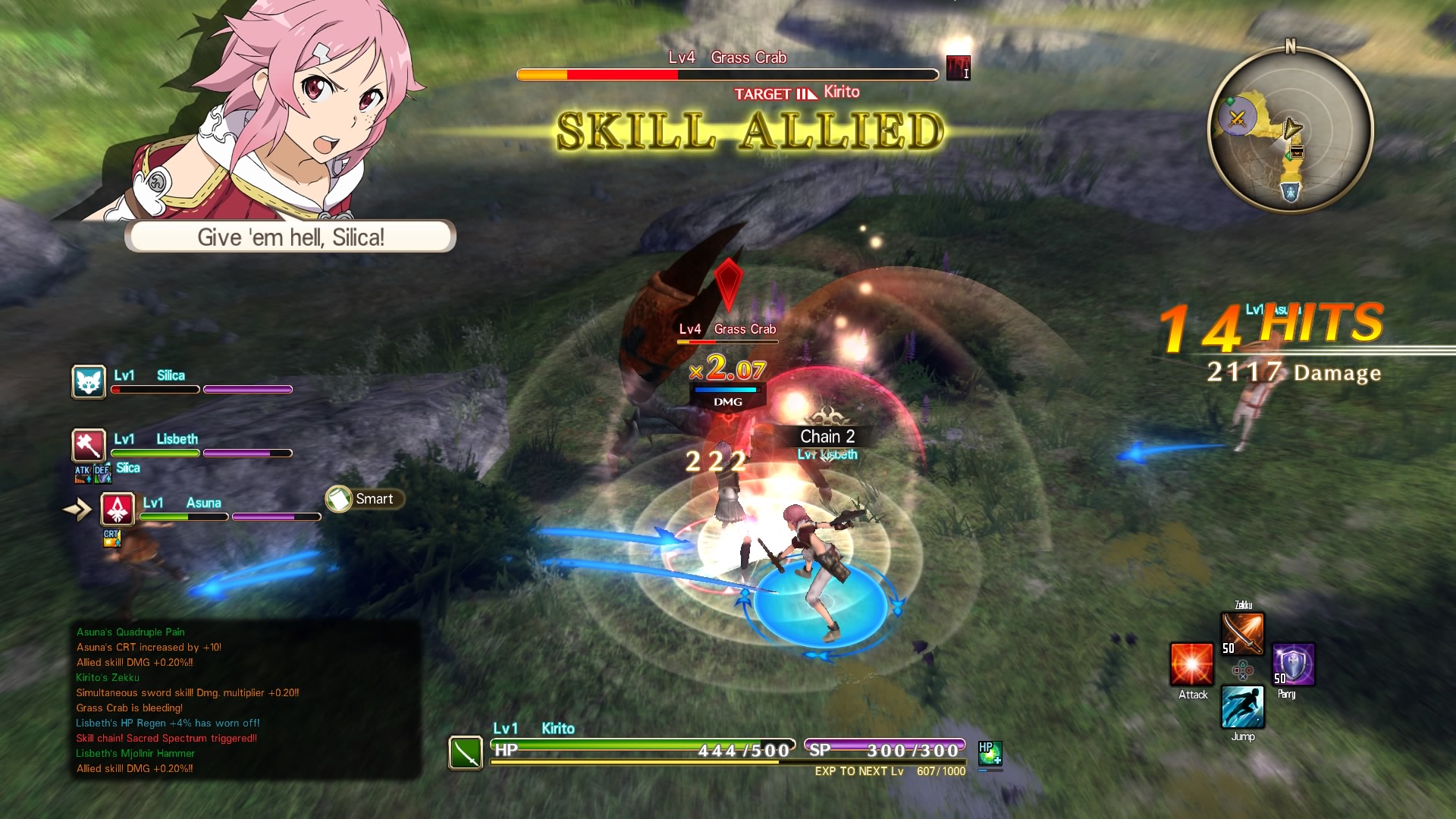 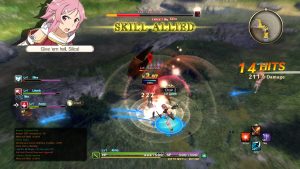 I’ve dallied with MMORPGs in the past and enjoyed my time with them, Sword Art Online: Hollow Realization is not an MMORPG, but would like you to believe it is.  The game is actually telling the story of players in a MMORPG and you control the avatar of one of these players, if you think about it too much things get very meta.

This is the fourth console entry into the world of Sword Art Online, and that world is a near future reality where players can fully immerse themselves in games by wearing a virtual reality headset.  This has given rise to a new genre the VRMMOPRG.  We follow a player called Kirito as he starts the Beta test of the new VRMMORPG game called Sword Art: Origin.

Sword Art Online: Hollow Realization has two very distinct play styles, it starts out as a third person action game but also includes lots of talking head story elements.  The game opens with a tutorial around the mechanics of combat, putting you in a field with three of your friends as you work to take down a beast. The combat is satisfying and relatively deep and the tutorial does a good job of introducing you to the basics.  It feels very arcadey in a good way and is enjoyable if a tad repetitive.

Combat and general interactions are kept to the face buttons and you can play the game as a simple button masher if you want to.  In keeping with the faux MMO trappings though, you also have an action palette in the middle of your screen which works like a shortcut menu to all of your combat skills adding depth to the proceedings if you wish.  This is a nice touch to the combat making it feel more like the MMO it is trying to ape.  As with all RPGs you gain experience by killing folks and can level up increasing your skills and stats. 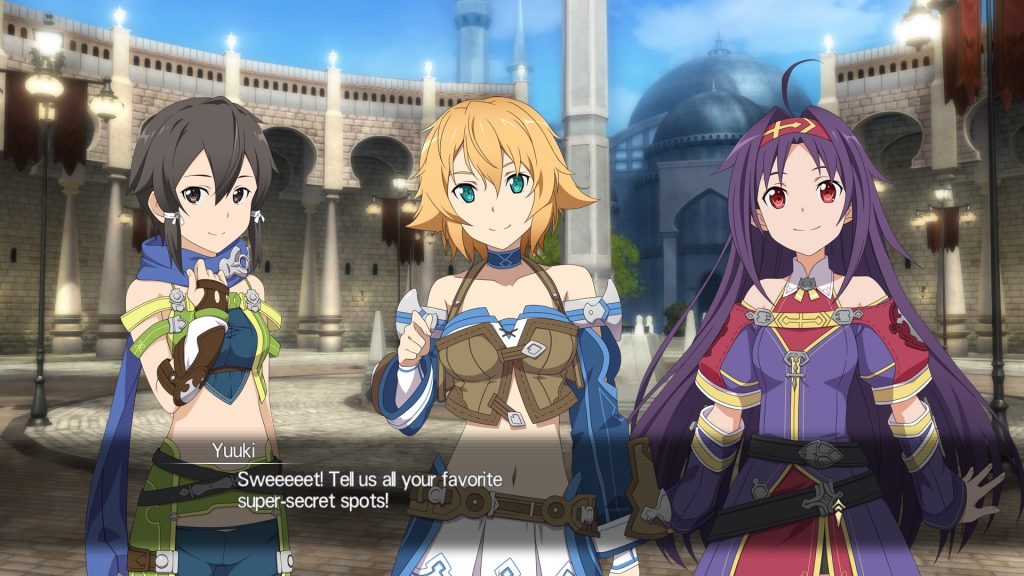 The second main part of the game is full on story.  As with a lot of anime style games there is an awful lot of exposition.  This is all carried out with reams and reams of text and lovingly drawn 2D characters.  In some regard these exposition parts of the game feel a bit like a visual novel as you can spend minutes at a time having story dumped on you.   The story being told is voiced in Japanese and mainly consists of your typical anime tropes, lots of girls and a romance sub plot.  It’s not going to do anything to attract people who aren’t already interested in anime, but within the confines of the genre it does a good job.  As this is dealing with an MMO the speech is littered with references to that genre, from the need to grind out levels to the discussion of NPCs.  In fact the story actually revolves around one such NPC called Premier as you work to discover her deeper significance.   I was engaged with this story and found the reveals to be both interesting and unexpected.

These two aspects of the game fit uneasily together and I feel Art Online: Hollow Realization only just manages to hold these together .  The lack of a true online world holds the MMOs styling’s back and as a result it is very easy to see the cracks.  On the other hand the story part of the game is also held back by the need to traipse around the world and grind the odd level before you can progress to the next plot reveal.

Visually things look alright if not exactly spectacular.  The third person action sections have great draw distance but lack the sort of detail you’d expect to see on other PS4 games. The character models are a tad simple and this is drawn into sharp focus when you consider the gorgeous high def art used for the 2D talking sections.  This difference is an odd disconnect and I found this irritating as I would have much preferred consistency between the two styles.  The screen is also very busy with icons and windows all over the shop.  This clutter mimics the design of an MMO and the design of it is actually quite effective. 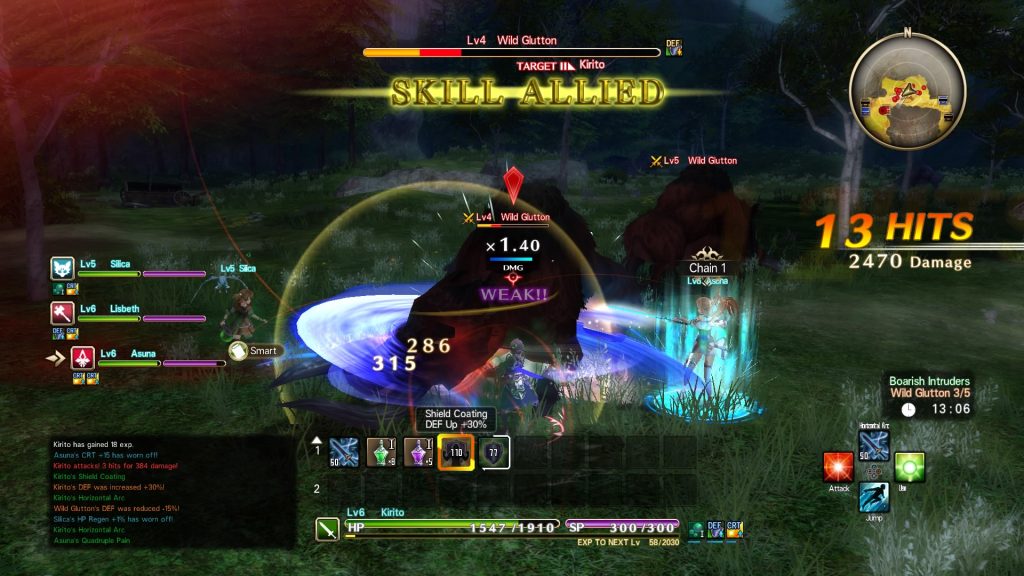 Outside of the action Sword Art Online: Hollow Realization has one main city which has limited shops in it and feels a little sparse.  Once again this feels like its copying its design from MMOs and in this regard it’s pretty successful.  However this isn’t an MMO, so instead of the world being filled with other players, it is instead filled with a load of NPCs.  You can interact with them and the game makes a big deal of having hundreds of different people to speak with, however these NPCs can never give the feel of a true MMO and as a result the city feels a little sparse. 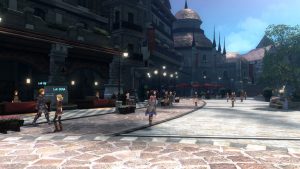 Overall what you’re getting here is an odd blend an action RPG with a dash of something like a visual novel thrown in.  If you come expecting a straight up action RPG you’ll be disappointed.  Take it for what it is though and there is a decent story interspersed with some enjoyable combat.  The MMO trappings have influenced the whole game and to its credit it genuinely feels like an MMO, which is both is biggest strength as well as weakness.

Sword Art Online: Hollow Realization
7 Overall
Pros
+ The combat and action elements are fun to play + The sprites in the story sections look great + A decent story well voiced throughout
Cons
- The MMO elements feel a little bare - There is an odd discrepancy between the graphics in the story sections and the action sections - The MMO parts get in the way of the story, and the story gets in the way of the MMO parts
Summary
Offering an odd mix between an MMO and a more standard RPG Sword Art Online is game of two sides. It tells a decent story and offers decent combat but sometimes feels like these two sides are competing with each other.