Sword and Fairy 6 is a PS4 port of a nearly four year old PC game and I believe it is the first title in the series to make it to the West. It’s effectively a JRPG but it originates from China. The game plays how you expect but with Chinese design. Sounds nice doesn’t it? 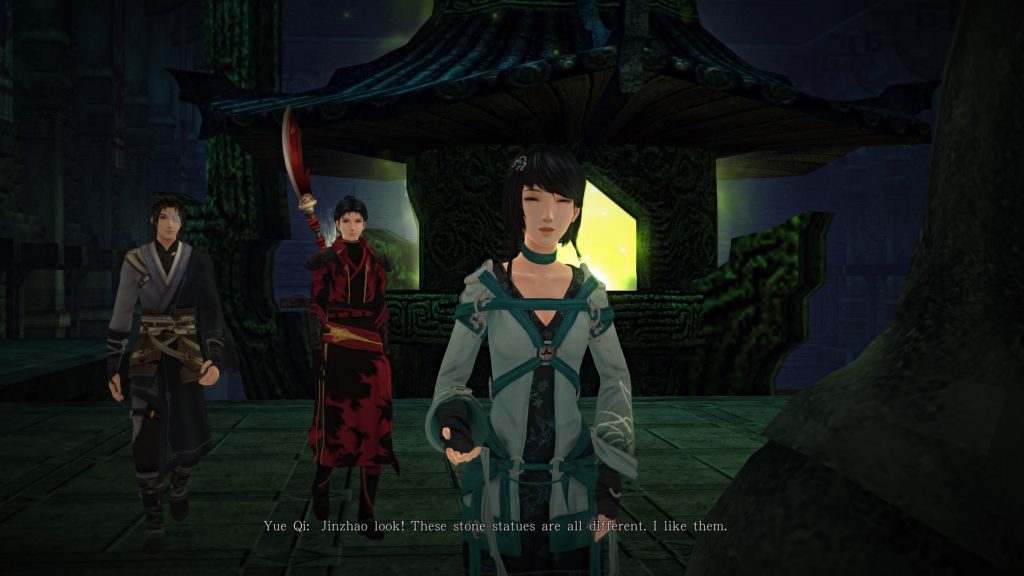 Unfortunately Sword and Fairy 6 makes a terrible first impression. Upon starting the game you get a cinematic that sets up the story. It looks perfectly nice but the translation is dire. Few sentences make any sense whatsoever so you’ll just come away confused but never mind, onto the gameplay.

Uh oh. The game starts with a brief in game cutscene that transitions into a battle and here the game’s major problem shows itself. The frame rate is awful. We’re not talking a little choppy here and there, it’s probably below 20fps at most times and when loading into battle or a new area then we’re talking single digits. It’s not even like the game is pushing the PS4 (or Pro) beyond its limits as the game looks like a high resolution PS2 title and the draw distance isn’t great. If the frame rate was steady the visuals would have looked dated but pleasant enough but the constant stuttering ruins every element of the game.

Most of the time you’re exploring towns or dungeons. Here things are pretty straight forward with new shops always offering upgraded weapons and armour, no need to compare and contrast. There are NPCs offering side-quests which are sometimes marked on the mini-map and sometimes not (probably a bug either way), otherwise your objective is marked with a yellow dot which will initiate the next cutscene. 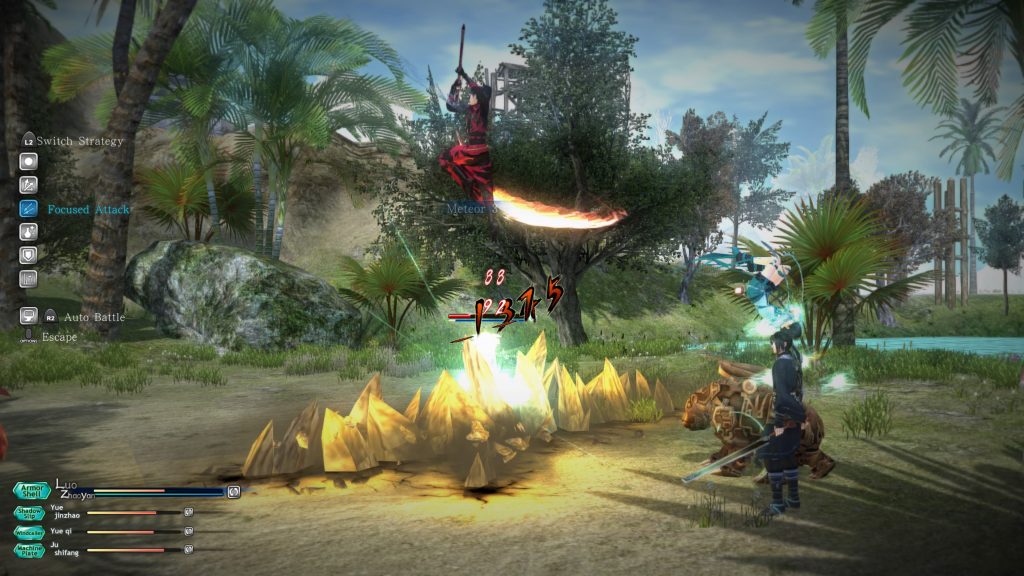 Dungeons are pretty linear with the yellow dot again telling you where your next story point is. Enemies roam the levels and you can press

on them to initiate the fight. If you’ve played Final Fantasy XIII you’ll have an idea of how the combat works. You’ll control one character whilst the AI controls anyone else in your party. You can give a simple command, such as to focus attack on one enemy or to concentrate on healing but I found if I needed healing I’d have to do it myself, the AI wasn’t too hot on it. A bar fills and you can select from your move list what to do. The bar is made of five sections and each move takes a number of sections, with weaker moves only taking one but stronger moves taking three or even all five. You can mix and match whichever moves you want as long as they don’t add up to more than five and once the bar has filled up your character will perform the moves.

You have two character classes to switch between which offer different moves but things aren’t as complicated as FF13, where you had to change to a class with higher defence when an enemy was performing a strong attack and things like that. Which is a good thing as the frame rate doesn’t get any better in the battles and your inputs will often fail to register because of this, meaning keeping things simple is the best course of action. If you do fall in combat, which you may well do on the difficulty spikes that are the bosses, then you’re given the chance to restart the fight, or even purchase some items before hand if you feel you need to.

A large portion of your time will be spent in cutscenes however. As they use the in game engine (although there are some decent 2D animated sequences) the frame rate doesn’t improve here but you’ll be too busy looking at the subtitles anyway. The whole game is voiced but not in English so you’re reliant on the subtitles throughout. Luckily the translation in game isn’t as bad as during the opening movie, although it is far from faultless. Beyond the odd typo and weird sentence I’ve even seen the odd bit of game code and some flash on screen for the briefest of time making them impossible to read. Due to this, and the fact that most scenes go on for a long time, it can be difficult to follow every scene so the minor details get lost. The overarching story isn’t too bad to follow however and it and the characters you meet and recruit are actually quite interesting with each having a decent arc. 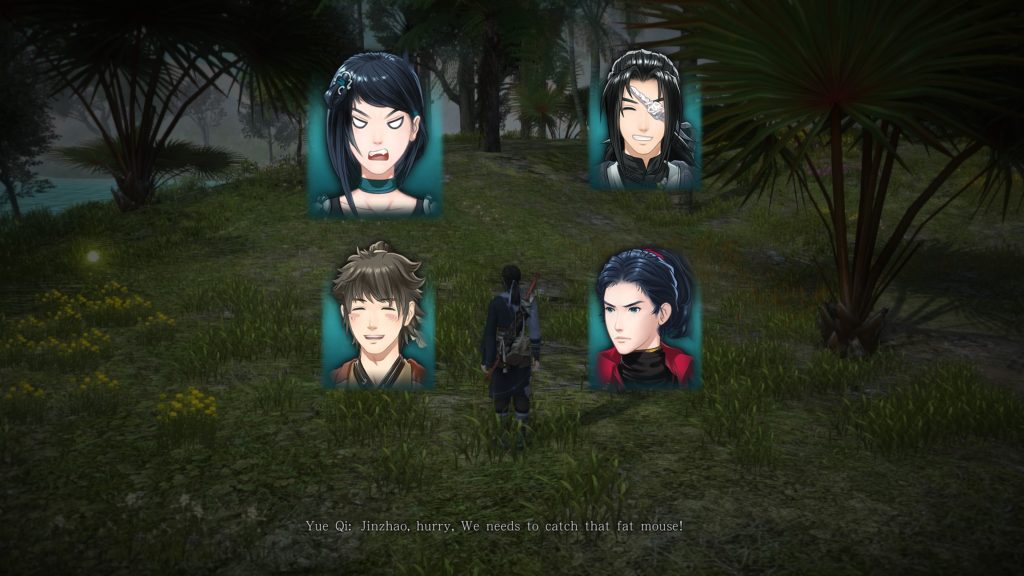 The developers also try to put some variety into the game with the odd ‘mini-game’. That is to say the gameplay changes for a bit from running and fighting. Unfortunately these are all poor. The platforming would have been bad even without the awful frame rate and there’s a section where you row a boat which was brief but horrific. Certain parts probably worked better on PC and are designed for a mouse or at least that’s what one of the tutorials told me I should have been using.

However, when Sword and Fairy 6 was working I was enjoying it just fine. It’s quite simple and apart from the odd boss fight there’s not a lot of resistance so you’ll just be jumping from cutscene to cutscene, making progress and learning more about the characters.

Then it broke on me completely to the point where I can’t recommend it. All of the buttons on my controller stopped working. I could still run around so I went to the next cutscene to see if that would fix it. After it had finished I could no longer run forward or backward, only left and right. Not that I could progress anyway as I needed the buttons to quick travel to my next destination so I had to reload my save, which was from before the game broke because there’s no autosave and as I couldn’t access the menu I couldn’t save. I managed to get past that part and then as I progressed the camera became locked in place whilst I continued to control my character so I couldn’t see where I was going, so another reload was in order (luckily I’d saved very recently at this point). Then the next cutscene I saw had a broken camera. The scene played out with the characters walking around and acting but all I got was a single shot with no camera changes as the characters walked off screen. 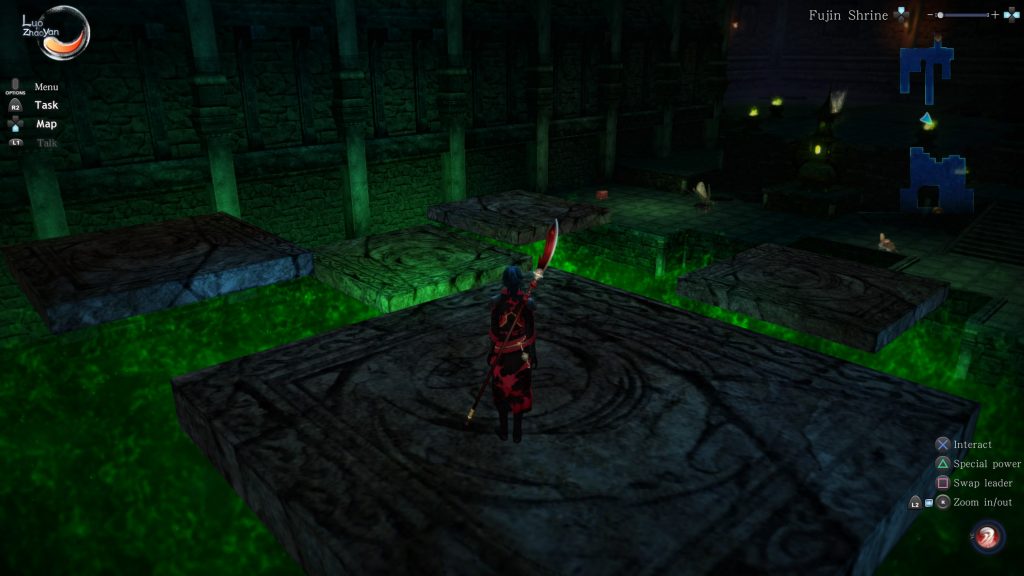 I was all ready to say that if you can get over the poor first impression and the constantly poor frame rate then you can find a decent RPG in Sword and Fairy 6, but the further I progressed the more broken it became and I’ve read reports that maybe I was lucky it held out as long as it did. It’s been out almost a month and not received a patch so I’m not holding my breath for that either. Even without its technical problems Sword and Fairy 6 would have been a simple but fun RPG from China with a good story and characters but nothing special. With the poor frame rate and numerous bugs making it feel like it could break at any moment, sometimes going so far as to actually break, I can’t in good conscience recommend it to you.

Sword and Fairy 6
4 Overall
Pros
+ The story and characters are good
+ Music is nice
+ Simple but fun RPG mechanics
Cons
- A technical mess in almost every way
- The controls aren't great for the mini-games
- PS2 graphics
- Lots of translation issues
Summary
Sword and Fairy 6 would be a fun but quite simple Chinese RPG if it wasn't for all the technical problems. The frame rate is a constant issue, making the PS2 quality visuals look even worse and impacting the controls, but there are worse game breaking bugs in here that make it impossible to recommend.