SUPERHOT was something special when it released on PC back in 2016. The core gameplay of time standing still (or at least moving incredibly slowly) unless you moved made for some great scenarios and action set pieces. Combined with the super stylistic visuals and a vague and trippy story SUPERHOT was a short but very, very sweet experience. SUPERHOT VR is probably still my favourite VR game and it followed a similar approach with the same visual style and gameplay but putting you in it, removing the ability to move around but allowing you to duck, swerve and watch bullets fly past your head in slow motion.

SUPERHOT: MIND CONTROL DELETE is a non-VR sequel to the first title. Originally intended to be an expansion it grew and grew into this standalone title which obviously shares the same DNA as the original but has far more mechanics layered on top. 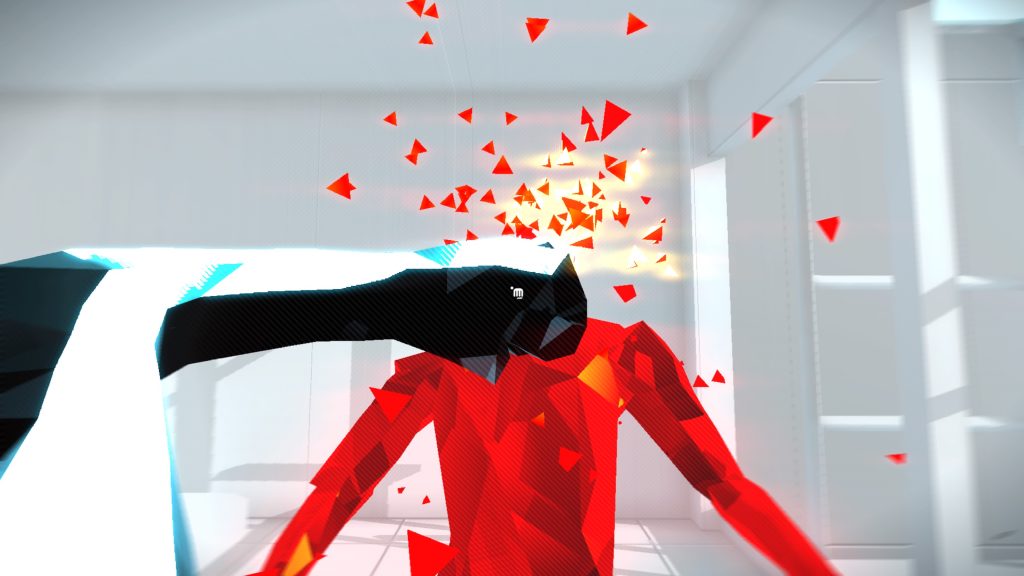 As with the original it’s played from a first person perspective and the basic goal is to defeat a certain amount of enemies within an arena. How you do this is up to you however, with your bare fists taking a few hits to take down an enemy but this might relieve them of whatever weapon they’re wielding for you to use or you could pick up a bottle and throw it to stun an enemy for a follow up attack or to buy some time. You may want to try tying down a corner or running around the map like a loon. Survival is the most important factor as depending on the level one hit might be all it takes to kill you.

Enemies run around with their fists, swords or guns. In a one-on-one fight you’re far more powerful but with a gun in hand enemies are pretty dangerous which is where the time mechanic comes in. If you stand still then time will slow to as close to stopped as can be without actually pausing, move your camera or walk and time will start to move again. Slow walking moves time forward more slowly than running so slowing down your play to be aware of your surroundings and deciding on your next move is key to not being shot instantly. 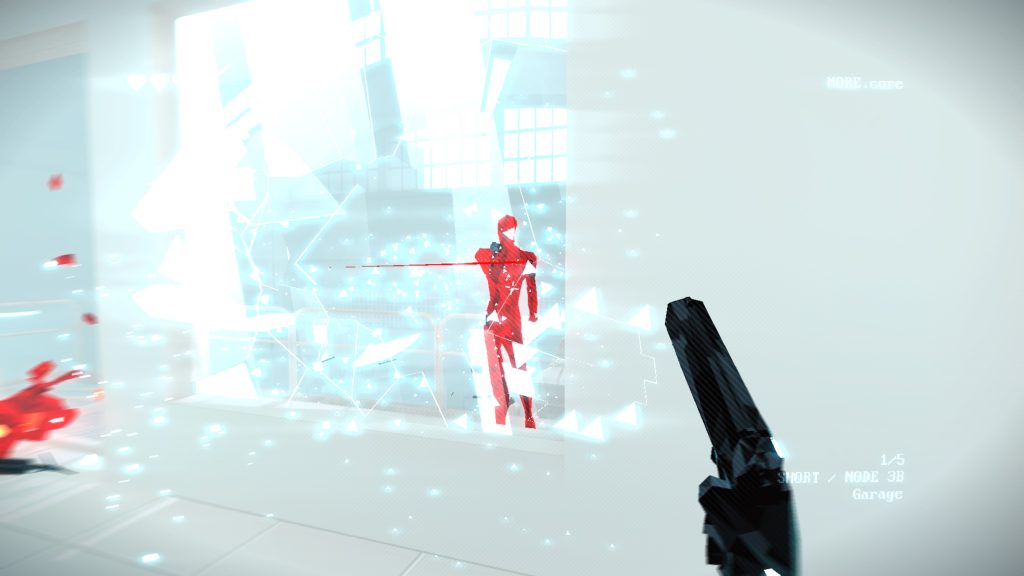 After a few levels and story beats that players of the original will be familiar with you’re put into the new portion of the game for MIND CONTROL DELETE. Here you’re given a 2D map of sorts to move your way around. Selecting a level will take you into a series of battles which will need to be completed in one go. In this mode you’re given two hit points thankfully so you can take one hit without having to start the whole thing again. On top of that Cores and Hacks are introduced.

Cores are set abilities that you can choose from at the start of a level that will grant you a bonus for the entirety of that level. This can be an extra heart to give yourself another hit or you can charge at foes from distance with a punch or recall a katana back to you like a Jedi after you’ve thrown it. You’ll earn new Cores as you play through the story and each will provide a different play style.

The Hacks enhance this idea. After a few battles in a level you’ll be given a choice from two different Hacks that will act as perks throughout the rest of the level. Depending on what gets offered up you can really focus down on your particular build. If you pick the RECALL Core for example then you’ll want to focus on katana skills and can pick things like not taking any damage from close combat, having your katana bounce between enemies when you recall it or deflecting one bullet back will deflect all active bullets back. Similarly gun based skills will let you to take another shot faster or instantly on a kill or hold more bullets whilst other skills will improve your punch power, allow you to kill enemies by jumping on them or you can simply heal if you’ve taken some damage. 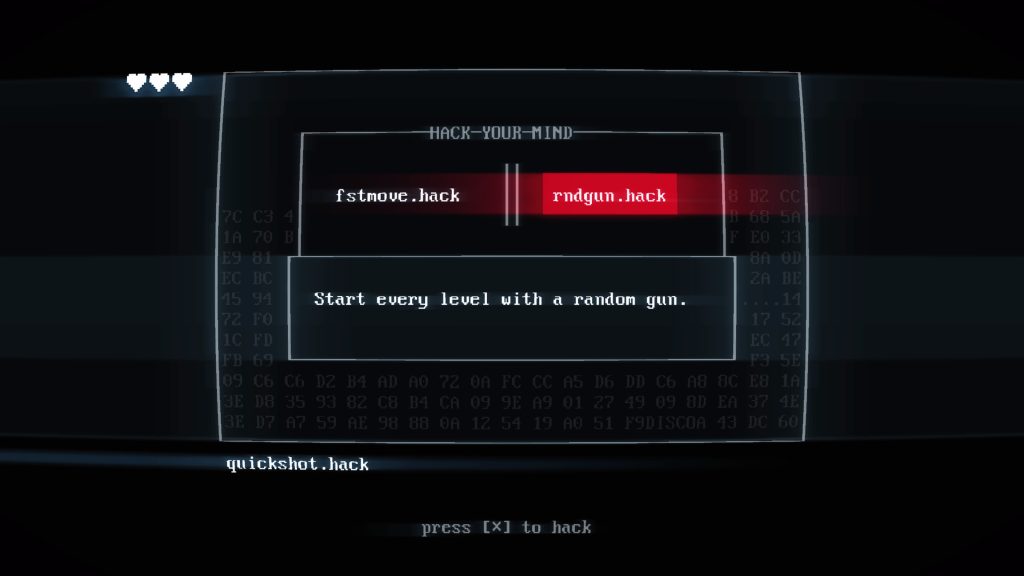 This adds a roguelike element to proceedings, albeit only for that level before you start all over again for the next. A little bit of randomness when offered new Hacks combined with picking your Core at the start and using your understanding and mastery of the mechanics in order to overcome the battles themselves. It’s a lot of fun and carries SUPERHOT: MIND CONTROL DELETE for a while as otherwise you are simply doing the same thing over and over. There are a decent number of environments but you will start seeing the same ones repeatedly as you jump from battle to battle. What might start out as five battles to complete a level will triple by the end of the game so you’ll be seeing a lot of these environments and of course things will get more difficult.

There are new enemy types to worry about and mix things up a bit. The basic red crystal guys from the original are your grunts and can be taken out fairly easily. Now there are white guys with only one body part that is vulnerable crystal, spiky guys that explode into bullets upon death, proximity mines that do the same and ‘boss’ characters that aren’t too common but can’t be killed and will chase you around the map hassling you with their personal special ability. Much like the abilities the new enemy types do freshen things up and keep repeating the same arenas from feeling too samey as the enemy mix and formation differentiates things enough.

The visuals help here too as the arenas are quite small and mostly pure white. The red enemies really pop and as they shatter as you kill them and stray bullets hit panes of glass causing them to shatter, all happening in slow motion as you observe the dangers and destruction around you, it can be awesome to look at for something so simple. The amount of shattering glass can impact the frame rate briefly though it never caused a death. The only other bug I encountered was after I’d finished the game. I went to a level and was a few battles in and the game stopped spawning enemies meaning I couldn’t reach the required amount to progress. My only option was to quit and retry. 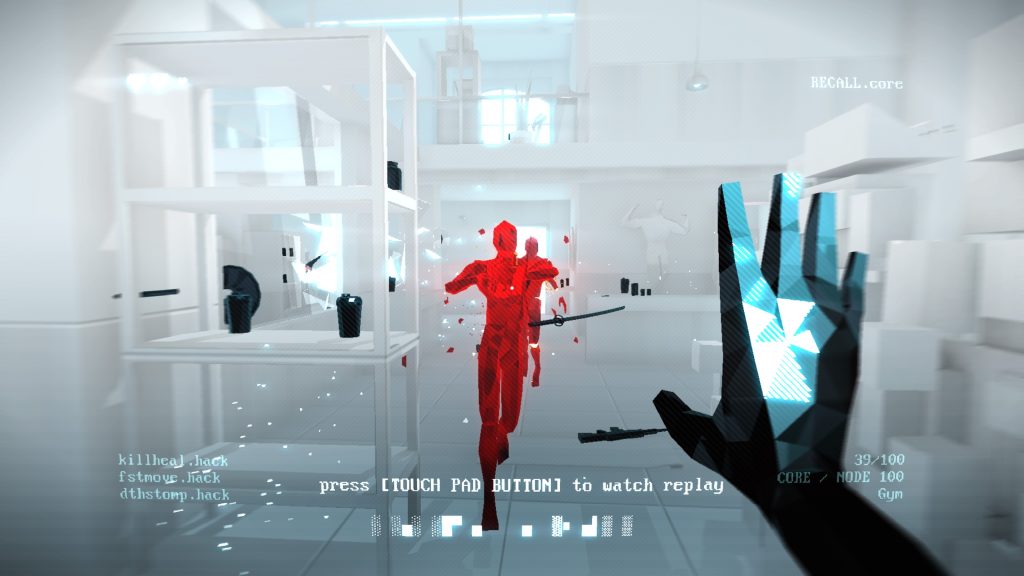 Story is threaded throughout the game as you make progress and how much you enjoyed the purposely vague storytelling of the original will apply here too. I enjoy it for what it is but I’m not really going to be digging deeper or anything like that and the ‘ending’ is an odd choice to say the least. What people might be happy about is the length of the game however as it is far longer than the original or the VR title. In fact I might say it’s a little too long, mostly because the battles towards the end can be very frustrating with having to repeat so many battles if you take one too many hits (or it bugs out).

There’s a far longer survival mode too if you’re crazy and an endless mode if you do everything and need more challenge. You’re certainly getting a lot of game for your money. Speaking of, if you own the original SUPERHOT then you get MIND CONTROL DELETE for free. Yes, free. This only counts if you purchase(d) it before the release of the new game (July 16th) so if you’re interested then I’d get on that and the game will be automatically added to your PS4 library. 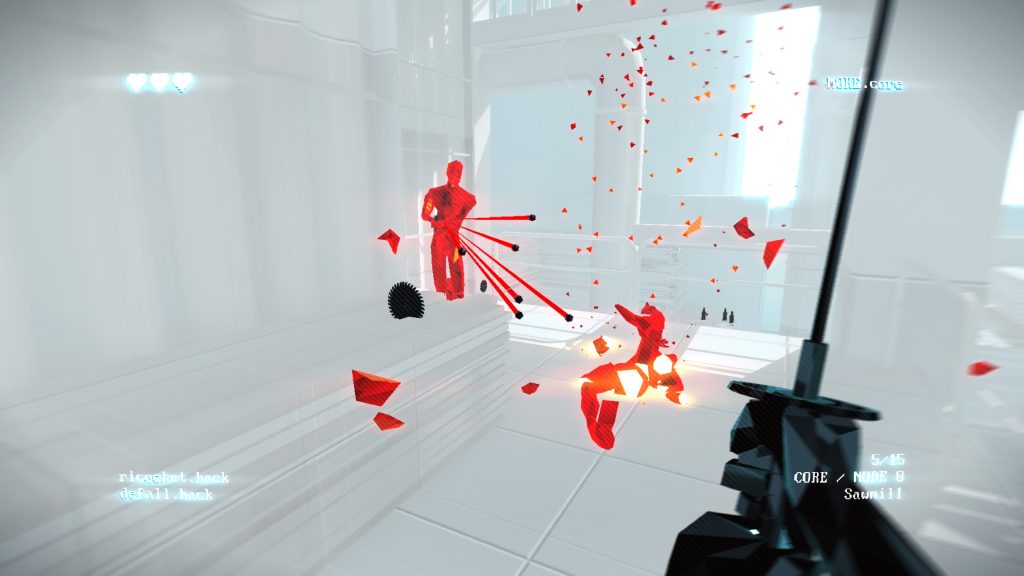 Even if it isn’t free though SUPERHOT: MIND CONTROL DELETE is a very entertaining and enjoyable game and more SUPERHOT for those that are clamouring for it. The new gameplay tweaks take the short but sweet experience of the first game and add a depth to it that I didn’t know I wanted. Let’s hope that an awesome new VR experience is somewhere around the corner too.

SUPERHOT: MIND CONTROL DELETE
8 Overall
Pros
+ New mechanics and enemies add much more depth
+ Far longer than the original
+ Same exciting gameplay
+ More story? I guess?
Cons
- Can get frustrating if you get stuck
- What's up with that ending?
- No VR
Summary
SUPERHOT: MIND CONTROL DELETE is more SUPERHOT with a semi-roguelike twist. The skills and new enemy types keep things interesting even as things can get more furstrating towards the tail end. Those who are invested in the story get more of that too, the rest of us can just shoot and slash in slow motion as the whole world shatters around us.