Another week, another Ratalaika release. This time from Brazilian boutique developer lightUP comes Super Wiloo Demake. At least we assume they’re Brazilian due to the Portuguese language choice having the Brazilian flag anyway.

Super Wiloo Demake is a charming retro styled platformer with a baffling plot we’d struggle to get our head around even if the text wasn’t evidently localised via Google Translate. Rather than, you know, getting someone who speaks English to help. We can’t comment on the other languages, but it doesn’t bode too well. Though the German for ‘Sound’ in the menus definitely isn’t ‘Sound’ either. 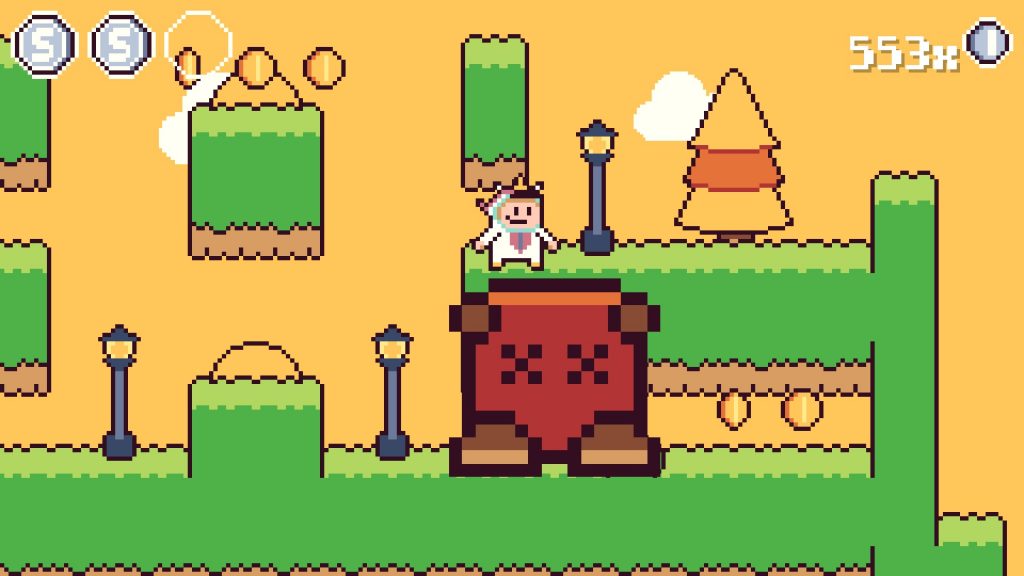 At at any rate, what we can gather is some evil space doctor has turned the animals bad and it’s your job to put him to task as the titular Wiloo. We’re not sure who he is, and what a demake is in this context, but there we are. Normally a lo-fi remake on obsolete hardware as we understand it, like Worms on the Spectrum for example. Who knows. Maybe lost in translation there too.

What follows is an initially charming platformer that is fine for the opening stages but sadly unravels beyond after that. It’s all sunshine and butterflies in world one but it goes a bit wrong in world two. 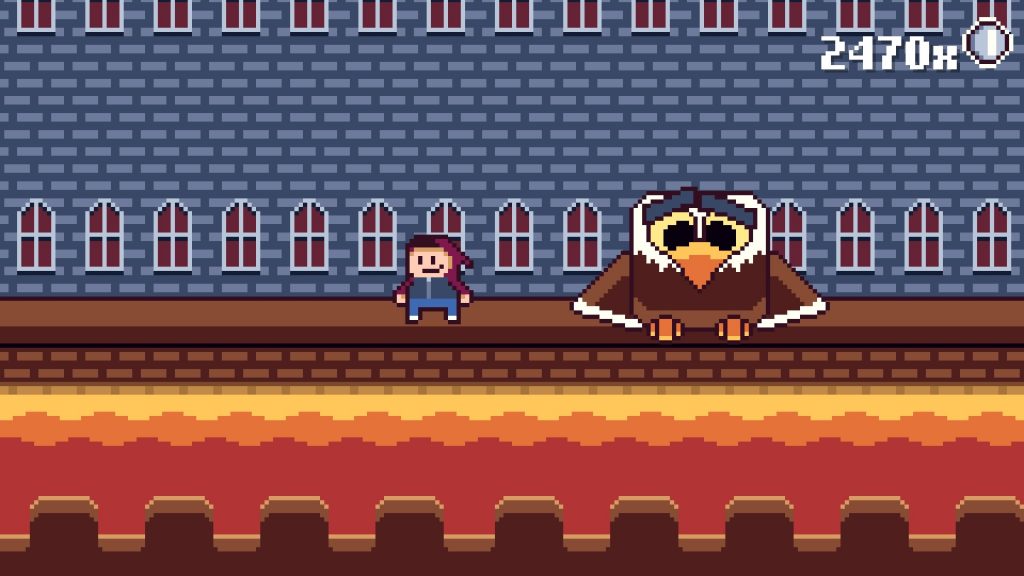 You can gain super animal friend powers by picking up icons during your adventure. The first being what we think was an armadillo, followed by a bee and a unicorn. The armadillo can roll into enemies, but you’ll probably time the roll wrong as we did and lose your power. The bee lets you fly for a limited period before having to land again, handy for hoovering up coins and bypassing entire swathes of enemies.

Finally the unicorn lets you give enemies a taste of their own medicine by shooting with its horn. It’s a convenient device for getting through some of the more densely populated areas anyway. 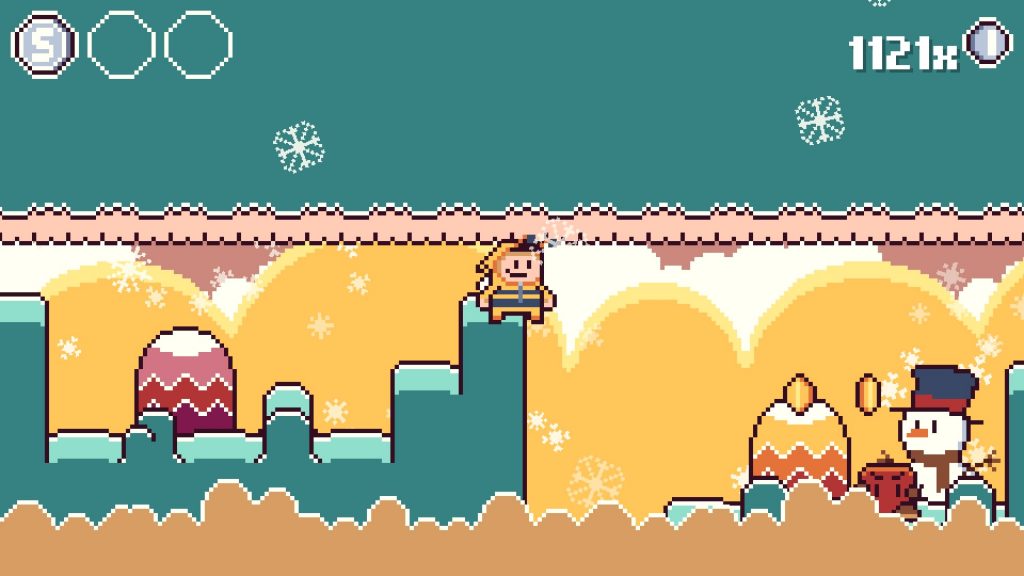 World two is the contractually obligated set of ice levels spread across eight levels you wish were over quicker. Every surface is apparently covered in ice which makes it super slippery and super frustrating to guide super Wiloo through his super adventure.

Mid-level checkpoints are often superfluous due to their placement too far into levels. At least the devs saw fit to automatically grant you the unicorn suit after multiple deaths in the same section, perhaps realising densely packed baddies in tight platform areas makes for a frustrating experience.

Coupled with some fussy platforming and enemies that one-hit if you so much as brush them, we had zero impetus to proceed once the last trophy had unlocked. Not a great experience, and we daresay unlikely to be continued by many gamers. 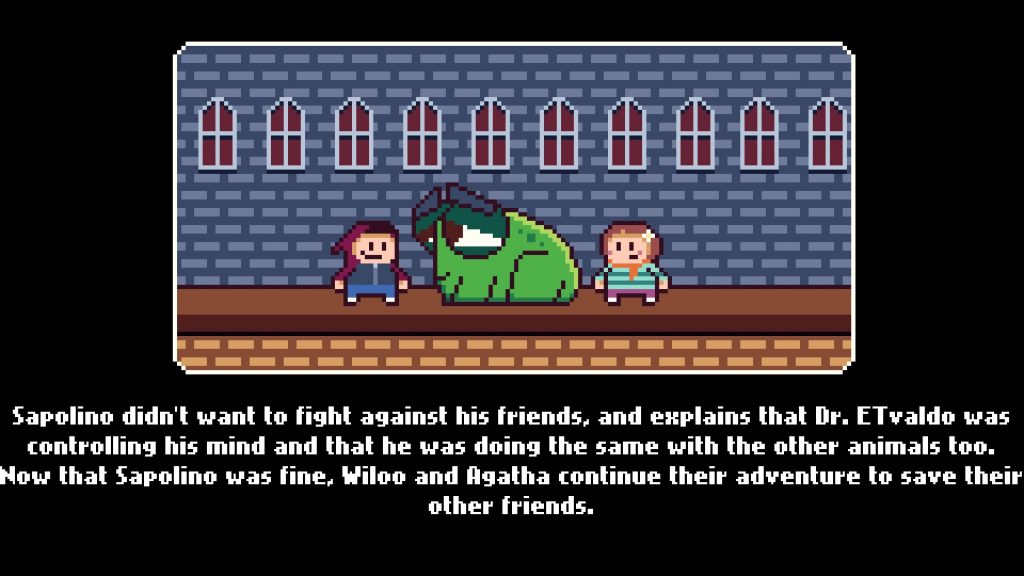 The two bosses we encountered were an angry frog and a vexed eagle. Both of which were easily defeated by jumping on their heads a few times. No real strategy required, just avoidance of their movement during their invulnerable stages.

For a game where the splash-screen art depicts animals as the chief antagonists, we can’t help but feel slightly shortchanged by the fact most of the enemies are generic squat things. You have the standard yellow blob with legs. Then the same again in red and purple. Beyond their colour there’s no distinguishing features for each, just slight changes in behaviour when you enter their aggro cone. 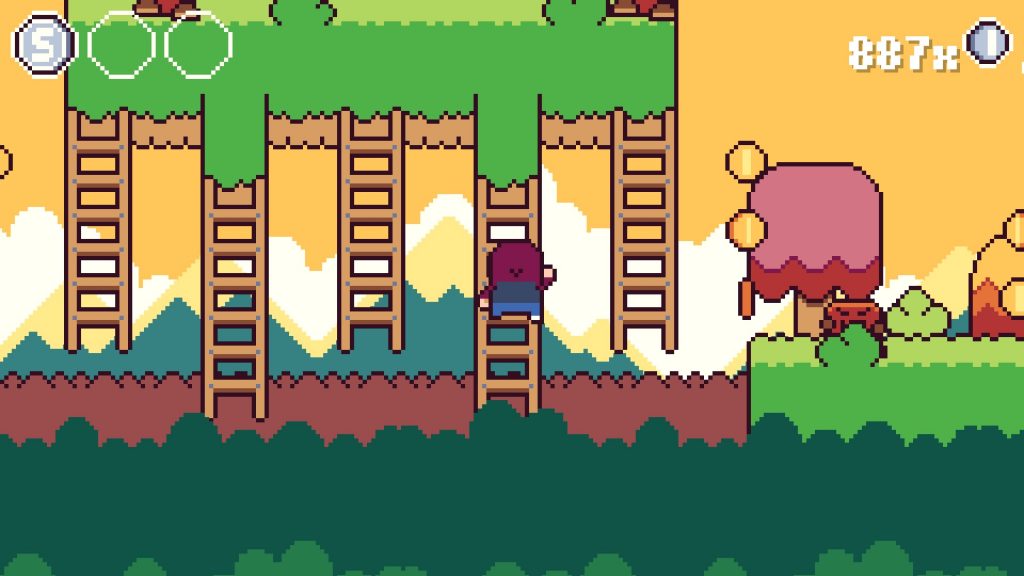 Thankfully being a Ratalaika game, you won’t have to do much beyond progressing to the second boss to get your platinum. Wiloo had long since outstayed his welcome by then unfortunately.

We played first on Vita as it meant we could get cracking during our commute home. The inevitable platinum came after two train rides on consecutive evenings, though not for want of excessive swearing and occasional bugs.

All of which made Super Wiloo Demake feel as welcome as the aftertaste from a dodgy new product being handed out for free at Waterloo station. We thought things might improve when we played on PS4 but unfortunately it wasn’t to be, our main reason for a second playthrough being to get screenshots suitable for this review. The only sweetener being the straightforward platinum at the end. 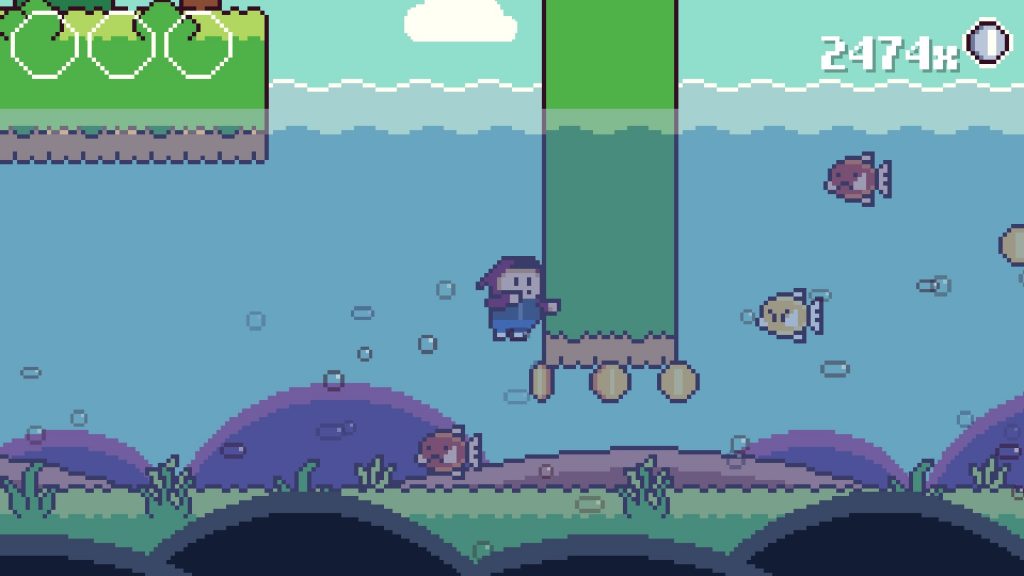 Unlike more recent Ratalaika releases, we didn’t feel all that compelled to continue playing, though we somehow found ourselves playing world three of five. Water themed in case you wondered with levels reminiscent of early Super Mario games, only with forgettable music. Somehow it feels less hateful than the ice levels did, but then so would free tickets to see Simply Red in concert. OK, maybe not that bad but it’s definitely an improvement.

We initially thought you could collect a frog suit to aid your aquatic traversal,  but it turned out to be a turtle. Aw. Though being a turtle, you’re not equipped with any sort of offensive capability so your progress through the level becomes sluggish once more when you inevitably get clipped by an enemy. 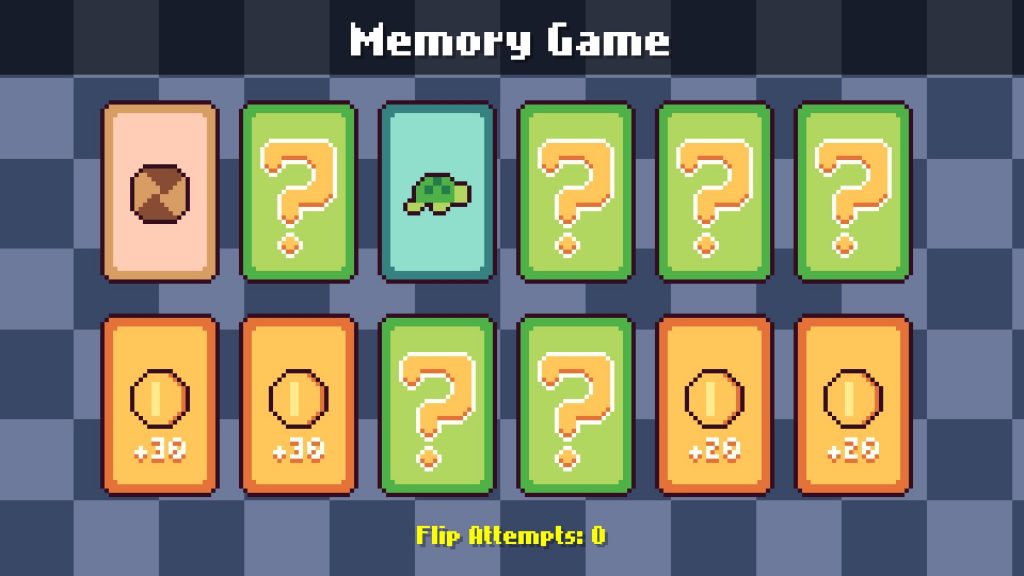 Aping Mario in another respect, the bonus stages you encounter to give you extra gold and power ups are functionally identical to one in Super Mario Bros 3, the memory game. Although unlike Mario 3, there’s literally just one mini-game. That’s all you get.

In addition to the uninspiring platform action, the developer is fond of having a nice layer of parallax scrolling in the foreground. This is all very pretty for the most part, but when this window dressing obscures an enemy and you die due to their being practically invisible, it gets a bit old. The image below being a prime example. We’re behind the central cloud at the bottom of the screen, believe it or not. 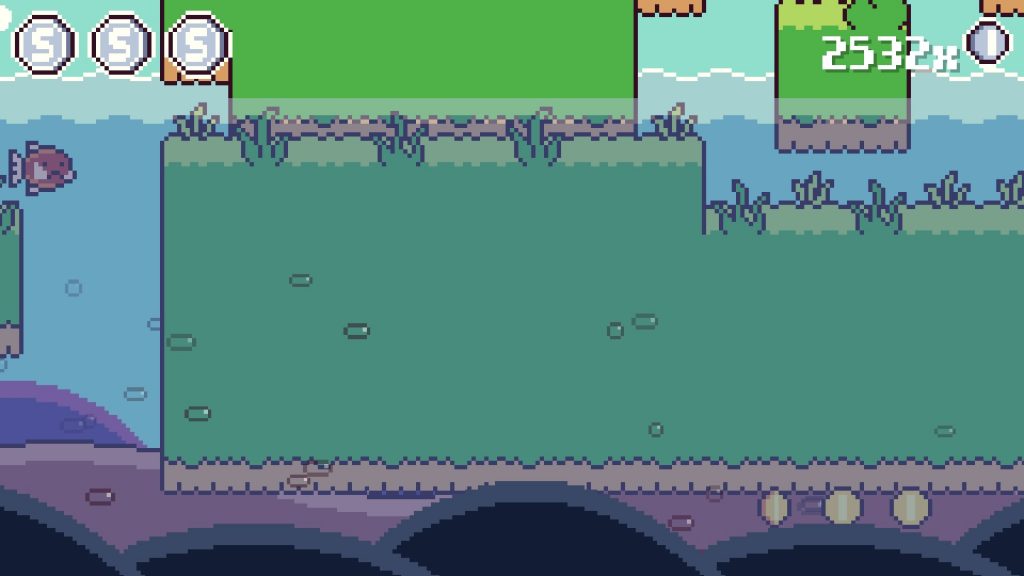 We mentioned the bosses earlier, we reached boss three before we submitted this for publication. What should be a straightforward octopus boss is made far more complicated by the fact Wiloo dies from a single hit. Once again, jump on his head a few times and hey presto, you’re done.

If there are any plusses here, the levels are generally nice and short. The problem that occurs on more circuitous levels, on world two especially, is that a level that is short as the crow flies ends up overlong, especially combined with repeated leaps of faith. On a couple of the levels you can easily end up trying a dozen times. It all adds to the outstaying its welcome feeling. 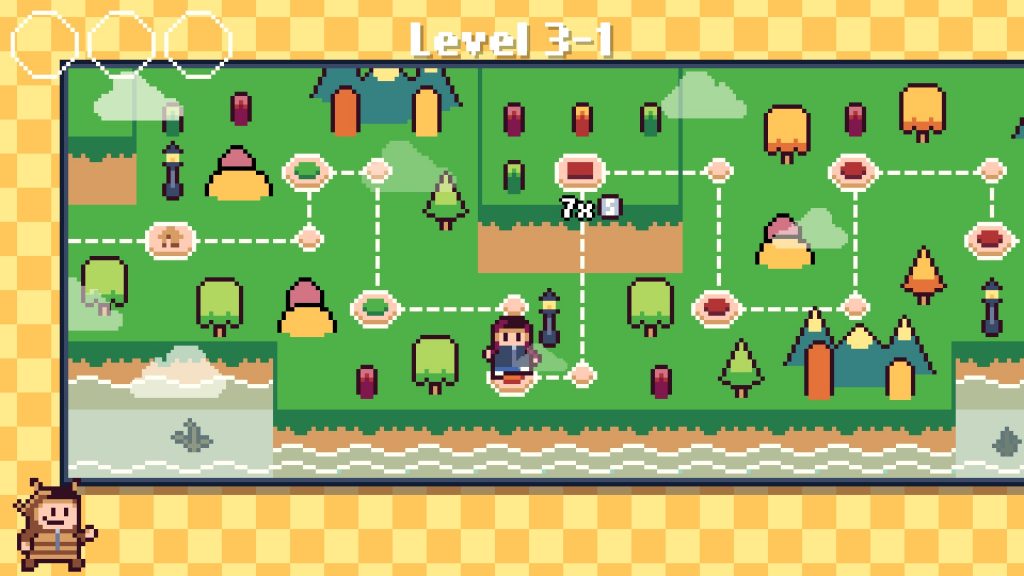 Upon playing Super Wiloo Demake on PS4, it’s abundantly clear that Vita is the lead format. Well, look at the two screenshots below. The first is on Vita, the second is on PS4. Stretched out on a massive telly it looks like a game a kid might knock up in an afternoon using Mario Maker. Only with shoddier graphics and nondescript placeholder music. 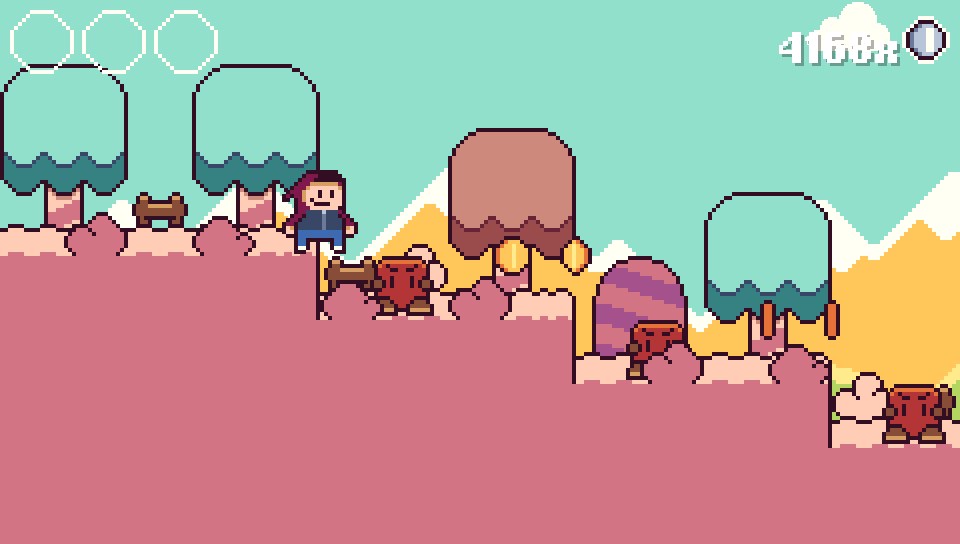 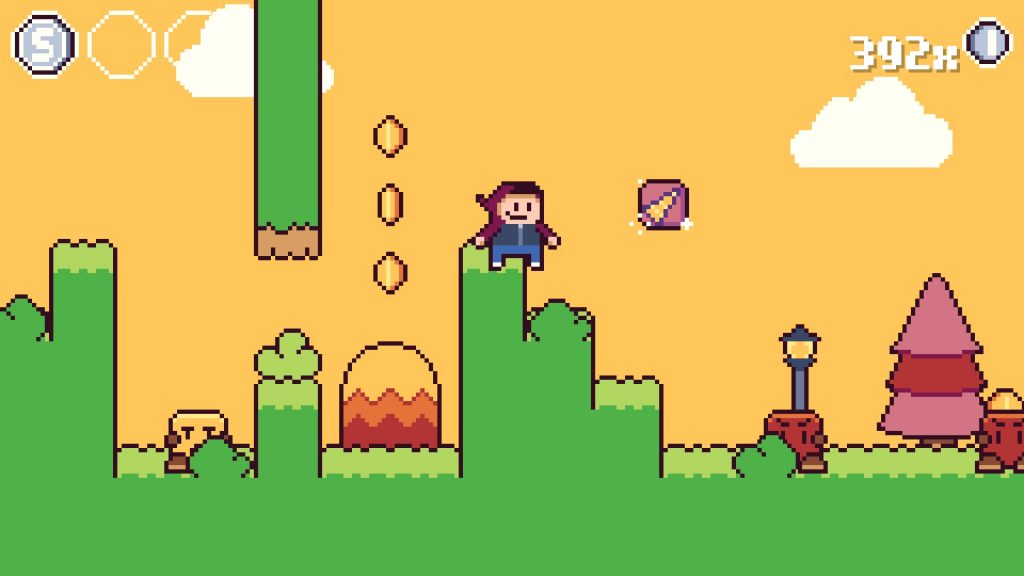 To round things off, my five year old observed the best strategy would be to kill yourself repeatedly just to get the unicorn suit and cheese the levels. When a kid can come to that sort of conclusion you know something’s rotten in the state of Denmark.

The platinum is all well and good, but you have to suffer through the shocking ice world to unlock it, twice if you do so on both PS4 and Vita. Not good. In conclusion, Super Wiloo Demake is an oddly charming platformer that would be much better without some bad design choices. It gets boring quickly though, world two being the dogshit the Roomba picks up and smears all over your laminate flooring while you sleep.

Super Wiloo Demake
5 Overall
Pros
+ Easy platinum on both PS4 and Vita
+ Controls are responsive
+ Cheap with Vita crossbuy
+ Dev tacitly acknowledges some levels are a little challenging with free unicorn
+ If you get past world two, it gets better
+ Looks good on Vita at least

Summary
Super Wiloo Demake is a well-meaning indie platformer that fails to be anything but derivative and a little generic. One to grab if it’s on sale. There’s better Ratalaika games to spend your money on.