Baseball games have been somewhat monopolised by Sony with their highly successful MLB The Show series. Whilst it does allow plenty of room for alternative to spring forth, it still feels somewhat rare for a developer to bring America’s pastime to consoles. Metalhead did just that with Super Mega Baseball and, after some success, a sequel has arrived for us to take a look at. 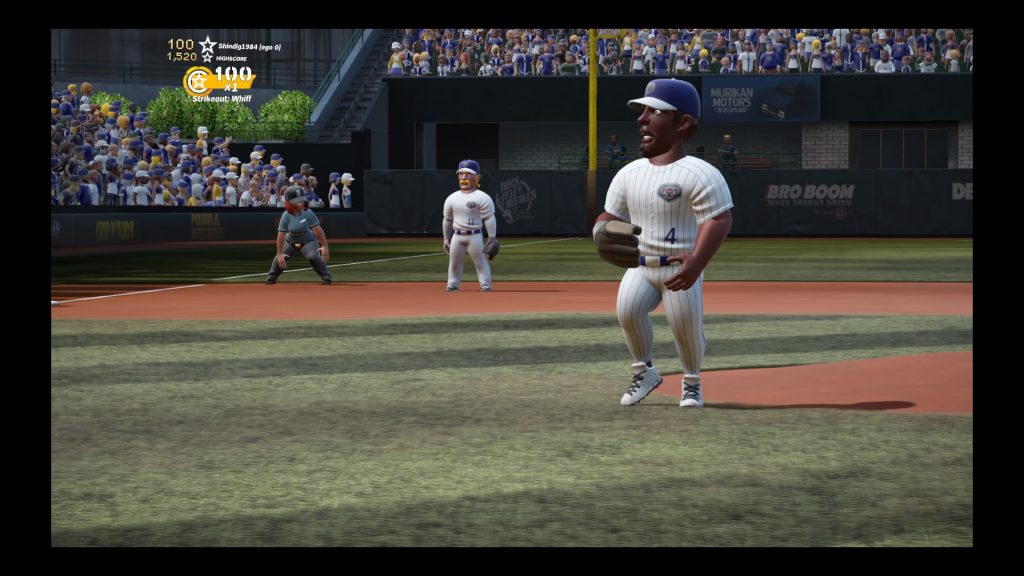 Setting itself apart from Sony’s juggernaut,visuals and presentation aim towards an exaggerated, big-headed player appearance with some vibrant locales to play ball in. It’s vibrant with the players showing plenty of character and big moments being given the right kind of flourish. It doesn’t feel overstated and sometimes can feel toned down. The stadiums are nicely detailed with some monolithic background elements that can sadly get lost as you focus on a game.

There’s an accessibility to Super Mega Baseball 2 that I like. As someone that doesn’t steep himself in baseball games, venturing into one after several years can be daunting. Luckily, this is easy enough to pick up and play. The game lacks a dedicated tutorial mode but tips will pop up as you play matches. It’ll chime in whenever it thinks you’re being too predictable with your pitching or if you’re being too leisurely between the bases. It’s not intrusive to start with but there also appears to be no option to disable these notifications. Options are light in general with only the audio volumes being adjustable from the outset. If you’re the kind of person who prefers minimal information on screen, you’re out of luck. 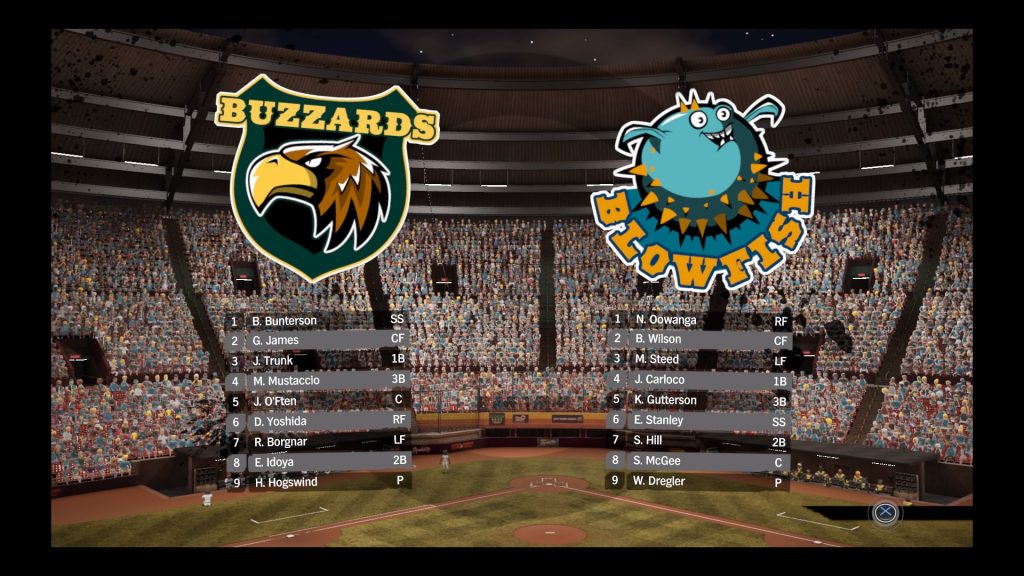 Pitching and striking is timing based with standard and more powerful variants available on the face buttons. Those familiar with baseball games will be comfortable and newcomers do get some handy assistance at lower difficulties. Batting at easy levels does allow you to focus on timing as the AI takes control of your positioning. You can still manually control it but it helps novices get a push in the right direction. In addition, there’s a real focus on picking what balls to swing for and what to leave. There are moments of tactical decision-making, even on lower levels to give you something to consider. Difficulty is gradually adjustable on a scale out of a hundred so you should be able to find a spot in the pantheon right for your ability.

When it’s time to run or throw to bases, face buttons correspond to the diamond quite easily. At times the field can feel smaller as a lot of it feels within reach but there are definite moments where sure catches inexplicably don’t materialise. Those moments of idiocy from the AI can prove a little jarring. You’re always going to notice that with ball games and Super Mega Baseball 2 can’t quite escape it. 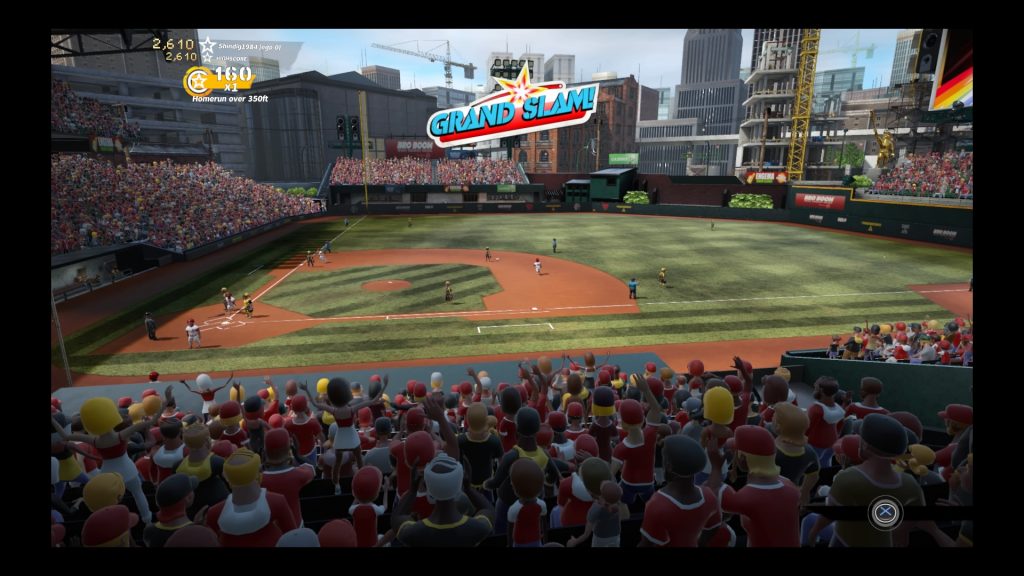 For a game presenting itself in such an arcade manner, there’s a few simulation hooks that sneak their way in. Player fitness and form play a part with players gaining in confidence as they strike-out batters or make some good contacts. Fatigued players can be substituted although it does seem like players can go longer than you expect. Maybe this gets tweaked in higher difficulty levels but my pitchers seem to go on forever.

Modes don’t push the boat out. You have standard exhibitions and championship modes with a pennant mode acting as your play-off/knockout tournament option. There’s no home run derbies or sudden death modes to freshen things up. It’s not necessary but, with the cartoon visuals, you get a surprisingly grounded package. There’s very little in the way of gimmicks and the aesthetics prove to be just dressing on an otherwise sound and faithful representation of the sport.

Multiplayer is accessed through the party menu and offers opportunities for online and offline party play. All modes seem to accommodate the system but online efforts against strangers seems to be limited to the pennant race. This is your solitary option for ranked play and, despite the option of cross platform play with PC users, I’m struggling to find a match. Your best bet for competiton, at least at this early stage, is to find some like-minded friends and play ball. 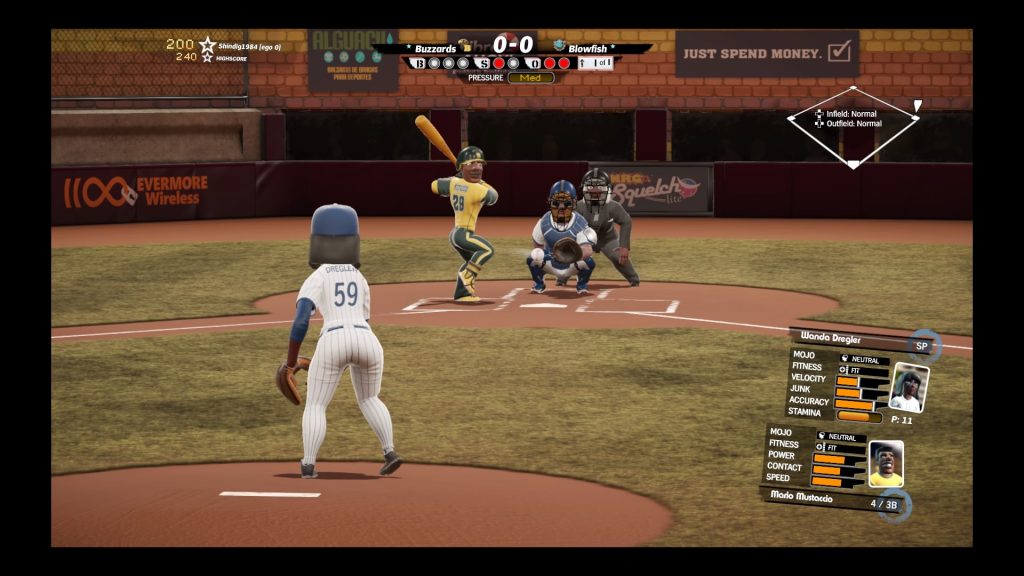 As an unlicensed product, Metalhead have given players the option to edit teams and rosters to their liking. It goes surprisingly deep with preset elements being mixed and matched to create some interesting results. Player attributes can be amended and I suspect those that want a more authentic experience could sink the hours into that pursuit. There’s 16 teams in total but you can add your own edits into the league system. There’s a wealth of options on offer but it’s a shame there’s no ability to share your creations with other players.

Super Mega Baseball 2 has managed to present a fairly accessible alternative to Sony’s juggernaut. Whilst the online opportunities feel limited, there’s a decent single-player component which just the right amount of depth to appeal to fans and newcomers alike. Fatigue and fielding can feel a little out of whack and the options are bare. However, the ability to customise players, teams and difficulty does give you a lot of room to experiment and tweak.

Super Mega Baseball 2
8 Overall
Pros
+ Very accessible for newcomers.
+ A wealth of customisable options.
+ Deep enough to rope fans in.
+ Bright, light tone and aesthetics.
Cons
- Online component feels limited.
- Lacks a tutorial or practice mode.
- Fielding AI can have some curious moments.
Summary
Accessible but with a surprising level of depth, Super Mega Baseball 2 has managed to improve on the original with a very customisable experience. Some AI fielding anomalies aside, the sport is well represented in a bright fashion whilst remaining grounded enough to appeal to fanatics. It's a shame the online component is so limited but solo players can enjoy what is robust package.