We reviewed another lightUP game a couple of months ago in Super Wiloo Demake.  Also published by Ratalaika we have Super Box Land Demake.

In this instance what we have here is a Sokoban-like with a retro look and a rewind mechanic. To stop you pushing a block prematurely you have to push

before moving a block. It’s one way to stop you messing up before you’ve even got started. 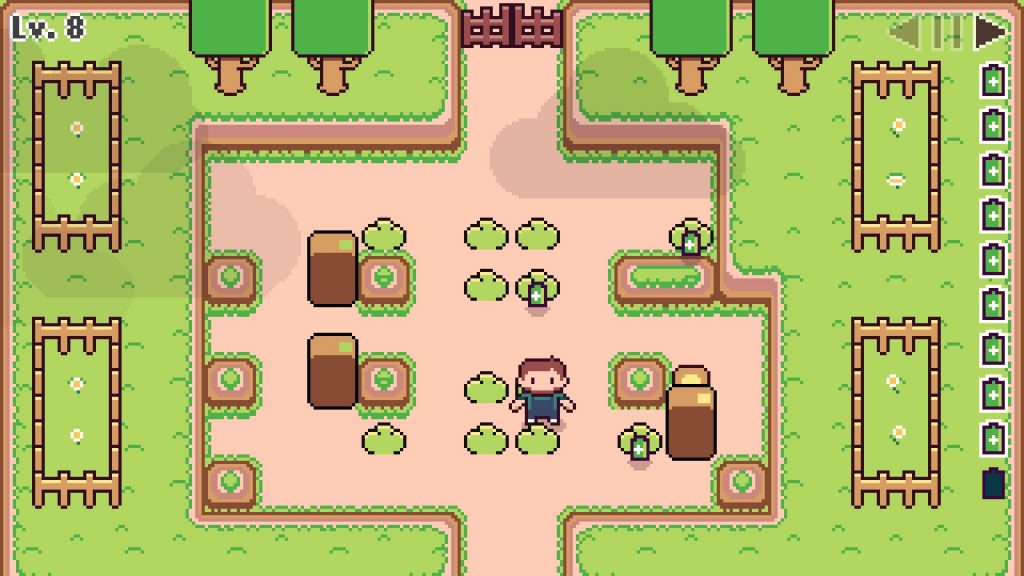 Early levels are straightforward almost without exception, but later on you’ll do well to consider your plan of action first. Unlike similar game Pipe Push Paradise the blocks are simply square blocks that can be pushed in any direction. Subsequently this is far far easier than PPP was. On levels with lots of blocks on one side you’ll generally find a path you’ll use over and over again, the only difficulty being final block placement.

The rewind is quite cutely done, hold down

and you’ll advance back however long you keep the button held. This is applied with a VHS style filter that lets you step back a little bit, but not too far as your power is limited by battery charge. It’s a contrivance, sure. But a handy little tool to stop you having to redo a level all over because you’ve just pushed your monolith into a wall you can’t unstick it from. Though if you get irredeemably stuck, there’s nothing to stop you restarting the level anyway. 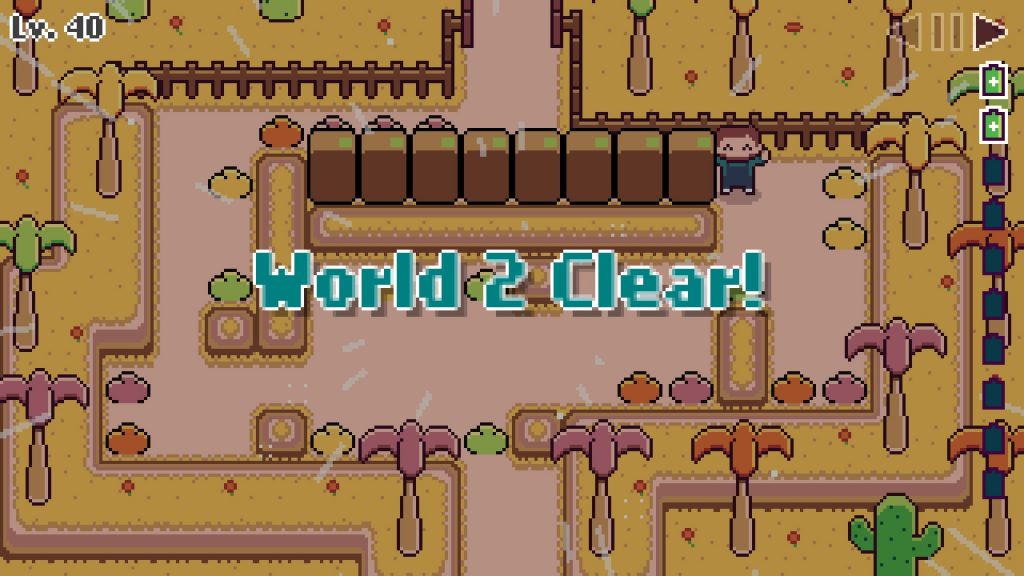 It sort of renders the rewind function a little redundant as you can drop back to the main menu with no penalty if you mess up. Oddly there’s no actual way to restart a level beyond exiting to the main menu and going back in via your save. It’s a weird design choice whether deliberate or by omission anyway.

This being a Ratalaika game, it’s also playable on PS Vita too. The Vita port is pixel perfect and there’s as much game here as on PS4. It’s just as well suited to play on the move as it is on a TV. This adds to the value package as usual. Typically though, as we’re on Ratalaika you’ll be done after forty levels with regards the trophies. However, when we played on Vita we happily carried on playing for load more levels. Between worlds you also have a short shoot-em-up section to replenish your batteries. It’s a fun little diversion. 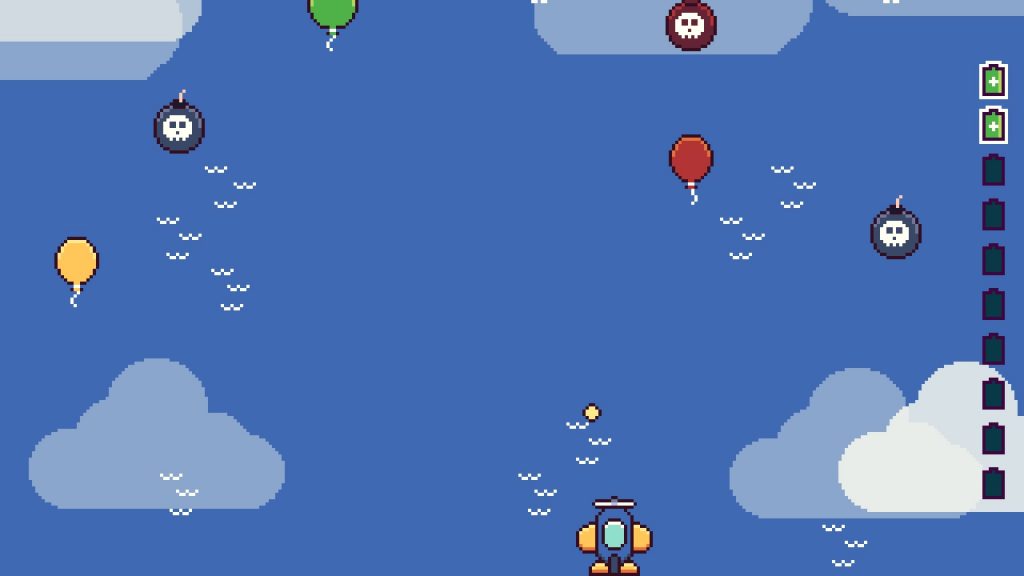 There’s a multiplayer option of sorts, being activated by tapping

. You can even activate this on Vita. We can see this getting very silly with the d-pad being player one and the right thumbstick being player two. All a second player adds is the ability to finish a level slightly quicker. But it’s rare to see local  multiplayer on Vita of all things.

There’s an option in the settings to switch on a clock to show your cumulative time too, perhaps lightUP are courting the speedrun community. Once you’ve finished a level you’ll have little reason to return to a level otherwise, so a speedrun might be the right approach. Unlike early XBLA standout Braid there’s no trophy linked to finishing within a certain time. One option you will definitely switch off is the music. It’s repetitive to the point of distraction. 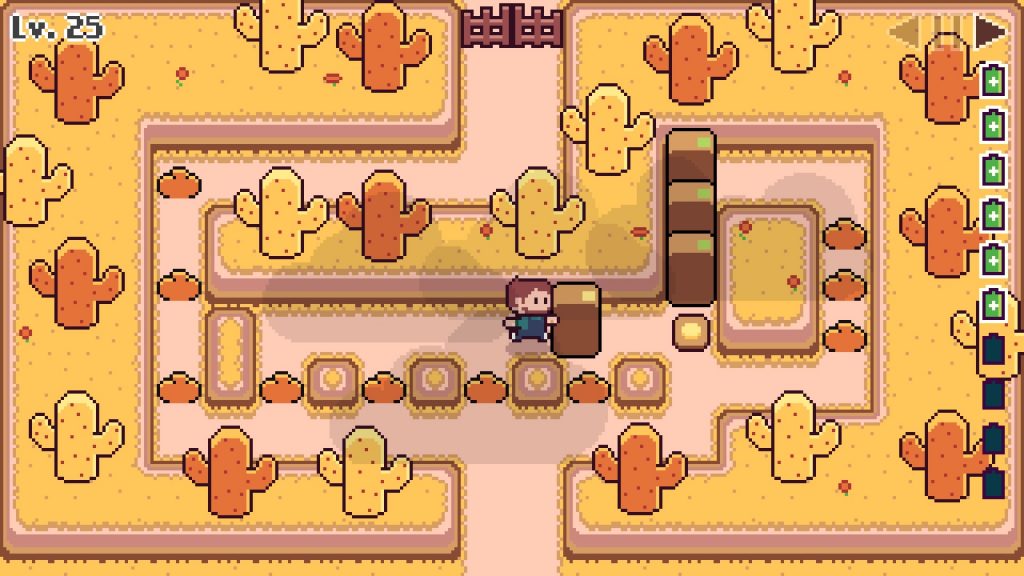 All in then, Super Box Land Demake is a solid effort. We’re still not sure demake is being used in the right context, but anyway. The Vita version is great extra value and local multiplayer on Vita or one PS4 joypad is a fun approach.