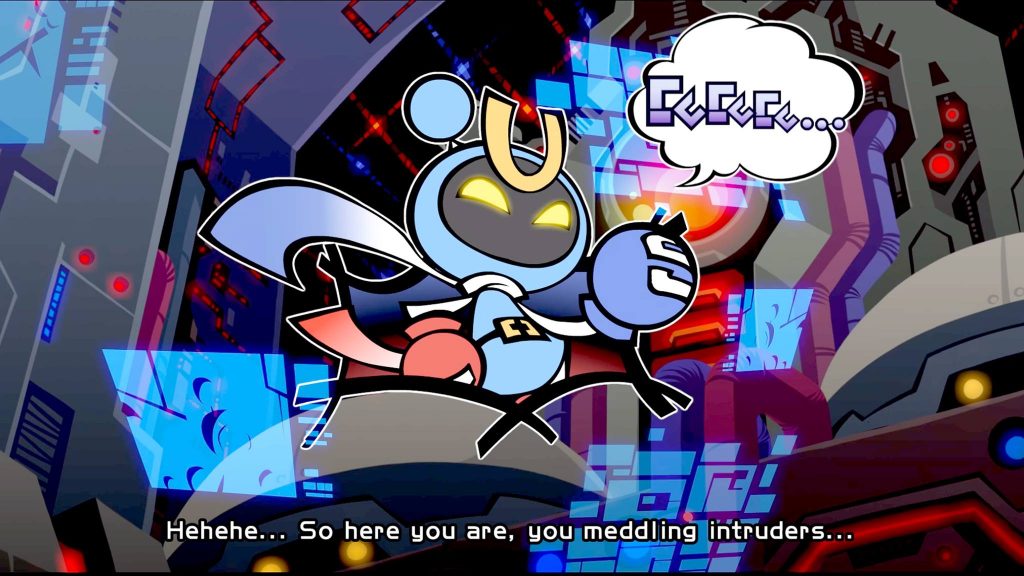 In the age of wanting more, it’s hard to reason how a Bomberman game can exist as a full priced retail release. When Super Bomberman R first launched, it did so as a Nintendo Switch title, with the sticker shock that came with being an early game on the platform. This was a tough sell, as with any Bomberman title there just wasn’t that much content to go around. Sure, it had a single player mode, the franchise famous multiplayer battles and a completely in-game item shop for those who wanted to grind for more. But at £50, it was a bit much for what was a to-the-point retro retread, similar to the many others that have appeared on any console from the NES onwards.

A year has passed since the initial launch and although I do own a Nintendo Switch, the price to content ratio was what put me off from jumping in. There was also that sticking point regarding online gameplay, Bomberman is always best when played with a few mates and voice chat, something that the Switch is lacking somewhat thanks to its lower install base amongst my friends and the archaic voice chat system. Thankfully, Konami has seen fit to shed the Nintendo exclusivity and have released the game on PS4, addressing most of the previous setbacks while also reducing the price to sit firmly in the considerable region for fans of the series. 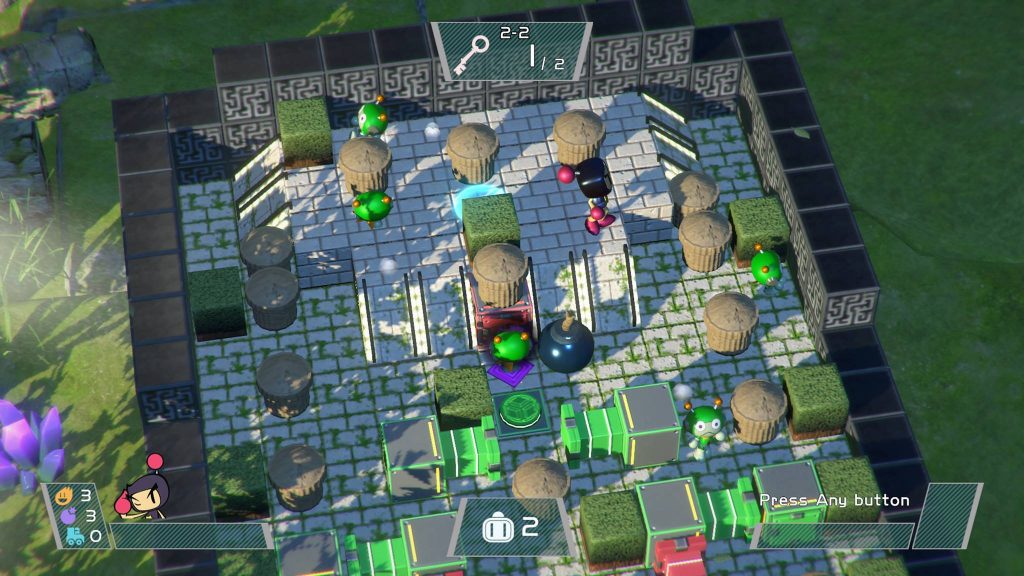 Super Bomberman R is quintessentially a Bomberman title. The series may have been around for some time but there is still something unique about the gameplay angle of blasting yourself through an increasingly destroyed maze as three others do the same in a bid to be the last Bomberman standing. Very little has been done to the formula, which is as much a detractor as it is a welcome element. There have been many times in the past where Hudsonsoft have tried to mess with things, such as adding the Louies’ to Mega Bomberman or trying to make turn the game into a 3D platformer on the N64. Very rarely do these changes go down well when most players will predominantly play on the classic stage with none of the gimmicks found in single player modes. However, this comes with a balancing act as this is still very much the same game we have been playing for the past three decades. All in all, it stands as a testament to just how fun the Bomberman formula is that it is still here despite this.

One of the biggest drawbacks of being a very good multiplayer title is finding out how to add value when friends are not around to have a go. Oftentimes Bomberman games have attempted a single player mode and these are generally little more than planned skirmishes with enemies that wander along set patterns that pose little threat. Super Bomberman R doesn’t venture far from this, however there are some differences that make the single player a good diversion. Storyline wise, it has a bit of a Saturday morning cartoon vibe, where a group of heroic Bombermen with their odd traits must venture out and take down five dastardly bombers who are wreaking havoc on several planets. Each planet has a theme which permeates through the stages, such as a theme park planet that has icey sections due to the boss Bomber’s messing with the terraforming efforts to revert it back to an arctic state or a digital world that reasons the typical bombing gameplay as hacking into a mainframe. 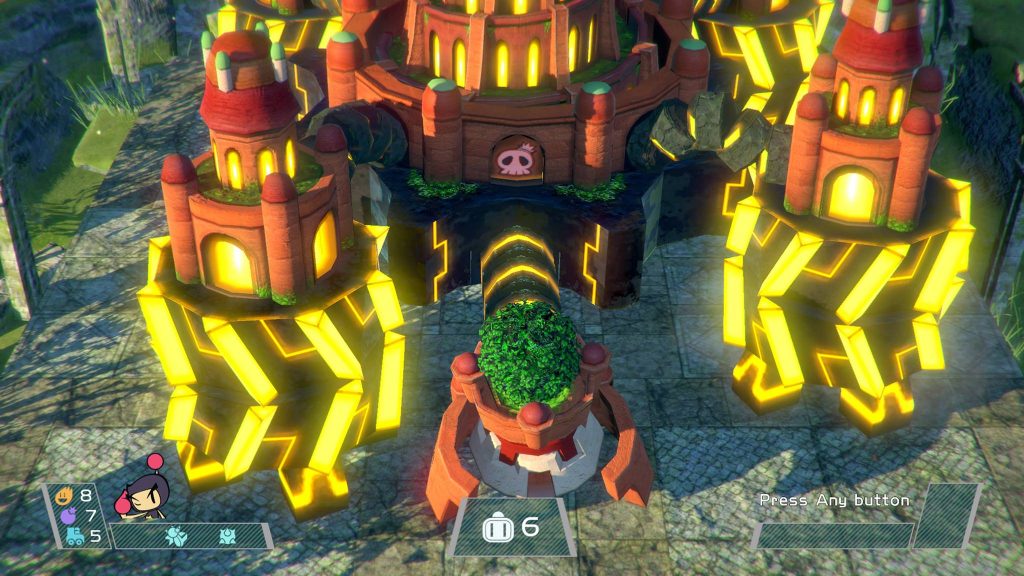 The single player mode is further broken up with boss fights and a variety of different mode types that range from the standard bombing, collecting keys from blocks, timed survival and escort missions that see you rescuing citizens from the various creeps that wander the paths. These do a pretty good job of making sure that the game does not get stale as quickly as it could, but one thing that I did notice was that on normal mode (labelled Veteran mode) is actually pretty tough. The speed in which your enemies move around the screen makes it quite difficult to attack them effectively and in levels where there is an infinite enemy spawner the screen fills up with colourful deathballs that it becomes a nightmare to survive, let alone see what is going on. After a while of seeing the ‘you failed’ screen over and over I had to switch things down to Beginner and the difference is night and day as enemies move much slower and you have a far more forgiving continue system.

Throughout Super Bomberman R, no matter which mode you play there is a currency that you can earn that ties into just about every facet of the experience. With this you can purchase unlockable Bombermen, stages, accessories and buy more chances at getting through the singe player mode. At first you start with a simple eight arenas to fight in for local multiplayer, but this is further expanded by a further ten. This currency has every opportunity to be exploitable for nefarious microtransaction gain but thankfully Konami has resisted the urge to make this hell on your wallet. However, there is quite a grind in front of you to unlock everything and this system seems to exist purely to pad out the game in lieu of actual variation. 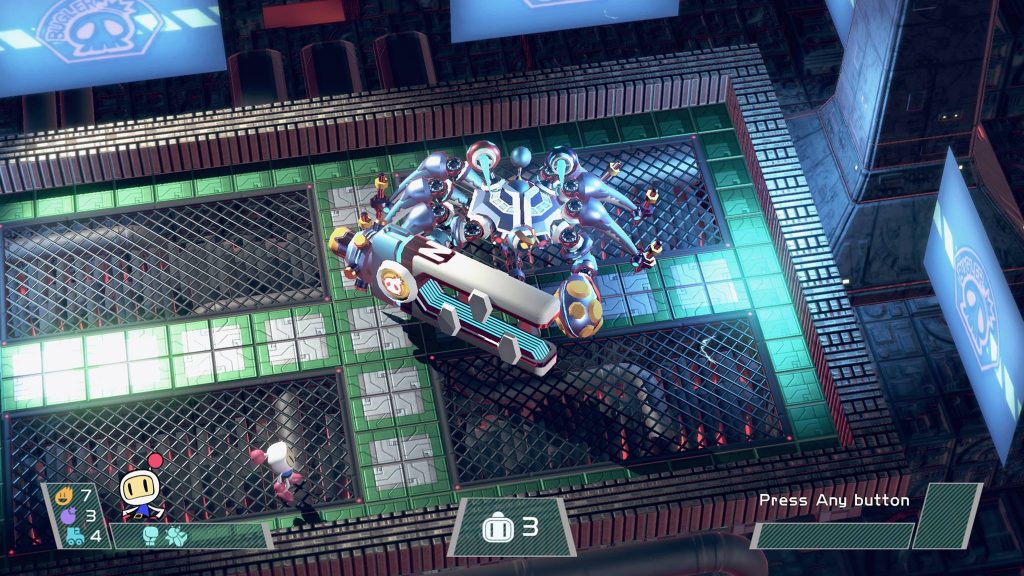 Single player and grind aside, the main meat of the experience is still very much within the multiplayer mode and the gameplay remains as fun as ever. There are a couple of ways to approach this. You have the classic battle mode which sees up to four players battling it out on a grid for supremacy and the brand new Grand Prix mode which is a team-based affair. Both modes are fantastic, Grand Prix being one that provides the team dynamic superbly. The only issue I have however is that sometimes online can be jittery when you connect with a host that has anything less than a perfect connection. A couple of games that I played were noticeably snail paced for all but the host player which causes a big disadvantage for anyone else.

Luckily issues are few and far between and Super Bomberman R  feels so much more like a complete package compared to the original launch on the Nintendo Switch. At the newly reduced price point and a year of hindsight, it not feels like an experience worth the price. However, this still comes at a caveat. The game relies heavily on people not being overfed on the Bomberman formula and having others to share the experience with. Get over these hurdles and you will find a good time here though.

Super Bomberman R
7 Overall
Pros
+ Multiplayer Bomberman remains as moreish as ever
+ Plenty of content to unlock
+ Feels like much of a complete experience thanks to a year of free updates on Switch
Cons
- The single player mode can feel excessively tough at times
- As with other Bomberman titles, this is not nearly as much fun playing solo
- Some jittery online moments
Summary
Super Bomberman R is very much a Bomberman game. It does little new for the franchise but excels in what the franchise is known for, which is being a fantastically moreish multiplayer free-for-all that always begs for one more go.