Real-time strategy (RTS) games can work on consoles. Some may argue otherwise and there’s no denying that a mouse and keyboard is the ideal way to play them but with enough effort and clever use of a controller RTS games are definitely playable. Then the question comes down to whether it’s worth playing, as Sudden Strike 4 is released on the PS4. 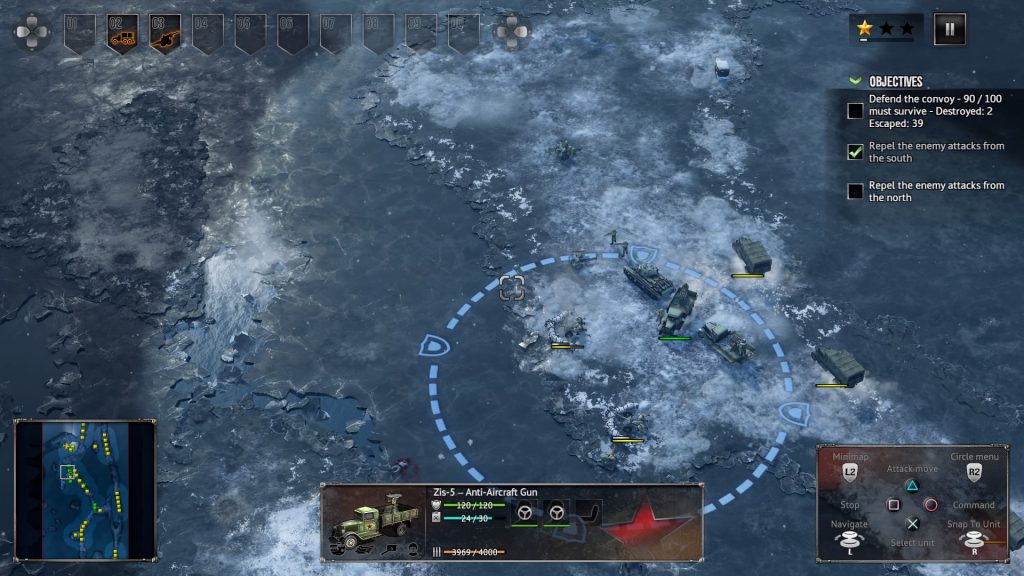 As the title suggests Sudden Strike has been a series for a while on the PC, starting with 2D sprites for units back in 2000. I have to admit to not playing any of the previous titles but from what I understand this new release follows the basic gameplay elements of those older titles closely.

Set in World War II there are three campaigns to choose from, each with seven missions. There’s a German campaign, a Russian one and an Allied one. Each have missions based on real life operations and some missions will overlap, with one campaign having you trying to take a location whilst another might task you with defending it.

Unlike certain RTS games you may be used to there is no base building in Sudden Strike 4, you are given a set number of units and you may gain reinforcements at predetermined times during a mission but that’s all you get. Hit a particularly nasty ambush and you can say goodbye to your chances as you simply won’t have the resources to compete. Careful use of your units is the order of the day and each type of units has its strengths.

Infantry will take out other infantry quicker than a tank will, so if there’s some infantry manning an anti-tank weapon then sending in some soldiers on foot to take them down will be more effective than rolling a tank up on them. Infantry also have a wider field of view than a tank so will be able to spot enemies from further, safer distances. Flanking enemies is also incredibly powerful, with tanks being weaker on the rear. There are different types of units within these units types as well which will be more effective in different situations. Also of great importance are the repair and supply trucks as units will take critical damage to engines or tracks, have limited ammo and will need refuelling. 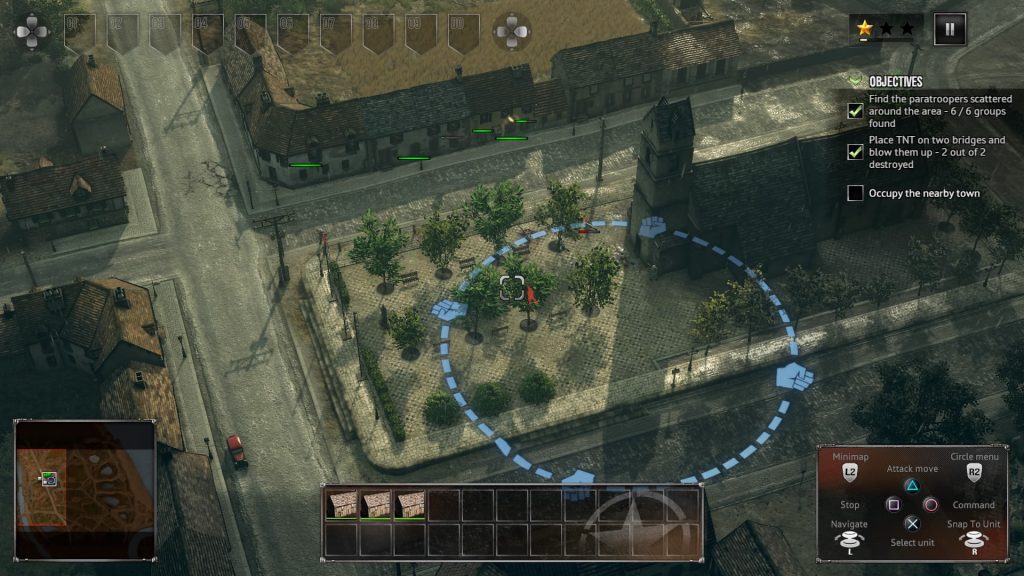 Here’s where the controls come in. Upon starting a level the game will automatically set up a couple of groups for you to cycle through with the dpad. You can highlight an individual and press the cross button on them to select them or hold the button and move the left stick to enlarge a circle over multiple units. Clicking in right stick will create a group out of the selected units and this will be an important skill you’ll need to use. Selecting units on the fly is not possible (although you can pause the game at any time and continue giving instructions by pressing the touchpad) so setting up your groups to allow you control multiple units effectively is incredibly important. I liked to have similar units grouped together which unfortunately isn’t a default option so will require you to select all tanks/infantry/whatever separately before grouping them manually.

You can assign specific instructions to units with a radial menu on R2 which will allow things like poking your head out of the tank for an increase in viewing distance or having infantry stand up or lay prone on the ground. The controls on the whole work well, though they take a little getting used to. Most of the time the circle button is the select button for orders, for example, whilst at other times (such as calling air strikes) cross will select whilst circle will cancel. Not game breaking but something that takes some adjusting to.

Being able to save at any time gives you a safety net if you do slip up on the controls or, more likely, just make a tactical mistake. Unlike something like Command & Conquer where you can overwhelm your opponents with numbers Sudden Strike 4 feels more like a puzzle game, where there’s a less well guarded area that you need to find and attack, or a more efficient order to progress through the mission in. This was both frustrating and rewarding, as you’ll bump your head against the same wall constantly and not make any progress at all, but perhaps taking a different approach will grant results. One false move can see your units wiped out pretty quickly and I found that playing a level again, knowing what to expect meant I had a better idea of where to place my units. Enemies spawning from off the map and coming into the battlefield was a feature I didn’t really enjoy as you can’t be expected to account for that possibility. 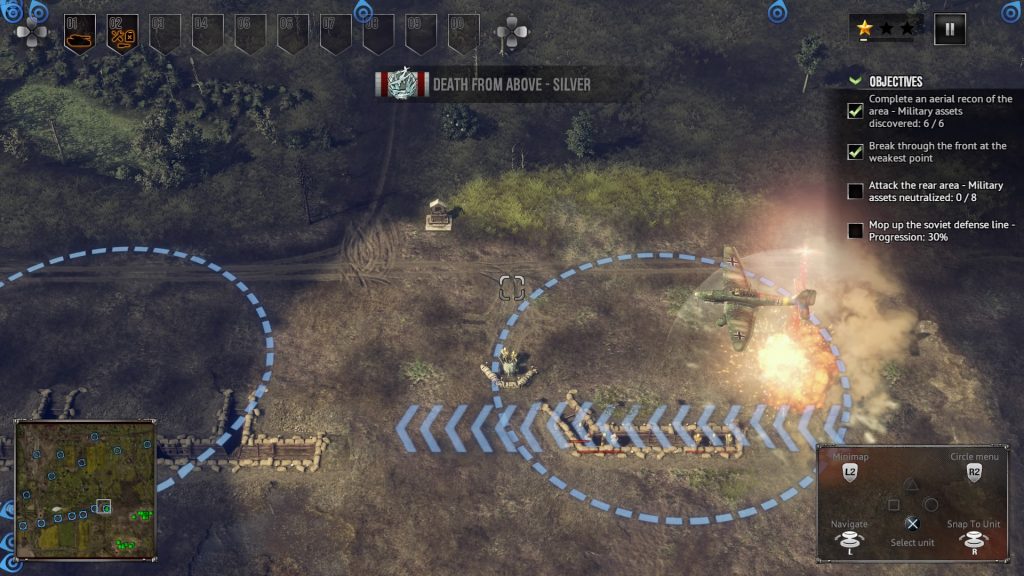 As you complete levels you’ll be awarded up to three stars based on your success which can be used to upgrade three commanders. Before a level you can choose which commander to use which basically applies buffs to certain units such as having a couple of grenades at the start of battle, being able to repair critical damage without a repair truck or allowing tanks to deploy smoke. You can move the points around as you see fit to try different styles of play and it gives you an incentive to go back and try and three star levels. You can earn an additional fourth star if you complete a challenge version of a level which will add a stipulation for you to overcome.

Beyond those twenty-one levels you also get a skirmish mode which pits two sides against each other and an online multiplayer mode which allows up to eight players split over two teams to battle it out. You can’t argue with the amount of content in the package and assuming you don’t three star every level first time there’s some replayability to be had in the campaign too.

Technically the game looks nice as your army rolls across fields, knocking down trees and blowing things up. The game can stutter every now and then which is unfortunate but it’s far from constant. Load times can be a little too long, though I’ve seen worse, and the path finding on your units can be moronic at times, simply repeating the same manoeuvre over and over and not making any progress requiring some manual input. 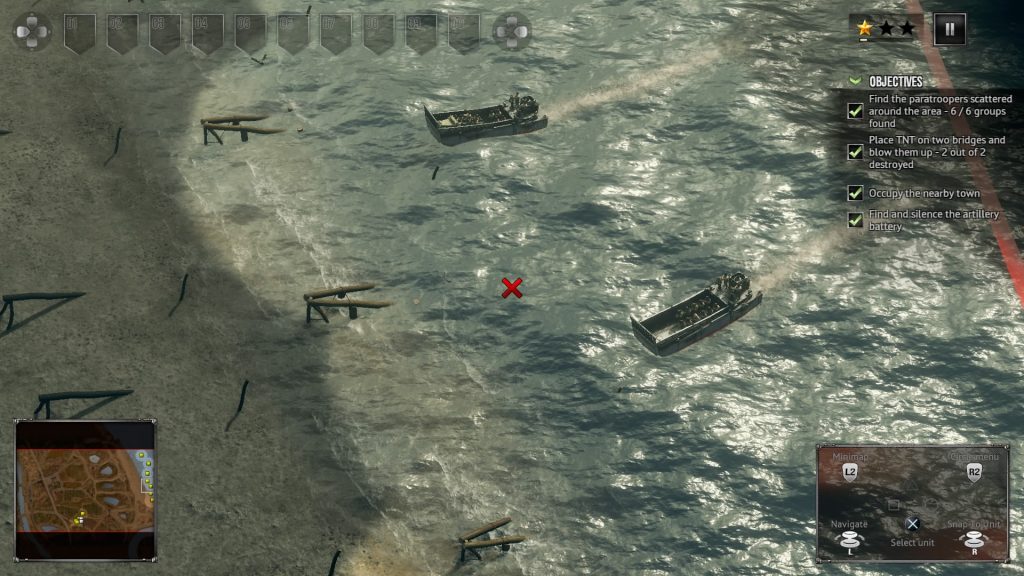 So, going back to my first paragraph, is Sudden Strike 4 worth playing? It will appeal to a niche audience, one that will enjoy this type of game but also doesn’t have access to it on the PC, but the tactical nature of the gameplay, the almost puzzle like solutions required to make it through a mission will reward those players that have the patience and nuance to challenge them.

Sudden Strike 4
7 Overall
Pros
+ Challenging levels
+ Controls well, if not perfectly
+ A good amount of content
Cons
- Gameplay doesn't allow for much improvisation
- Very difficult at times
- Some technical issues
Summary
Sudden Strike 4 makes a fair attempt at bringing a more realistic real-time strategy game to the PS4. The controls aren't perfect but do a decent job, it's the specific way levels need to be approached that may put off players. If you treat levels as a puzzle that needs to be solved then you'll find a, sometimes frustrating, rewarding experience.