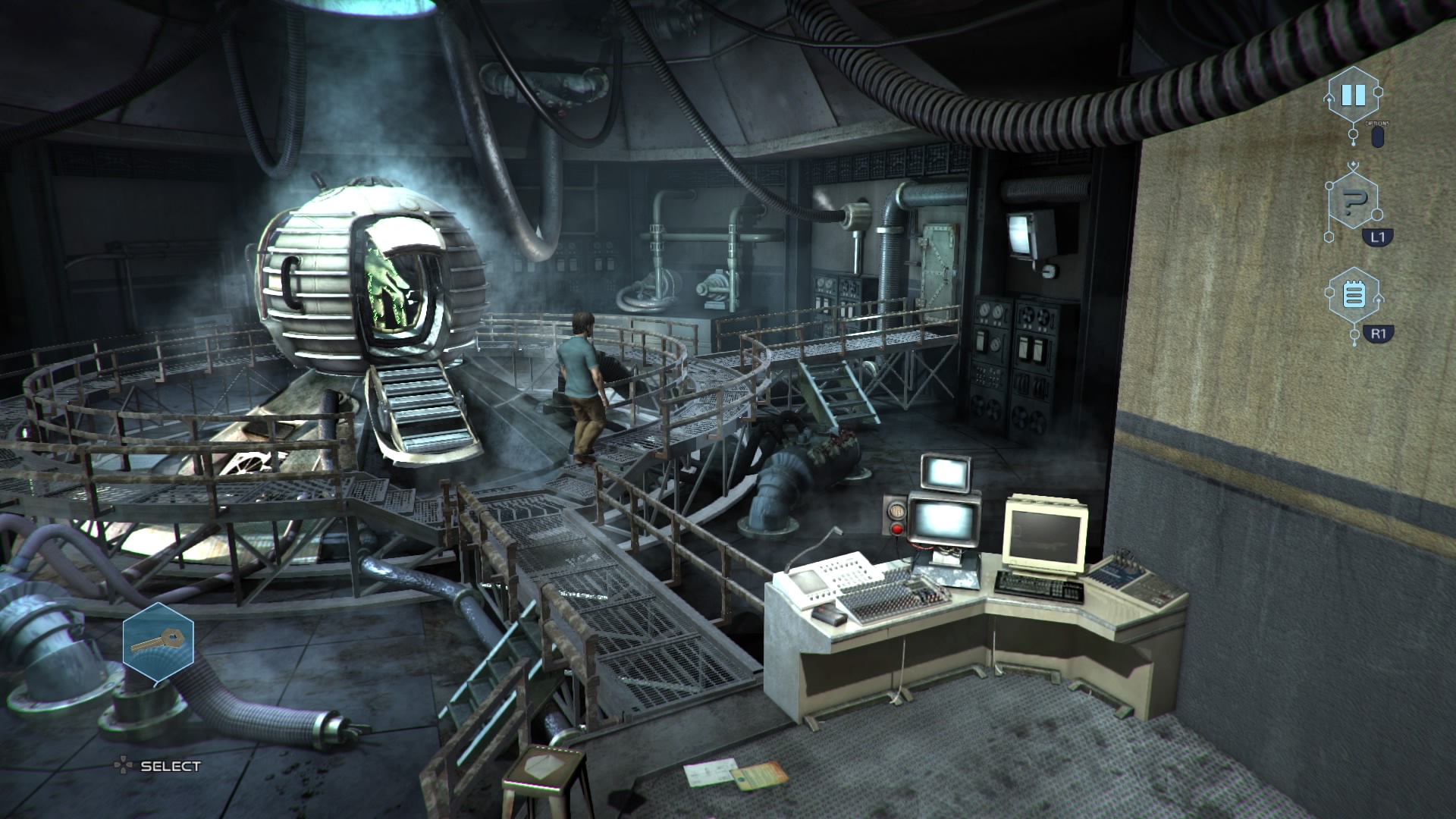 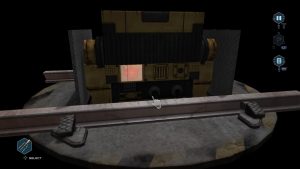 Subject 13 is Paul Cuissets’ newest game, who you may or may not know as the creator of Flashback, as well as others. Now, I liked Flashback in its day with its style and atmosphere (or at least half of it, I only really remember up to the futuristic game show) so was interested to see what this adventure game could offer.

You play as Franklin Fargo, a scientist. At the beginning of the game he tries to kill himself after the death of his lover but wakes up in an underground lab. A disembodied voice calls him ‘Subject 13’ and gives the only guidance he has, to use his intelligence to make progress.

Progress is hindered by many varied puzzles. You can walk around using the left analogue stick and anything that can be interacted with will become highlighted as you approach and a prompt will appear. Holding the X button will bring up a wheel which, depending on the object, will allow you to look at, pick up or take a closer look. Getting in closer will sometimes load up a more detailed area that allows you to rotate the object or interact with little details.

The puzzles range from picking up an item and using it somewhere to logic puzzles. Things start off simple enough with limited items and few things to interact with, but ramp up as you move through the game’s four chapters. You’ll be combining multiple items, the items themselves can become puzzles and things can get complicated. 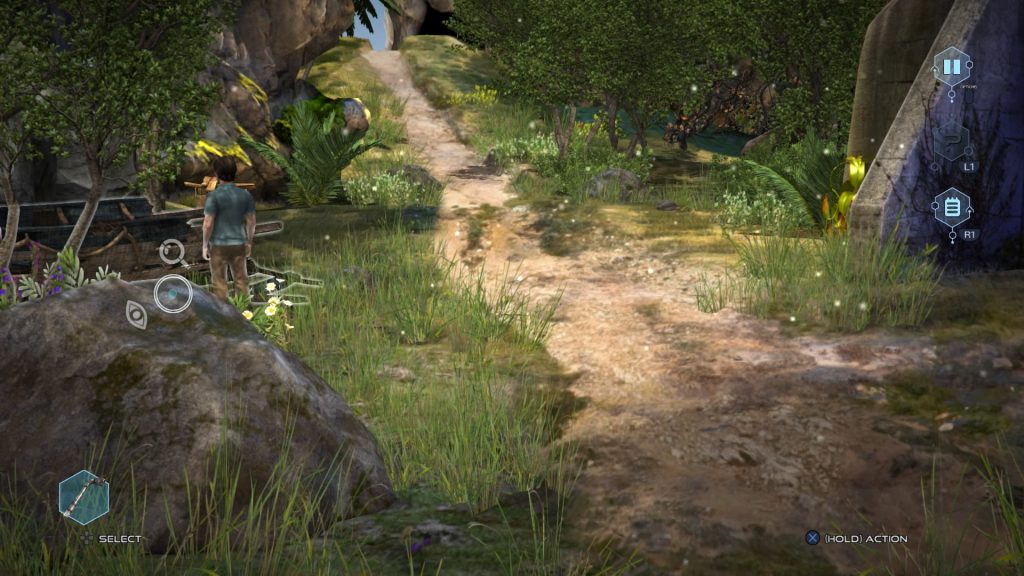 There’s no problem with that of course, you want to be challenged as the game is relatively short at around five hours so to breeze through it wouldn’t be very satisfying. Unfortunately Subject 13 doesn’t give you a whole lot of feedback. Early on this isn’t too troubling but later on when there are multiple puzzles in one area things can get a little messy. There were times where I’d solved a puzzle but had to disengage for the puzzle to complete, but not knowing that I just kept trying which is disappointing.

You can go back and interact with puzzles you’ve already completed which again makes you wonder if you’re missing something and the whole thing lacks polish, like dialogues not changing if you inspect something you’ve already used. There is a hint system (although there’s a trophy for not using it) but the game should have more guidance through character dialogue to show you are making progress or in the right ballpark.

I didn’t particularly find the puzzles to be that rewarding either. Maybe it just depends on where your strength lies but the more visual puzzles I found to be quite easy, others I would complete by accident whilst some seem unnecessarily obtuse. You end up just trying to use everything on everything else and finding what you can interact with basically boils down to ‘window washing’ too as you move your character/cursor to every part of the screen.

I also want to mention the final puzzle which basically boils down to a massive game of Minesweeper which takes a ridiculously long time to get through. There’s a trophy for completing it within twenty minutes, which I didn’t get. Can’t wait to try that one again. Oh, and you can’t manually save or go back to checkpoints or chapters so it’s lucky I made a backup of my save isn’t it? 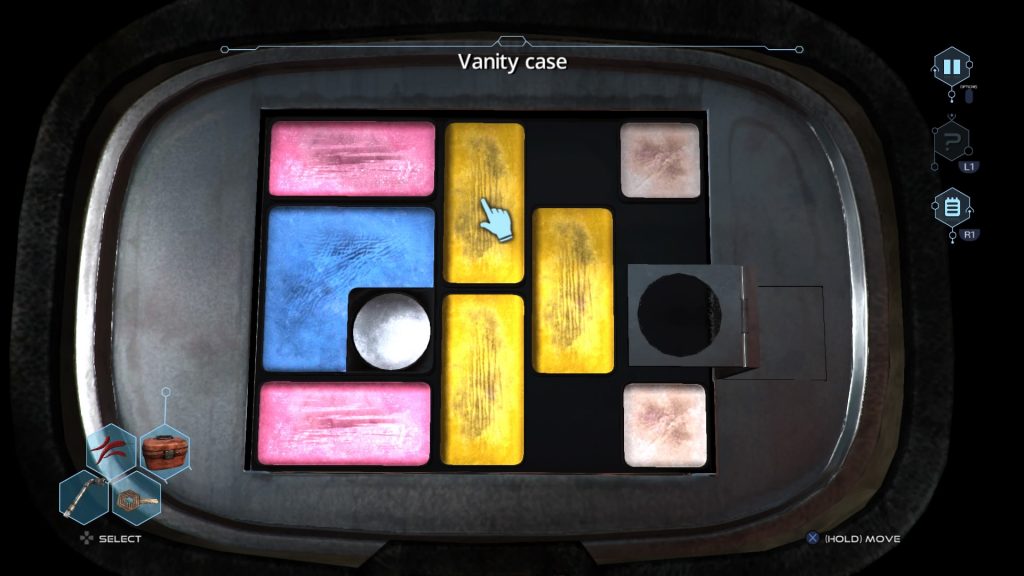 The controls for moving Franklin could have done with more work too as he constantly gets caught on objects (the game has a fixed camera) and if you try to run then there is some animation priority which is unnecessary for this type of game. It’s not like the animation or visuals in general are that great so perhaps a point and click style cursor interface would have been better as I believe it had on the original PC version.

Another annoyance as things went on came from using items. You use the d-pad to access things in your inventory which is in the bottom left of the screen, if you select an item to use then rather than appear where you cursor is (usually pointing at the thing you want to use the item on) it starts in the bottom left of the screen and you have to move the cursor all the way back to where it was. Also as the d-pad accesses the inventory you can’t use the d-pad for anything else, even the main menu. Selecting menu options or puzzle elements with the analogue stick is far inferior to using the d-pad and did lead to frustration at times.

The whole game is voice acted although the quality of the performances is questionable and the dialogue often varies from the subtitles too, though not too drastically. There are only two actors to voice multiple characters which leads to confusion and the story they’re working with, though initially intriguing, eventually peters out before the game’s conclusion. The music is decent but you’ll be hearing the same couple of tracks throughout. 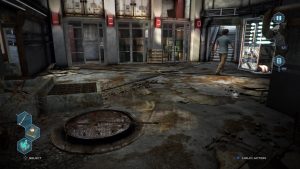 Subject 13 is an okay puzzle game. If you’re a fan of the older style point and click adventure games or Myst-style puzzle games where your hands weren’t held then you could probably enjoy some short lived fun out of this. If you’re like me and feel games have advanced since then to be a little more user friendly then the lack of feedback and guidance will irritate and maybe even frustrate. After playing I found out this was a Kickstarter game which explains (though doesn’t forgive) the lack of polish and for £5.79 it’s probably worth a look if you’re curious.

Subject 13
5 Overall
Pros
+ A variety of puzzles + An initially intriguing story + Low price
Cons
- Lacks polish all over - Some obtuse puzzles - Story doesn't satisfy in the end - No chapter select for collectibles and trophies
Summary
Subject 13 lacks polish but might just scratch that itch if you're looking for a puzzler that feels like it's from the past. A lack of hand holding will be welcomed and cursed in equal measure but if you're intrigued the price point is right to make it a relatively risk free purchase.