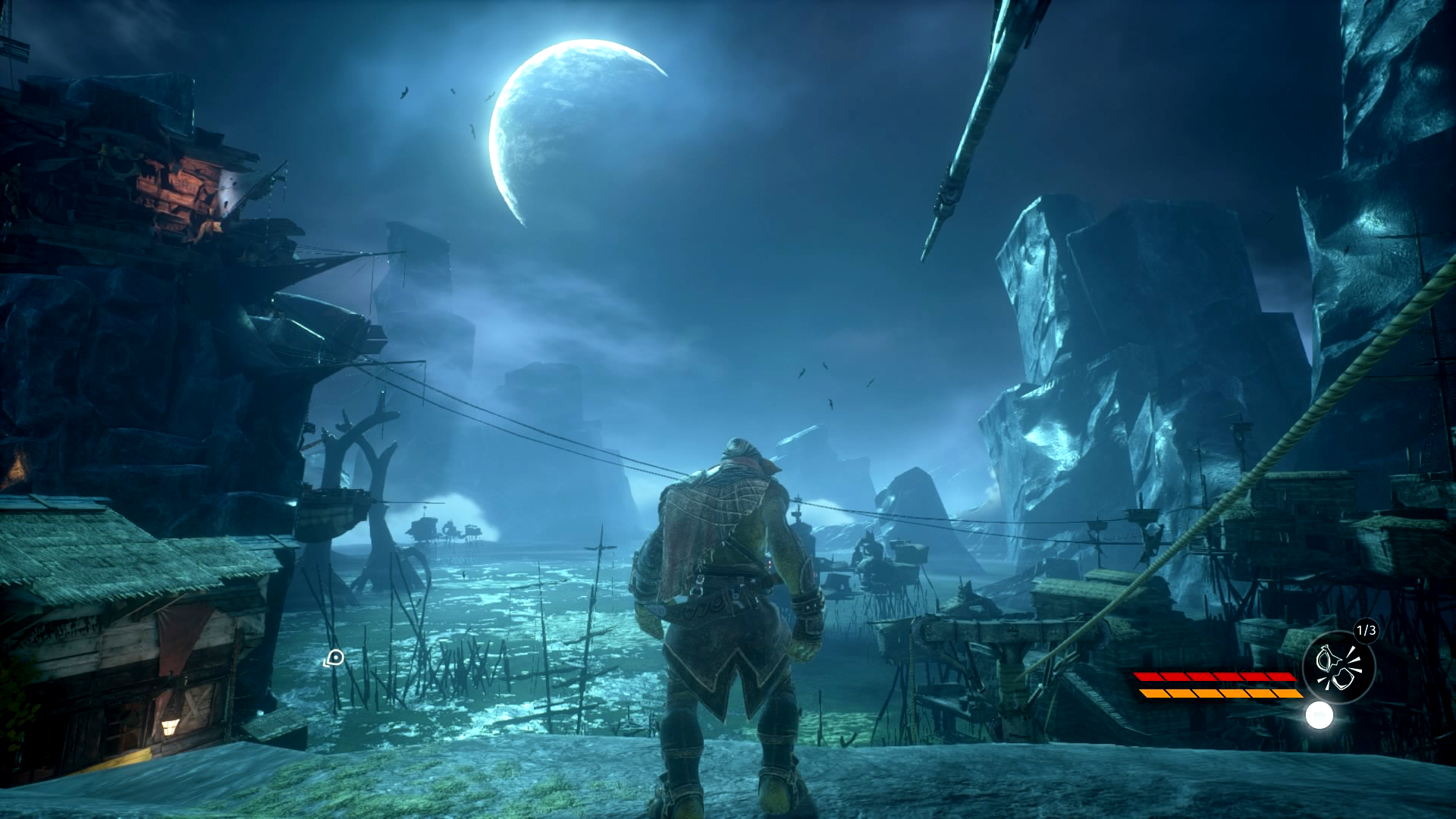 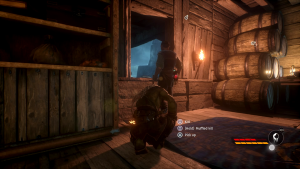 Almost three years ago, Cyanide Studio made the bold decision to take the little green guy from Of Orcs and Men and give him his own series. It was pretty much a run-of-the-mill stealth affair, but the level design was such that you could decide early on whether you were going to take the easier overhead route, or make things interesting for yourself by sticking closer to the ground to mix avoidance with stealth kills. Sadly, the genuinely enjoyable journey was ultimately let down by the ending which, rather than being a mere disappointment like so many other games, was so convoluted, unnecessary, and somewhat pretentious that it did actually turn me off the idea of playing the follow-up when it was later announced.

That said, I’ve never been one to shy away from any challenge, and am a sucker for either killing at a distance (a lesser-known Rage Against the Machine b-side) and without causing a disturbance, so I saw this as Cyanide’s chance to redeem themselves for their bizarre and unrewarding epilogue to Styx: Master of Shadows. In Styx: Shards of Darkness, Saul Jephcott reprises his role as the voice of the titular goblin, continuing with his misanthropic Martin-Crane sarcasm and fourth-wall-breaking wit, but the first noticeable difference with Shards of Darkness is that the hand-drawn graphic-novel style cut scenes have been replaced with regular in-game style animations, making everything feel more fluid and less jarring than before.

Shards of Darkness takes place in the city of Korrangar, a vertically sprawling world of dark elves with just enough gaps and steep rock-faces peppered throughout to make it interesting for our hooded acrobat to traverse. This time around, while the main focus is the high priestess Lyssril’s harvesting of amber on her quest for immortality, we have the introduction of pure quartz as an additional asset. The elves draw supreme power from the quartz, making their weaponry near unstoppable, and Lyssril believes that combining quartz and amber will make her, and her race, invincible so Styx has been tasked to prevent this from happening. As was the case in Master of Shadows, despite Styx being asked to carry out the dirty deeds for someone else, he has his own agenda and wants the quartz shards for himself to further his own powers. 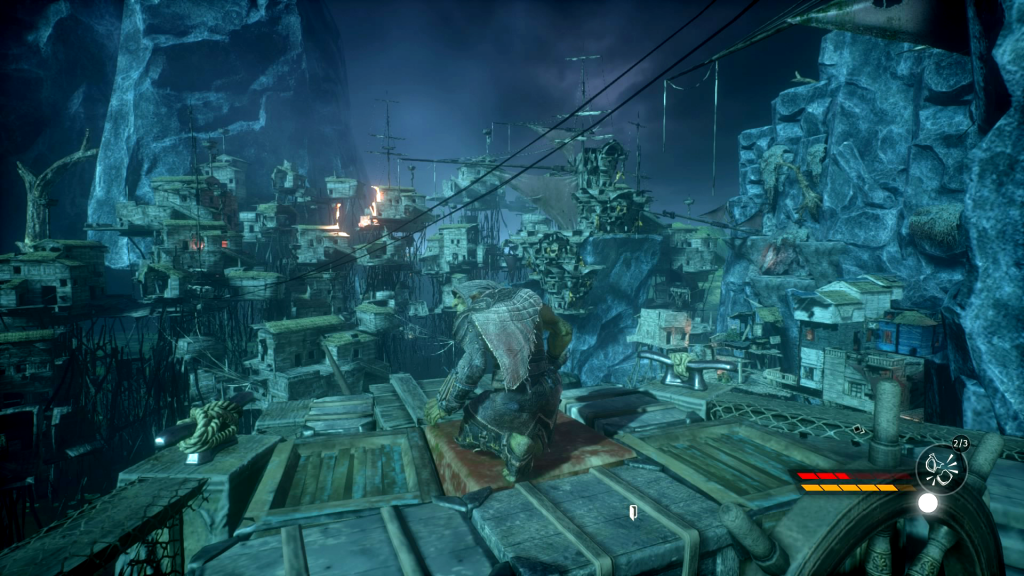 As with any decent stealth game, the environment in Shards of Darkness is not only your greatest weapon, but also your best defence. Crouching under tables to remain unseen for as long as possible allows you to map out the paths of guards, or the movements of workers and citizens alike, and when the opportunity presents itself you have mere seconds to either perform a stealth kill, utilise the shadows to move to a safer location, or risk alerting everyone around by carrying out a regular kill. While it may seem like a stupid thing to do, given that it’s a stealth game, there are times when the muffled kill may not be possible – obstacles between you and the potential victim, for example – and the path to safety may be guarded too closely, so a regular kill is your only recourse.

This, unfortunately, is where Shards of Darkness fails in its execution. Despite the combat in Master of Shadows being so poorly handled, and with so many reviewers and gamers making this point heard, Cyanide Studio hasn’t made any improvement to the combat mechanic for this second outing. If you’re unlucky enough to be detected, the one who discovered you will go on immediate high alert and let everyone around know that you need to be dealt with. As soon as this happens, you’re pretty much toast. This isn’t Arkham Asylum either, where everyone else will stand around waiting their turn while you beat seven shades of shit from the guy who dared call you out; these guys will all attack simultaneously and the best you can possibly do is to parry their attacks until there’s an opportunity to pounce on them for a quick kill. This is fine in theory, if there’s only ever one person, but as soon as that figure creeps up there’s no way to parry one guy while others attack. 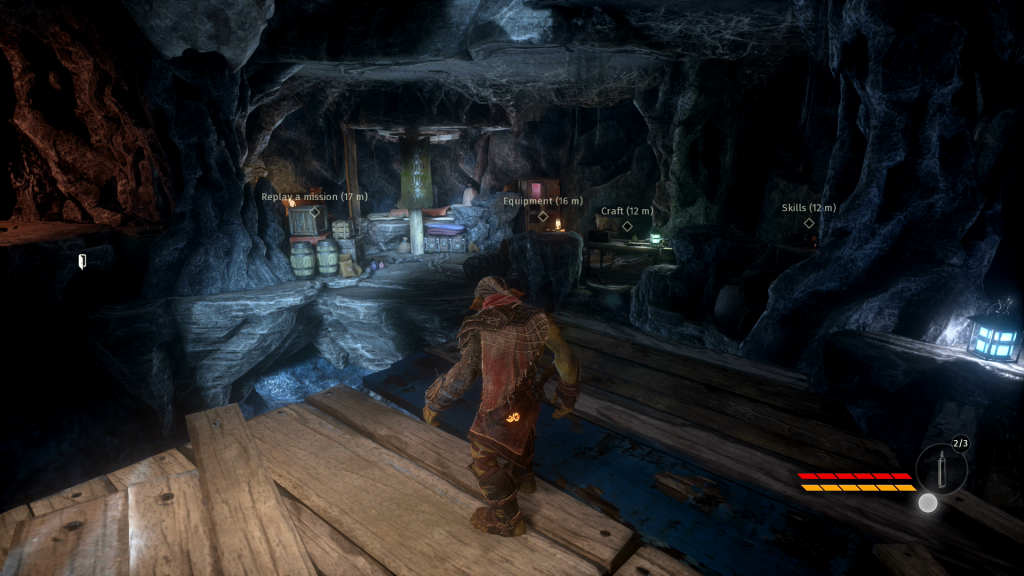 It could be argued that, since this is a stealth game, you shouldn’t ever engage in any form of combat. This was actually true for Master of Shadows, as I think I only really went head-to-head once or twice during my entire playthrough, but with Shards of Darkness it’s never quite as simple as that. The game doesn’t necessarily feel more difficult than its predecessor, but the environment is a little less forgiving with brighter areas and fewer lights that can be extinguished, so you’re never in shadow as much as you’d like. This, in itself, presents problems in certain areas where guile and a mastery of stealth are immediately discounted and a quick kill is the only way forward. If Cyanide could improve upon the combat mechanic, this game, and, in fact, the entire series could probably pick up an additional review star.

When you’re not being forced into unwanted combat, the puzzle-solving aspect of Shards of Darkness is what makes it so damned enjoyable. Your specific goal may only be seventy metres away, and your extraction point – typically an airship or balloon – perhaps another twenty metres from there, but getting there is a question of speculation and examining trends. Going under the floors may get you there quicker, but you’ll be missing out on some collectibles along the way and have to scale a sheer rock face to get to the exit, whereas taking the high ground would make the exit within easier reach but actually getting to high ground in the first place may involve dodging a fair number of guards along the way. In any given level, there will likely be at least four or five possible routes, each with their own risks and obstacles, and some will be more rewarding than others. 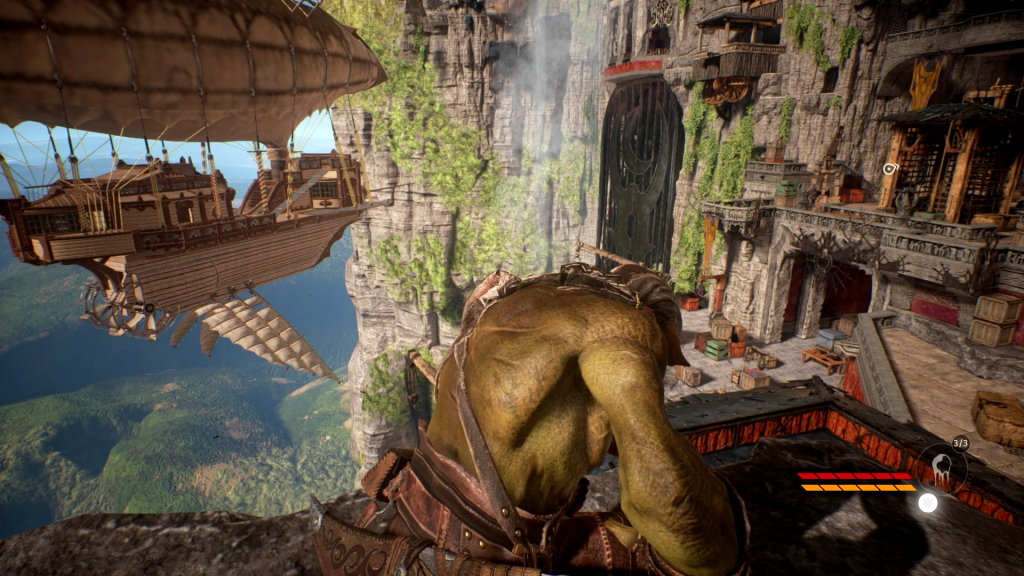 As the game progresses, so too does the difficulty. At first, you had workers and guards to contend with, most of whom were pretty damned stupid and would literally stand with their backs to the darkness for inexplicably long periods of time, and would rarely, if ever, travel in pairs. In later levels, they introduce dwarf guards and roabies – bizarre insect creatures – both of whom can actually smell whenever Styx is close, and hear his movements. This presents an entirely new set of challenges for the player as remaining in the shadows no longer guarantees safety, or cover of any kind. These hyper-sensed enemies need to be dealt with quickly, but it’s never as simple as it sounds.

To make life a little easier, your amber can be used to either vomit up a controllable clone, transport you to another area via a thrown cocoon, or even temporary visibility. These skills are developed as you battle through, collecting XP, and each of the five skill trees – Alchemy, Cloning, Kill, Perception, and Stealth – serve a specific purpose, depending on your play style. Focusing on improving your kills, for example, may make it quicker to get through levels but on those occasions where you are faced with too many enemies at once you could end up wishing that you’d spent your points on mastering invisibility to quickly run past the danger and into a place of safety. One place where Cyanide got it right was when they made the decision to allow players to reconfigure their skill points. While you may not be able to do it mid-level, the fact that you can do it from a skill table or back at your hideout means that you can – and will – learn from your mistakes and become a better player as you progress. 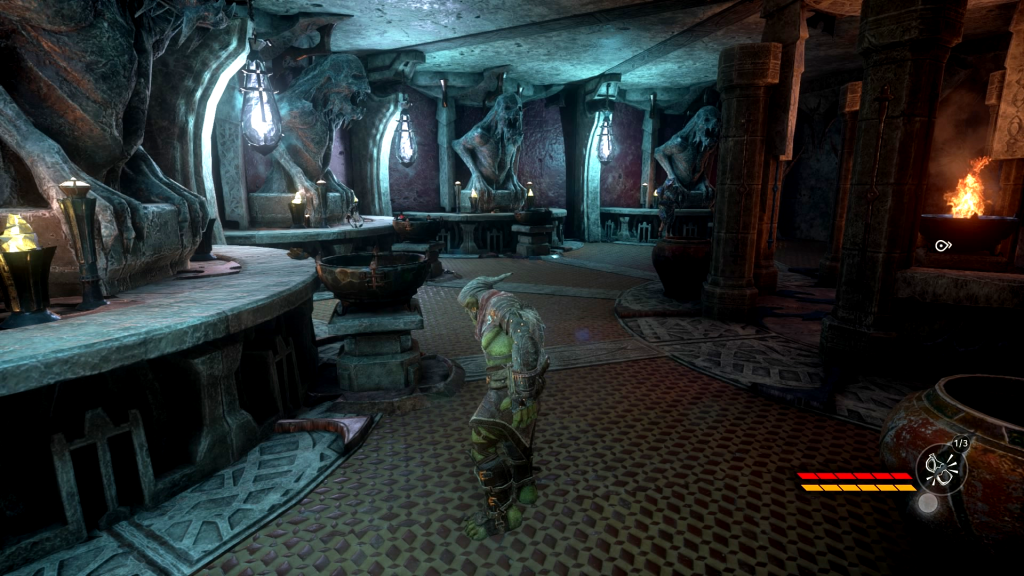 The cynical hatred and snorts of derision from Saul Jephcott’s portrayal of Styx are on top form, as before, but the consistent breaking of the fourth wall within the script can get a little tiresome over time. It was initially quite endearing to be scaling a wall and hear a sarcastic comment about how he can do it without having to wear a white tabard and hoodie, or how he doesn’t need a conveniently placed haystack to land in, and it was genuinely entertaining to be verbally abused by Styx the first time I got him killed, but there’s a line. That line is crossed when the protagonist starts to make sarcastic comments about the intelligence of the developers, putting down their abilities, because the game IS flawed and you start to look stupid when you poke fun at yourself for falling short, because you’re really poking fun at the people who paid full price for a game that you knew had flaws. Or perhaps hanging around Styx has given a boost to my cynicism.

To add a new dimension to gameplay, Cyanide introduce a co-op mode where you can join someone’s game as their clone, or have them become your clone. In theory, this is fine, but it also means that you have twice as many people trying to avoid being caught, and with no in-game chat option it means you’ll be relying on third-party chat software on the PC, or dashboard-based chat on consoles. It’s not something I tried, as stealth and co-op tend not to work well in the same sentence, but I’m sure someone somewhere enjoyed it for a few fleeting moments before their clone caused their premature death. 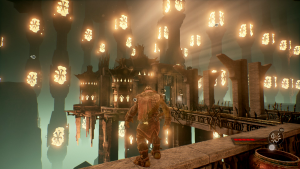 What the Styx series does well is stealth, and Shards of Darkness is no different, carrying on the legacy without issue. It doesn’t feel like a sequel or follow-up, however, but more of an extension of the first game where everything remains as before, with only a change to the storyline and a huge new world to explore. The steampunk visuals can be breathtaking at times, especially the level based entirely on airships, and the environments are perfectly designed for all aspects of stealth and exploration, with more than enough in the way of collectibles and skill development. Avoid combat as much as possible, and you’ve got a solid 15-20 hours of smart puzzle solving ahead of you.

Styx: Shards of Darkness
7 Overall
Pros
+ When you're stealthing, it handles it well + Environments and level design lend themselves well to the premise + Jephcott's voice acting is, once again, top notch + Enough to do for several playthroughs, if you're so inclined + Ability to turn off checkpointing for increased toughness
Cons
- Combat sucks arse, again - With limited resources, getting by earlier areas can be tough - The fourth-wall stuff is a little too much at times
Summary
Styx: Shards of Darkness continues the series with as much enthusiasm as its predecessor, and builds upon what made Master of Shadows work so well - the stealth aspect. The fact that Cyanide Studio didn't pay attention to the negative reports on the combat, and kept the mechanic the same as before is practically the only thing that lets the side down in terms of playability. If you want to have to think about getting from point A to point B, and don't mind getting frustrated at times, then this is easily the best way to spend 15-20 hours.