Back in the day over on the other side, gamers looking for something cheap and experimental could pick up all manner of curios from Xbox Live Indie Games, a real showcase of homemade gaming.  Most of it was trash but there were gems and one of those was MotorHEAT, a game that we rate as one of the best racing games on the system.  It was a traffic-weaving game where you drove ever onwards trying to avoid other cars and get as much distance before the time ran out.

Street Racer Underground follows that formula but, crucially, fails to meet any bar that game set which is disappointing given that MotorHEAT cost about 70p.  It has the same core set up.  You’re on an ever advancing road and you really just move left and right across the five lanes of traffic.  Unlike MotorHEAT, the tracks never change and they never curve, you’re just on what feels like a highway going very straight, through a generic city. 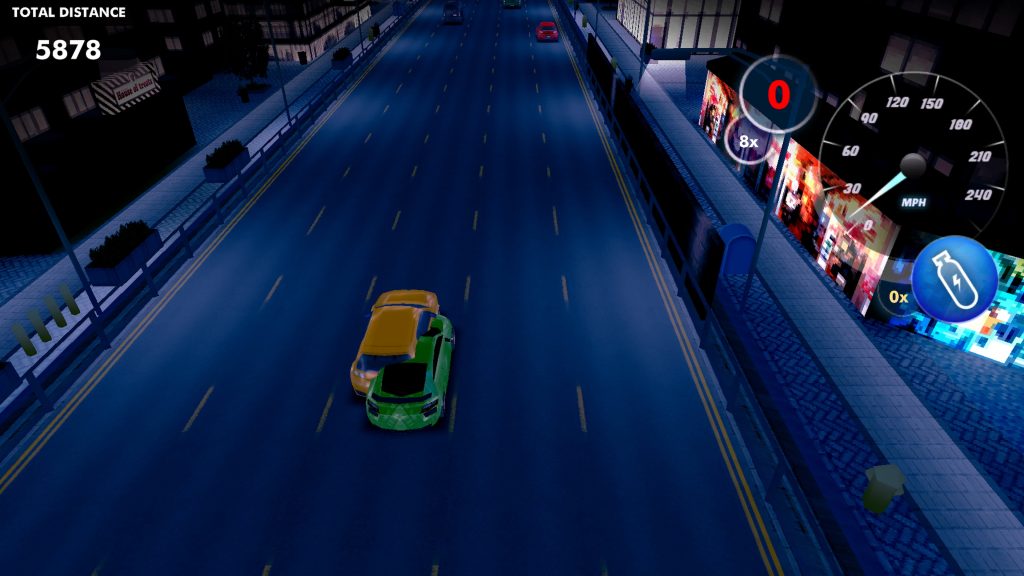 Distance is what you want and time is your enemy.  You start with 35 seconds on the clock and when that runs out, it is game over.  Hitting checkpoints will give you back ten seconds though and you’ll want to do that as frequently as possible.  However, you have no control over speed as such apart from a nitro boost, activated with

.   Nitro is earned by closely dodging other cars, as system MotorHEAT also used, and so the whole game becomes about risk vs. reward.

That’s all fine but the problem is just how weakly this is all executed.  Pretty much everything about the game is ‘off’ in some way or another.  First up are the controls.  They feel imprecise and woolly.  At least at first.  Not what you want from this sort of game at all.  When done well this traffic-dodging style of game comes down to pixels and that’s what you need if you want to be in the ‘zone’ but that doesn’t really happen here. 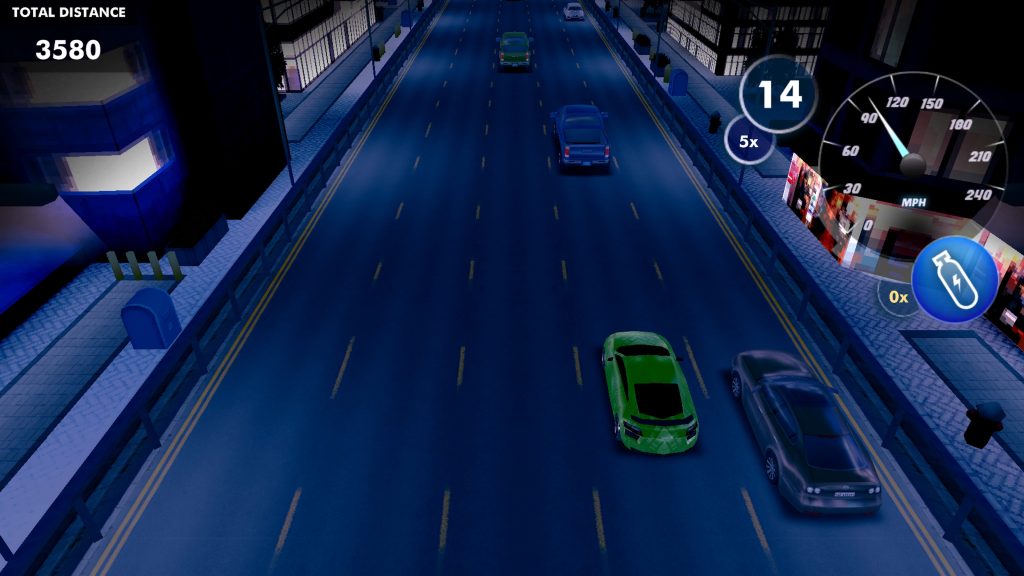 You can get better cars, and upgrade their speed, handling and nitro abilities, but it’s such a grind.  At mid-way through the game, a run might earn you 1500-1750 points but a good car will cost over 50,000.  The car pretty much determines what your distance limit is.  You may have a good run but you’ll still never get much further because your car just won’t be fast enough to hit those checkpoints.  The next car will be a bit better but before long you’ll realise that it’ll be better if you save for the best car so that you get more from each run.  And that’s just a grind.

The game offers no variety at all.  One road flanked on each side by a handful of repeating buildings.  This has all the depth of an early ’80s arcade game.  In fact, games like Spy Hunter at least added extra elements like weapons and new vehicle types but there’s nothing here.  Just the same stretch of road, the same cars, the same action.  The only wrinkle may have come from the fact that the police will chase you if you bump into other cars too often but the trigger for that is so ridiculously lenient that you’ll literally have to stay in one lane for half a minute before the cops show up. 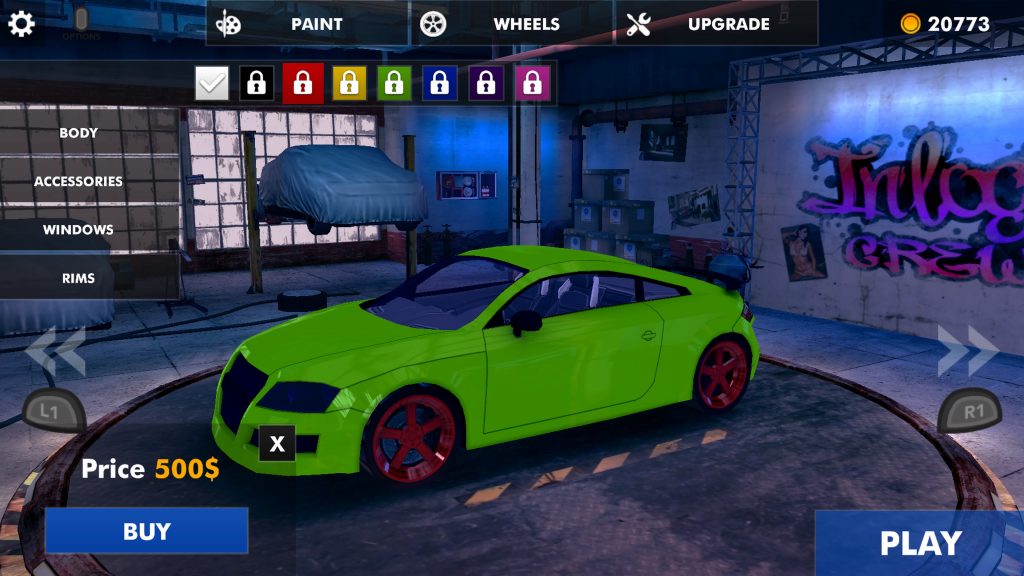 Given the game’s street racing setting, you won’t be surprised to find out that there’s a whole customisation element to the game but again this is so poorly conceived.  You can change your car’s appearance by painting the body, windows, accessories and wheels but only the body colour is noticeable in game.  Accessory colours aren’t even noticeable in the customisation menu.  None of it matters whatsoever.  So, again, it all just becomes about grinding until you can afford that next car.

Aside from the game’s main ‘endless’ mode, there are also four races but these just come down to having a good enough car.  If you don’t, you aren’t winning and no amount of skill is going to change that.  Again, get on that grind if you want to succeed. 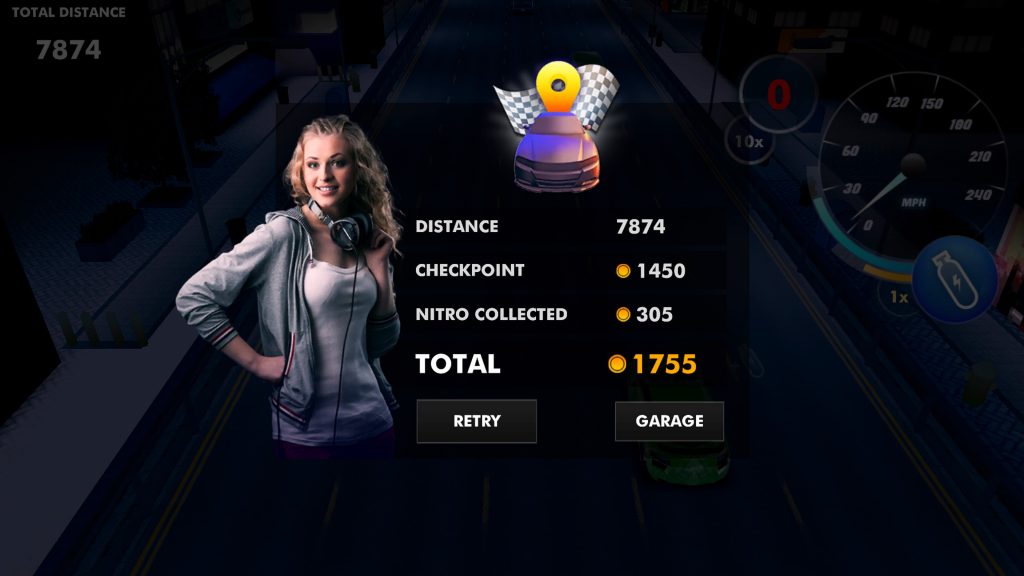 Initially, the screenshots might make you think that this game at least has a nice Need For Speed: Underground aesthetic but even that is poorly implemented.  The only human in the game is a still image of a girl with a headset who could easily be a stock photo for an office co-worker or fitness instructor.  The night time setting, the only setting this game has, should at least give you some nice lighting or something but the light patterns on the cars are completely still.  They are just the textures on the cars.  There’s no reflections or shadows.  It’s so amateurish.  The cars in the garage do at least have some lighting on them but they look like cars from a cheap PS2 game with as much detail as a CGI image from the early 1980s.

There’s just nothing here that is good and given that one of our favourite racing games did this better and cheaper on far weaker hardware, we can’t help but wonder why they even bothered with this.  It’d look average on a mobile phone but on a PS4 it’s just a bit insulting.