Street Outlaws: The List is a show on the Discovery Channel apparently. Not that we’d ever heard of it prior to this game. From what we can gather, never having watched it, it’s a hotrod car modding kinda thing. Sorta like Wheeler Dealers crossed with Duck Dynasty if we had to elevator pitch it. Apparently it has run for fourteen seasons so far. Either way, we’re a little baffled that Street Outlaws: The List is a thing, let alone deemed worthy fodder for game treatment. Though if the aforementioned Duck Dynasty gets a game, why not this.

The game opens up with a tutorial of sorts introducing the controls and two game modes. Firstly there’s a Ken Block-style obstacle race mode where you learn how to brake and accelerate. Revelatory in terms of introducing

to brake, with handbrake mapped to

. Next up the drag race mode is introduced. 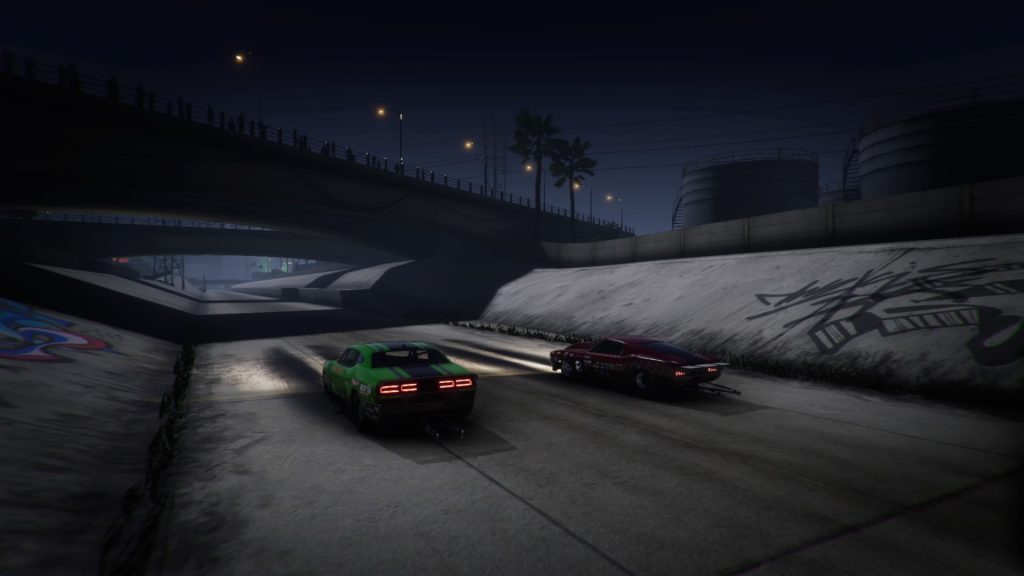 Unlike that found in the likes of Forza for example, it’s not so much a case of timing your acceleration and hoping for the best. Here you have burnouts and bumping your car towards the start line in small increments. Then when it comes to the race itself, you need to keep your car from deviating out of your lane while shifting up gears manually to hit optimal revs. Annoyingly, during the tutorial if you deviate at all, it’s an instant fail. And it makes you do it again. And again. Eventually you’ll nail it and reach the end of the tutorial.

Then your career will begin with you choosing one of three beater cars.  We chose a small hatchback that looked a bit like the AMC Pacer as featured in Wayne’s World. A sweet ride it isn’t, the game acknowledging such. Before you begin to tackle the titular list you need to work your way up through racing tiers one and two, broken down into several short series of five events. 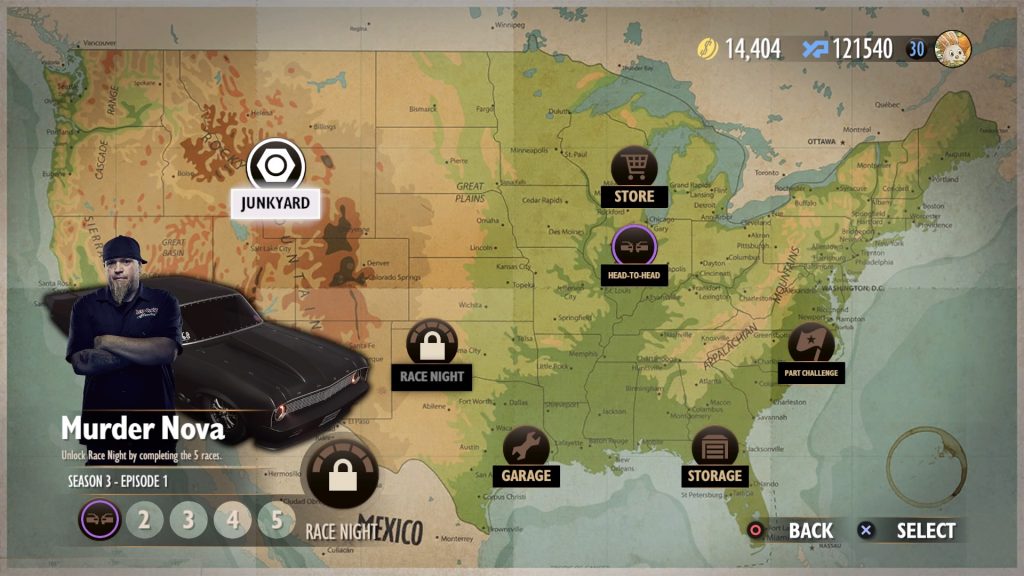 Each set of five events culminates in a race night, always a pair of drag races.  In fact, the focus of the TV show seems to be these drag races. At least the developers realised this would make for a boring game, mixing it up with checkpoint and smash events to name two variants. This along with bullseye events (think Monkey Target with a ton of car) and the frequent drag races makes for reasonable amount of variety.

As you play you’ll level up your driver XP unlocking vehicles to progress your career. Along with experience points (with a level fifty cap) you unlock money to use in the in-game shop and at the junkyard. Once you hit level fifty though, any impetus to get a gold medal in events dissipates when you realise you get a payday regardless of result.

Once you get to the end of season two you’ll unlock the ability to take on the drivers on The List in the race night at the end of each five events. To begin with you’ll probably manage to climb a couple of places but if you end up on a race that takes place on a narrow dragstrip, you could find yourself in hot water. Especially since you only get a single try at a race. If you mess up with a DQ or loss you maintain your position. You’ll either then be called out by the driver you just beat as they try to regain their spot or in the event you lose both events you could find yourself dropping a place. It’s a bit annoying if you think you’re good to go only for your attempt to stall due to one crap race or two. 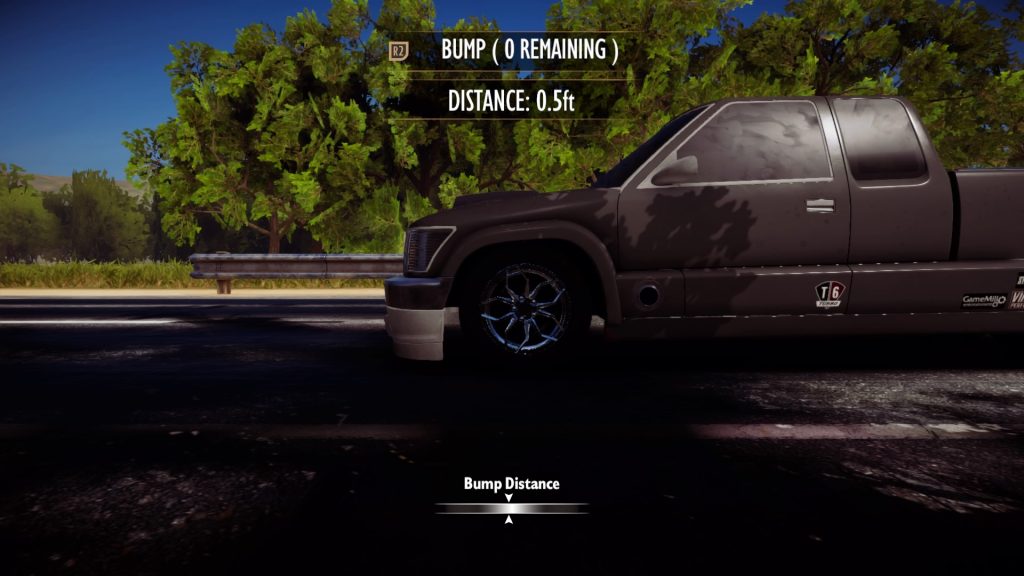 Every drag race sees your car components take a beating, to the extent that your car overall rating and hence performance will be affected. You can go into the garage and upgrade your vehicle with parts from the scrapyard to begin with and eventually from level fifteen onwards in the store.

Parts can be fitted across six categories ranging from drivetrain to electrical. In addition you’ll be able to unlock extra parts from occasional parts challenge races. You’ll hit a plateau on your way to your holy grail of a 4,500+ car rating, ours being just below 4,000 before useful parts in the shop dried up. Even the (annoyingly hard) parts races rarely bear fruit in terms of parts that are any use to you.

Your only avenue for new parts in the post-fifty wastleland is going to be the junkyard assuming you get lucky with the RNG of the parts it sees fit to throw your way. As we were finishing off our review we won one parts event for a fuel tank which was immediately succeeded by a better part from the junkyard. It makes for an occasionally frustrating path, but to be honest, once you get high enough rated parts your junkyard searches will be more focussed. 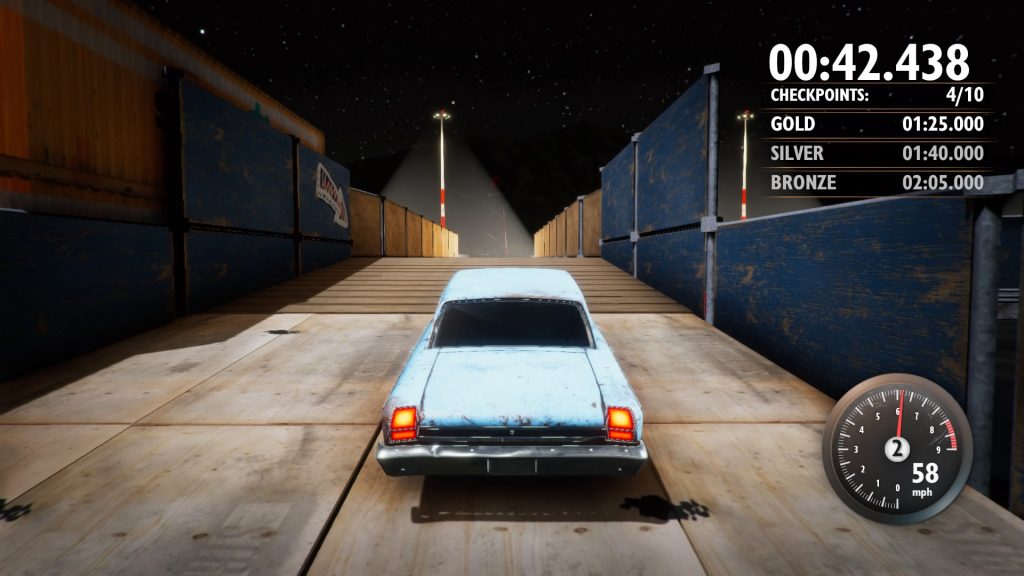 All this toing and froing for parts gives you a fair bit of agency in terms you feeling like your car is yours as opposed to just some automatically upgraded thing. That combined with the cars you unlock during your career progression really add to the sense of ownership. It’s a neat trick in giving your that sense of building a car. You can also change cosmetic paint, tyre and wheel rim unlocks but they don’t have any bearing on overall performance. You can set tuning presets but we found ourselves finding one setting that was a decent catch all for performance and drag race stability to stop lane drift.

The loading screens, of which you’ll see plenty, attempt to make things interesting by giving you factoids about the Street Outlaws themselves. From what we’ve learned, they’re all based around Oklahoma City, giving them a collective nickname of the 405. This being the area code for OKC. Righto. They all have nicknames that generally relate to their cars or in the case of AZN, their ethnicity or background. Though Murder Nova sounds a bit daft, regardless of its origin. 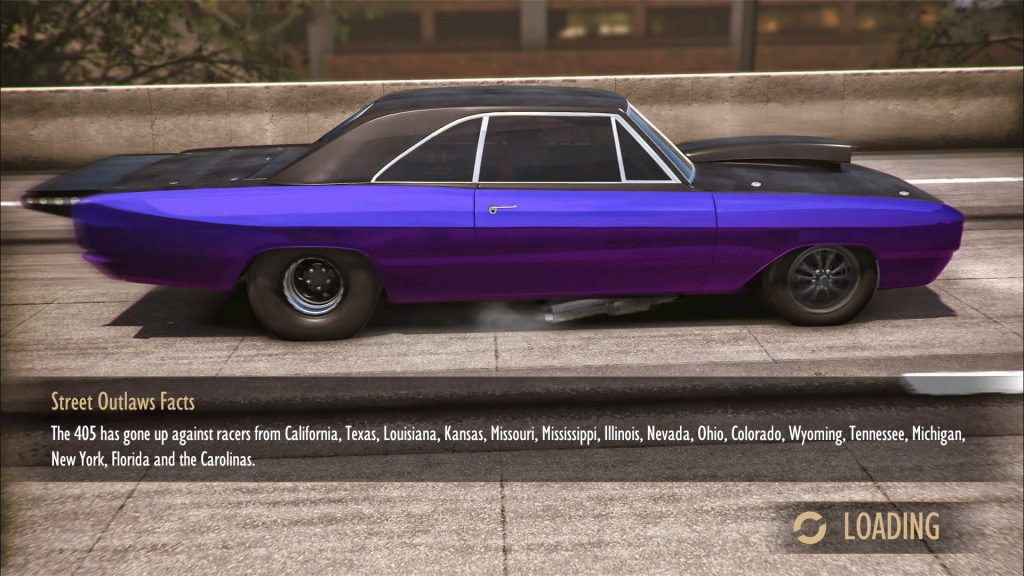 We’ve tried to avoid focussing on it too much but it is hard to avoid the lack of graphical prowess here. Street Outlaws: The List could easily be an early era 360 game, looking similar to Forza Motorsport 2 in terms of fidelity. The tracks being thrown together with what appears to be cargo containers and wooden planks don’t help admittedly, but it all looks very low rent. Daft little usability issues also ensue like the default camera view reverting to close chase view and the car views otherwise being fairly useless.

You can’t set a default setting in the menu to make your preferred view be a preset. Coupled with soundbites from the cast of the TV show that seem to trigger regardless of your proficiency, this seems to be very much a licence by numbers. Having watched videos of the drag races from the actual show, there’s huge entourages of people supporting each racer. This isn’t the case here as there’s not even a flagman starting races. It’s all less to model, but does detract a little from the sense of occasion. 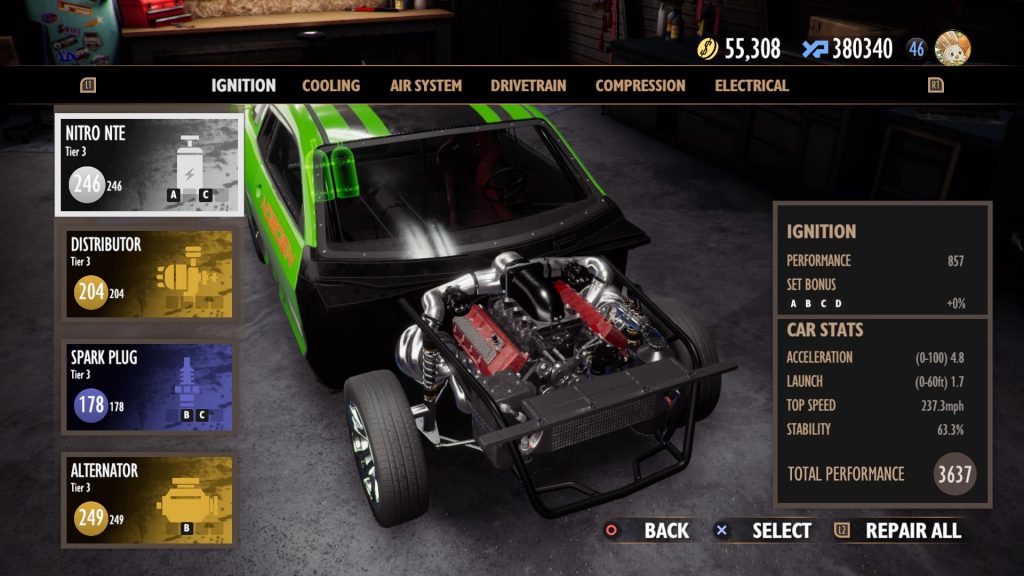 Yet despite these caveats and the other issues we mentioned, we had fun playing Street Outlaws. Drag races which could otherwise be perfunctory events are given added interest with the burnout and bumping subsections. The developers decision to flesh out the game with extra event types was a wise one as this would be a slim package otherwise. The licence feels almost secondary to this other than the drag racing component. The voice samples are overused and feel misplaced on occasion, thrown in to differentiate this from any other game.

In conclusion, Street Outlaws: The List is greater than the sum of its parts. On the face of it, this game is a throwback to TV show licences done on the cheap. Yet it’s somehow fun despite its obvious flaws. It might leave fans of the show a little cold, but for anyone else this is a reasonable driving game with a few annoying issues.

Summary
Street Outlaws: The List is greater than the sum of its parts. On the face of it, this game is a throwback to TV show licences done on the cheap. Yet it's somehow fun despite its obvious flaws.