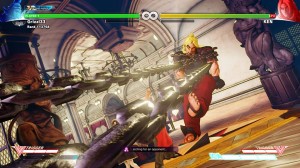 If I could liken the Street Fighter franchise to any fairy tale prop I would compare it directly to the poison apple. On the surface you have the juicy succulence of superb generational leaps in graphics, a memorable roster of larger than life characters and the best and most fluent gameplay in the genre. Yet when you take that bite and really sink in you can’t help but feel the developing taste of shrewd business tactics, yearly editions and overall bad habits. As with all poisons there will be those that are immune to its toxicity with those at the higher end of the competitive brackets shoving the bad out of the way in favour of their next meal ticket while the lower and mid end will feel the potency ten fold. Street Fighter V at launch  has that poison dripping out of its pores without any kind of subtlety.

The gameplay in Street Fighter V has been tailored specifically for that desirable middle ground. This is that soft patch of land which is the point between the casual players and the elite professionals that fill our streams with tournaments throughout the year. Gone are the focus attacks of Street Fighter IV and in is the new ‘V’ Skill and trigger system. Basically whenever you hit medium kick and punch buttons together you pull off a V Skill which is unique to the character you are controlling. Returning character Nash plucks fireballs out of the air, stealing the energy for his own special moves, Ryu gets a SFIII style parry and Chun Li shoots up into the air for some airborne combo setups as an example. V Triggers buff their characters or result in a near instantaneous move. Newcomer Rashid for example can conjure up a whirlwind to help juggle his opponents and make for some satisfying mixups. V Skills and Triggers are easy to pull off and are just plain fun to experiment with and offer a fantastic amount of usability, Nash’s V trigger is particularly handy if you find yourself looking down the hand barrel of a Metsu Hadoken. Rather than taking it in the face he can teleport behind Ryu and stay in the fight. 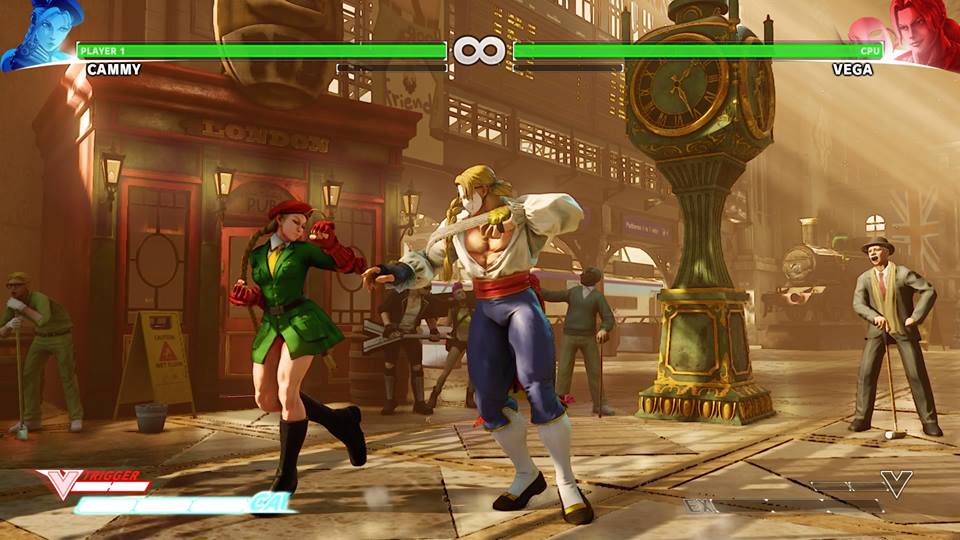 The graphics and overall out of menu presentation is fantastic also and exactly what you come to expect from a new Street Fighter. In particular one of the finest aspects about the game is how the animations react and feel so much more organic than previous games. Take Ryu’s standard uppercut for example. If an opponent is jumping in then Ryu will extend his arm fully as you would expect so that he can make the connection, however if the opponent is on the ground next to him the animation shifts to reflect this to apply more of an impact. Also if the uppercut whiffs or is blocked then the animations react accordingly with either a pained hyper extension or a crumpled arm. It’s brilliant and really helps players get a read of what is going on without adding confusion to the screen.

Upon loading up the latest in Capcom’s finest you will be met with a bevy of options, most of which aren’t available for the time being and problem one for a full priced game at launch. The modes that do work are incredibly bare bones. For single player you have your standard training mode which is just the standard training which sees you punching a pixel meat bag to improve your abilities. None of the challenges or trials from Street Fighter IV are present here currently and will be available when the next content drop arrives in March. If you prefer a bit more meat to your single player experience then you can also try story mode which if it wasn’t for the DLC earning Fight Money gains then you would be forgiven for completely ignoring it. The story mode consists of incredibly bite sized snippets of gameplay interspersed with single frame storyboards for each character. The art is neat and what you would come to expect from the usual single frame endings of Street Fighter II but when you get to the actual meat of the game within these stories then seasoned players will be annoyed to find that each fight is one round, on easy mode with full special meters on at default, which is to say that these are over very quickly. Also when I say snippets, I mean that for each character you have between two and four fights in an entire story. You can grind these out within ten minutes each, less if you skip the storyboards.

You can always go into survival mode and grind out some extra character colours, titles or victory quotes, but that is you lot for single player. That is correct, no Arcade mode, No world tour, no trials or character building fun. New generation Street Fighter games aren’t exactly known for large amounts of content or modes but to expect players to be happy with bitty scraps when people have been expecting a meal then this treatment is nothing short of ludicrous. 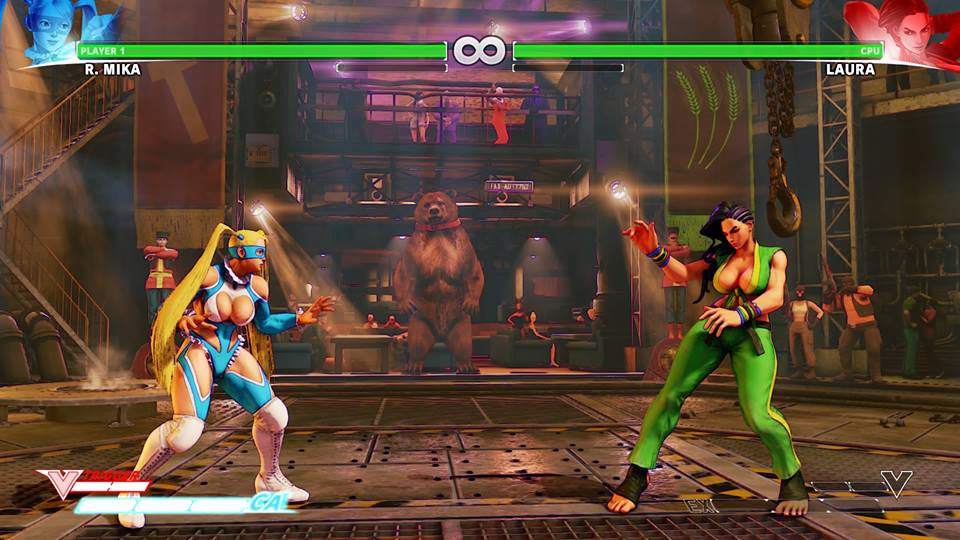 The main helping in this package is the online play, for most this will certainly be the attraction and what they sign up for and I can with confidence say that this is one of the best Street Fighter experiences I have enjoyed. The mechanics are tight, the character diversity, especially at this early stage is a pleasant surprise and new stars in the fighting game community are starting to form. But let us hit the breaks one more time as at launch the servers haven’t been the most stable. For the first couple of days it was almost impossible to find a match without experiencing disconnects, lag spikes or incredibly long match loading times. Things have started to work themselves out but my biggest bug bear being those long match loading times which appear to be an inherent issue for PS4 owners. Currently it takes around two minutes from the moment you receive a fight invite to when you actually are able to start fighting. Now this may not sound too bad, but this two minute black screen happens whenever you try to load anything at all. So that is when loading a match, exiting a match, going back to single player, getting an invite again etc. It adds up, and you will spend a larger amount of time watching a black screen that you will be actually playing the game.

In terms of convenience Street Fighter V is one of the most ill thought out that I have seen in the fighting game genre. Remember when you could switch characters just before entering a ranked or player match in Street Fighter IV, Street Fighter III or any other fighting game? You can’t do this here. To change your character you have to pick your favourite in the main menu and this is the character you fight with. If you want to change you have to go back to the main menu, sit through the loading screens again, change the character and hope that another invite hasn’t popped up while you do this. The worst part about this is that this feature was supposedly designed to make the matchmaking process faster. But when matches take two minutes to load and get into then this is completely and utterly wasted as a feature. Battle Lounges are another pet hate, On the very box for the game it even states that the game allows two to eight players. Battle Lounges are the lobby system in which you should be able to have eight players together, spectating fights while waiting for a winner stays on match or two, but of course this is not due until March. 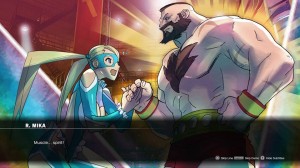 Yes there is a lot of content coming in March and beyond, but one of the positive aspects of this would be the character downloads. It was always going to be expected that new characters and stages were coming with updates, but as opposed to releasing Super or Ultra editions as previous Capcom have decided to trickle feed these new additions to the roster every couple of months. The biggest benefit to this is that characters can be unlocked through playing the game as easily as they can be unlocked immediately by purchasing them directly in the store. Each won round results in a currency known as Fight Money, 100,000fm gives you a character and if you play through the story mode then you will earn enough straight away for one character and some extras for when they drop in March. Players may bemoan the fact that the current roster in the game is relatively light at sixteen choices, but genuinely the stock roster covers most playstyles and scales down on copycat characters. Even Ryu and Ken feel quite different from eachother.

Things will improve of course and the score below represents the state of the game at launch and up until the first content updates. You may very well want to add a few points when that happens but right now Street Fighter V’s launch is a tarnish on an otherwise almost flawless franchise and our score will stick as reminder of this.

Street Fighter V
6 Overall
Pros
+ Potentially the best fighting game mechanics ever made for the genre + Excellent, clear and fun graphics and animations. + Potentially the most balanced roster at launch. Each character covers a play style well. + The new V skills and triggers are fun to experiment with and adds some much needed accessability.
Cons
- The pace breaking load times. There should not be more loading than gameplay in a fighting game, or any game for that matter. This isn't the bloody Spectrum. - Lack of single player options and the ones that are provided are piss poor in volume. - Battle lounges should be eight player lobbies but only can support two at launch.
Summary
This review may seem overly negative but I would like to stress that Street Fighter V is definitely a good game. The gameplay is fantastic, the graphics are some of the nicest and cleanest we have yet to see in the fighting game genre to date. But the wrapping around the core is an ill thought out, contrived mess of business tactics and sloppy design. Capcom consistently request that fans wait for updates for when the game will improve but that does not hide the fact that this game was not ready and should not have been released without an early access warning printed on the cover. The people who don't care about these issues would have purchased the game already, If you are sat there on the fence then just save your money and wait until they fix it.