Say the words visual novel to me and I have a pretty good idea of what to expect. Just through osmosis, I’ve gained a perception of a genre that has a rather uneasy underbelly to it. Strawberry Vinegar manages to punch this home every step of the way. Coming from prolific developer Ebi-Hime, this story of friendship doesn’t do much to branch away from the genre’s reputation. 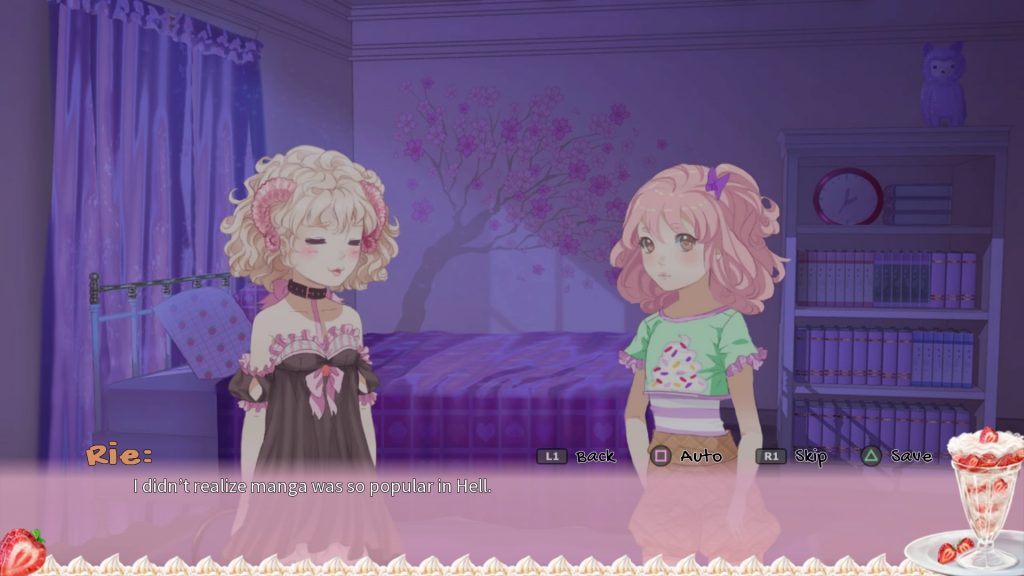 Strawberry Vinegar is a story about two children. Rie is an only child visited by a demon child named Licia who wants to reap her soul. In the interest of fairness, she gives Rie a week to convince her otherwise. Despite this ultimatum, there’s no real sense of danger as the two forge friendship that is, for the most part, wholesome.

The rest of the cast is small with Rie’s parents making up the numbers. Her father is effectively a house-husband. He bakes, cooks and makes dresses for the girls and spends most of his time in the kitchen. The mother is a working actress who still manages to make her presence felt. The family unit does help deliver a nice slice of life and offers the writing some other perspectives.

There are times when Strawberry Vinegar raises a smile. There’s a decent dollop of humour, mostly from Licia’s fish-out-of-water antics. When the themes of friendship get brought up, it’s done in a fairly mature enough manner. I can’t help shake the fact that these two children don’t really talk like children, though. Rie’s dialogue loves to reference how mature she thinks she is. You can probably tell where that’s leading. 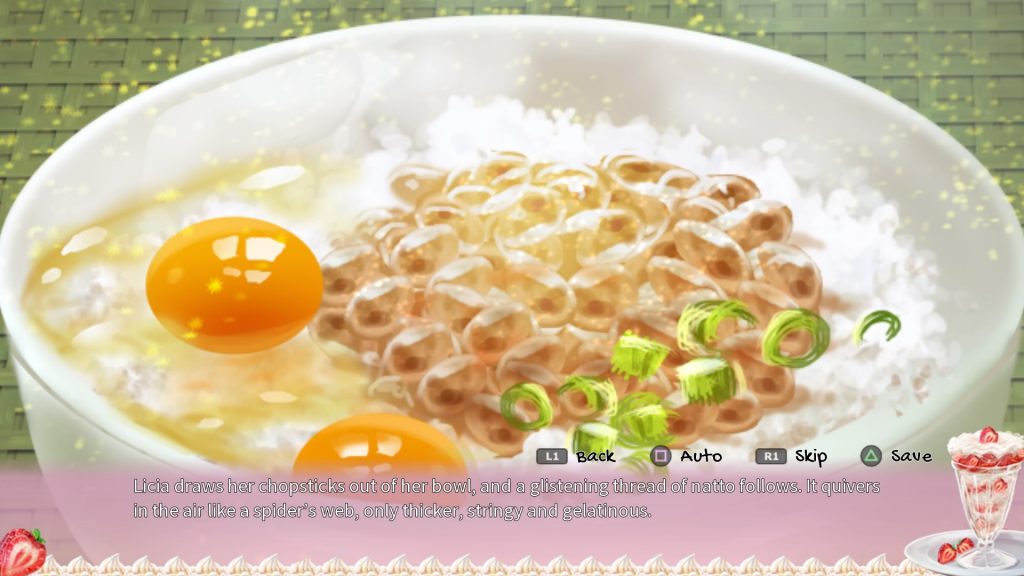 I can’t really talk about Strawberry Vinegar without talking about the more questionable aspects. Eventually, Rie and Licia’s relationship can turn from friendship to romance. Licia starts professing her love from Rie and, whilst you can bat her off, that leads to one of the game’s bad endings. The authorial intent behind two 9 year-old children talking about love cannot be understated. It makes me uncomfortable. Even with the post-credit endings implying that nothing goes far until they’re of age, I cannot endorse this.

There’s other red flags. When there’s scenes at school, the classmates all talk about our leading ladies in terms of attractiveness. I was 9 once. All I wanted out of life was football with my mates and a Mega Drive. Romance and love never came into it. Rie’s parents are sometimes used as a way to bring the discussion round to love. Their marriage gets discussed and how they got together. 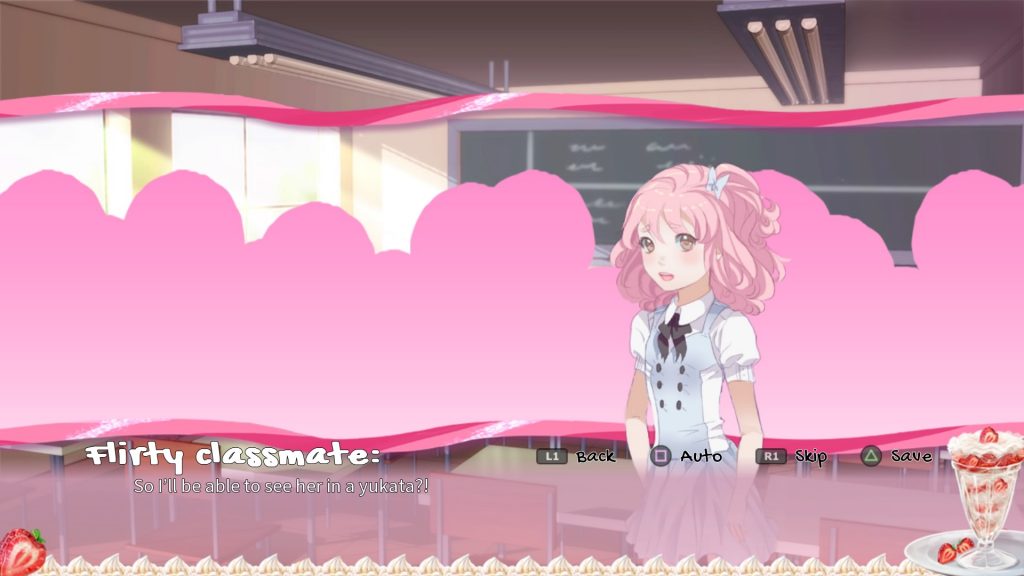 If the kids were much older, I wouldn’t see this as a problem. If ending the friendship or remaining friends wasn’t seen as such a failstate, I’d feel better. As a story about two children, this is insidious. Visually, Strawberry Vinegar takes on a sickly sweet palette. There’s an awful lot of pink on display. The cast’s costumes are mostly frilly, extravagant and very anime. It sticks firmly with genre tropes and there’s a real, almost fetishised look at food. Every meal is given an admittedly detailed pouring over. The writing really gets descriptive when talking about food and Licia loves to eat almost obsessively.

The choices you’re given don’t quite hold the weight they could. I find a fair amount of them merely dictate what you’re going to eat next. When you do get to dictate Licia and Rie’s relationship, it’s not especially subtle. The scenery’s not especially varied with home and school scenes often repeated. Granted, there’s less than a week to play with and kids’ routines are largely set in stone. I want more interactivity in these types of games and, without it, the medium starts to feel it’s not being used to the fullest potential. 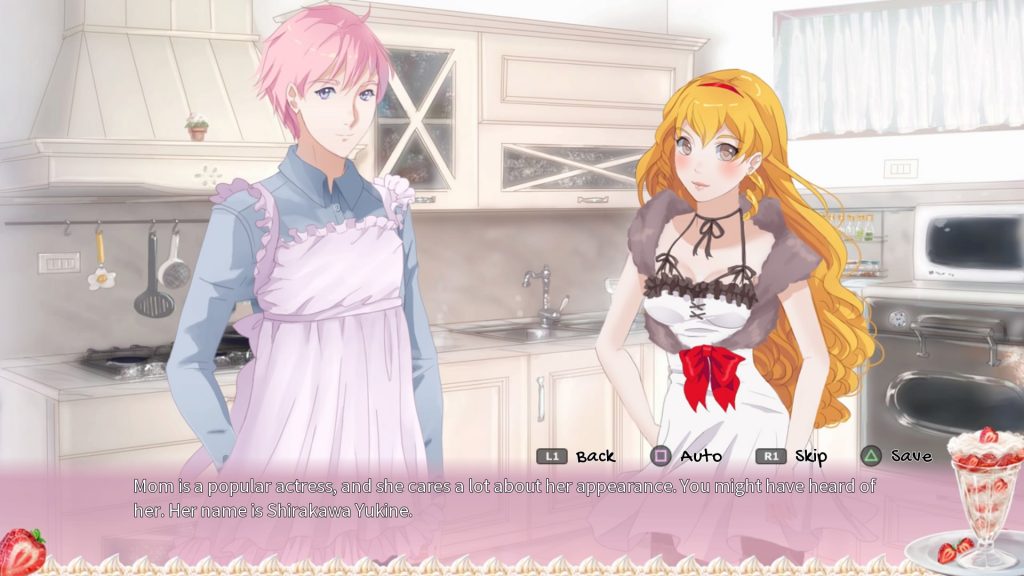 The music retains the game’s twee aesthetic and, whilst the white text is occasionally had to read, the game hammers home a sweet combination of jaunty music and cutesy visuals. Unfortunately, it makes the more objectionable aspects more sketchy. Having read the author’s notes and read interviews by her, it seems she likes to really lay the cuteness on thick. Mission accomplished, I guess.

You know, I knew what to expect from Strawberry Vinegar. I don’t play a lot of visual novels but word and reputation tends to travel. It is a prolific genre with Ebi-Hime herself already well into double-figures. A lot of them seem to cover relationships with supernatural elements, stuck firmly with anime trappings. The wholesome, slice of life elements feel completely ripped apart by the implications that leave a very sour taste.

Strawberry Vinegar
4 Overall
Pros
+ Really lays the cutesy anime style on thick, if that's your thing.
+ Writing is occasionally funny.
+ Manages to portray a blossoming friendship with relative success.
Cons
- White text on a pink background is hard to read.
- The endings have some sketchy, uncomfortable implications.
- The author notes imply a rushed narrative and it shows.
- Very stereotypical of the genre.
Summary
At times, Strawberry Vinegar handles friendship between two children well. There's moments of humour and some good character building on offer. The aesthetics are sickly sweet, twee and a little too much for me. Unfortunately, the good work is undone by some rather awkward, awkward implications. This game takes a rather inevitable turn which I really wish it had the nerve to avoid.