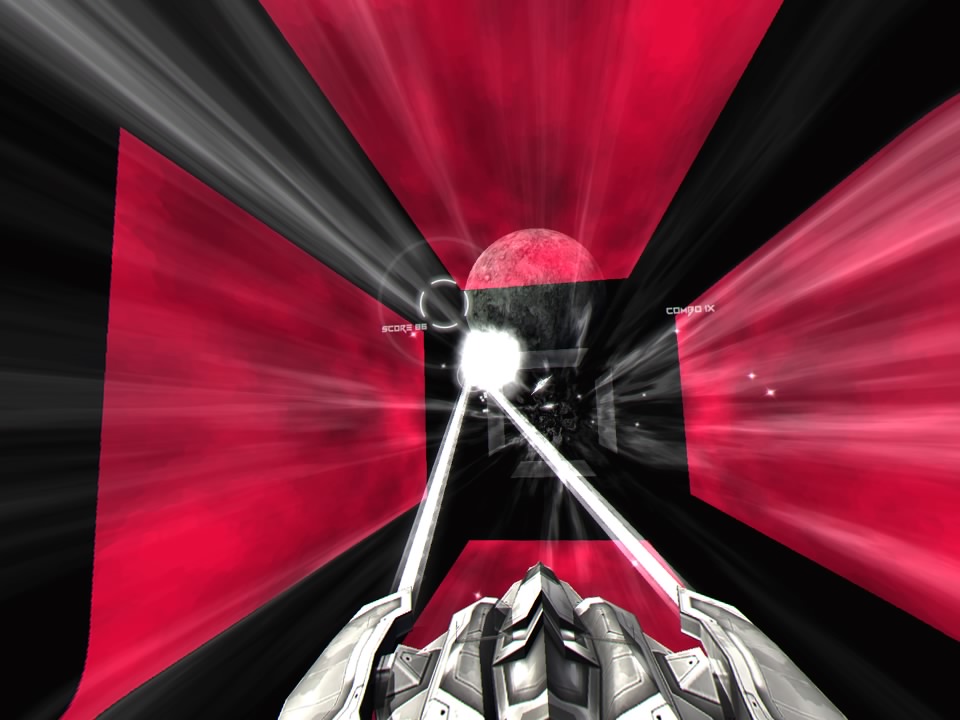 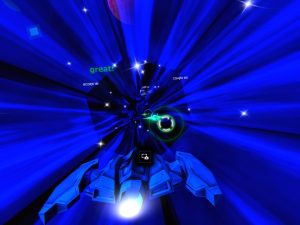 Starship Disco is a rhythm action title from Richard Stenson of one-man development studio Solus Games and it is, in many ways, a very typical PSVR game.  Behind the simple hit the fire button on time gameplay, what you get here is an into-the-screen VR title that sees you destroying enemy starships based mainly on the timing of the beat and their position on the screen.

The game offers three control styles and is initially a little tricky to get going with.  The first control method sees you aiming with your headset and pressing X on your Dualshock 4.  This works quite well at first and feels intuitive but as soon as the patterns get a bit more complicated, it can be hard to keep up and that happens within a minute of the first track.  You can also aim using a Move controller and, if you’re feeling extremely pro, there is an option for using two Move controllers but this increases the difficulty immensely.  For me, the best control set up is the one Move controller set up.  At this point the game plays like a mix of rhythm action and light gun shooter.  But either of the first two set ups are viable.

The game offers you a set list of ten or so songs and you have to beat one to unlock the next.  While the songs vary a little, it’s mostly a funk sort of soundtrack and that works just fine.  However, each song essentially plays out the same.  They are broken into short sections and in each section you’ll see a wave of enemies coming at you.  The waves are similar between songs.  Enemy types always follow the same behaviour.  Orange enemies always bounce into view, yellow ones always fly into the screen rather than at you.  But regardless of the enemy, you always have to wait until they hit a point a certain distance from you and then hit the fire button to shoot them.  You can either follow their flight path or look for the indicators that show where they’ll be.  One criticism is that I was never quite sure which was best to watch.  Sometimes the action didn’t follow the song in a logical way and I’d need to watch the ships but in other songs, or even sections, I’d need to watch the indicators. 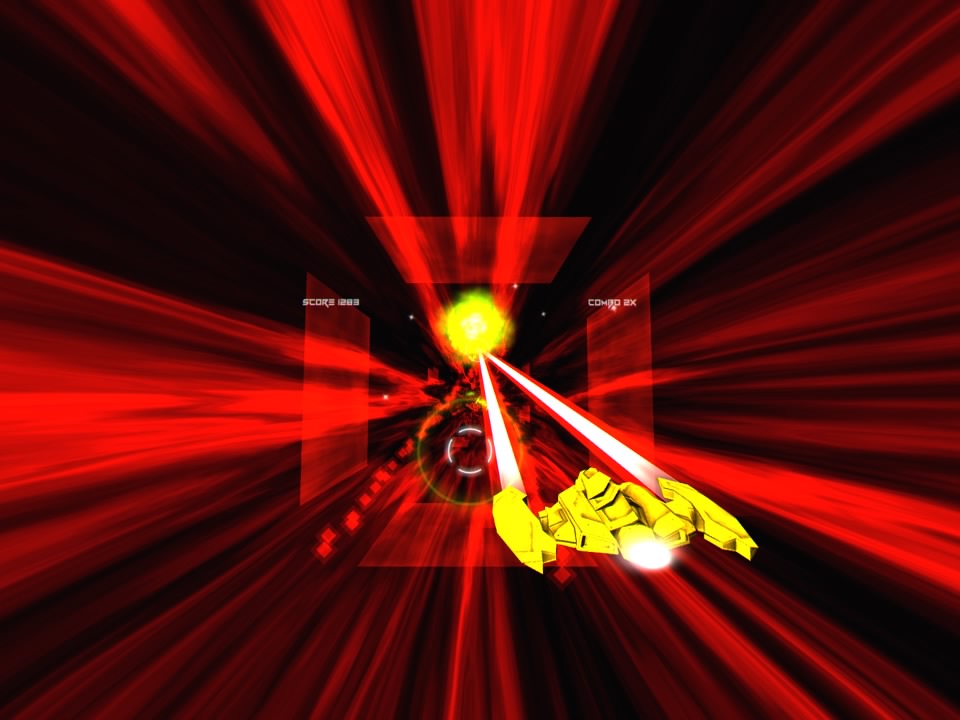 Also, the set list doesn’t build in difficulty.  Song number two was by far the hardest one to get past and many of the songs after were easy to clear in one go but the game was never difficult.  Oddly, the difficulty options just give you more lives but don’t make the patterns any easier to read.  It would have been nice to have a more chilled out option especially given the summery nature of some of the songs on offer.

However, the gameplay itself is enjoyable.  When the song is good (and some of them are) and the patterns follow nicely, this ends up being the most head-nodding game of all time.  Sweeping through a song perfectly feels very satisfying and combined with the VR visuals, Starship Disco delivers.  Occasionally the pattern isn’t great, there are a couple of songs that have sections where I couldn’t really catch the rhythm.  I could catch the rhythm of the song itself but the game’s interpretation of the beat was maybe a little off for me.  It would sometimes focus on a quiet synth track when there is a much more dominant beat or bassline to follow. 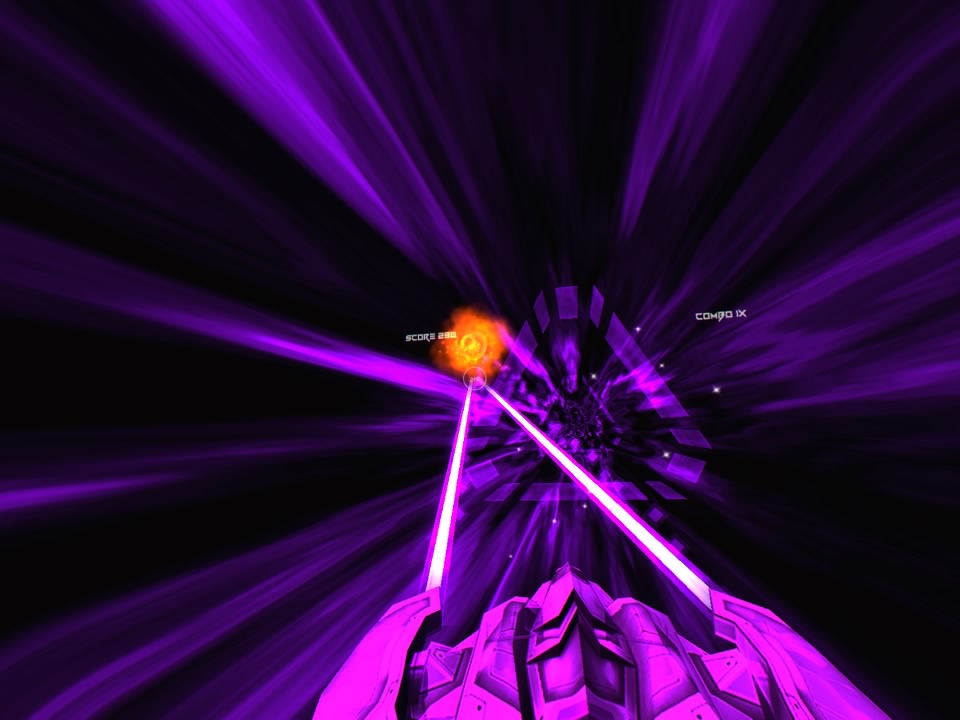 The look of the game certainly appealed to me.  Each level is mostly the same (albeit with a different dominant colour) and sees you flying through a sort of nebula-like space dust while enemies that look straight out of a 1980s 3D Tomytronic unit while various planets fly by in the background.  It’s nothing special but PSVR brings it to life.  It is oddly out of whack with the bright and breezy soundtrack and a few other looks would have been nice (think how Rez switched things up for level five) but as a package, the whole thing works. 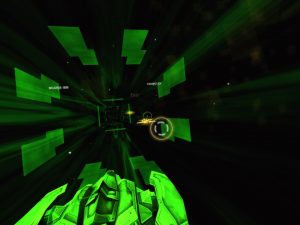 Solus Games have wisely given players the option to import their own music, adding some value to the overall package and that’s a good thing as the trophy set in the game is easily earned in one session and there probably won’t be much leaderboard action happening on the game given how quiet its release has been but, taken as a budget game, Starship Disco is a decent offering and one that shows potential for an expanded sequel.

Starship Disco
7 Overall
Pros
+ Good rhythm action gameplay + Pretty good soundtrack + Nice use of VR + Can upload own tracks + Good choice of control methods
Cons
- Is a bit short lived - VR doesn't affect the gameplay (and is mandatory) - No gameplay variation between songs - Occasionally the patterns aren't great
Summary
Starship Disco is a no-thrills rhythm action shooter that benefits from PSVR and the use of a Move controller. While it is short lived and lacks variation, the game offers some immersive, toe-tapping action at a budget price. We like it a lot and will be crossing our fingers hoping for a more fleshed out sequel one day.