Back in 2002, Jedi Outcast, stood out as being one of the few truly good Star Wars games and with the franchise currently faltering in the hands of EA, we were as pleased as we were surprised to see the game was getting a current-gen remastering.  Being one of the few PC games that I bothered to complete more than once, I was particularly thrilled to have another go at it and this was all despite the fact that I can take or leave Star Wars generally.

The game is set eight years after Return of the Jedi and features Kyle Katarn, a former Jedi who has given up his Force powers after nearly succumbing to the Dark Side.  He starts the game working as a mercenary with his partner, Jan Orr, and for several hours, the game is initially just a first-person shooter set in and around a lot of Star Wars flavoured assets as you battle your way through rooms and corridors filled with Stormtroopers and Imperial Officers. 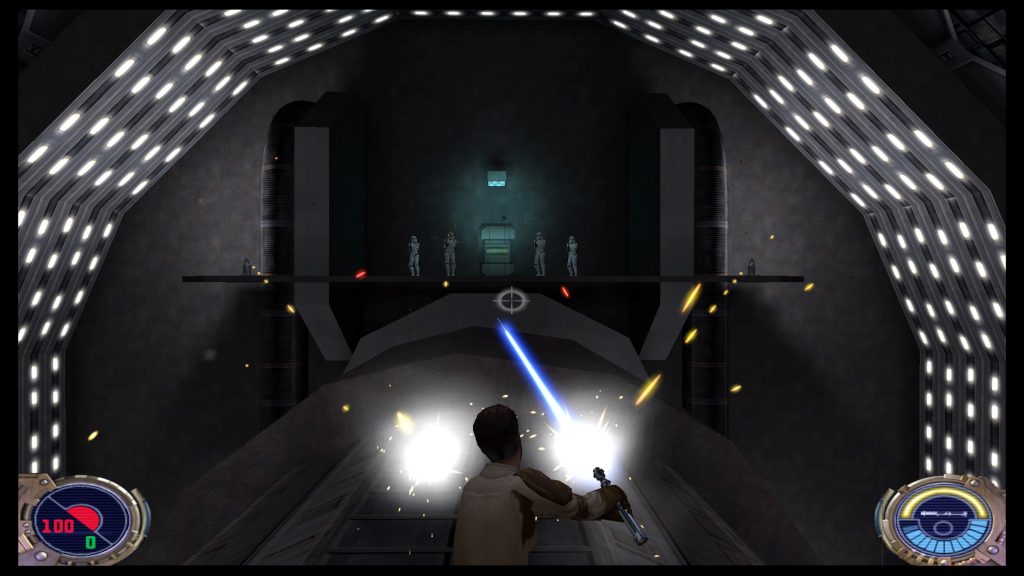 In terms of the combat at this point it is standard first-person shooter fare.  The first blaster you get is mostly awful, requiring the alternative mode charging shot to really do any damage and so at first you feel a bit under-equipped, especially when the Imperial forces seem to be able to kill you pretty easily and despite offering a very early checkpoint, those restart points end up being very very rare, surprising you at how much progress you generally lose when you die.

All that means that your first few minutes with Jedi Outcast are miserable.  I eventually restarted, dropping the difficulty and going again.  I also began to use the game’s quicksave system to back up my progress every few rooms.  But that’s only the start of your pain.  Aside from the clunky controls which aren’t optimised at all for consoles, something that is especially apparent with the lack of a crouch toggle, the game’s other glaring fault soon becomes apparent: the level design. 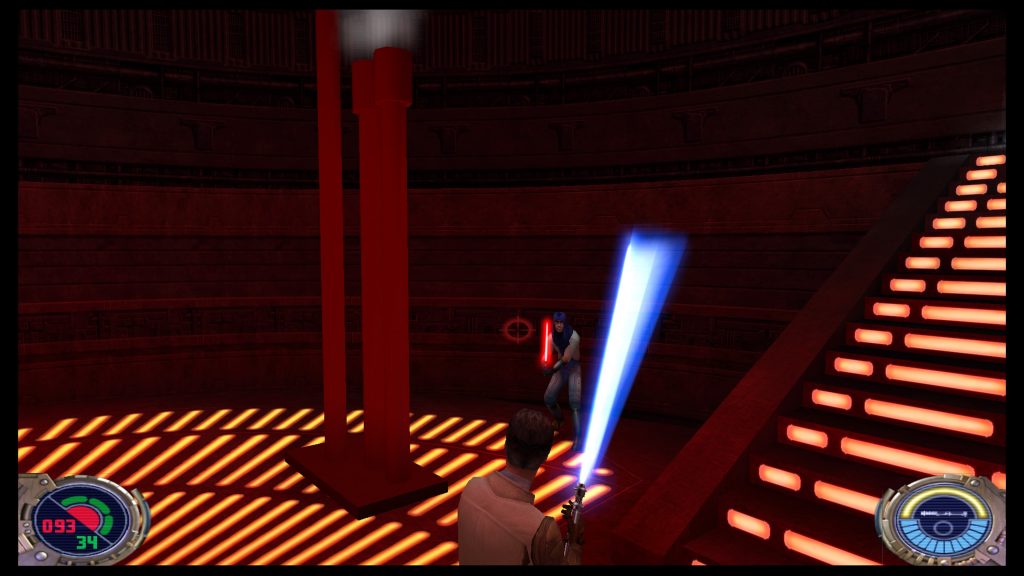 Now in 2002 the level design of this game was dire but in 2019 it’s arguably some of the most aggressively hostile level design of all time.  Invariably you are always looking for a way out of wherever you are.  If you’re lucky, it’s just a door.  If you’re less lucky, the door will be locked and you’ll need to find a switch to open it or a key from an enemy.  But most of the time you’re looking for something that is stupidly hidden.  A grate up in a ceiling that you can destroy, a lift that is disguised brilliantly as a floor panel or a way out high up somewhere that only be reached by climbing up some bit of scenery that you’d never think of trying to scale.  It’s nearly always horrible.

We really cannot state enough just how bad it is and with none of the modern conveniences of having a mini-map or a way-marker, finding your way around Jedi Outcast is truly joyless.  Even several hours in, it still finds ways of surprising you with examples of dreadful level design.  If you’ve never played the original or have forgotten most of it, you will be reaching out for a walkthrough.  It’s inescapable.  If you want this game to last 15 hours, do that.  If you want it to last weeks, go it alone.  But expect misery. 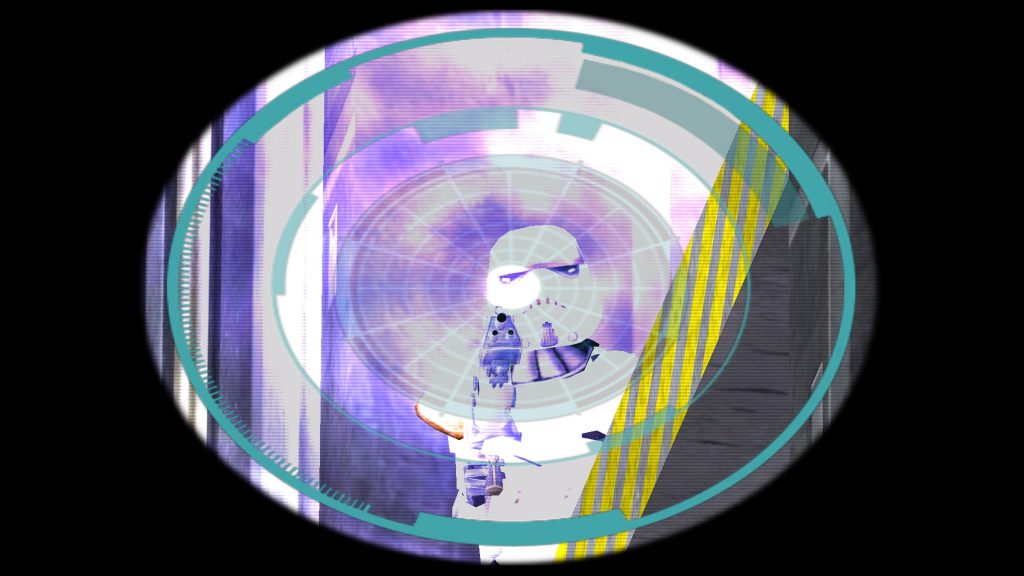 Throw in the upscaled but still primitive visuals, the incredibly fiddly and ugly menu systems and the rubbish save system that doesn’t let you delete saves in-game (and occasionally bugs out like the Switch version also does) and you’d be forgiven for expecting this review to be a mauling but here’s the thing: Jedi Outcast is good.  How can that be?  Well, most importantly, eventually Kyle gets himself a lightsaber and starts re-learning his Force abilities.  This changes the game for the better in a profound way.

With the gunplay now optional, you can run around in third-person deflecting enemy fire with your lightsaber while jumping and flipping all over the place.  Force powers can be used to grant you speed and healing or you can tap into Katarn’s darker abilities and do a Darth Vader throat grip or fire out purple lightning.  As ever ‘force push’ and ‘force pull’ remain the most fun, allowing you to throw enemies to their doom or pulling in whole squads of Stormtroopers so that you can shove your lightsaber into their faces without resistance.   And, of course, the old trick of force gripping someone and holding them paralysed in the air while you throw your lightsaber through them is something that never gets old. 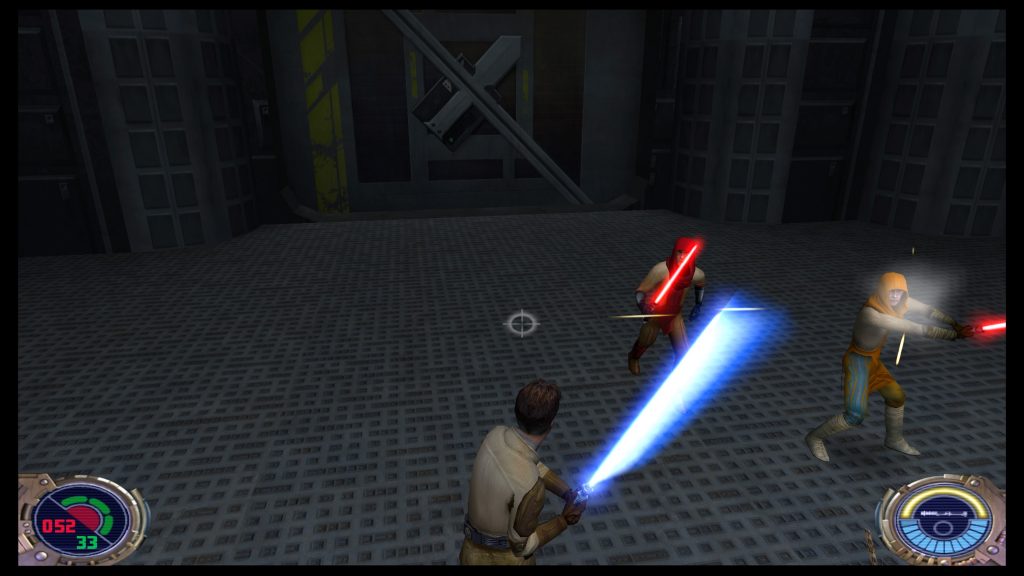 Occasionally you’ll face up against Remnants, experimental enemies who have access to Force powers and this is where you get into the lightsaber battles that made this game famous.  It can all feel a bit button mashy and random but it is also great fun and ultra-satisfying to finally dispatch your foe.

The gameplay really opens up when you get your powers but it also makes the gun stuff better too because now you can play tactically, sniping enemies from afar when you need to and switching up to explosive weapons when the lightsaber approach doesn’t fit the situation.     You’ll unlock a whole arsenal of weapons along the way, each offering differing levels of power, fire rates and accuracy while also giving you a choice of normal and alternative firing modes, giving you plenty of tactical options. 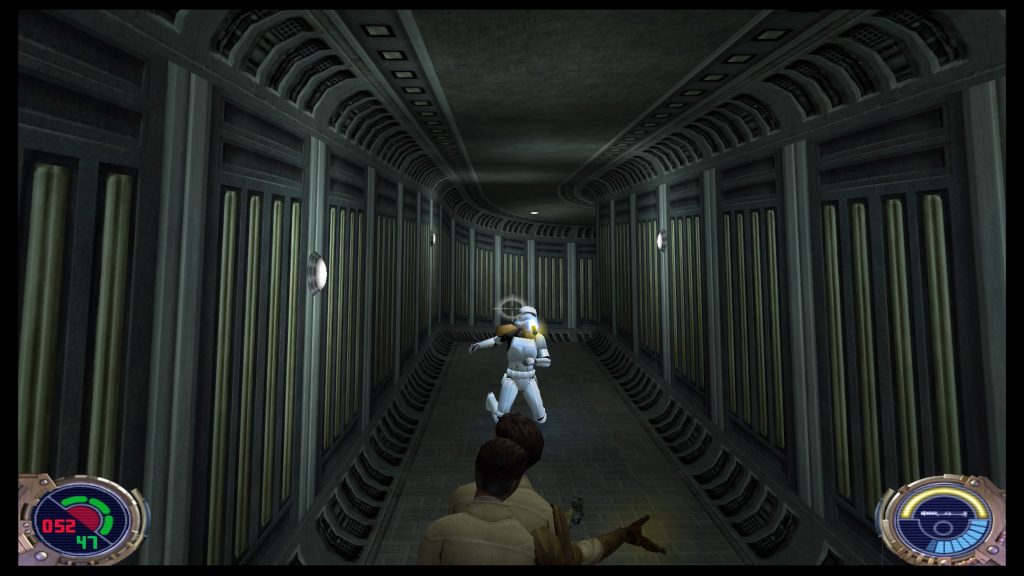 Of course, you’ll still be fighting those terrible level designs and obscure puzzles while save scumming but the fun and quality of the game does somehow shine through.  It does help that the game really gets the Star Wars feel right too.  While the graphics haven’t aged all that well, it still looks like it is part of the series’ universe but it is the sound design that really helps to sell the illusion with authentic sound effects and, of course, that John Williams score underpinning the action.   The plot is pretty good too, doing just enough to keep you engaged in the story but without resorting to too many cutscenes (which is good because the quality of any video stuff here is absolutely awful).

Fans of the original will be disappointed to see the multiplayer portion of the game didn’t survive the porting process, further reinforcing the feeling that this is as bare-boned a port as they could have possibly gotten away with.  That said, Jedi Academy, this game’s sequel, is also due to be ported over and will apparently have its multiplayer mode included.  Also, it was always the far better game and didn’t hide all the Jedi goodness behind five hours of bland shooter bullshit. 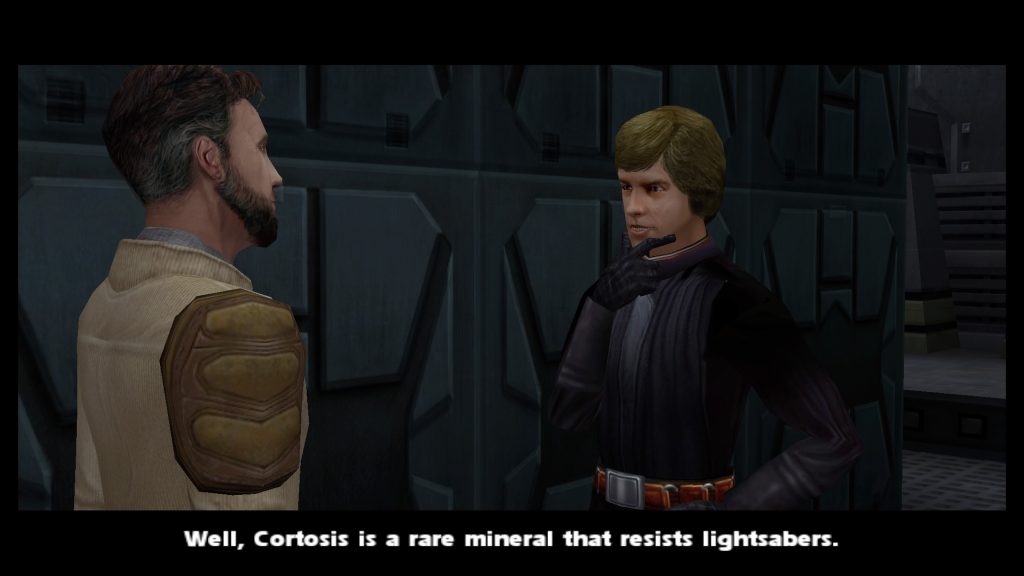 Technically there are other problems too including one level where the main character model doubled up for the whole level and two stages that played in a sort of windowed mode (a clear bit of lazy porting from the PC original).

Despite all the issues, and there are so many, Jedi Outcast is still a really enjoyable game and somehow still feels more fun to play than the Force Awakens and Battlefront games but despite this review ending up being a positive one, don’t forget that it comes with a LOT of caveats.  We’re really thinking about what score to give even to the point where right now the review drafted with screenshots in place and…. fine.  It’s a generous seven.  But that seven is all because of the game Jedi Outcast is at its best, even if the porting job is terrible.  Just imagine the game this could have been with some care and attention and a few modern day quality of life improvements.

Star Wars Jedi Knight II: Jedi Outcast
7 Overall
Pros
+ Excellent combat
+ Force powers are fun to play with
+ Authentic Star Wars atmosphere
+ Good story
Cons
- Terrible level design
- Hides all the good stuff behind five tedious hours
- Porting process has clearly been rushed
- Iffy controls
Summary
If you've not got the kind of patience to deal Jedi Outcast's dismal level design and dull first few hours, then you'd be missing out on some of the best combat to grace a Star Wars game ever. Even 17 years later, Jedi Outcast is still a lot of fun to play even if it really tries hard to not be.