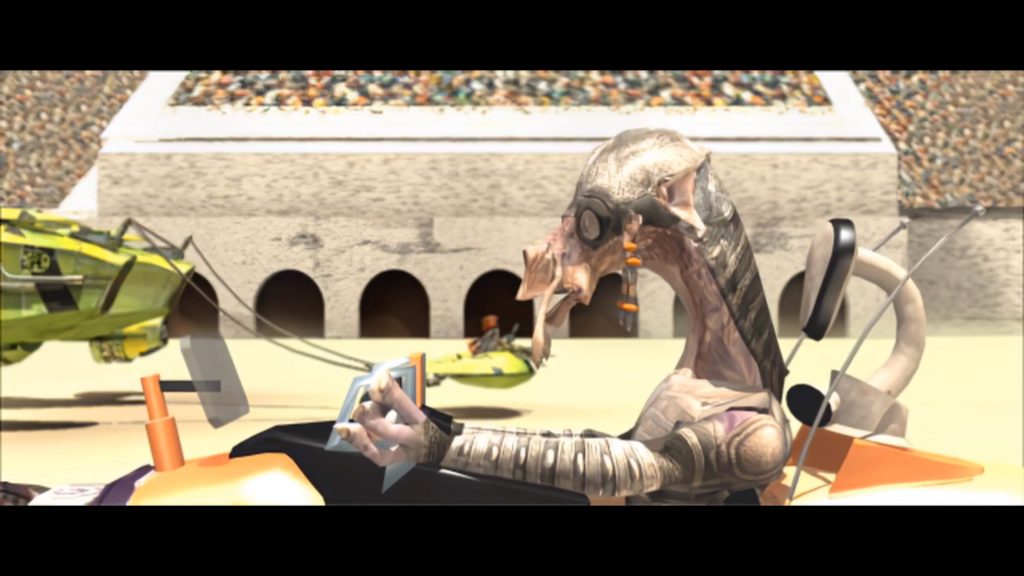 “Sebulba always wins” unless you play as any other racer in this title. In fact, i never saw him win a race.

It shouldn’t need to be said, but It’s been a tough decade or two for Star Wars. Depending on who you ask, the series lived and died by its first three outings, which still stand tall as one of the best movie trilogies to date. There a quite a few factors that have caused division in the fanbase, but you need only go to one of the many forums, tweets that will tell you why. Instead, I want to talk of a simpler time, when people rode on a high during the nineties after enjoying the first rerelease on VHS, a time when we naively and unwittingly looked forward to Star Wars Episode I: The Phantom Menace.

The excitement was palpable, sixteen years had passed since Return of the Jedi. There was so much excitement in fact, that cinemas were famously packed out just to see the first trailer for the new entry into the series. Nobody could have foreseen what was to come, nobody could have anticipated the schlocky political jargon, Jake Lloyd playing a young James Earl Jones or *shudder* Jar Jar Binks.

The rest, as they say is history. You can’t move anywhere on a movie opinion forum without seeing a jab or two in the direction of George Lucas. But for all the film’s faults, there were two shining moments that stood out. Darth Maul was a short-lived burst of lightsaber duelling awesome, and that pod racing scene was pretty good. 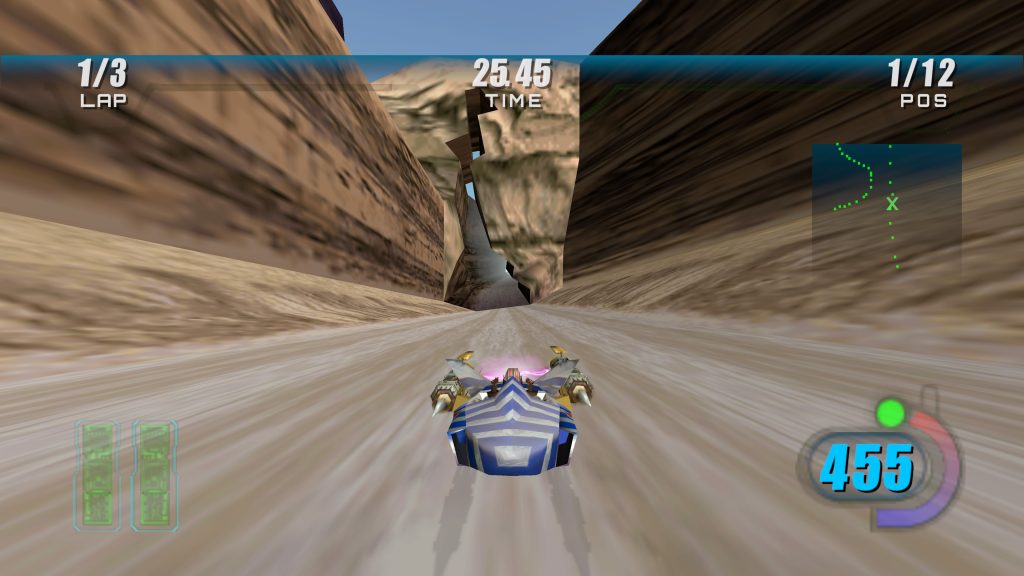 Obligatory “this is podracing gag” here.

It’s just as well then that Lucas and his cohorts have this innate ability to be able to market anything with a Star Wars badge on it, after all, there have been figures made based on Dengar, Jar Jar tongue Lollies and a figured based on a character called ‘Yak Face’. So, fabricating a video game based on a ten-minute section would have been second nature at this point. In June 1999, Star Wars Episode I: Racer released to N64 and Windows PC owners, one month before the release of the film, a bold move considering that this would be the first taste of the new trilogy to many.

At the time, the game was received well. The nineties were a good time to be releasing a high speed, sci-fi racer and compared to contemporary’s like Wipeout and F-Zero, Episode I: Racer did a remarkable job of standing alone and offering a pretty accurate rendition of the scene in game form. It looked great, played well enough and had plenty of character (for better or worse). I think the most interesting thing to note however, was that unlike other ‘good’ licensed games, this was not one that was really elevated by the license it occupied. In reality, Star Wars Episode I: Racer has little to do with the movie and the majority of characters are either completely fabricated for the game specifically or mere background decoration for the main plot, with that in mind it was quite a rarity for the time.

Cut to 2020 and while being an unlikely bet to resurface, Star Wars Episode I: Racer is now part of the retro resurgence of Star Wars games that have hit the PS4, sitting alongside Jedi Academy, Jedi Outcast and earlier ports of Bounty Hunter and Racer Revenge. It’s a fair question to ask whether a game that was designated for an N64 release can hold up compared to other Star Wars titles that provide more depth, storylines or combat. 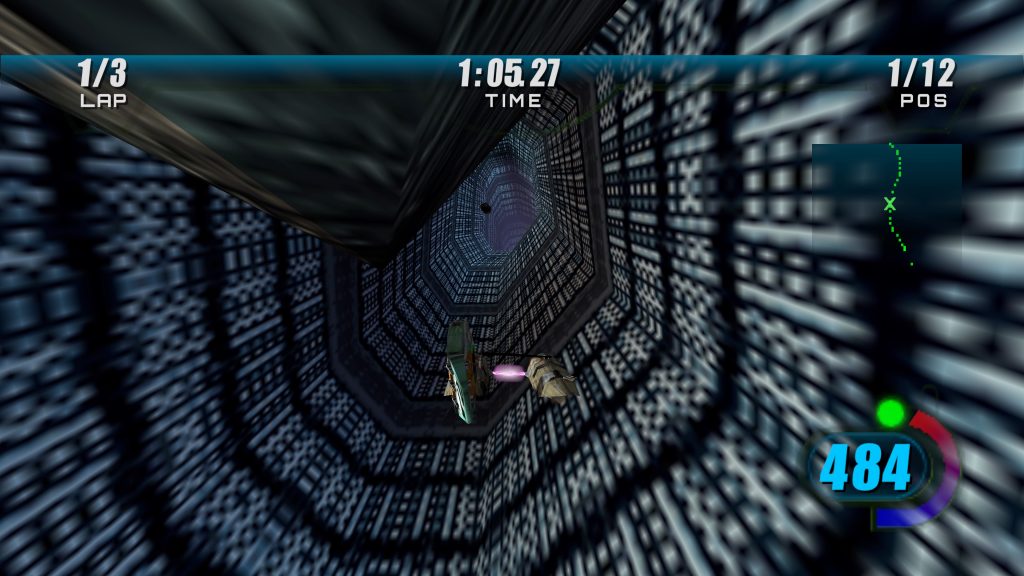 This tunnel section is still one of the worst things to happen since Gabrielle met East 17.

Thankfully, I can say that the answer is yes, with a few caveats. If you have ever enjoyed the original release of Episode I: Racer then there is a good chance that you will take to the rerelease incredibly well, on the basis that very little has changed from the original barring some quality-of-life control adjustments, a silky smooth framerate and some minor improvements here and there. This port is based on the PC version, which featured some improvements over its N64 counterpart, namely in expository planet cutscenes and a soundtrack that plays throughout each race, rather than the muted N64 version. Beyond this, no matter which version you played before, the game is fundamentally the same.

As a racing game, Episode I: Racer follows that futuristic, ship-based school of arcade thrills. Your average speed is over four hundred of whichever metric is being measured, resulting in a constant blur of scenery as you fling yourself through each stage. Control has never felt better thanks to the implementation of a more intuitive, modern button layout making the pod racers feel like a breeze compared to the haphazard clumsiness of the past that resulted in one too many insta-deaths at the hands of a wall that appeared out of nowhere.

Whereas before, each stage felt like a labyrinthine mess of assets and polygons, it is now far easier to see and appreciate the level of detail that was considered impressive for a late nineties video game. It almost makes the game feel too easy and as a result, I found myself leading the pack of racers unhindered for most of my time with Episode I: Racer. This is barring some of the odd difficulty spikes which still sting to this day, namely in the stage set in the sky with wafer thin platforms that cause you to lose several places in quick succession should you fall to a lower tier. 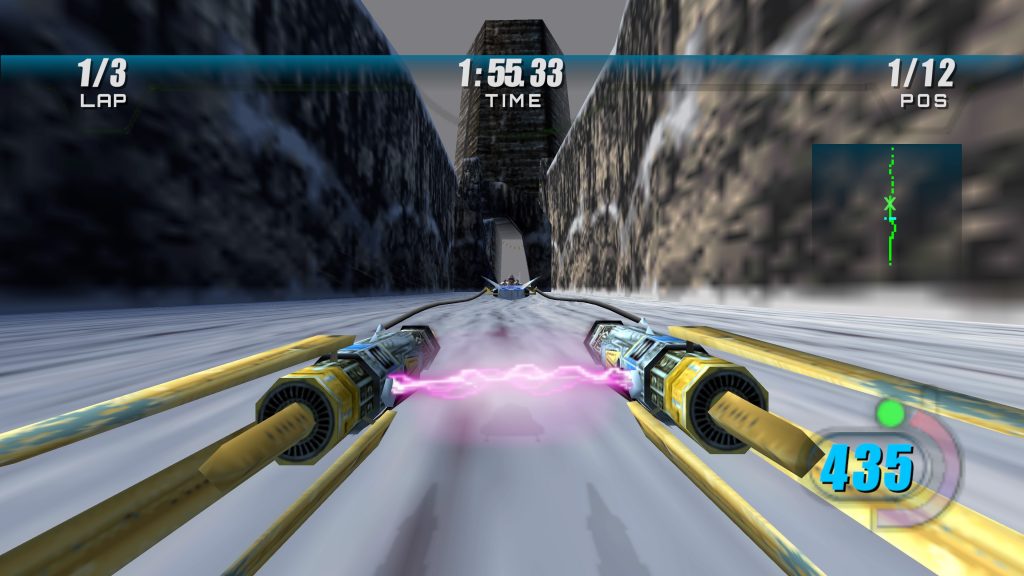 There is still a retro polygonal charm to SWE1: Racer, with (for the time) Incredibly detailed ships and moving parts.

While Episode I: Racer feels much better to play now, there is an odd caveat that comes as a result of this. You kind of miss out on some of the smarter aspects of the gameplay. For instance, there is a whole upgrade system that you can utilise to make your pods handle better, whether in additional speed on the straights, acceleration to make stop-starts punchier or air brakes more potent. These upgrades feel less like upgrades now as you don’t really need them for the most part. So, the whole progression system of winning races then spending your hard earned Truguts currency on better gear feels more of a means to an end rather than a necessity.

There is also the balance of keeping your pod in top condition during a race which gets lost in all of the quality-of-life improvements. Before, to keep you in the race you would need to ensure your engines did not get overly damaged by scraping walls or other racers by holding the R1 button to go into a repair state. There is also the boost mechanic which sees you being able to shoot forward with speed if you push the stick forward and hit X when your speed meter fills up. Staying too long in boost mode will send you into an overheat which damages your engines. Previously, due to just how much of a framerate blur that was the N64 version especially, you would need to press the button to repair your engines to keep them in the green and therefore at full speed, but that is lost somewhat considering i found myself hitting walls a lot less this time around. It also feels somewhat redundant when it can often be better to just purposefully slam into a wall as opposed to slowing yourself down to let an engine fix itself up.

There also used to be a bigger emphasis on repairing your pod in between races, requiring the purchase of a pit droid to fix up parts which had been damaged due to failed races or worn down parts that needed replacing to keep your pod in top condition, but none of this is really required if you can lead the pack consistently with minimal crashes. The other core goal you can shoot for is working to unlock all of the racers available to you, which is easy enough thanks to low difficulty. To see everything that Star Wars Episode I: Racer has to offer, it should only take a couple of hours before you cross the finish line in the Boonta classic, which was fine in an age where this was on a cartridge and replayed indefinitely because those things were damned expensive, but now and to some, this would make the game a somewhat throwaway experience, especially with the lack of mod cons like online multiplayer. 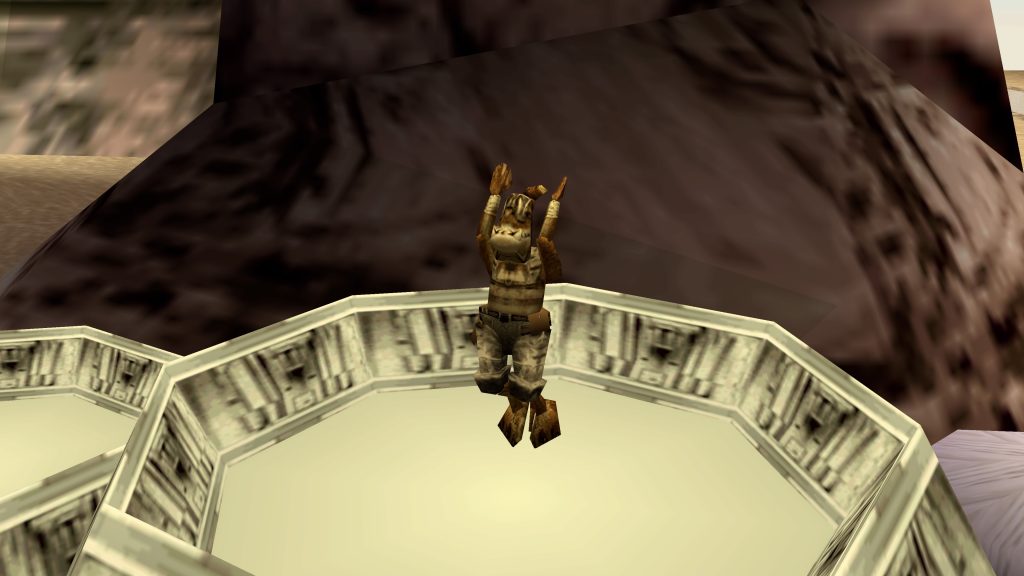 Still, Star Wars Episode I: Racer is a surprisingly good game to play despite being aged and somewhat shortlived. It’s arguably the best thing to come out of Phantom Menace alongside that excellent lightsaber duel at the end of the film. The port does a remarkable job of preserving the good parts, but also amplifies just how old this title looks and feels. One to play if you were a fan before for sure, but newcomers may find this a bit too rudimentary by today’s standards.

Star Wars Episode I: Racer
7 Overall
Pros
+ Improved controls are tight and very easy to get a grip on
+ The framerate is solid throughout
+ Fun trip down memory lane
+ Teemto Pagalies
Cons
- The years have not been kind to the graphical fidelity
- All too easy
- Little replay value
- Toy Dampner
Summary
While the years haven't been kind to the graphical fidelity, Star Wars Episode I: Racer still stands up well as a fun sideshow to the more traditional war games set in the series. The quality of life improvements to the PS4 port makes the game a more enjoyable racer to play overall, but the lacking difficulty and replay value makes this a shortlived experience. If you enjoyed the game back in the nineties and fancy a double dip, it will surprise you just how easy it feels now, but if you didn't enjoy the game then this port will do little to change your mind.