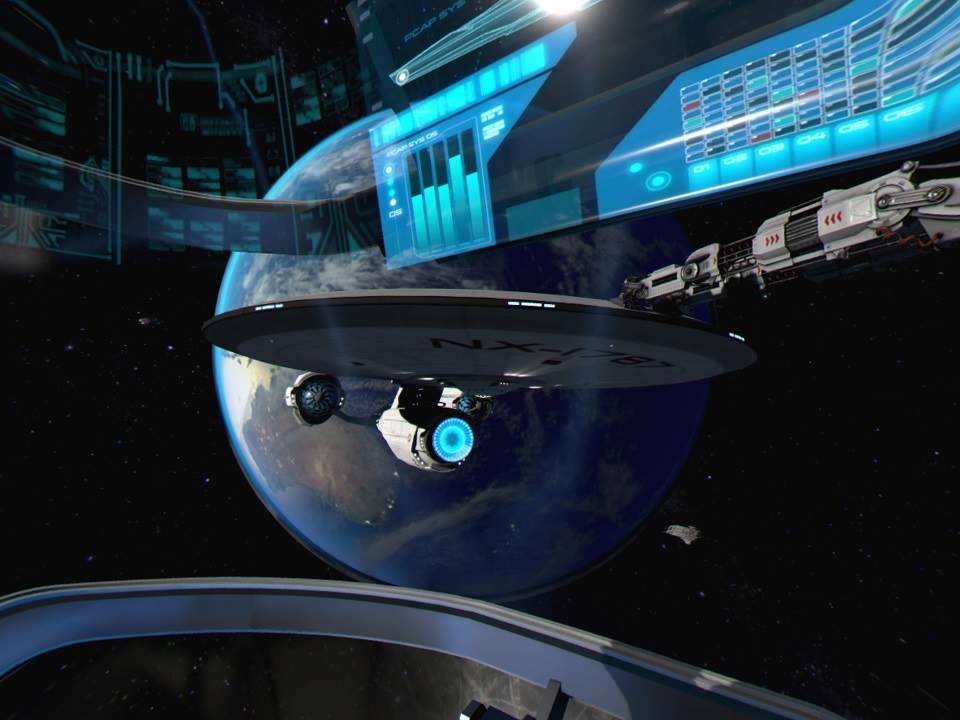 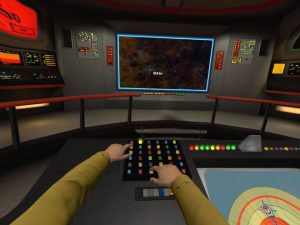 It’s safe to say that human interaction on the internet can be a bit of a mixed bag. This is especially true when we are talking video games. We can often be a volatile bunch, with cooperation seeming rare in the online world. So, when a game like Star Trek Bridge Crew VR comes along it makes me wonder whether an entirely coop based asymmetrical multiplayer can exist in this divided atmosphere.

Division is not the only thing standing in Bridge Crew’s way, there is also the caveat of being locked behind the significant VR paywall, having friends to maximise the potential and the anxieties of having a team of people relying on your moment to moment reactions. But somehow Ubisoft have pulled this out of the hat. Star Trek Bridge Crew VR is one of the finest multiplayers of its type.

Players can take on one of four roles within the bridge of the federation vessel known as the Aegis. You can pick between the engineer, whose job it is to manage the balance of power to the ships core systems and repairs when the Aegis suffers damage. The tactician station puts the player in charge of raising and lowering the shields, firing weapons and scanning targets for cargo or chinks in enemy armour. The helm, my favourite station puts the player in charge of steering the ship, engaging impulse and warp drives to jump from mission to mission. Lastly there is the captain, who takes a less control heavy approach and instead is installed to make the decisions, deciding in pinches whether to engage in combat, which destination to warp to and what to scan all with the use of pure verbal communication.

As each station is vital to a crew’s success it is vital that there is a training suite within the game to teach you the ropes. It’s at this point and the first time venturing online that the game feels the most daunting. There is a lot to take in at first, particularly on the engineering station which takes a lot of getting used to, especially when considering the rerouting of power of little used core systems to boost power to the shields or engines, the meddling of which can lead to crippling ship damage. I will say however that after a short while and after the initial anxiety with performing each station at least once I found myself able to comfortably fulfil any role in a short amount of time. This was of course, thanks in no small part to the initial crew that I encountered. 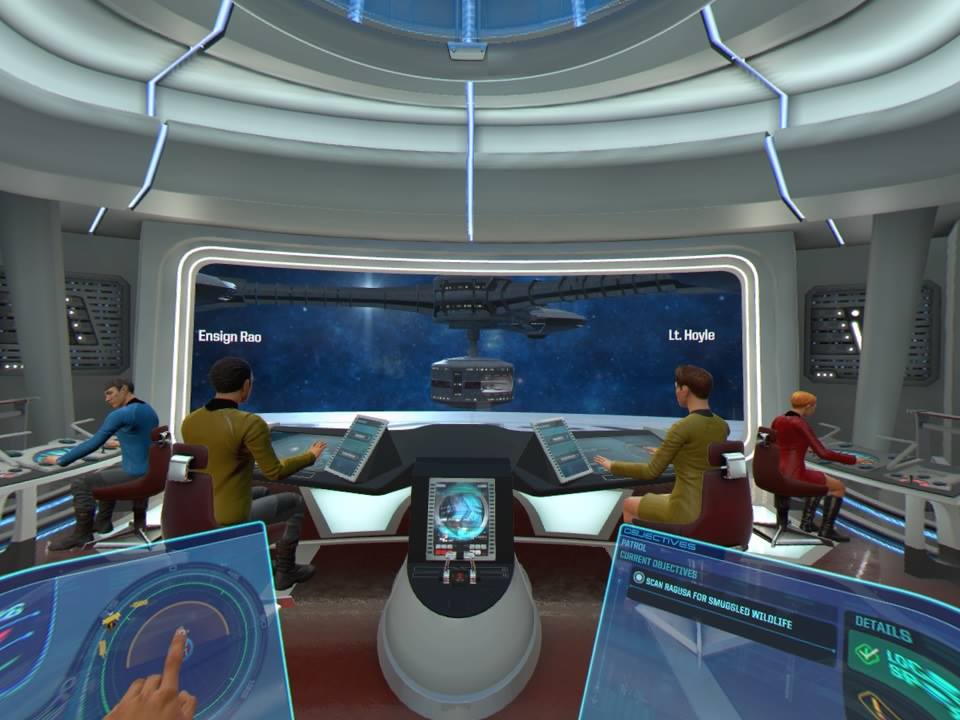 The beautiful thing about a game aimed squarely at Star Trek fans, is that the game has attracted passionate Star Trek fanatics. As such, the online lobby’s and missions had a welcome atmosphere to them for the most part. My first crew was one that welcomed newcomers with open arms, allowing me to slide right into the station I felt most comfortable with (helm) and took it upon themselves ease me in to the role as I piloted the Aegis through destructive anomalies and combat situations. Not only this, but there was an inherent and seemingly impossible to avoid inclusion of roleplay. With the captain spouting phrases from the show, from saying “On screen” for every hailing we received and “Punch it!” when deciding that we needed to warp out of a combat situation. It seems superfluous, but when you are playing a Star Trek game that dictates immersion then it makes it so much more enjoyable.

Not only do these interactions give a sense of achievement when you succeed in a mission, you also have a good time when losing. Often, failing in the mission can be a shared moment of hilarity, especially if your team is not taking things seriously. At one point, I played where we decided to boldly venture into the nearest sun, to see what happens. Unfortunately, the Aegis cannot fly near one, but we did go out to pick a fight with a few Klingon warbirds that absolutely decimated the starship due to our insistence of trying to take five down with no shields and power rerouted to cannons. While this was going on we simply delighted in spouting random sci fi quotes about disasters and laughing at the NPC’s as they flopped around the bridge, trying to do their most Oscar worthy death rattles.

Of course, this enjoyment is marred by the occasional nuisance that you will inevitably encounter. You know the ones, the ones that think it is funny to sit in the captain’s chair with distorted and incomprehensible music playing down the microphone. Normally this kind of interaction could be considered an unfortunate happenstance when you put four random people together, but in this game the interactions with your crew are essential to your success. If any one person does not pull their weight, then everything stalls until you can find a new crew to work with. To avoid these issues, you can jump into a single player mode where you can jump between stations or simply play as the captain and issuing orders, but quite frankly this mode is limited and later missions become a bit of a chore to play. 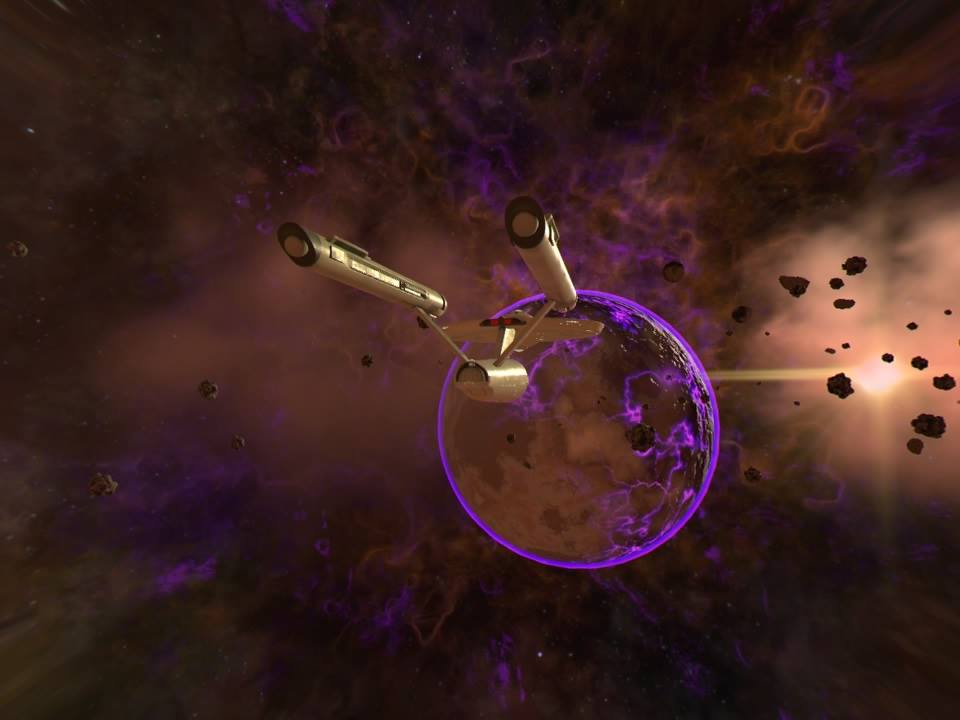 Luckily and worthy of note, the player pool for Bridge Crew is higher than you would expect. This is thanks to the fact that PC gamers can mingle with PS4 gamers. This helps greatly in keeping the game populated, prolonging the possibility of an exodus of players down the line.

In terms of mission structure i found this to be deeper than I expected. With tasks branching depending on which actions your captain decide to partake in. One scenario sees you entering a system with an unstable star and a bunch of escape pods. You have the choice of whether to scan and transport every escapee while fighting against the clock and the invading Klingons, or you can turn tail and run from the situation which can feel necessary when your engineer starts wailing about shield damage levels and not being able to do things. Of course, more points get rewarded for being able to complete tasks such as these, but overall you are not being penalised if you do have to get out of dodge. Which is a welcome approach if you ask me. 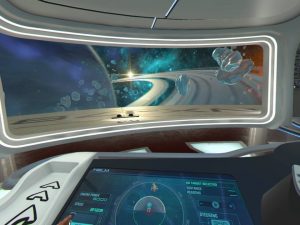 Beyond the five main missions you can embark on a larger randomly generated voyage which incorporates scenarios that you find within those missions. This is brilliant fun and if you have a good crew then this is where you will find the bulk of your time. While the scenarios give you a beginning and end it genuinely feels in this mode that you have full reign over the direction you take. It also lets you soak in the visuals and atmosphere of sitting at a station on the bridge of your own starship, which is an experience that cannot be understated at times. Ubisoft have done a great job of presenting the bridge of the Aegis and capturing the sounds that Trekkies know and love. This is a point that is driven home when you take on the hard mode challenge of piloting the original USS Enterprise, which has been lovingly crafted down to the utterly baffling control station controls.

Talking of controls, Bridge Crew can be played with either the standard Dualshock controller or via Move motion controls. In terms of player interaction there is a lot of amusement that can be derived from the motion controls as other players can see your 1:1 hand motions (usually resulting in a dab or two). Motion is also considered with head movements which can be eerie in practise as you can see the eyes of players as they watch you fail at your station. But to be honest, when it comes to the move controls I don’t believe they really add an advantage over the hilarity. I found myself quite capable, if not more so of being able to pilot the Aegis with a PS4 controller, each stick representing a hand and the pull of a trigger to push buttons or grab hold of levers.

Star Trek Bridge Crew VR
7 Overall
Pros
+ One of the best asymmetrical coop experiences ever designed
+ The ambient sounds and visuals of the bridge are superbly accurate
+ Mastering a station feels like a well-earned achievement
Cons
- Lives and dies by your crewmates. Get an abusive team and you will have a bad time
- Stiff avatar models affect immersion greatly
- Motion controllers can have poor tracking, not great if you are the pilot
Summary
Star Trek Bridge Crew VR is fascinating. It merges a lot of ideas and caveats that shouldn’t work or would be a barrier to entry but manages to overcome a lot of the potential shortcomings. As a VR experience on its own it won’t leave you too impressed, however as a cooperative VR title with asymmetric gameplay it would be difficult to find a finer example. Just be prepared to encounter unsavoury online types along the way, this game will live and die by its online multiplayer.