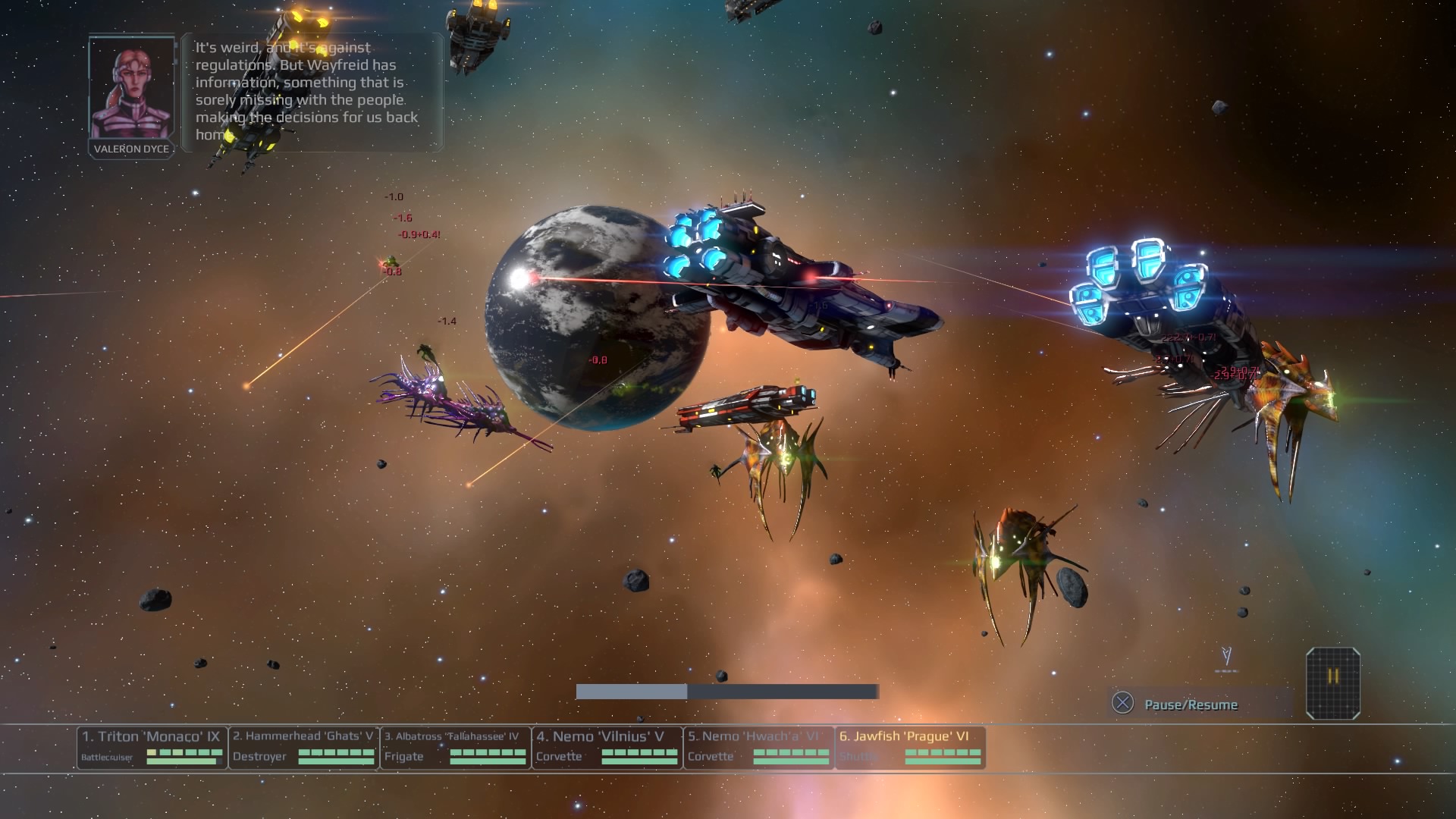 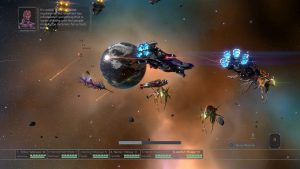 After over a year on the PC Black Star Labs have ported Star Hammer: The Vanguard Prophecy to PS4. A strategy game with tactical space combat, there’s certainly not a whole lot of competition on the system but does it deserve your interest?

You’re cast as Valeron Dyce, a newly-minted Lieutenant and the daughter of a war-hero. Circumstances dictate that Valeron falls up the employment ladder very quickly over the course of the game as her crew grows and the importance of her missions increases. There is actually a lot of story for a space strategy game, but it’s all presented with text. Not a massive problem but primarily you’ll get communications from people in the top left of the screen as you’re playing the game meaning you have to stop to read them. You can’t control these interactions either, so they play out very slowly. You can recap a conversation if you feel you’ve missed anything, which is a nice touch.

Thankfully you can afford to stop to read text as this is a simultaneous turn-based strategy game, similar to Frozen Synapse. You cycle through your units, moving them as you see fit before hitting play and everyone on screen acts out their motions, your units and the enemies. Initially this can seem a bit daunting as every button opens a menu which can lead to another menu and the first mission was a real struggle for me to get my head around what the tutorial was trying to teach me. However very soon after it clicked. Less from the tutorial which I did find quite confusing and more from just trying stuff.

The most basic thing you want to do is move your ships. They have a movement cone which dictates how far they can move based on size and the engine power and can move up and down but only to set heights, you don’t have full analogue 3D movement. If your ship encounters an enemy they will automatically attack with whatever weapon they have pointed in that direction. You can customise the autofire tactics if you desire, choosing whether you want to attack the closest, weakest, strongest enemy and so on. 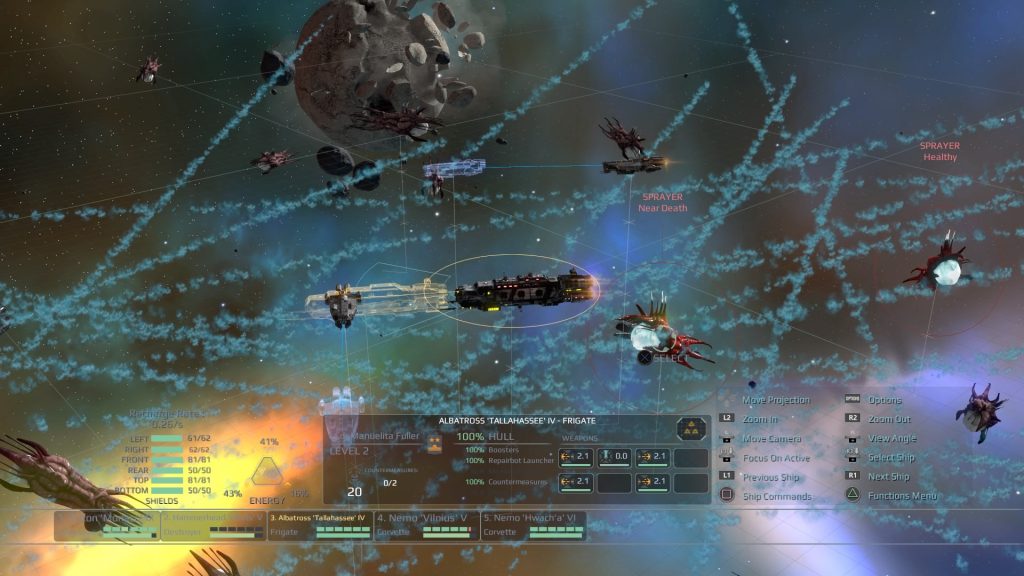 You can also force your ship to target an enemy for extra accuracy but they will only fire if within range. Beyond that certain ships have missiles you can fire which are very effective but limited in number and you have countermeasures you can fire to defend against enemy missiles though these take time to deploy.

You can also customise how your ship’s power is balanced between shields, weapons and engines. I personally sacrifice some movement for stronger weapons and shields but this will depend on your play style. Shields can also be adjusted once you start taking damage, so if you’ve been taking a lot of hits on the right hand side you can move power from the left to subsidise it. It sounds quite complicated but in practise it’s not too bad.

Once you’ve got these basics down you just need to manoeuvre around the ‘map’ taking out various enemies of shapes and sizes. Do you take out the little ones first who will go down quicker but aren’t a massive threat or do you go for the stronger enemy as they’re the ones that are going to hurt you? How you approach battle is also rated by the game as either ‘Aggressive’ or ‘Defensive’, with putting power into your weapons and getting up close and personal counting as the former and putting powers to shields and long distance attacks like missiles counting as the latter. 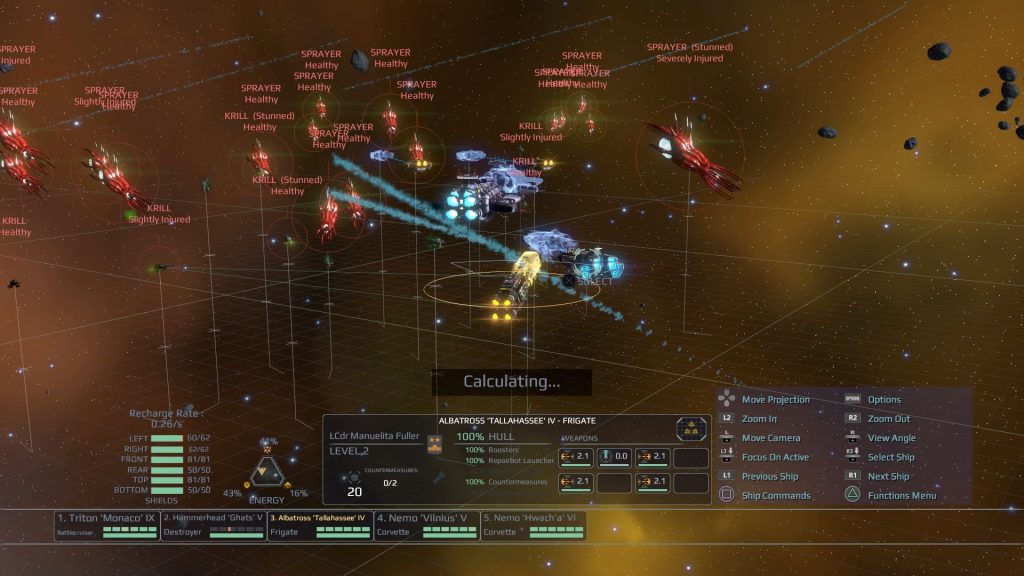 Supposedly depending on where you are in the scale of ‘Defensive’ and ‘Aggressive’ means the story branches but that seems a little forced as I was swinging between the two constantly just adapting to the levels at hand, so it doesn’t feel like you have much say and to be honest I never felt like the story was reacting to me being more cautious or otherwise. It’s just an arbitrary ‘if you’re on this side of the scale you get this mission, if you’re this side you get that one’.

Similarly as you progress through the story you get new crew members who make up most of the chatter in the top left. As they level up you can get bonus stats like 5% bonus to shields or weapons which you can chop and change as and when you like. Thing is depending on what you choose changes that characters personality, say from ‘Playful’ to ‘Sarcastic’ or something. There is a line going between each member which changes colour depending on how well they’re getting on, green being good and red being bad. The only thing that changes this is the bonus stats, so you’re forced to choose the stats based on this other system for some reason. It just felt like it was in the way.

The campaign is a very good length and with the branching paths you’ll need to play it more than once to experience every mission. Beyond that there is a Skirmish mode where you can replay levels with any formation of ships you like or just play a randomly generated level if you prefer. There is no multiplayer if that’s your bag but that doesn’t bother me personally. 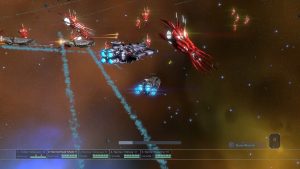 Presentation-wise things are okay. The character portraits are merely all right but small enough that it doesn’t matter too much. Space tends to look great no matter what but here when there are lasers and missiles flying all over the shop with ships weaving in and out of one another it does look good, though more variety in the weapon effects would have been nice. Ships look decent and as you progress through the story the bigger ships you get do impress and make you feel like you’re getting more powerful. Music is constantly playing and there are some great tunes in here that feel suitably epic as you’re fighting through space or planning your next move.

Unfortunately, there are a couple of bugs or poor decisions which mar the experience a little bit. When assigning character traits as you scroll through the game simply resets what you’ve done making that system nigh on completely broken. For some reason when in the planning stage of a mission where you can set your formation R2 zooms the camera in whilst L2 zooms out, but during the actual battle L2 zooms in and R2 zooms out. How did that get past anybody? Also, this is yet another indie game released on the PS4 with glitched trophies as you are supposed to unlock some as you gain new crew members yet that didn’t happen for me. I think this has been the case for the last five or so indie games I’ve reviewed.

All in all Star Hammer: The Vanguard Prophecy delivers. The strategy isn’t necessarily the deepest out there and some of the systems don’t feel fleshed out enough but taking down a superior force when outnumbered feels great and there is just enough tweaking to do with shields and power systems to keep you busy beyond just pointing where you want your ship to go. You aren’t spoilt for choice regarding strategy games on the PS4, and space ones are even rarer, but Star Hammer: The Vanguard Prophecy would be worth checking out even if that wasn’t the case.

Star Hammer: The Vanguard Prophecy
7 Overall
Pros
+ Just enough strategy to keep things interesting + Good amount of single player content + Great music
Cons
- Some underdeveloped systems - No multiplayer will disappoint some - Glitches
Summary
Star Hammer: The Vanguard Prophecy is a space-based turn-based strategy game and you don't see many of those on PSN. But it's not just worth checking out for rarity value alone. The gameplay could have used a bit more development in places but Star Hammer offers some epic battles for armchair space commanders.