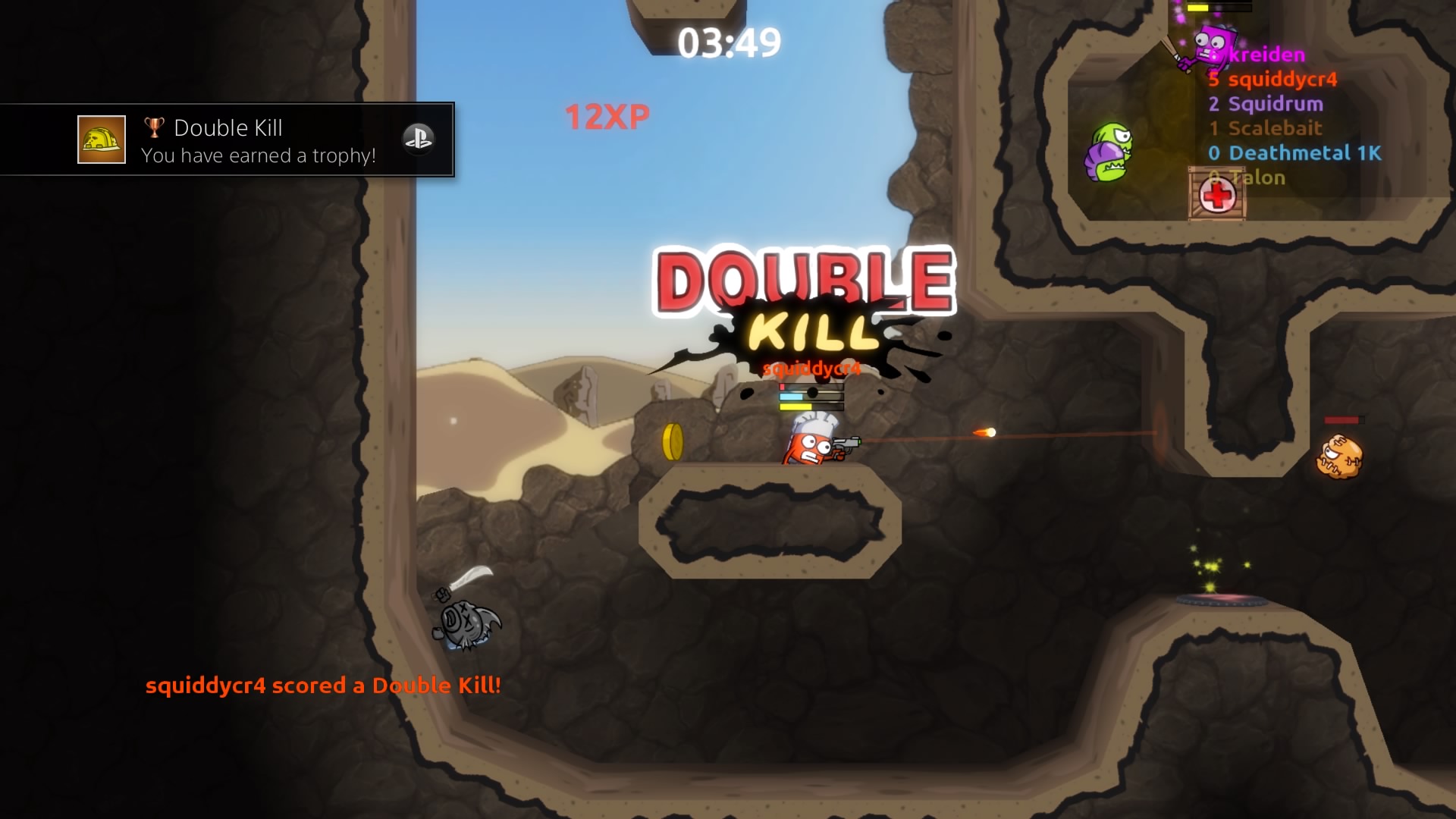 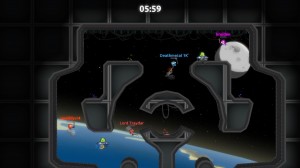 As far as first impressions go, Square Heroes isn’t a game that’ll wow you. Without being unkind, most people wouldn’t give this game over a minute to prove itself if it was free on PSN and, well… it’s not free. So, Square Heroes‘ basic presentation isn’t going to attract much attention.

Now this is a problem because, there is some fun to be had with Square Heroes. In multiplayer. But last night, just one week since it was released, there were 17 people playing it. In the whole word. Next week there will be single figures.

The game itself is an arena shooter of sorts. It looks a bit like Worms, the old 16-bit classic, but plays more like Rocket Riot, a decent thrusty/shooty Xbox Live Arcade title from a few years back.

You either play as an individual or as part of a team in various multiplayer modes across a handful of small arenas. The modes are a mix of deathmatch modes, a capture the gnome type thing and a couple of co-op modes. In all of them you fly around the screen killing smaller enemies that drop coins. These coins unlock your weapons. Initially you start with just a melee attack but eventually unlock a small gun then a large one, an explosive one and eventually a pack (that can heal, give ammo or have attacks in its own right). 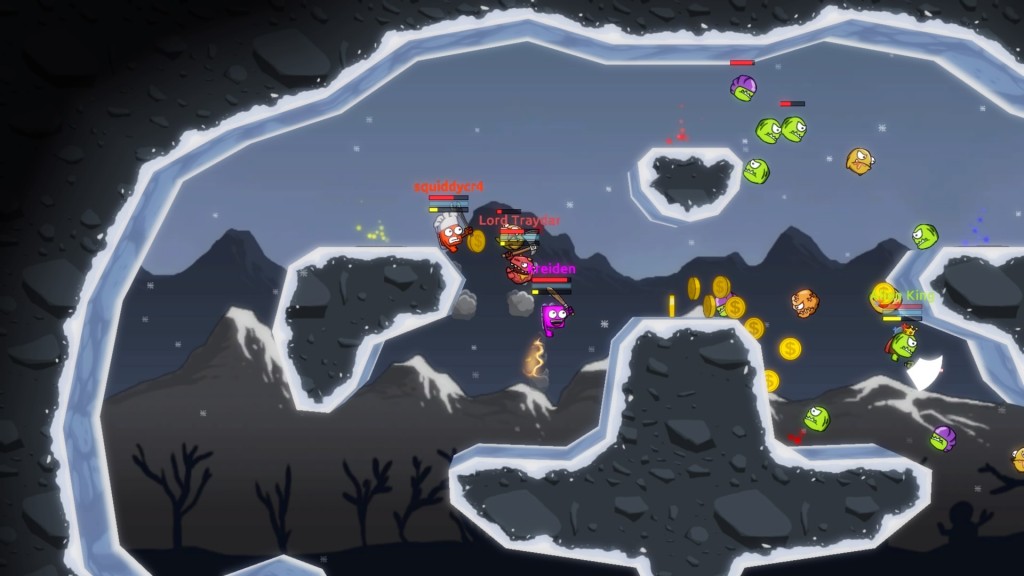 Any game can be a mix of human and AI players. The AI isn’t amazing, there are five levels of AI but they seem to affect aggressiveness rather than actual smarts. Still, it’s pretty handy given that finding a six-player match is basically impossible.

It’s a simple system but it works. You need to watch your ammo to make sure you don’t bring a hammer to a grenade launcher fight later in each match, which means the game can’t quite descend into pure chaos. The twin-stick controls are tight (although this is one of those twin-stickers that uses a fire button) and the rules are pretty simple. You’ll be chipping away at your enemies’ health, kind of like Smash Brothers, which means it’s not quite as devastating and tactical when it comes to combat. 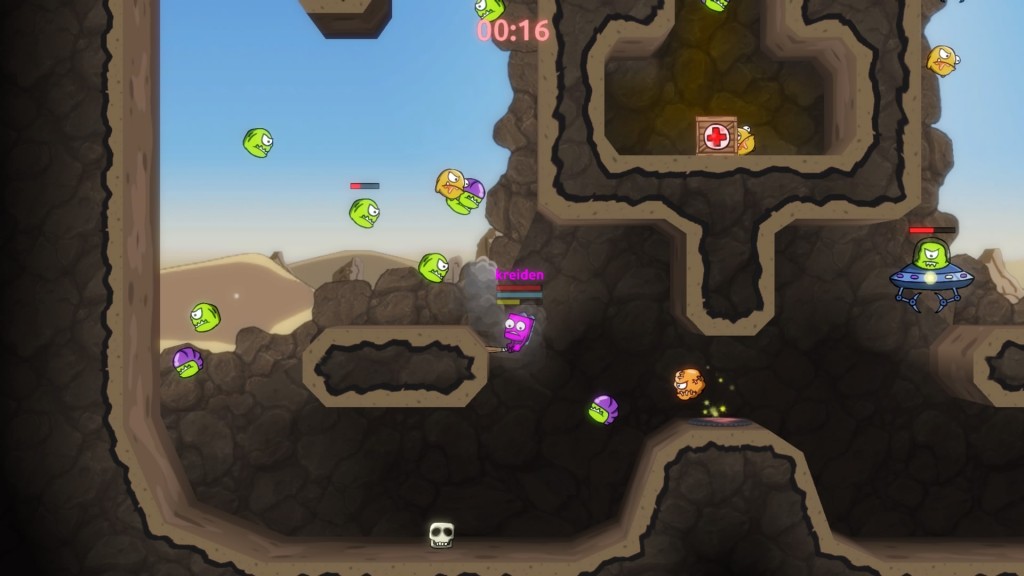 A single-player campaign is available which is just a sequence of arena battles against AI foes. It’s almost fun but, as with the rest of the game, the simplicity of the presentation and gameplay is so underwhelming that in the end it almost feels insulting.

Rocket Riot on the Xbox 360 used exploding voxels (or something) to give the game a brilliant, chaotic look and it was great fun – at least until the horrible final – but Square Heroes isn’t as entertaining and ultimately feels a bit like a college game dev project. 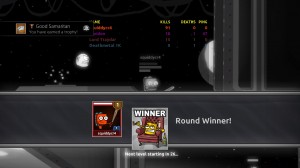 There are new weapons to unlock. These give the game depth (but kind of hurt the online balance of the gameplay) and there are some costumes to collect but it’s all pretty thin. There are only six arenas to play in as well, so you’ll have seen everything within the first hour. If that.

The game’s saving grace is the online play. So many games recently are couch co-op only, dooming them into obscurity immediately, but Square Heroes has both options and it may function as a party game. Just don’t expect the limited appeal to be lasting.  On early impressions the game is a five.  Not a ‘bad’ five.  There’s something to like here if you want a party game.  But it’s just about good enough.  That’s all.

However, if you’re fancying a single player game, it’s fun for a while but then Gnomic Studios throw in the absolute worst end boss of all time.  Aggressive, pinpoint accurate, able to regenerate health and ammo, able to absorb huge amounts of damage and able to kill you in one shot.  Absolutely broken.