After a short stop on the PC Spaceland has arrived on PS4. At first glance it looks like an XCOM clone but in reality it’s more of a puzzle game with familiar strategy mechanics. This isn’t necessarily a bad thing, but what does it take from the formula, what does it leave out and what ideas of its own does it bring to the table? 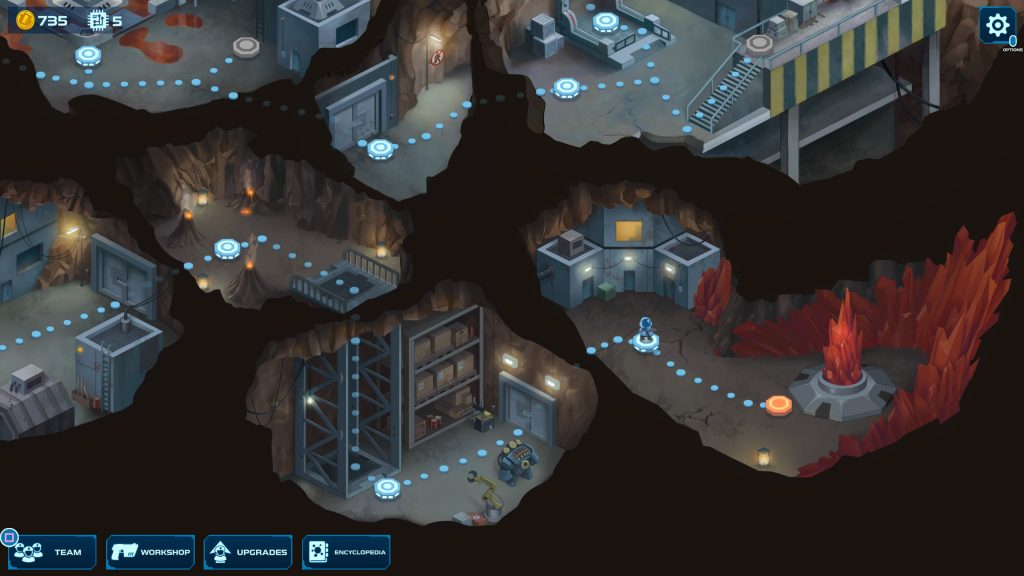 When reacting to a distress signal on an abandoned planet Jim and Barret, two Space Rangers, crash land due to stormy weather. Jim wakes up in the medbay and assumes Barret has gone to do some reconnaissance and so your adventure begins. Jim is a Scout, so he can move pretty far but his weapon isn’t the strongest. In the second level you’ll find Barret who has a shotgun, so is very strong but has to get in close. As you progress you’ll discover and unlock new characters that will bring their own weapons and skills to the table.

The campaign is split into 28 pre-designed levels which start off very small but never grow too large. In these levels you move your characters in a turn based fashion, with action points dictating how far you can move and how many attacks or special abilities you can use per turn. Using what limited actions you have to defeat any threats before they get a turn is vital to your survival and completing the levels effectively.

You can attack with a primary weapon which can lose effectiveness the further away from your target you are but you also have a percentage chance to hit as you’d expect from this type of gameplay. Cover comes into play as well but it’s less vital than normal, with plenty of enemies being melee only. You’ll eventually gain access to secondary weapons which are weaker but have infinite ammo and a couple of abilities per character. 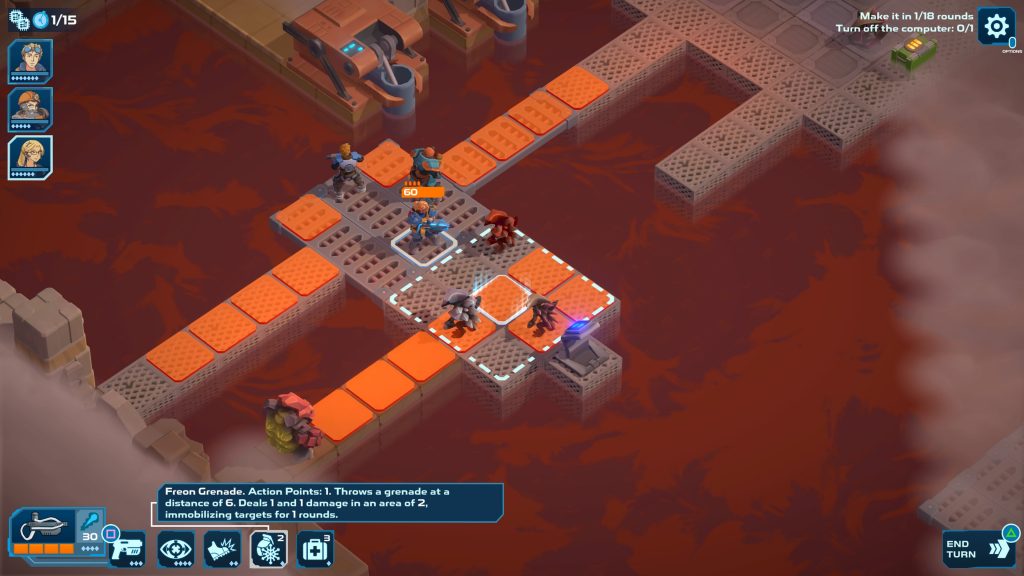 Speaking of ammo, simply reloading when you get the chance is not an option in Spaceland. Adding to the puzzle element is the fact that once you’ve used all the ammo of your weapon (which can be as low as three shots) you’re out and you can only reload at single-use ammo containers. Planning out your character and ammo use and your path through the level will help you complete the challenges that each level offers.

There are two difficulties, Easy and Normal, and there are challenges like all characters surviving, completing the level in under a certain turn limit and finding a hidden secret. Completing these will net you some rewards in the form of money and chips. Money is spent on upgrading your weapons and armour, but the upgrades only become available as you reach them in the story. Chips are used to upgrade your character’s abilities, allowing you to use them more often or making them more effective. You can replay levels to try to achieve goals you failed previously, but once done you can only grind out money from the small amount you get from killing enemies. 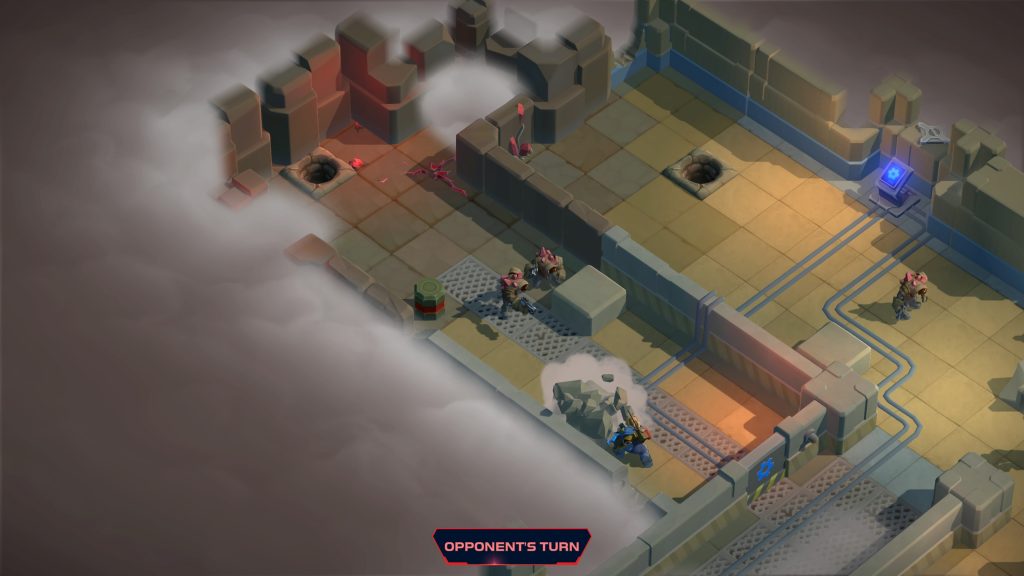 Because of this I found there were times later on when I simply couldn’t afford to upgrade my characters for multiple levels after they became available which was a little frustrating and as the levels are set there’s not a whole lot of fun to be had replaying them again once you’ve done everything.

In fact, that the levels are set in their ways with little room for variation meant I was struggling to play through more than a couple of levels at a time after the initial burst through the shorter earlier levels. Yes, once you’ve unlocked more characters you can sometimes choose which ones to bring with you but in reality you’ll play through it to completion once, then if you missed some of the challenges you’ll play through again with a slight variation in order to complete it quicker or finding the hidden secret so that you have the upgrades that’ll make your life easier going forward. As you’re not reacting on the fly to what’s happening it loses a lot of the tactical excitement of an XCOM and that’s before you even think about losing the base building aspect that breaks up the action. 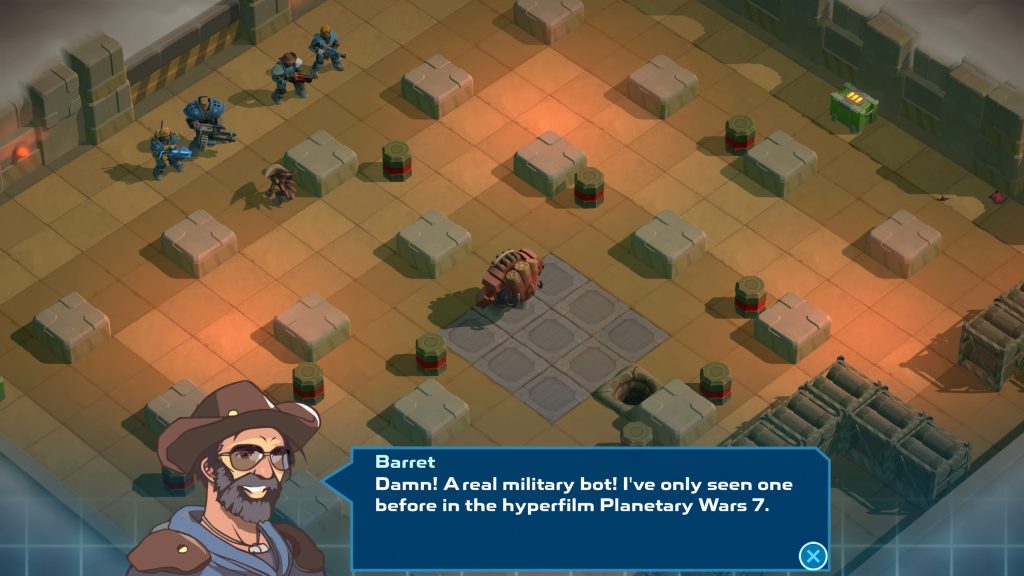 Spaceland is a strategic puzzle game that would probably suit mobile as I found myself dipping in for a couple of levels before having to leave it for a time. The nature of the levels make the XCOM comparisons rather inaccurate but those that prefer the more structured, puzzle-like approach will probably enjoy planning their routes through each challenge.

Spaceland
6 Overall
Pros
+ A different take on the strategy formula
+ Challenges give you a reason to replay levels
+ Each character is quite different
Cons
- Levels start to feel quite samey
- Upgrades and rewards seem out of sync
- Levels don't allow much variation in tactics
Summary
Spaceland may look like an XCOM clone but it offers a more puzzle focused take on the strategy genre. The limited ammo and level challenges make each short level a problem to be solved rather than a battle to endure. The variety suffers a little for it as does the lack of base management to break up the action but it's a fun game to dip in and out of.