Spacejacked is an usual cross between a side-viewed run and gun shoot ’em up and a tower defence game that is out now as a cross-buy title for PS4 and the Vita and comes to us by way of Singapore-based indie coders Rotten Mage.  The game follows the exploits of an astronaut, Dave, who has to use his engineering skills to protect his ship and rescue his crew from the evil aliens that want to destroy all humans and wreck everything.

The concept is a little bit like the first episode (’33’) of the Battlestar Galactica remake. You are attacked by aliens and have to defend your ship long enough to fire up the hyperspace drives and escape but they’ll soon be back on you. These aliens materialise in one of three rooms on your ship, looking to destroy that room’s core.  Losing just one is enough to send you back to your last checkpoint. 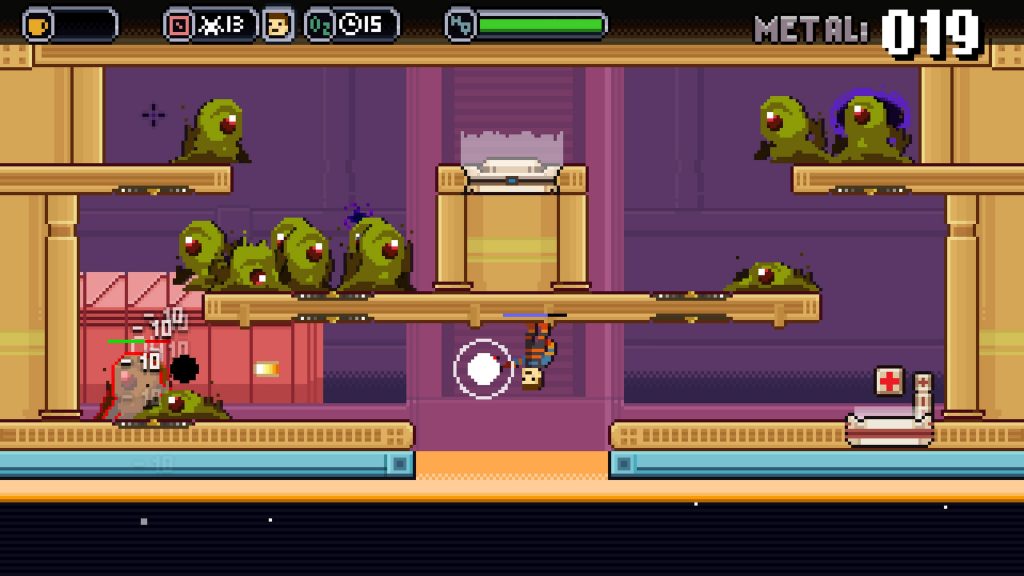 Dave can use the ship’s teleport system to go to whichever room he is needed in. Once there you can run around as expected but pressing up (on the d-pad or left stick) will make you stick to the ceiling, which is how you get past gaps. It sounds odd but really works well and allows you to flow around the levels better than if it had been a gravity-based platformer or something.

While you are armed with a pistol, it’s not exactly all that useful thanks to its heavy cooldown requirements and so you’ll need to build turrets to fend off the alien scum. These come in three flavours. ‘Gun’ is your basic machine gun tower, ‘Laser’ does heavy area damage (but at a slower rate) and ‘Stasis’ turrets will slow down aliens briefly. Turrets require metal which is the game’s basic currency and this is earned by killing aliens (and collecting the scrap that they drop). Thankfully, you can sell towers for full price whenever you want, allowing you to temporarily boost up certain lines of defence where needed without incurring any penalties.

These turrets can also be upgraded, at a cost, which you’ll need to do because, initially at least, Spacejacked is savage. Swarms of enemies will come in and walk right through your defences and so you’ll need to learn from this and adjust accordingly.  There are only a few places where you can put your turrets which does limit your options but you’ll probably have to explore a few of them, especially when you end up having overlapping alien waves attacking multiple rooms. 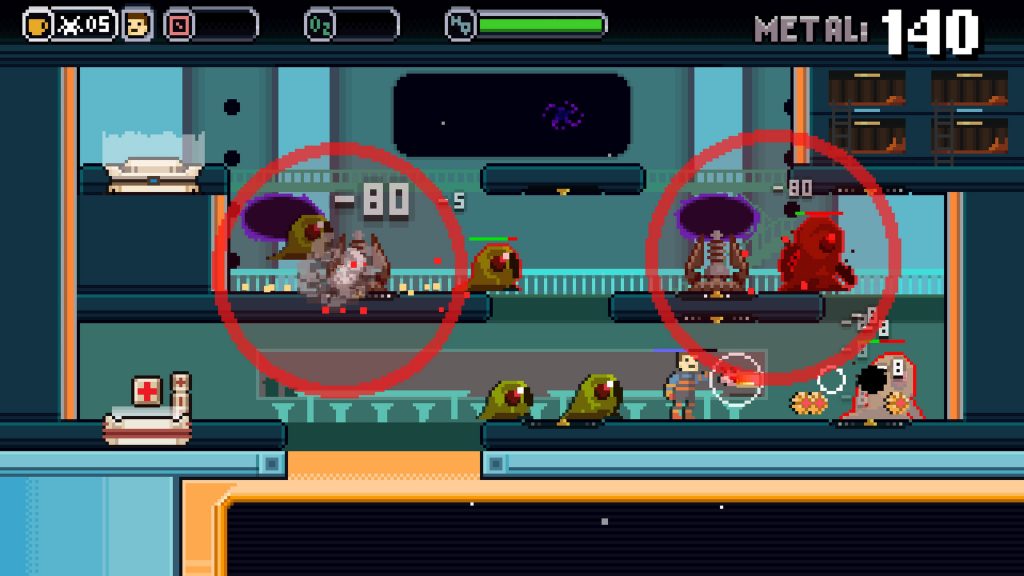 During the story you’ll be tasked with rescuing your crewmates who will then offer help in one of three ways.  One of them can upgrade your blaster, one can reprogram your turrets to act differently (pro tip:  switch up the ‘Gun’ turret but leave the other two unchanged) and the last allows you to send out a drone to collect metal.  This plays out as a very basic side-scrolling shoot ’em up but is a welcome feature and a nice diversion from the alien onslaught.  The additional scrap metal comes in handy too although you can only do this once per day in the game.

There are twenty days to get through (each acting as a checkpoint) and they contain a few attack waves.  The first ten are the first ‘act’ of the game.  The second half of the story is set on another ship which has a different layout.  The odd thing is that while it still has three main rooms, these all lead to a final room with one core to defend.  After the struggle of the first half of the game, the second half was almost too easy as it was pretty obvious how you should defend the core (put all your guns there and ignore the three feeder rooms for as long as possible).

Overall though I did enjoy the game’s campaign and even went back to play it twice.  You’ve got too options when you start it up, ‘Badass’ mode gives you a lot less time to prepare which is how the game should be played but you can opt for ‘Planner’ mode if you wish.  There is some value to be had beyond the main campaign with an endless mode to battle through as well as individual challenges.  These are far harder than the main game and there appears to be a lot less flexibility here for creative solutions it seems and so you’ll need to find out what solution works.  I don’t particularly like that trial and error aspect in games and while it was part of the main campaign, it worked well in that context.  In the challenges everything seems a little too harsh to be fun. 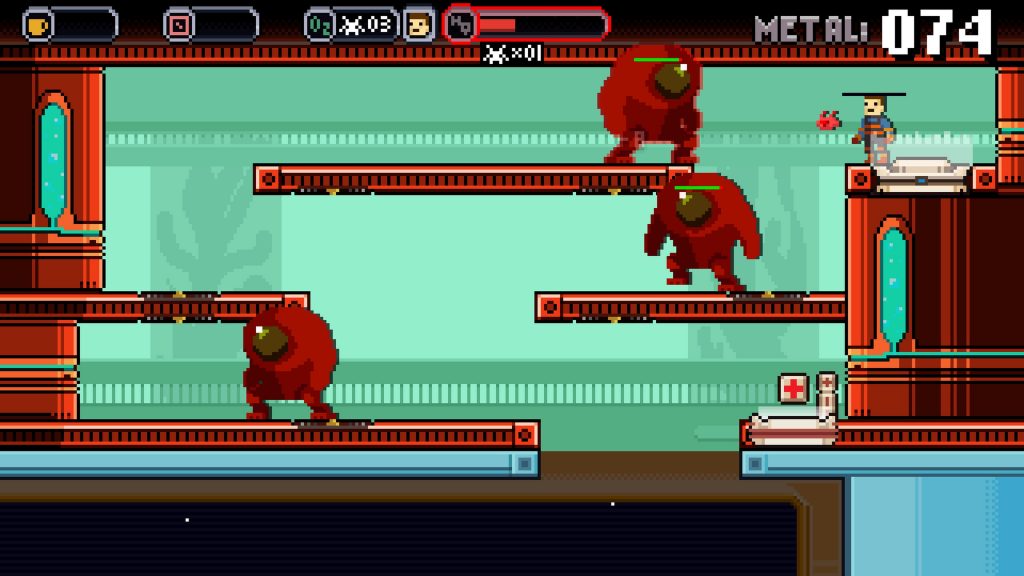 The game uses simple retro graphics and music and while these do their job but we’d have liked to see more use of the PS4’s power.  Sure, the game’s a cross-buy title but even the Vita can do a bit more than this.  It gives the game a cheap feel that lets it down a little but that doesn’t detract too much from the fun and at least gives you all the information you need to play.

So while Spacejacked‘s tough, and inconsistent, level of difficulty and mediocre presentation stops the game from being essential, fans of arcade style shooting and tower defence will no doubt have a blast like I did.  Planning and executing a good defensive strategy does feel rewarding and when you’re trying to clear out one room while another is under attack, there’s a level of chaos that just adds to the fun.  But this isn’t a game that is going to be for everyone.  It’s a hard game to recommend but will no doubt earn some loyal fans with its hectic action and its humour.