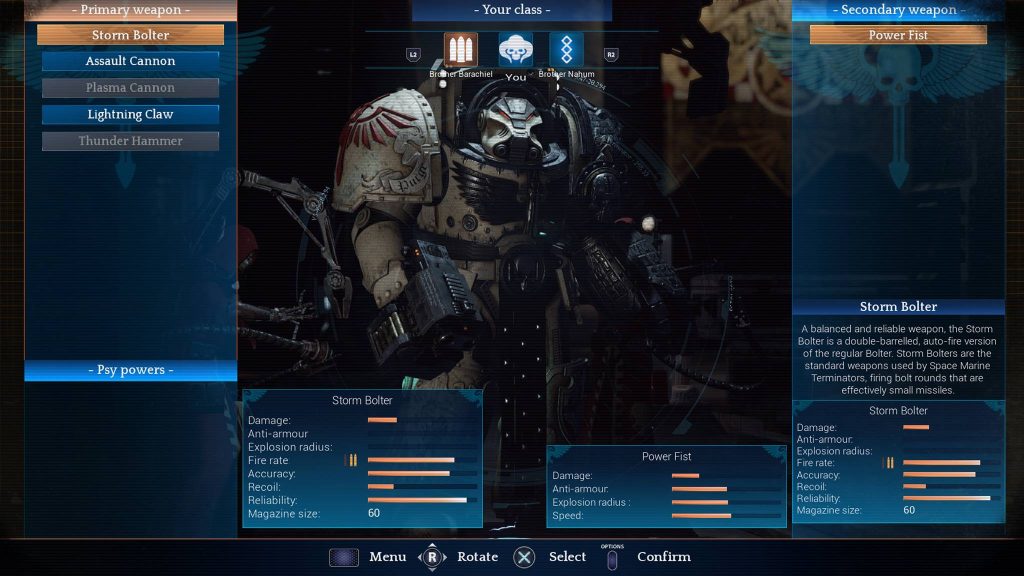 Space Hulk: Deathwing represents everything I have always wanted in a Warhammer 40k game. While the series is famed for its tactical, methodical gameplay on the board and previous video games, I have often found these quite hard to get into due to their huge learning curves and reliance on knowledge of the franchise to get the most out of it. Deathwing however, has a more palatable premise. It’s a first-person shooter with tactical elements that sees you walk the narrow corridors of derelict ships, fighting xenomorph-like Genestealers of varying size and shape. There is not an awful lot to hate in that premise, however the execution and reality betrays this significantly, making this a textbook case of being careful what you wish for.

The problem is that the game, setting or characters aren’t nearly as interesting as they seem on paper. Space Hulk: Deathwing makes no attempt to ease the player into the wider Warhammer universe and immediately hits you with franchise jargon that is completely impenetrable to the casual observer. Luckily, all you need to know is that you play as a team of elite marines of the Dark Angels and you must venture into derelict ships to purge these of the residing alien race known as the Tyranid Genestealers. The Dark Angel team is kitted out with incredibly powerful terminator armour that essentially makes the user a walking tank. 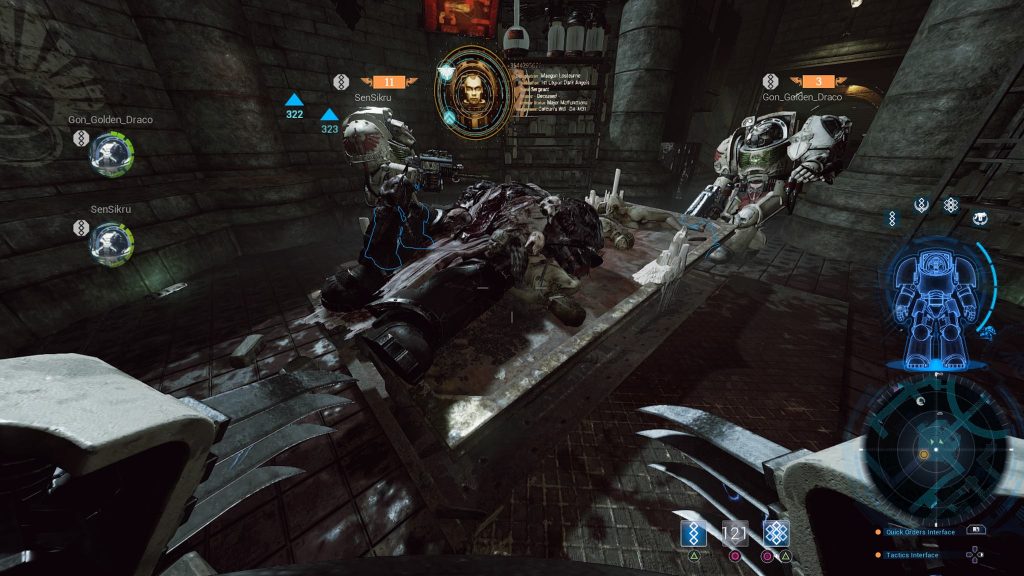 At first, the heavy movement of the armour gives a wonderful sense of empowerment, but this soon fades when you realise just how slow and laborious this aspect makes the game feel. Each ship you enter is huge in scale and the long winding corridors just compounds the fact that your character is incredibly slow. This is made even worse by the way each mission is laid out, often you are sent from one end of the derelict to another with very few objectives in between that space to help improve the pacing. This makes the game both boring and predictable, with most objectives being the furthest point away from your character when you receive them.

The only thing between you and your objectives are a range of enemies that seek only to slow down the pace further. These come in the form of the previously aforementioned Genestealers which are a race of insectoid six-limbed creatures that simply run at you and wail on your armour mindlessly. This evokes the same kind of feelings that Left 4 Dead or Warhammer’s own Vermintide had, but the resulting chaos is a calamity for the senses and can sometimes bring the frame rate to a standstill due to the number of things happening at once. There are some variations of these, such as the scythe armed larger tyranids or the hybrids that can take potshots at you from afar with lazers, but otherwise there isn’t really any defining attributes that sets these apart from the mindless drones that you mow down on a frequent basis. 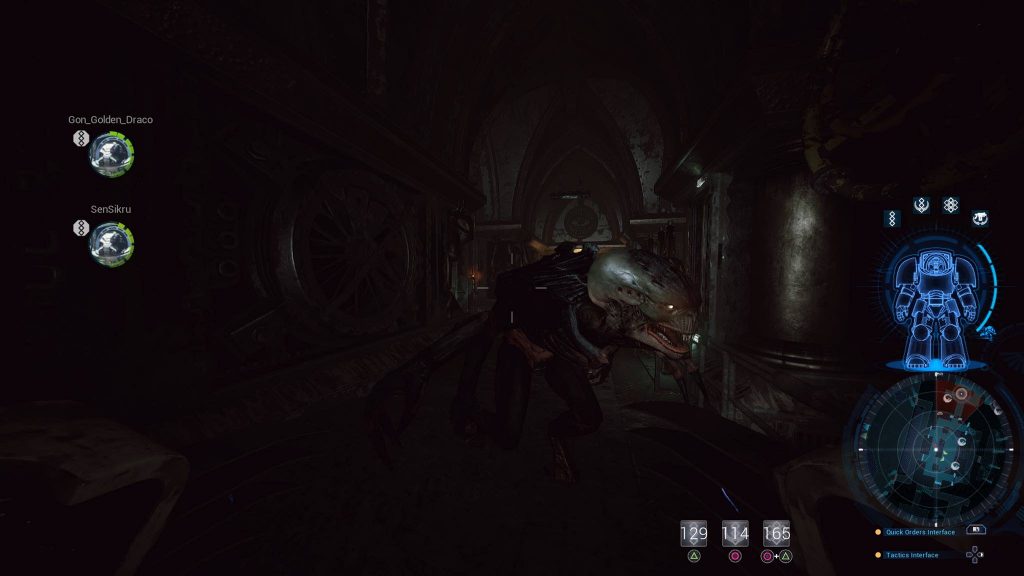 This kind of combat approach doesn’t really lend itself to skill-based mechanics and this means that some weapons are completely redundant for your arsenal. You unlock these as you progress through the chapters of the game and range from the basic heavy bolter rifle to the wolverine style claws which allow you to get up close and personal in battles. Gunplay feels fine enough if you pick a rapid-fire weapon that ventilates everyone in a close spray, but melee combat and single shot weapons like the plasma rifle feel stodgy to use and far too slow to keep up with the onslaught of enemies in your path.

Combat becomes even more of a problem when you consider that this is a team game. The hulking space marines take up a large amount of screen real estate in the thick of it, thanks to their amour and the tiny corridors that you explore. This resulted in far more deaths than be considered polite and in a team game that relies on moment to moment tactics, this is a big pain. As for the squad though, they do come in useful every now and then. It’s always handy to have the extra firepower at your disposal and a healer is a downright necessity for your success. You can command each member of your team to assist with your mission, making them block doorways to slow the tide of Genestealers from behind, while also getting them to protect certain choke points. 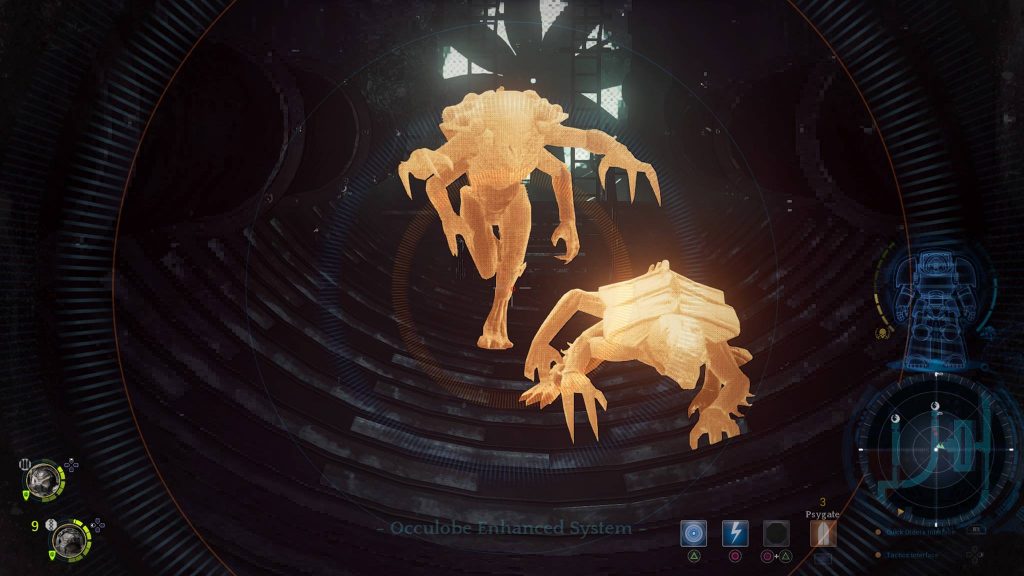 In multiplayer, which allows you to play the entire campaign with up to four people. These additional bodies are where the squad mechanics truly shine. Things become a bit more playable here and having a good team with communication makes the slow slog of Space Hulk a far more bearable experience. This mode also provides you more customisation options for your Marine, with different classes being able to bring either offensive or defensive abilities to the fray while also giving you full reign over the weapon options that you would unlock during a single player campaign. The online mode is definitely the best way to sample Space Hulk: Deathwing as it cuts out the faff from the proceedings, but it is still not without its problems due to random disconnects, screens locking up and the aforementioned play space that is far too small for four people.

Unfortunately, that makes Space Hulk: Deathwing incredibly hard to recommend. The only way I could possible tell anyone that this is worth a purchase is if they were heavily into the subject matter and have three friends that also share this interest. Otherwise, Space Hulk is a more of an exercise in patience than anything that could be considered fun.

Space Hulk: Deathwing
4 Overall
Pros
+ Feels very true to the source material
+ Atmospheric environments when the fighting stops
Cons
- Visually chaotic, making it hard to focus on specific targets
- Incredibly slow and repetitive
- Freezes constantly during gameplay
- Multiplayer disconnects often, despite good connections
Summary
Space Hulk: Deathwing accurately looks and feels like a Warhammer 40k licensed game. Unfortunately, for what it has in atmosphere and looks it just isn’t that great to play. Instead, the game is a slow and laborious slog mixed with laborious combat that rarely feels satisfying.