Snooker games are fairly rare so getting two of them in the same week must be some sort of sign of the apocalypse but here we are reviewing another one having just published our review of Snooker 19.  Where that game had the official World Snooker license and over 100 real pro players in it, Snooker Nation Championship 2019 comes to us without any of those trappings and instead places itself into a niche on PSN as a cheap and cheerful indie arcade effort.

Much like Snooker 19, you are presented with a FIFA style main menu with boxes representing the different options you get from here you can play quick matches, online frames and participate in the Championship.  We started with that and the mode sees you playing a series of qualifying matches before playing through half a dozen tournament matches, with each increasing the number of frames you have to play.

Unlike Snooker 19, there is no career mode.  You just play through the tournament and take your prize money which you can then spend on new customisation options such as table overlay graphics, cues, celebrations and new venues.  As such, it’s fair to say that Snooker Nation isn’t about offering you a ton of depth and that is something that can be seen as a pro and a con depending on the type of snooker game player you are. 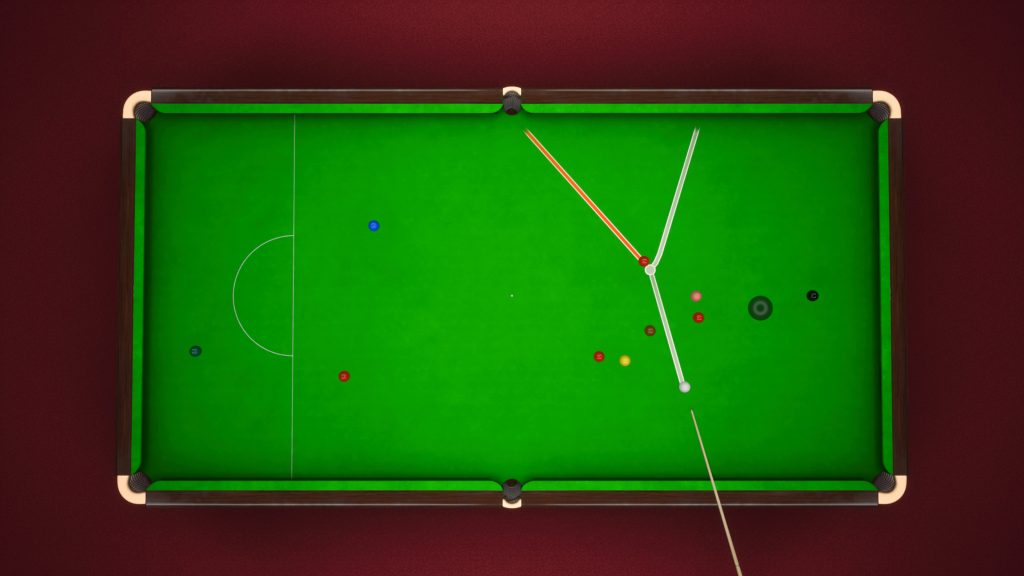 Before we get into that though, how does the action pan out on the table?  Well, this will be a little divisive but the hill we’ve chosen to be buried on is that while we understand that Snooker 19‘s no nonsense approach to snooker is going to play well with the real snooker fans out there, Snooker Nation has options that cater for players of all abilities and has a slightly simpler control system that ultimately makes the game more playable than its higher priced competition.

To take a shot you aim with the left stick,  pull back on the right stick to set your power (optionally you can lock that power in with R1) and then push forward to take the shot.  The d-pad is used to set your spin and that’s pretty much all you need to get going.  Snooker 19 added extra steps to that and they made it feel a little bit fiddly where as here everything is intuitive and simple and if it all seems like too much, just pressing forward on the right stick will take an average power shot which we found ourselves doing fairly often.  You can also skip through the current shot animation by pressing X which really speeds up the action and is a big improvement over the drawn out action of Snooker 19 which only lets you slightly speed up AI shots and offers no speeding up option for your own ones. 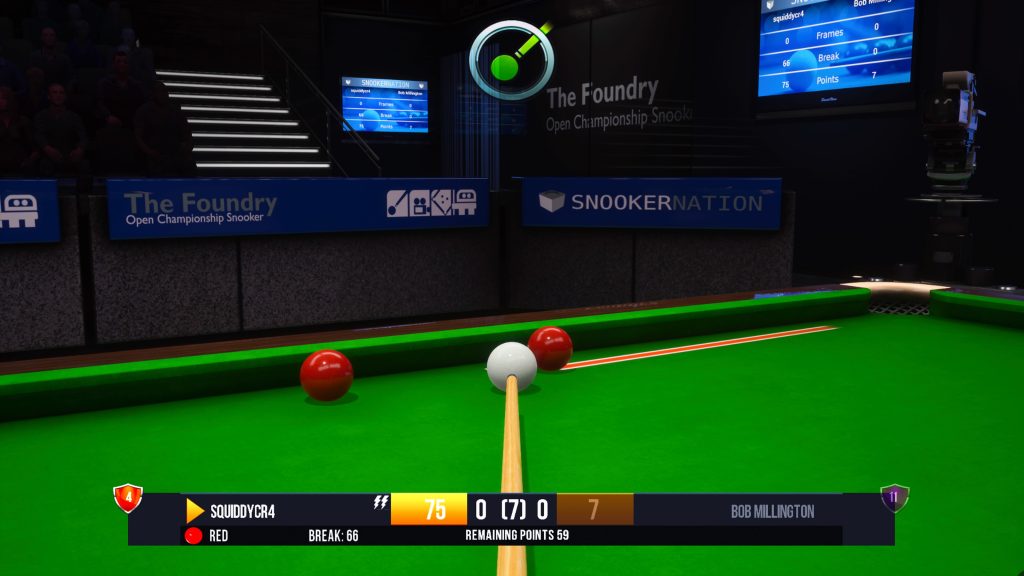 This is definitely the better control system of the two games but it doesn’t stop there as the game also gives you a top down view which while being essential in our opinion is something that Snooker 19 lacks and you have a good range of aiming aids going from a generous extended view which makes building large breaks a lot easier to a ‘no help at all’ champion option or even one where you can turn it off altogether.

On the extended setting we were able to pull out a 147 break and this will irk some of those Snooker 19 fans who are against the idea of any such help being offered in that game but what does it matter?  If you want a challenge or want to feel like an elite snooker player, pick the option that suits you.  Snooker 19 doesn’t offer as much aiming assistance and so break building is a lot tougher in that game but we’d rather have the option instead of the game pandering to a few elitist snobs who are afraid they’ll lose their bragging rights and would rather you just “git gud” or whatever.

The AI here ranges from ‘me in real life’ to ‘absolute dominator’ levels with everything in between but online play is also catered for and worked perfectly well in our sessions.  You can play for in-game money too which makes things a bit more interesting.  We had no issues at all but we only played with friends.  That said, we were pleased to see that there were no match timers in this game which is something that does harm the other game. 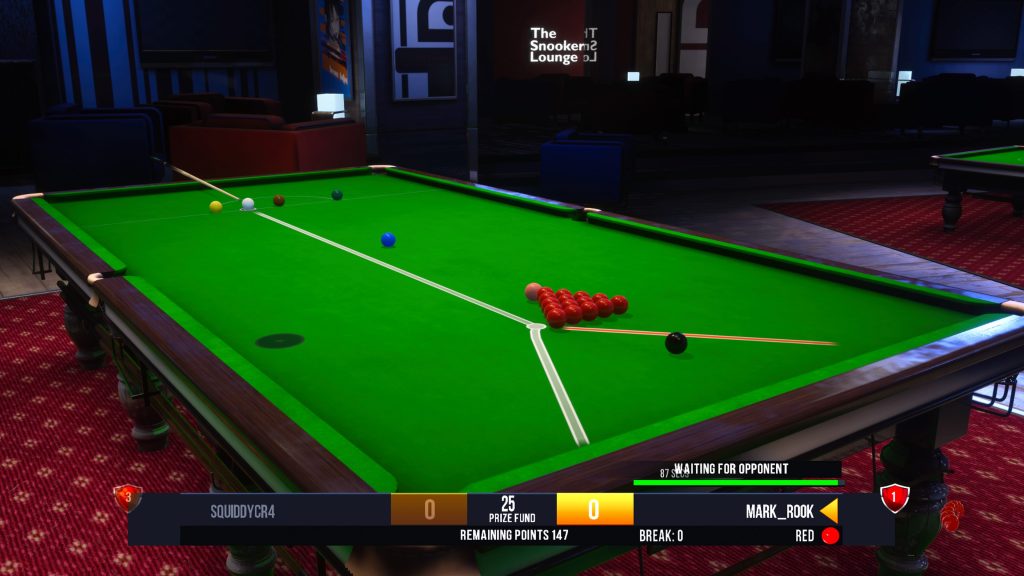 While Snooker 19 may well be the hardcore option, Snooker Nation is more fun.  And yes, it does lack a few of those other features too but again, it’ll depend on your own sensibilities if you think this is a problem.  For example, Snooker Nation doesn’t have licensed players and indeed you can’t even see the player you are against as this game just has floating cues rather than motion captured Ronnie O’Sullivans but in Snooker 19 the AI players had none of the traits of their real-life counterparts, so what does it matter?  Likewise this game doesn’t have a full commentary but rather just a very loud referee occasionally telling you the value of your current break but we’d rather that than a commentary that doesn’t add any colour and constantly gets things wrong.

Most importantly, Snooker 19 offers you all of the tournaments and venues and while that is to be commended, once you’re playing, you don’t notice the venue and we’d rather pick up and play a quick tournament than slog through twelve months’ worth of near identical tournaments anyway.  But if you’re a die hard fan of a snooker in real life, then you may want all of those trappings and that is fair enough.

Not everything about Snooker Nation is perfect though.  Aside from some glitched trophies (that will apparently be fixed in the next patch) there are questions over the game’s longevity. You earn money for winning matches and that’s great but the items you can buy are often pointless such as the table decals that are all worse than the default plain green that you’d expect of a snooker table or they are too expensive.  New celebrations and venues require you to win the game’s tournament several times if you want to afford to buy them.  The balance on that is all wrong. 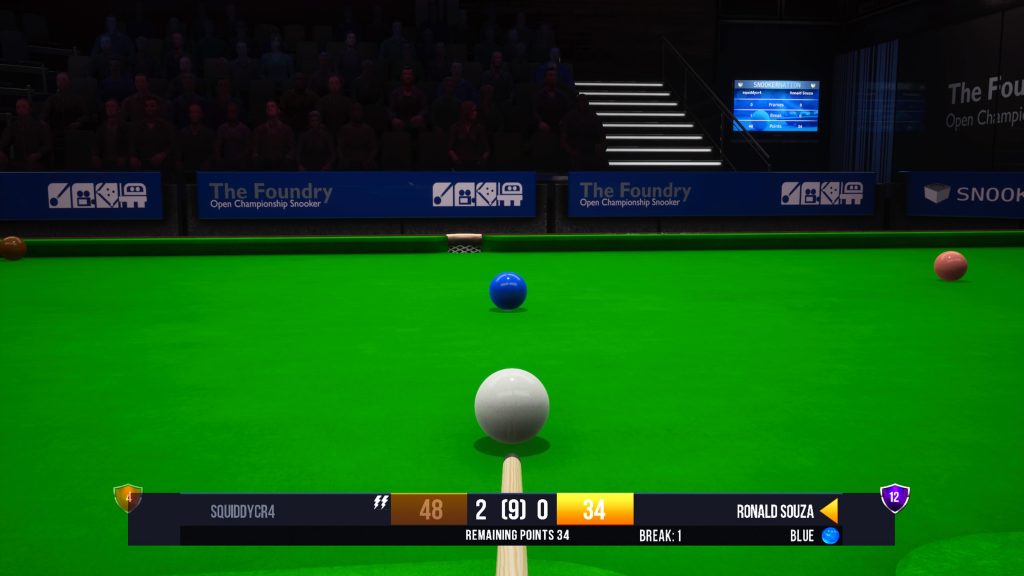 Visually… it’s snooker.  It’s exactly what you’d expect.  Both this and Snooker 19 put my TV into HDR mode and the visuals are sharp on both games.  This one has the better animation though with none of the ball judder of the other game and the colours pop just a little more on this version thanks to the game environments being a little brighter.  As we said before, you don’t get to see the players but this isn’t a huge deal, especially as they don’t look great in the licensed game anyway.

We get it though.  If you’re currently sat there watching the World Championship on TV and are a huge fan of the sport and its personalities, you may want to go for the other game.  If you want a slightly more hardcore experience by default (this game is plenty difficult if you set it to a harder aiming system and pick a harder AI to play) then the same applies.  But if you want a fun, playable snooker game that just gets on with it and has excellent controls for a quarter of the price then this is your better option and is definitely the one that’ll be staying on our hard drives for longer.

Snooker Nation Championship 2019
8 Overall
Pros
+ Excellent controls
+ Accurate physics
+ Smart AI
+ Great range of difficulty settings
+ Good online play
Cons
- Lacks the official trappings
- In-game unlocks are badly priced and mostly rubbish
- Has some early trophy glitches
Summary
As the cheaper of the two recent snooker titles released on the PS4, Snooker Nation may lack all of the official licensing and real life venues and players of its main competitor but if you want a really playable snooker game with great controls and none of the fuss, this is the one to go for.