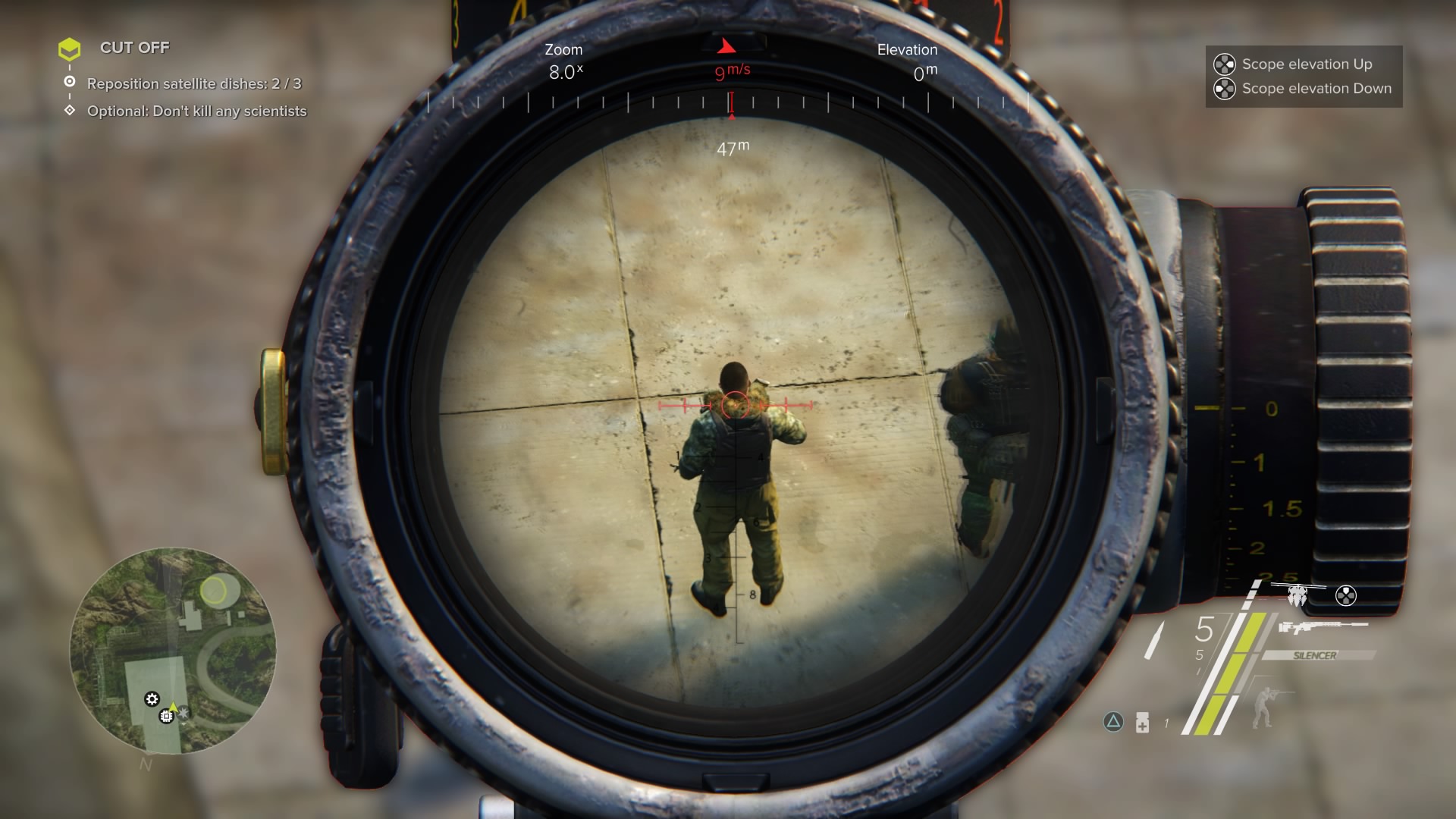 When it comes to first person shooters, I’ve never really put the time in to get good at the fast ones.  Instinctively I aim for the chest for some reason and getting decimated by bionic thumbs with 12 year old American kids attached gets old pretty fast.  The game I was best at was Ghost Recon: Advanced Warfighter and its brilliant sequel and I played those exclusively as a sniper.  When you play an FPS like that, you’re forever staring through a scope, waiting for a pixel to move in the furthest reaches of the draw distance.

For the most part, Sniper: Ghost Warrior 3 is that kind of game.  And it is a game that does a mixture of good and bad things.   In the end your fondest for creeping through long grass and silently taking out enemies is going to decide how many of those bad things you can tolerate. 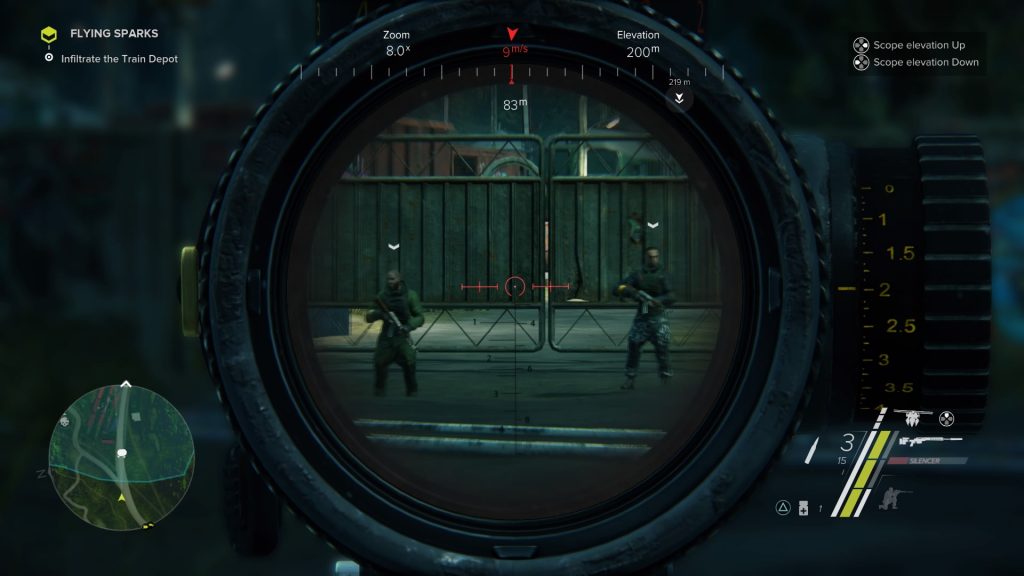 At it’s heart, Ghost Warrior 3 is an open-world shooter.  As with all open-world shooters (Wildlands, Far Cry, Just Cause etc) you are put in the middle of a massive country that you’d never want to live in.   Set in Georgia you are tasked with destabilising the local separatists which, much like Wildlands, involves working your way up their hierarchy and putting bullets in their decision-makers.  All the while working on your personal mission of finding your brother, another sniper who was kidnapped a couple of years earlier.

That’s one of the bad things.  Aren’t you bored of open-world games set in the middle of nowhere?  And in Ghost Warrior 3, it’s a beautifully rendered shell of a world.  Driving down the roads, you won’t see people or cars for ages.  The world is essentially a giant loading screen that exists between missions.  Oh and while we’re on the subject of loading.  I’ve genuinely had ZX Spectrum games that load faster than this one.  Expect to spend the thick end of four minutes in the game’s opening loading screen.  It’s awful.

However, the open-world is about as important as it is fleshed out.  You can generally fast travel to somewhere near your next assignment or at least to a car that you can drive there, and unless you want to explore for the sake of it (or for the numerous collectible-related trophies), there’s no real reason to treat this game like an open-world one. 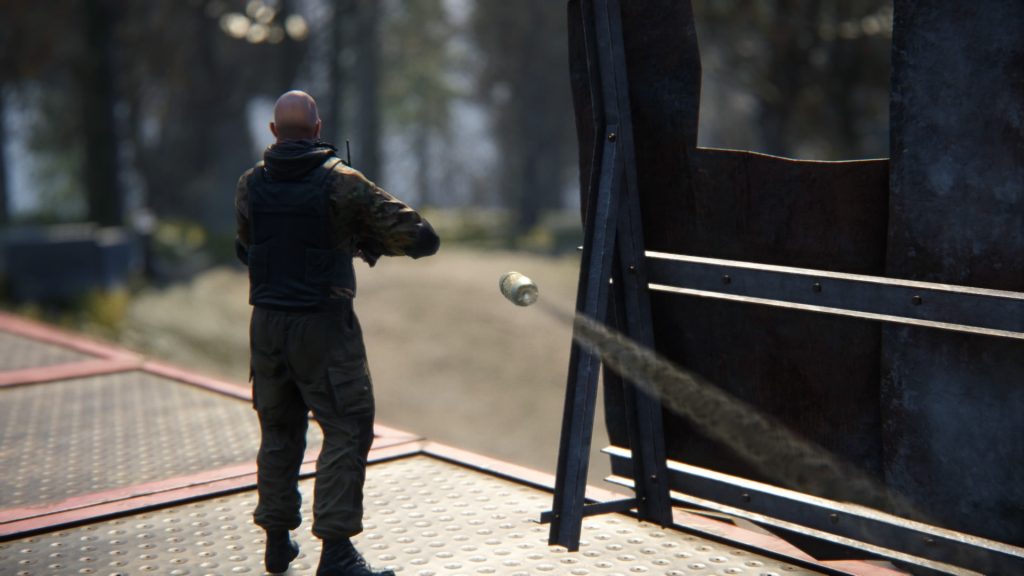 For me, I’ve just been going from story mission to story mission and that’s the way to play this as those missions are good.  Each assignment is initially very tricky with enemies placed in ways where you can’t really pick them off from a distance all the time.  Failure after failure will help you form your tactics and it is actually very satisfying when you finish a mission.  Also, the game’s XP system lets you earn points in three trees depending on how you kill people.

If you shoot someone from distance, your Sniper XP goes up allowing you to unlock skills that will help you with your ranged killing.  Ghost goes up if you sneak up and silently take folk down while Warrior is for killing folk with your assault rifle.  Admittedly the skills you unlock aren’t all that exciting, but its nice that the game doesn’t punish you for not rigidly sticking to one play style.

The taut nature of the story missions is what makes this game good.  Even if the story is relatively generic (although the personal angle keeps it relatively interesting), the missions work particularly well.  There’s a freedom to their execution.

It’s not all good news.  The inconsistent AI is capable of spotting you from hundreds of meters away and yet inexplicably won’t notice you when you are stood in front of them and the game takes a leaf out of Far Cry 2‘s book by making everything a bit too realistic.  Sure, we don’t expect – or even want – to be able to shoot someone at 300 meters and expect a perfect headshot every time, the game does account for things like bullet drop, but the need to keep repairing our silencers is a chore (as is actually working out how to do it in the game’s stupidly complex menus) and all the crafting options and gun modifications just feel like busy work.  I’ve unlocked several sniper rifles but found myself sticking with my first one because the middle bit of the scope is red and a bit more visible for me. 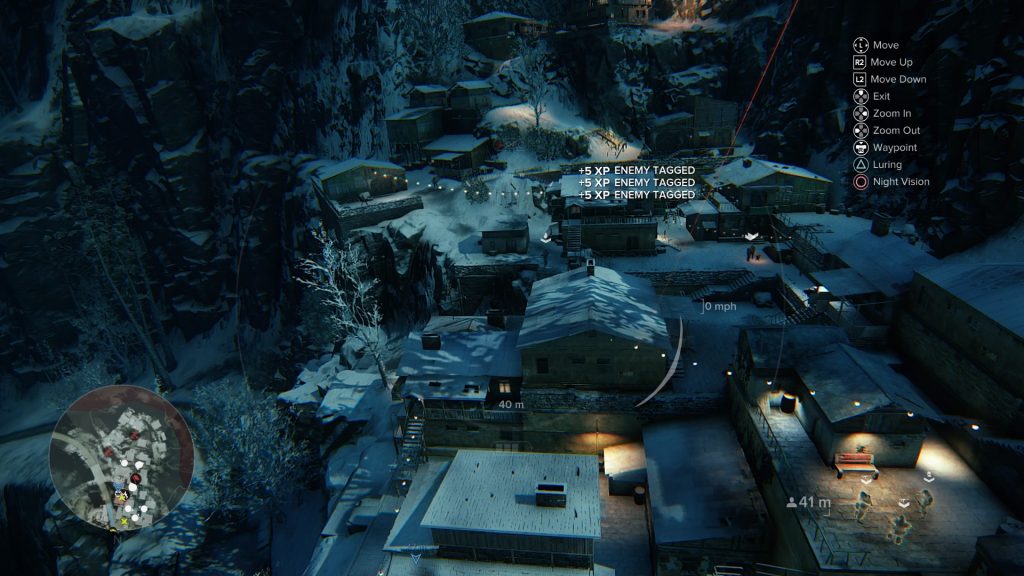 You do get used to it but it makes Ghost Warrior 3 feel a lot less immediate than it should be.  I’m not asking for Call of Duty simplicity but I don’t want all the options the game gives me and because there are so many of them, the sheer amount of controls to learn is horrific.  It took me far too long to figure out how to pull out my pistol and don’t even ask me about switching ammo types.

However, with all that said, I’m enjoying the game a lot.  Purely on the strength of the story missions.  The reasons to go away from those are lacking and so to me this is just a straight forward sniper mission game with some mostly avoidable tat shoved in to help the game fit in with its contemporaries.  I’d like it even more if the loading didn’t suck and the game didn’t crash quite as often.  I’d like enemy marking to be more pronounced and reliable, I’d like the world to feel more alive and I’d prefer it if I did more killing and less travelling but at least the game isn’t asking me to take part in races or stuff like that. 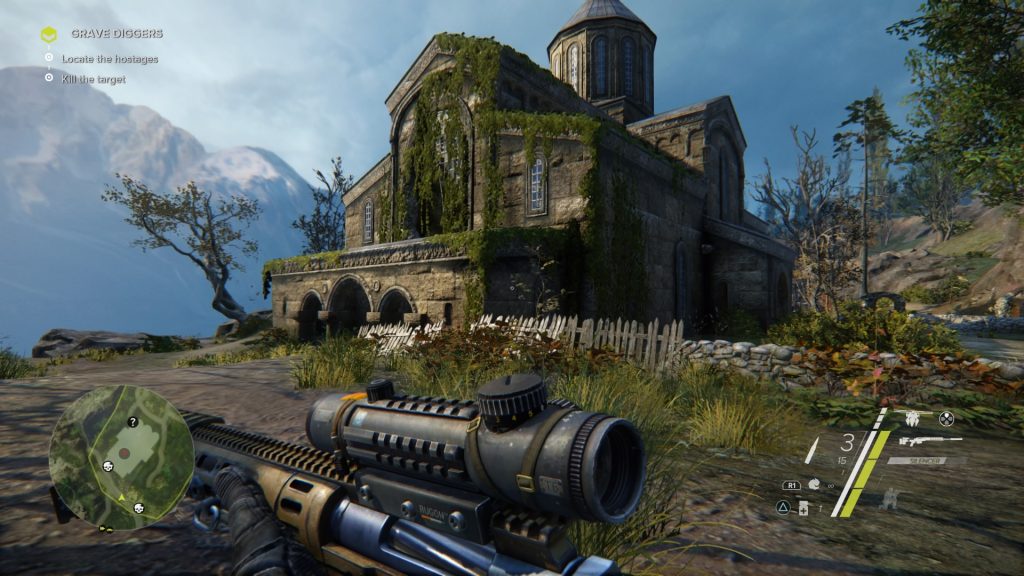 Looking elsewhere, we’re probably at the more generous end of the reviews for the game and that’s down to me and my fondness for sniping and tactical gameplay.  There’s a really good chance you’ll find the game lacking compared to games that let you do it all like Wildlands but Sniper: Ghost Warrior 3 puts the sniping first and while I miss the x-ray kill cams of Sniper Elite (this does highlight your best headshots but it’s a tad underwhelming) and it can get frustrating missing an enemy by a few pixels because of pesky physics, this is keeping me interested in a way that many other shooters never could.

Although the game has a penchant for terrible music that wouldn’t sound out of place on Eurovision.  So yeah… that.

Sniper: Ghost Warrior 3
7 Overall
Pros
+ Really tricky and satisfying story missions
+ Accomodates different play styles
+ Lots of upgrade and crafting options (if you like that sort of thing)
+ High-quality visuals
Cons
- Another bland open-world with no real life to it
- Too many options and controls to deal with
- Terrible loading times
- A bit crash-happy
Summary
Sniper: Ghost Warrior 3 is a bit of a mess technically, and the open-world aspects aren't fleshed out or particularly necessary but, and it's a big but, if you can get past that, there's a satisfying and tactical shooter here that sniping fans can really enjoy.