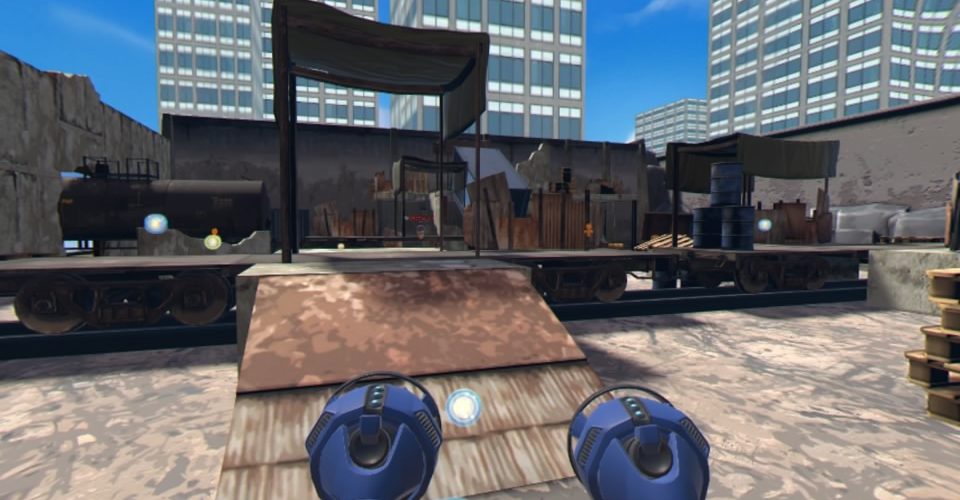 Some games are so minimalist and designed for a single purpose that reviewing them becomes quite difficult.  You try pulling out a thousand words on Tetris and see how far you get.  In a way, Smashbox Arena is one of those games as it gives you one thing.  3v3 arena battles and nothing else.  It puts you in small arenas with a little bit of cover and some verticality and lets you get on with it.  A PSVR headset is required as are two Move controllers.

The game offers a training mode, a campaign and then your online mode.  These are all accessed by a weird sort of train station kind of interface which slows you down a little but does give you a very early glimpse of what the controls offer. 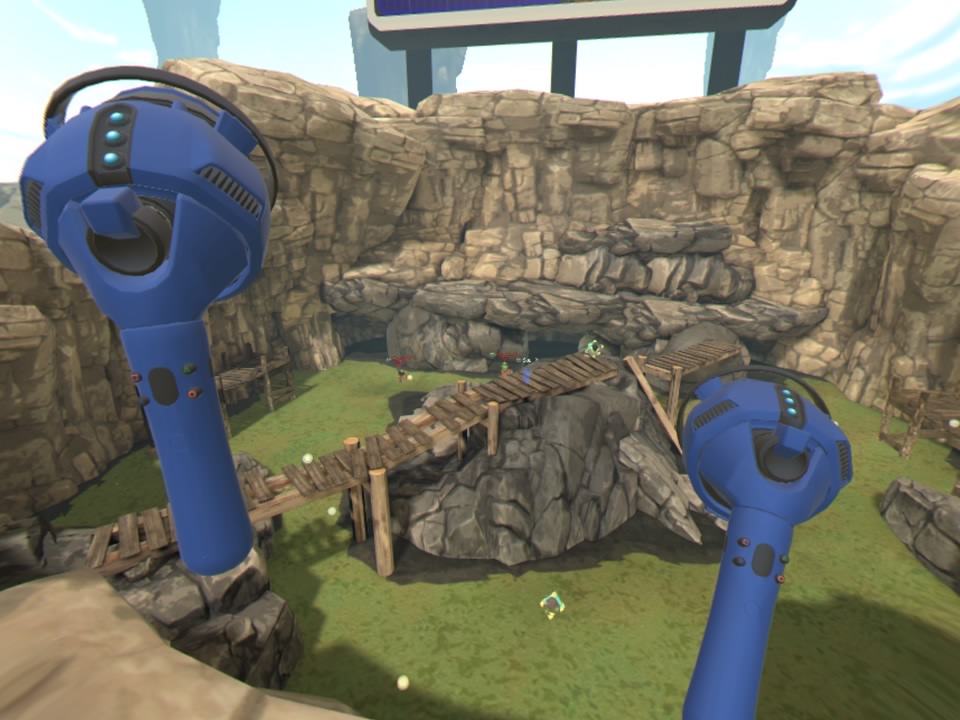 The way the game works is that you are put into an arena and your team have to destroy the opposition in a weird mix of Unreal Tournament meets dodgeball.   At the start of each round, balls fall from the sky and litter the ground.  Your in-game character has two guns, one in each hand, and these are mapped to your Move controllers.   The L2 and R2 triggers are used to attract balls which can then be fired at your opponents.  The can also deflect incoming shots, usually via luck rather than skill.

L1 and R1 fire off teleporters which are used to move around the levels.  It’s a clunky system that presents lots of problems but is a necessary evil that comes from trying to do a Move-controlled game that isn’t on rails.  You can press the X button on each controller to turn in 45 degree angles but if you’re trying this in the heat of battle, you’re already dead. 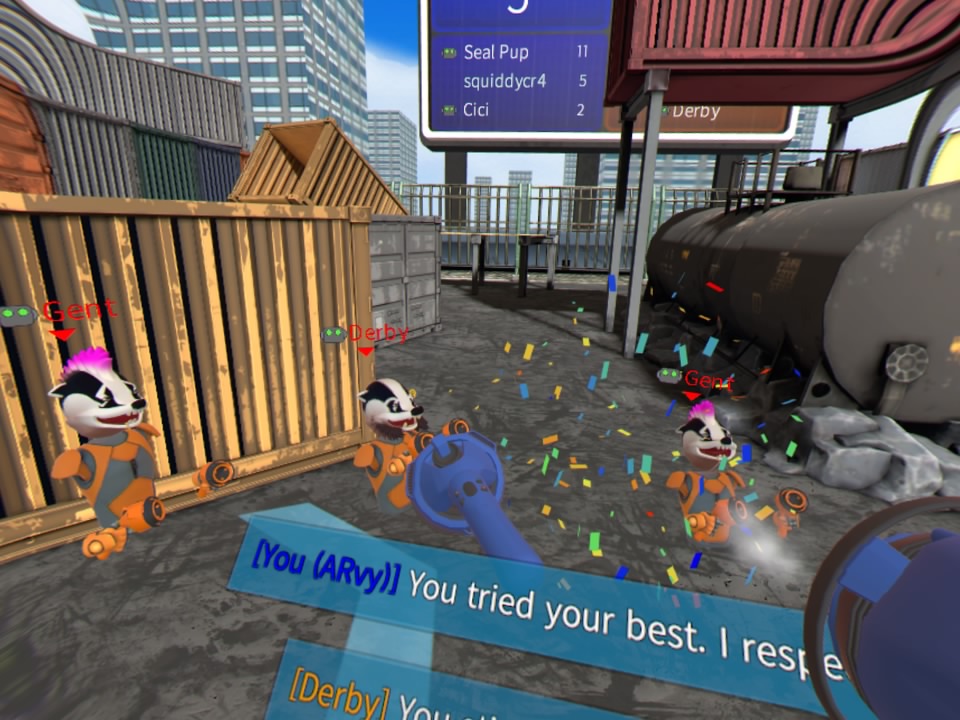 The online mode is populated by humans and however many bots are required to fill in.  The teams are always 3v3 and the arenas are all pretty small  (although there are a few of them) and the online story mode is only the same thing but fully populated by bots and punctuated by the most throwaway plot ever.  On harder difficulties, you’ll get mauled and your bots will let you down 100% of the time.

Adding to the list of complaints, the visuals are pretty dire.  Basic character models and environments mean that this game looks incredibly ordinary even by current first generation PSVR standards although the headset is at least useful in locating threats (even if the controls don’t help you respond them efficiently). 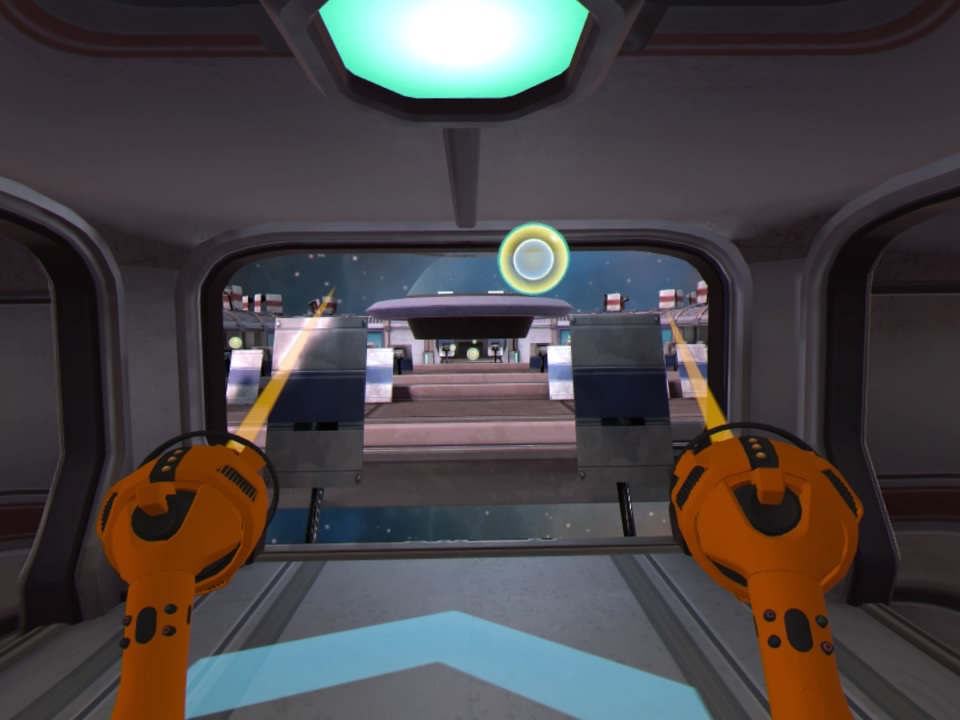 Now with all that said, the battles are short and fierce.  When you do well, you do feel rather empowered by the whole thing and the shooting (which is quite heavily affected by gravity) can be satisfying when you land a peach of a shot on someone.  In-game pick ups offer some interesting weapons including a great sniper rifle which lets you look down the sites in the same way that delighted us in Arizona Sunshine.   Because you can only teleport if you have a free hand, there is some strategy when it comes to deciding if you want the means to move or the means to defend yourself.

In the end, Smashbox Arena is just too simple to be compelling though.  Finding players to play against can be tricky anyway but the unappealing visuals and clumsy lobby system make you want to exit the game anyway but stick with it and you’ll have some enjoyable matches on here.  But there are better VR experiences to spend your PSN credit on for sure.

Smashbox Arena
5 Overall
Pros
+ Battles can be fast and furious
+ Good shots feel particularly rewarding
Cons
- Very short-lived
- Not many competitors out there in the lobbies
- Poor visually
- Controls are too compromising
Summary
Smashbox Arena is one of those games that wouldn't really be acceptable outside of the VR market and the PSVR headset doesn't really add enough to make it worthwhile but it also has moments where the battles are exciting enough to keep you interested.