Sisters Royale is a vertically-scrolling shoot ’em up in the classic arcade style and it comes from Japanese coders Alfa System, their first shoot ’em up since 2005’s Castle of Shikigami 3.  That means you can be sure of two things.  Firstly, it’s going to be a pretty competent shoot ’em up and, secondly, it’s Japanese and you’re going to know that right away.

For a shoot ’em up, Sisters Royale has a bit more plot than usual.  It is set in the land of Pultima where five sisters are meant to defeat Seytan as part of a prophecy.  However, years pass and they don’t fulfill this destiny because they all hate each other.  Unable to work together, the sisters part ways but then years later they gather together.

Unfortunately for the citizens of Pultima, the girls still hate each other and are in fact only there to fight over a man, Lord Yashin.  And so, what we get is a five stage shoot ’em up where each girl is your playable character and the rest of them are bosses.  The plot continues as text passages before and after boss battles and you’ll be tempted to skip them after a while (although suffer them once as there is a trophy for watching them all). 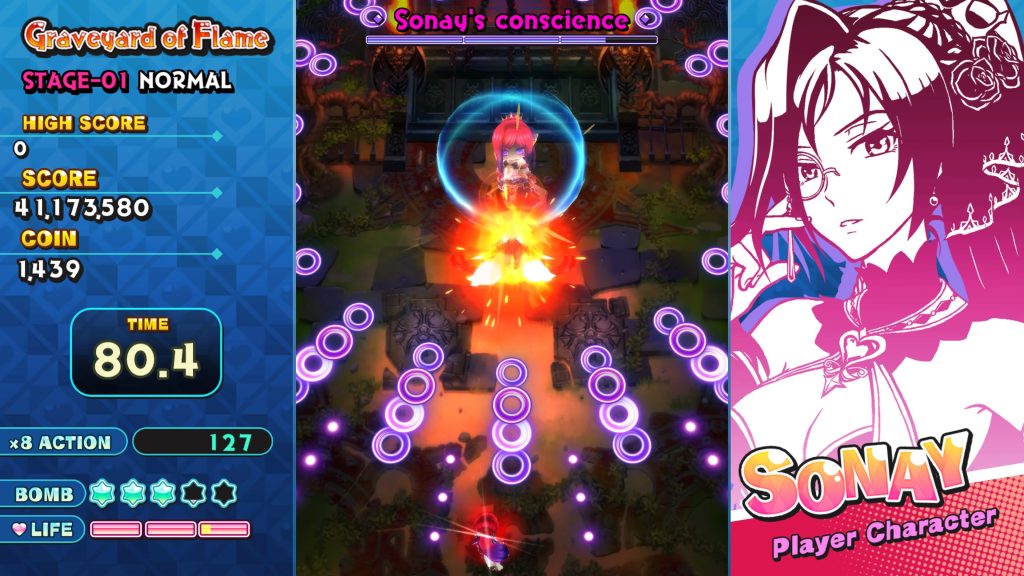 Once you get into the game you get to pick a sister to play as, including Ode if you have the DLC.  Each character has a different basic shot (mapped to

).  You also have a standard smart bomb as well.  Sisters Royale is very much a typical vertically-scrolling shoot ’em up in that respect and is very much in the Japanese style, with controls and gameplay that feel like the classic Cave shooters such as Donpachi and Espgaluda.

The game has five stages where you’ll take on a horde of smaller enemies with each level punctuated by a mid-level boss (which is always a floating cube) and then the end level boss.  Each stage feels fairly similar although there will be some interesting details or gameplay quirks to mix things up.  For example, level two has slippery patches of ice that mess with your movement while stage four is in a barely-lit cave but, for the most part, you’ll mainly just be shooting everything you see. 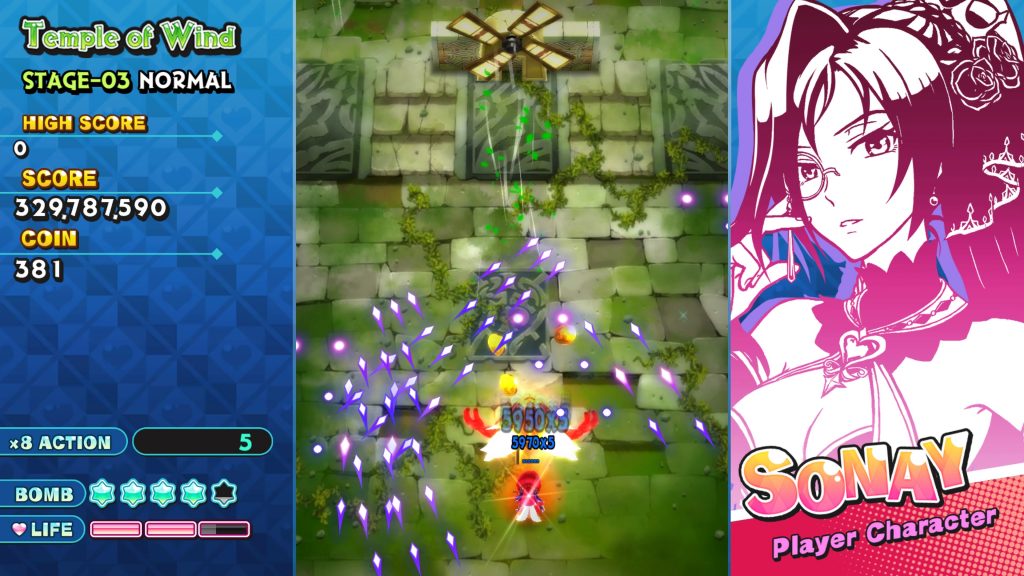 Like any good shoot ’em up, Sisters Royale does have some more subtle game mechanics.  For example, if you buzz near to an enemy, or their bullets, your main weapon will be temporarily buffed for a second.  Also, there is a combo system in play if you want to go for big scores.  That said, there are no leaderboards – either online or off – and that’s a real oversight for a game like this.

It’s nothing you haven’t seen before, especially if you’re a fan of the genre, but everything here done to a particular standard.  The fact that they’ve put time into the plot and scoring mechanics is admirable and gives the game a feeling of being a bit more premium than the usual indie efforts that we’re used to reviewing.  And at just under £12, that’s nice to see.

Despite having all the right shoot ’em up credentials, Sisters Royale is surprisingly relaxed about difficulty.  Don’t get us wrong, this is a challenging game with plenty of enemies and even more bullets to get through but Alfa System do give you infinite continues right from the off and a choice of three difficulty levels that feel significantly different.  Also, your summoned ‘familiar’ secondary attacks can make large parts of the game fairly trivial on lower difficulties.  To temper this there are at least ten trophies that you’re never going to unlock unless you put a lot a lot of time into mastering the game and even then time alone might not be enough. 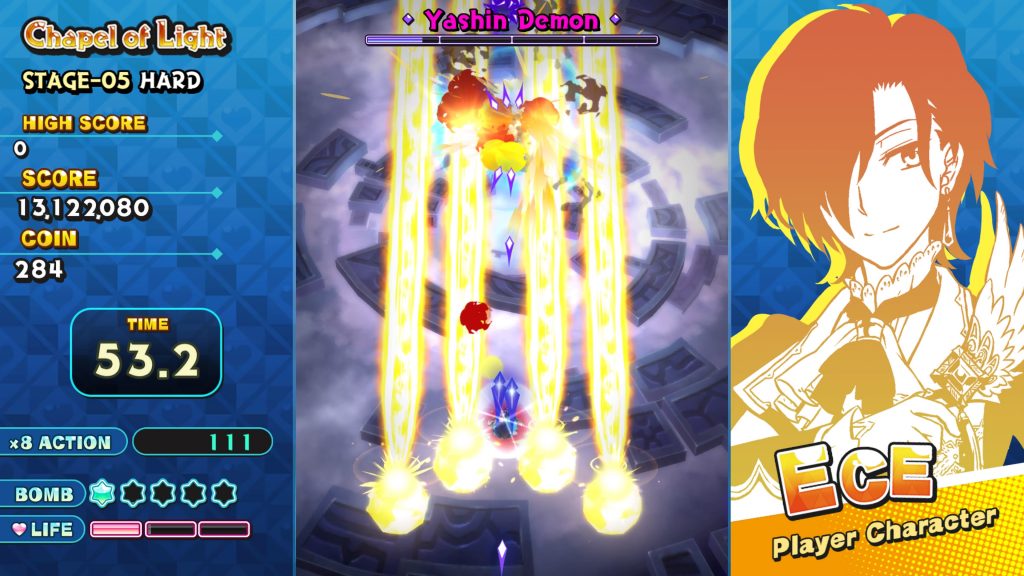 In terms of presentation, Sisters Royale, does not disappoint.  Fans of anime will enjoy the character art (although, as expected, the sisters are all dressed like historical prostitutes or something) but the main thing is that the graphics in play are clear and easy to interpret.  The backdrops are quite plain and there are no big, elaborate bosses to gawp at but you can always see what is going on and that matters.  The visual style is smooth, rather than being another hackneyed attempt at pixel art.  The only downside is that your character’s hitbox isn’t shown, so precision dodging is a little harder to judge.

The sound is actually pretty good too with lots of different pieces of music and reasonably dynamic in-game sound effects.  There’s no voice acting but that might be a mercy to be honest.

So, overall, this is a strong entry into the PSN shoot ’em up market and one that gets a lot of things right.  The lack of leaderboards does mean that pretty much you’ll only be interested in the trophies and some of those look borderline impossible which is a shame as ultimately it all takes a little bit of shine away from an otherwise very good game but if you’re a fan of the genre this is very easy to recommend.

Sisters Royale
7 Overall
Pros
+ Solid shoot 'em up gameplay
+ Very playable
+ Good variations in weapons
+ Varied difficulty choices
+ Well-presented
Cons
- No leaderboards
- Might be too short for some
Summary
Sisters Royale is a fine shoot 'em up that gets a lot right and is just a few decisions away from being great. It is easy to recommend for fans of the genre though, especially at this low price.