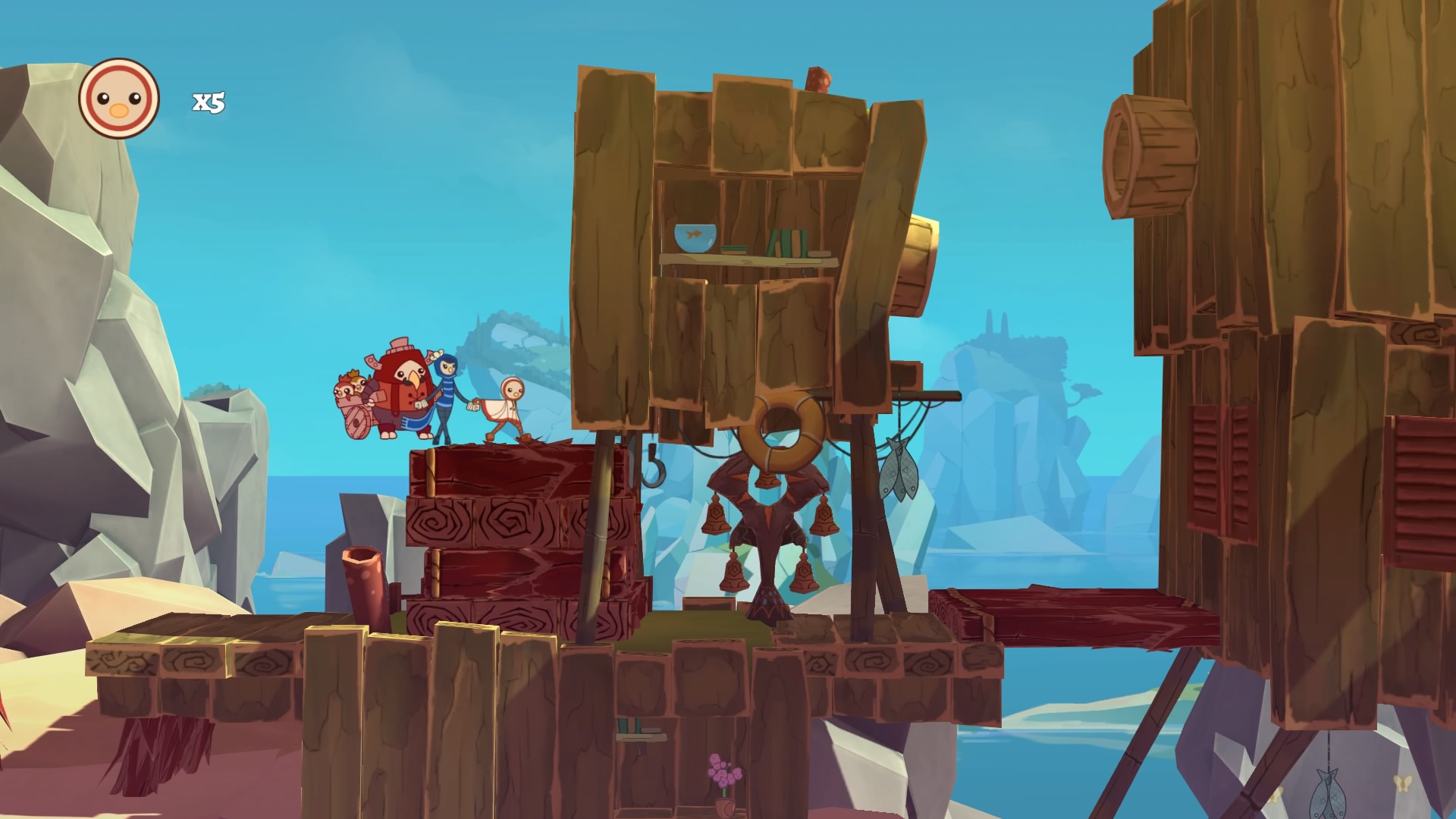 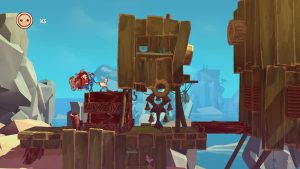 Every year I seem to be lucky enough to happen upon a game that subverts my expectations and becomes my own personal sleeper hit of the year. While the title may not gain attention in a widespread manner, it will surprise me with just how good it is and how easily it could have slipped under the radar. In 2016, as it stands, that title is the wonderful platformer, Shu.

is a charming tale of a world threatened by a violent and ancient evil that takes on the form of a malevolent and vicious storm. As the character Shu, you will watch as your home is devastated by this evil in the opening credits, before taking on the task of rounding up all the scattered villagers and making haste to the one weapon that can thwart this menace. The opening credits and ending scenes are told via pictures that bring Shu’s world to life and even without speech, the audio and visual masterclass delights at every step.

While the story is not an original one, the game doesn’t spend too long dwelling on the who or the how and instead focuses on the gameplay, which does it a credit. More of the backstory and overall motivations can be found via one (of the many) collectables. The only problem is that I was left wanting a little more story and found myself drifting through the game without a clue as to where I was headed or why. I made my own observations and drew my own conclusions as to what was happening. I can’t really criticise the form of story-telling – I don’t feel it took away anything from the game but because I wanted a bit more, I found myself replaying levels in order to find more of the story. If that’s your thing, great but if it isn’t you might find yourself wandering what everyone is motivated by.

So, Shu relies on its gameplay which thankfully is one of its biggest strengths. The levels are linear affairs, seeing you traverse to the levels to get to the end and progress the story. As you progress you’ll mainly rely on your ability to glide across open chasms and between different platforms. Air currents and wind flows, also let you propel yourself around and onto different things. There are five areas, containing and a total of fifteen levels – any concerns that this might be a little content light will be addressed soon.

As you progress through these levels, you’ll meet different folk who have different abilities. Some will allow you to slow down time, others will allow you to walk on water and so on and so forth. These abilities allow you to beat the games puzzles and get past obstacles. The thing that separates this from other platformers is that at the end of each area, your new found friends get air-lifted to safety and you’ll march on alone. It’s refreshing to not get to the end of the game and be carting around ten different folk because it would just seem daft and difficult to manage. Instead, your options are more straightforward and you know that any puzzles are going to focus on one of three abilities or some combination of them. 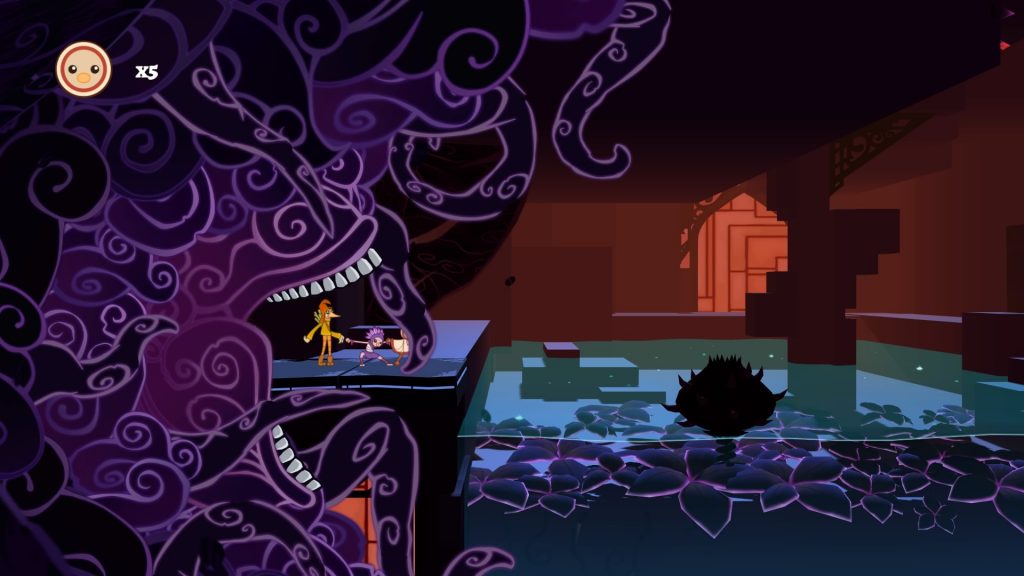 There aren’t enemies to speak of throughout the game and most of what will kill you will be falling to oblivion or environmental hazards. At first I thought it was strange to not have anything to kill or attack but as the game wore on, I found to appreciate its ease at letting me explore and its difficulty curve as things progressed. Certainly by the later levels, I was thankful for not having a hundred different things to dodge. The levels, being beautifully crafted, don’t feel empty, so a lack of enemies isn’t really an issue and its more in keeping with the story.

However, the one enemy you do face repeatedly is the storm and what a scary bastard he is. Some of the best levels in video gaming have you trying to escape from things (I’m looking at you, Rug Ride from Aladdin and Falling Ship from Dark Forces II). In Shu the storm will appear at certain points in the game and chase you, requiring some lightning fast reactions and quick thinking. These were the areas that I died at the most and seeing as one of the trophies listed is to complete every level without dying, it’s certainly an area that is probably designed to catch you out the most. However, I loved these segments for the general peril and slick combination of graphics and audio.

Even if you do die more often than not, the checkpoint system is certainly more forgiving than other games. Each checkpoint will grant you five lives to be able to get to the next checkpoint at which point your five lives will be refreshed. It’s one hit kills for every hazard though so although it seems overly generous, I used all five on a couple of occasions. Suffice to say, it’s a really nice system and works well. 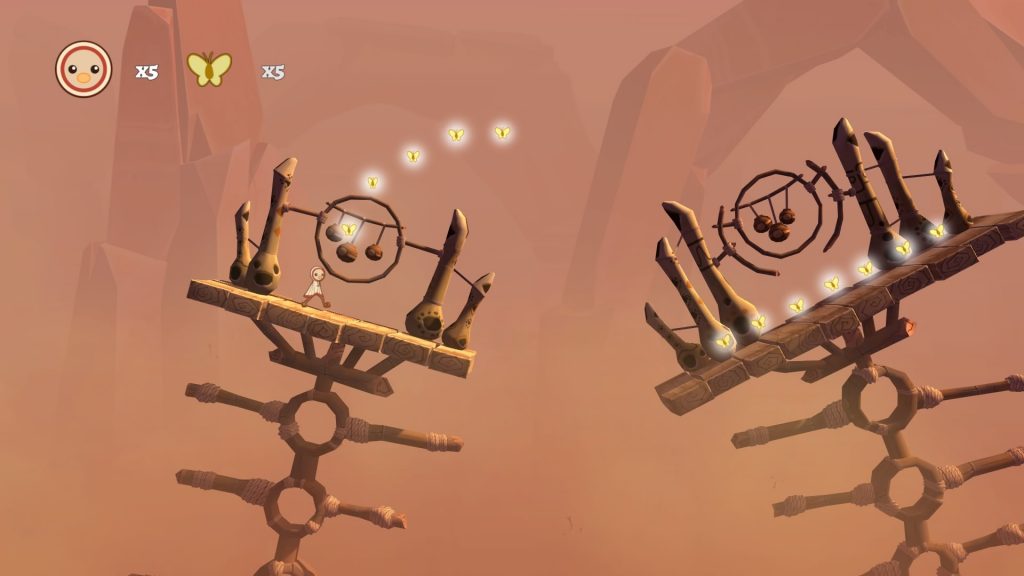 Graphically, Shu looks and feels beautiful. Each area has its own distinct style and although they are tropes we would have seen before in other games, they all have their own personality that transcends the norms of generic areas. The game has lots of small details that bring it to life, whether it be the spikey barnacle hazards that bristle when you get close to them or the way the smashed shards of glass reform after you’ve broken through them. There are so many little nods to a living breathing world that made it a joy to explore. It would have been so easy for the developers to just throw out a generic set list of levels and instead, they’ve given us something that I enjoyed from start to finish. My favourite touch was the fact that the characters held hands while moving through the levels – totally unnecessary but really worthwhile.

The audio was an equal treat and matched the level design well. Again, my favourite segments were during the chase sequences, watching all the graphical destruction as the landscape gets pulled in around you with a haunting soundtrack to match. The music wasn’t as standout as the graphics but I enjoyed it none the less and given that audio tastes differ heavily from person to person, overall it was a positive here. 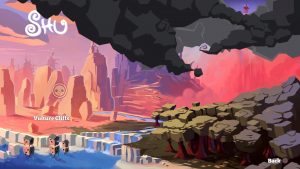 Previously I mentioned Shu’s seemingly smaller level count and that whilst it did seem short to me, I would say there is a solid ten-hour quest there, if you just blindly rush through it. There are time trial modes, dozens of collectables and the ability to attempt ‘no death runs’ on each level. If total completion is your goal, Shu has you covered and to be honest, the game was fun enough that I’d play through it again anyway. If you weren’t as taken with it however, there isn’t anything to do after you complete the adventure.

Shu
8 Overall
Pros
+ Lovely story with imaginative character design + Excellent gameplay + Wonderful graphics and audio + Plenty of replay value, should the mood take you
Cons
- A little more story that doesn’t rely on collectables - Might be a little easy and short for some
Summary
Shu is my personal sleeper hit for 2016. I had no idea it had even been made but it charmed me with its look and hooked me with its gameplay. As someone who loves a challenge, it certainly provided the odd twist and turn but it was probably the most relaxed and fun ten hours I’ve had with a game in recent memory. It’s just so darned charming that it’s hard to really find fault, which isn’t to say that it is perfect but more to say that it is a fantastic game, that I had plenty of fun with, and I can’t wait to see what developer Coatsink produces next.