Shape of the World is a difficult game to review given its meditative qualities. On the one hand, it sets out to do exactly what the developer Stu Maxwell (AKA Hollow Tree Games) had in mind. That is to evoke his local park in videogame form and the relaxing qualities this depiction brings with it. On the other hand, if we are to judge it by normal game standards, it falls a bit short. To begin with, our first playthrough took just south of ninety minutes. But to mark down Shape of the World for reasons of longevity alone would be churlish on our part.

You start in a valley on an almost white landscape and make your way up to the top of a mountain by way of several  visually distinct areas. Initially you’ll be reminded of Rez, specifically the opening half of Area 5 where you emerge from the primordial soup and like Tetsuya Mizuguchi’s masterpiece, you’ll find yourself in a state of relaxation. Unlike the Dreamcast/PS2 classic and subsequent re-releases, you dictate the pace of your journey through this procedurally generated landscape based on Vancouver’s Stanley Park.  Your only real guide to progressing is an arrow (a stylised A from the game’s logo in fact) showing up  from time to time that helps you on your way. 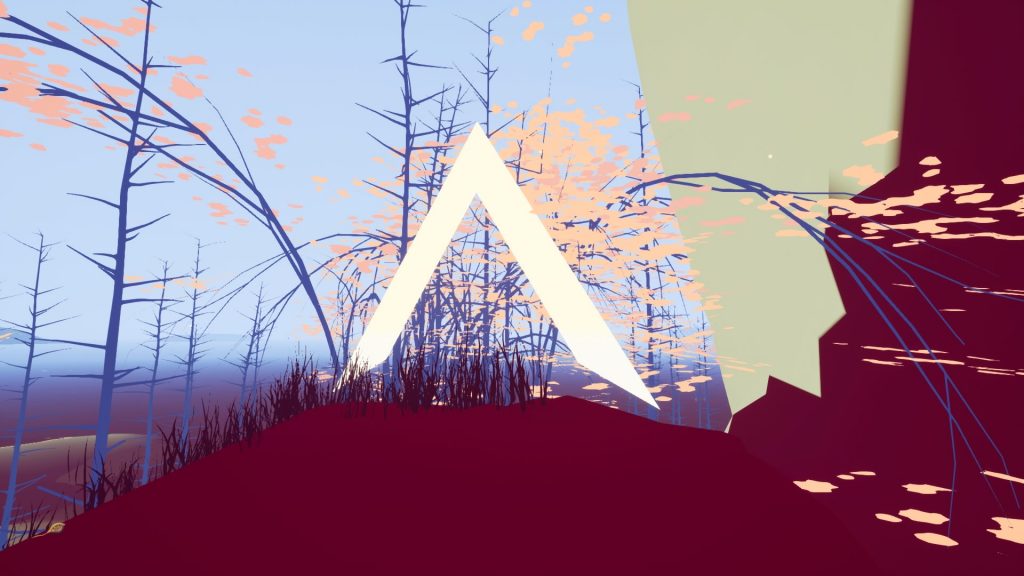 Interaction with the environment is limited to planting trees, destroying trees or interacting with other objects you’ll find throughout your journey. The objects are fairly limited in scope being limited to the analogues of tree trunks and monuments. Less frequently you’ll be able to interact with the fauna too. Early on the tree trunks come in sets of three or four and you’ll need to interact with them all to open a path to the next area. The path you create typically lifts you up to higher areas and your next arrow.

When you pass through or under one of the aforementioned arrows typically you’ll trigger a palette and scenery shift, not unlike a layer change in Rez. These transitions are typically very easy on the eye, almost a postcard of what to expect until the next scenery change. Shape of the World is rarely dull looking and often beautiful. Given the inspiration in nature, the view is often dominated by foliage, usually including trees and ponds of some description. This combined with the atmospheric music by composer Brent Silk makes for a dreamlike landscape on more than one occasion. At times he’s channeling the likes of Tangerine Dream and others any number of ambient staples. 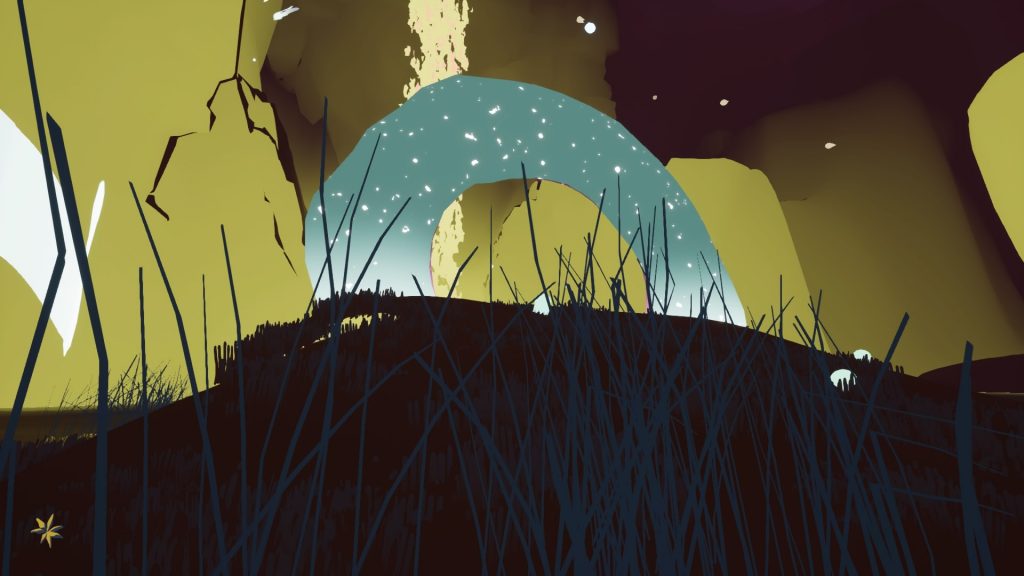 Later on the key to your progress is by way of monuments that effectively let you teleport to their location. You need only have sight of one and you’ll be able to jump to them. These are crucial to progressing in the later game, tied as they also are to trophies for flying for a certain distance.

One videogame trope we could happily do without is collectibles, sadly Shape includes them. There are twenty eight distinct seed types you’ll potentially encounter throughout your various runs (at least three completions required to get a platinum). By the time we had completed one run we’d managed to get eight. Helpfully the game shows which you’ve got on the pause screen, but there’s still the chore of collecting stuff arbitrarily. That said, we expect we’ll have another crack at finishing off if we’ve managed to get most of them by the time we’re done on playthrough three. 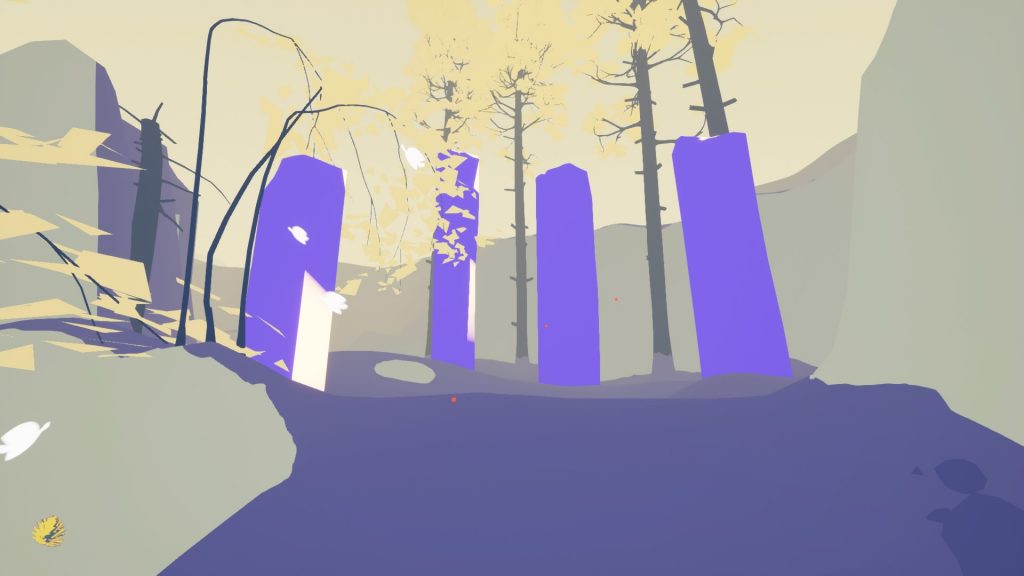 The seeds are instrumental in another mechanic. Once you’ve got a stock of seeds, the game will gently introduce tree planting. Simply tap

and a seed will be thrown with a tree appearing where it lands. You can just as easily tap

to destroy that same tree, the same applying to any tree in the environment. You’ll get a small boost forward in the direction of the tree you just destroyed; we guess it’s analogous to going through undergrowth to move forward. It can be helpful to get yourself out of a tight spot if you get jammed in scenery. Sadly that’s as involved as trees get, it’s a shame the idea isn’t explored further.

In addition there are speed runs to complete for the sake of a trophy; they seem a little at odds with the game as it stands. They feel contradictory to the relaxation aspect certainly as do the collectibles. 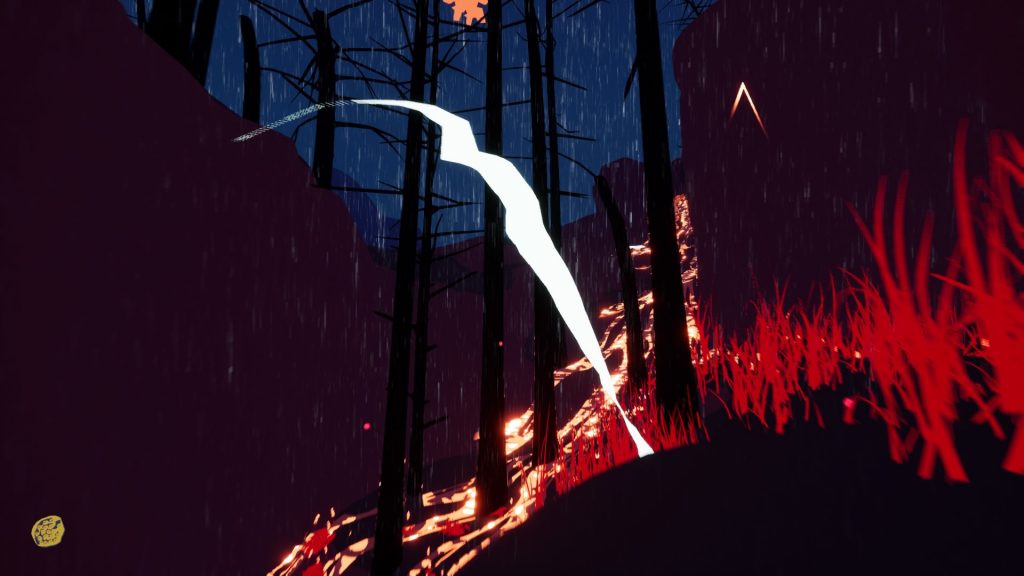 Shape of the World would work well if you put a PSVR headset on, perhaps they’ll implement a patch down the line. Follow up a session with a cup of herbal tea and you’ll be so relaxed you’ll probably be ready to go to bed early.

As we alluded to in our opening paragraph, Shape of the World achieves what the dev set out to do. That is to create a space to relax in and unwind, almost a haven from our busy lives. As a videogame it falls a little short but it gives further credence to the assertion that games can be art. It’s a serene way to spend a few hours, it’s just a shame it can’t quite work out what it wants to be.

Shape of the World
7 Overall
Pros
+ A relaxing way to spend a few hours
+ Beautifully realised procedurally generated landscapes
+ No UI furniture besides the odd tooltip early on in the game
+ Dreamlike quality at times, helped by atmospheric soundtrack
Cons
- A bit of a sparse package
- Something of an identity crisis; game or art?
- Underexploited ideas
- Collectibles are ill fitting as are speed runs
Summary
A wonderfully relaxing way to spend a few hours but falls down a little in terms of game mechanics. Could well be called an interactive art installation.