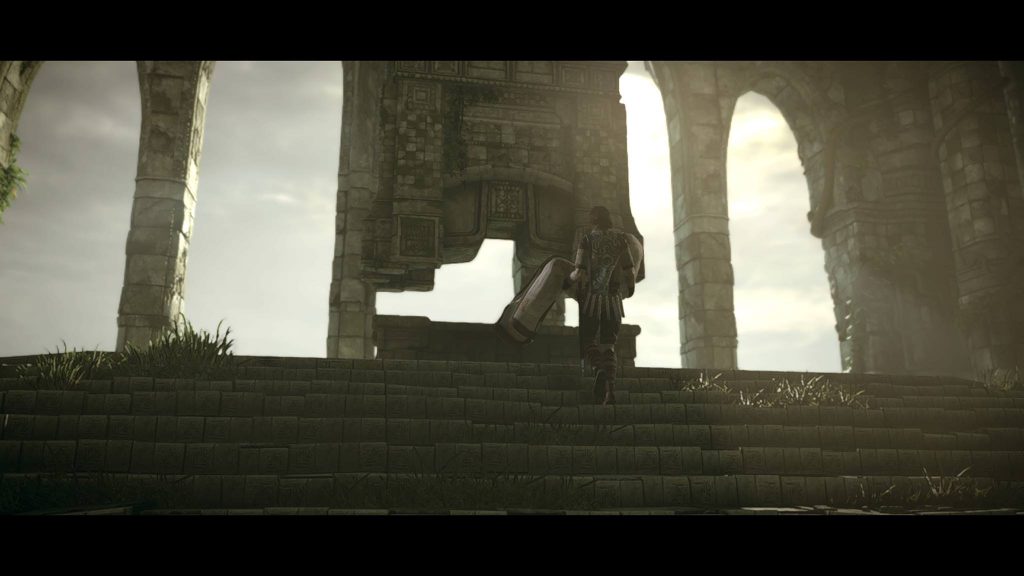 Shadow of the Colossus is and will always be a classic. Originally dropping on the PS2 at the latter end of the console’s lifecycle, it proved that the old dog still had some tricks left in it by providing an experience that was not only artistically sound but also large in scale and ambition. Since then we have already received an initial HD remaster which simply upscaled the experience to work on the PS3 and to introduce more people to the game, but as a simple update, this wasn’t quite enough to sate fans of the franchise.

Bluepoint has the answer however, rather than retread the same old engine and adjust the bloom a bit they have instead opted to retool the game from the ground up and it shows. On the base level of it, just about every aspect of the original game has been improved exponentially. The environments have been given a more realistic and high-fidelity look, while the titular Colossi look far more organic with hair that accurately reacts to their movements and the unwelcome manipulation from Wander. Other enhancements come in the form of performance, the game runs at a full 1080p 30fps on standard PS4’s while the PS4 Pro gives you the option for either 4k 30fps or 1080p 60fps. For sake of arguments, my choice was 1080p 60fps. 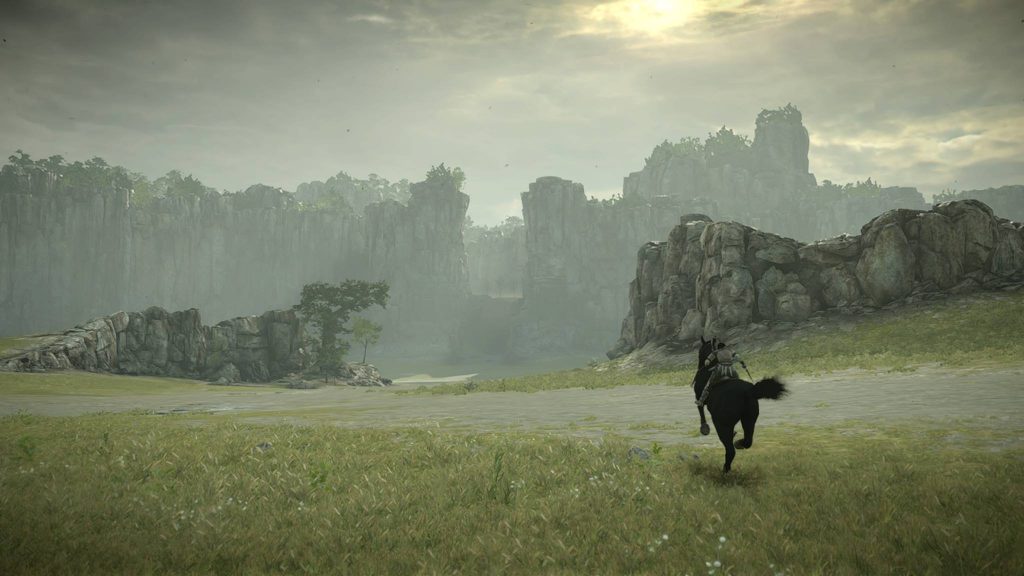 For those new to Shadow of the Colossus, the story focusses on Wander, a young warrior who travels to a forbidden land to solicit the abilities of a powerful being that can resurrect a woman who has died after being sacrificed in a cruel ritual. The creature doesn’t work for free, Wander must defeat sixteen colossi that live in the forbidden land who act as vessels for the being’s power. It’s a simple enough narrative that many will feel nostalgic for whether they played the original release or not as this is a story that is constantly retold in gaming, however the minimalist nature in which the narrative is presented is also quite welcome. It respects the player enough for them to come to their own conclusions while also being direct enough that they don’t feel lost.

Perhaps not so much in contrast is the world that is laid out. This is where the PS2 origination really shows, the land is quite barren with little to do between starting at the shrine and making your way to the next boss. However, thanks to the improvements offered by Bluepoint in the remaster, the empty world feels far more vibrant, serene and deadlier than it has ever been. Originally the game was awash with a dazzling bloom effect that was specifically designed for this era to be a way to hide jagged edges imperfections, while making the game seem more natural. Now the game takes a far more realistic approach while also still maintaining the artistic side that made SOTC so breath-taking before. 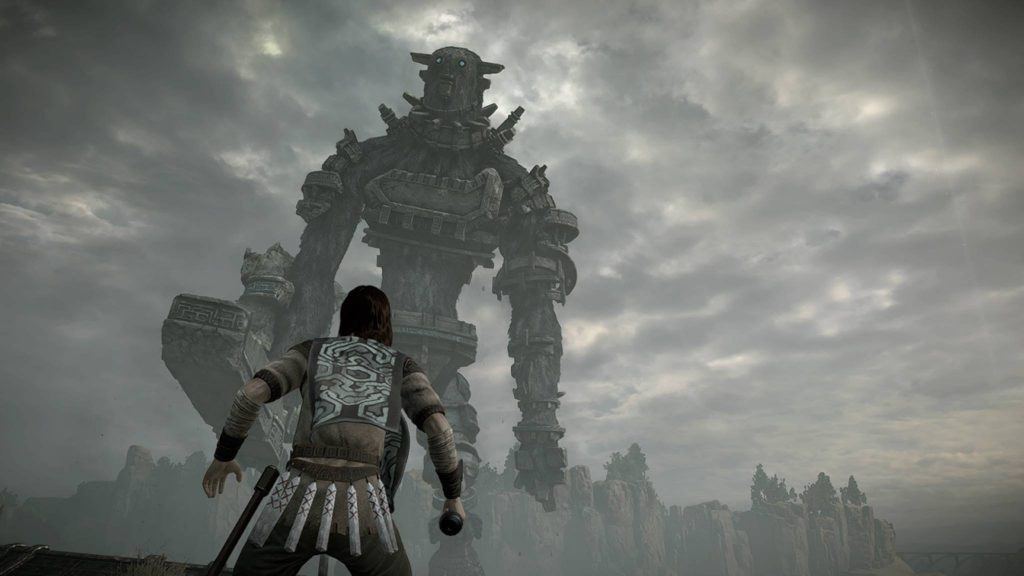 The key thing however, pushing aside the tertiary aspects is the towering beasts that are what we have paid to see here. They are fantastic and still tote the same sense of menace and sadness that they always had, but adding in the realistic shades and physics to truly make them feel alive. Nothing has changed in terms of how you tackle these monumental creatures. You still to on the offensive by climbing their bodies and attacking weakspots, which may disappoint old fans who are looking for surprises. Nonetheless, the Colossi still feel like challenges to overcome and I personally can never get tired of taking on the flying giants for the sheer, nail biting sensation when your grip meter is starting to peter out, moments before striking the final blow. The music is also fantastic as ever and changes depending on the situation, Colossi encounters start with either menacing or muted orchestra before turning into valiant overtones while the tables turn in your favour, later turning into melancholy when the beast falls.

There is a big downside however and unfortunately this is something that was prevalent in the original release also. The controls in SOTC can be incredibly cumbersome and unreliable during some encounters. When climbing some of the giants, Wander will often clamber the wrong way, wasting valuable grip time or simply flicker about as the game tries to work out the complex, physical terrain beneath him. The remaster does provide some different mappings to try that can help somewhat, however in reality this does little to sort the problems out. 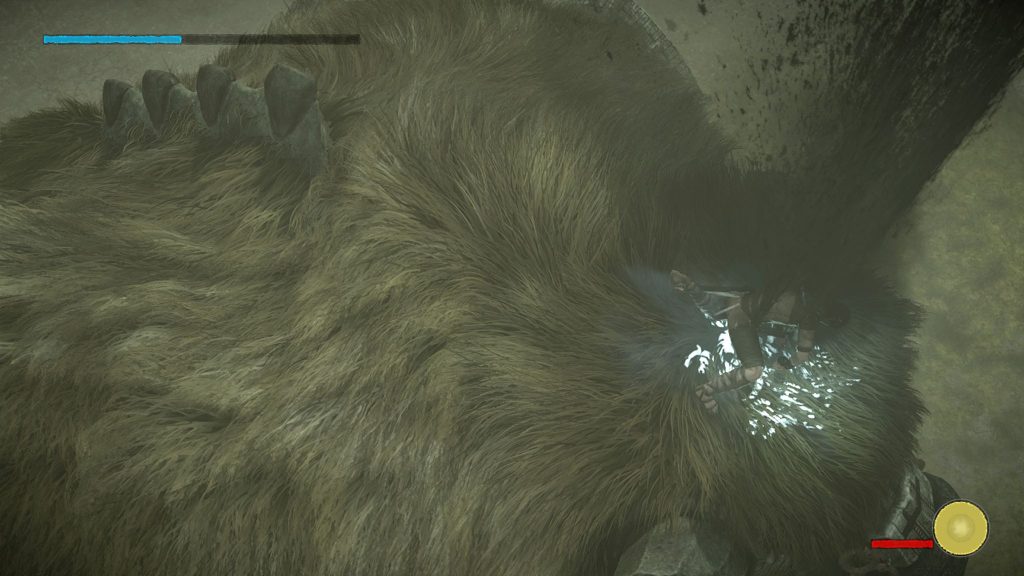 As big as control issues can be however, they are certainly worth overcoming for a game like Shadow of the Colossus. It remains one of the finest pieces of gaming entertainment money can buy due to the sheer uniqueness of the offering. Bluepoint’s Shadow of the Colossus remaster is a fantastic reason to double dip if you loved the game before and a better reason than any to try it for the first time.

Shadow of the Colossus
8 Overall
Pros
+ The graphical updates are a welcome upgrade; the game has never looked better
+ Amazing soundtrack as ever
+ New collectables offer a valid reason to explore the world
Cons
- The controls are still quite stiff and can get in the way at awkward moments
- Sometimes the world can feel a little too empty
Summary
Bluepoint have done a fantastic job of remastering Shadow of the Colossus from the ground up. Taking down giants has never looked, sounded or felt better. Some niggling issues remain from the original such as the controls and pacing, however this does not take away from the sheer cinematic spectacle that more than makes up for it.