Speedrunning is a niche pastime that has certainly gathered more interest with events like Games Done Quick. It’s one hell of a spectator sport to me and SEUM: Speedrunners From Hell looks to play into that whilst testing your spacial awareness and reflexes. 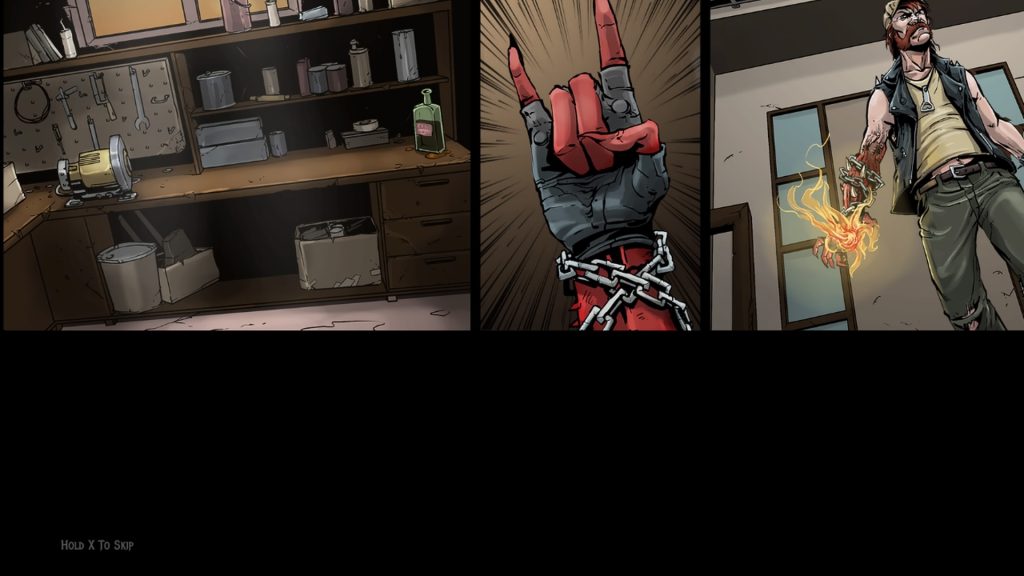 Looking like an remaster of DOOM in the Quake engine, the hell motif carries through with trap-filled caverns. There’s a lot of lava, red platforms and hazards to help portray the gauntlet ahead of you. Geometry is simple with a deliberately old-school aesthetic. It’s effective, although it stays consistent throughout your time with SEUM: Speedrunners From Hell. It might wear out it’s welcome, although you move through the levels quick enough to focus more upon your movement than the surroundings. Backgrounds are fairly simple with very few moving parts. It’s mostly a hazard in itself as most levels take place within a toxic, shark infested swamp.  There is a brief story with Satan stepping into your home to take your beer and your arm.  You gladly take his arm in exchange and then venture into hell for your six pack.  It’s dumb but the narrative is almost too slight to mention.

There’s some nice visual queues coming from your character when a switch is activated or an obstacle is negotiated. Putting the horns up doesn’t outstay its welcome, especially if you’ve just landed a blind shot to finish the level. Mines display their area of effectiveness and you can tell what an obstacle is likely to be on face value. There’s not a lot here to deceive the player, at least in the early going. 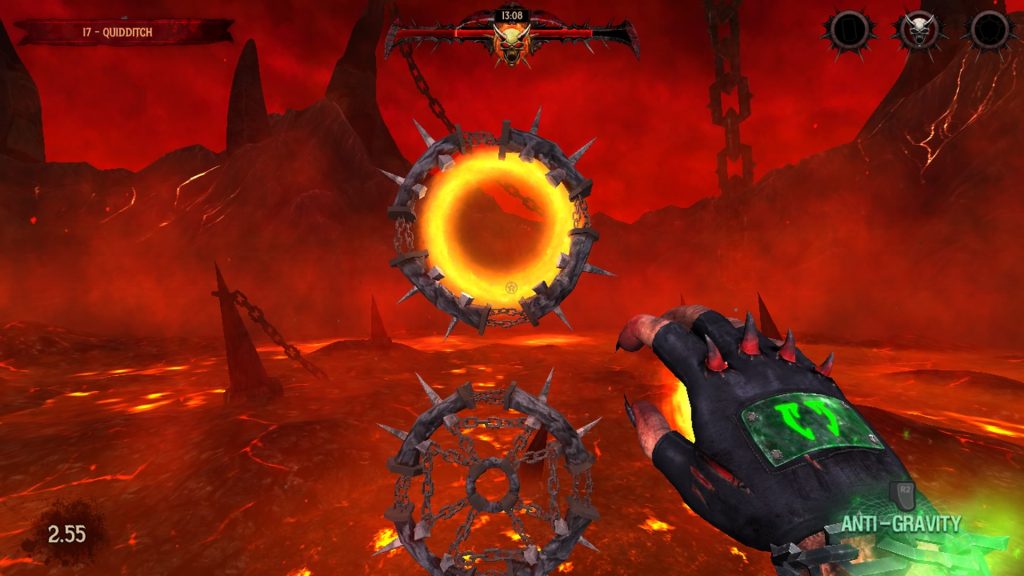 It’s accompanied by a metal soundtrack which works well with the setting. It’s not overbearing and fits the tempo of your movement. At times, it’s catchy. Your chatter is sparingly used to indicate a well-timed fireball or acquisition of a power-up. The devil chimes in on failure which might grate upon repeated deaths. Much like the aesthetics, sound is used to convey function and feedback, rather than flamboyance.

Gameplay in SEUM: Speedrunners from Hell, as the name implies, involves tearing through numerous levels of first-person platforming. Your basic movement is really quick but responsive enough for you to control. There’s a real sense of momentum and speed which, whilst fun to watch, can take a few levels to get used to. You have a decent amount of air control to your jumping and, by default your shot aiming gives you just enough to get by. You do have options to alter sensitivity which is welcome, considering the precision this game allowed you during it’s original PC release. 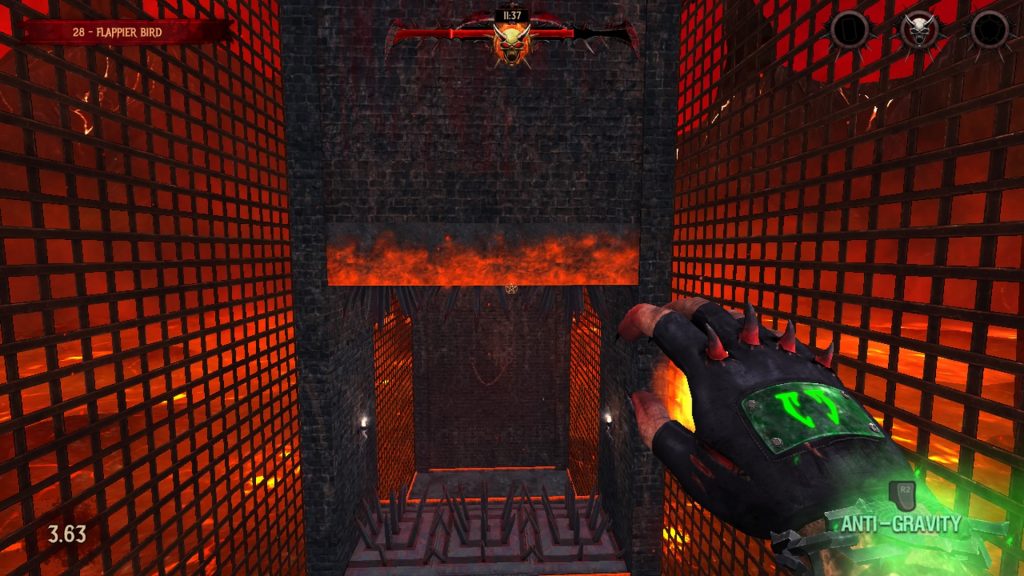 For the most part, defeat and success is on you to master these mechanics as you sprint to each level’s portal in the fastest possible time. Levels carry a variance which helps you steadily learn as you go. Power-ups are introduced relatively slowly with there being a handful overall. They carry specific jobs from teleportation, platform creation and gravity manipulation. You can only use one at a time. Using them in conjunction with one another is something saved for the latter stages.

There is a couple of points where powers show some neat intricacies which seem to go unexplained. Like how gravity effects your basic shots. It’s rare and it’s fascinating to see you discover that but it would be nice to see some of the more advanced techniques given a demonstration. It’s relatively lean on tutorials, barring a simple one when you gain a new power.

With over 90 levels on offer in the base game, SEUM: Speedrunners from Hell offers plenty of challenge. Levels are brief with only one of them taking in excess of 30 seconds. Failure happens often but restarts are instantaneous. Each set of levels is confined to a floor and you progress to the next floor by gaining enough medals for quick times. Some of these times can be scraped by but, with enough repetition, I enjoyed seeing myself improve. 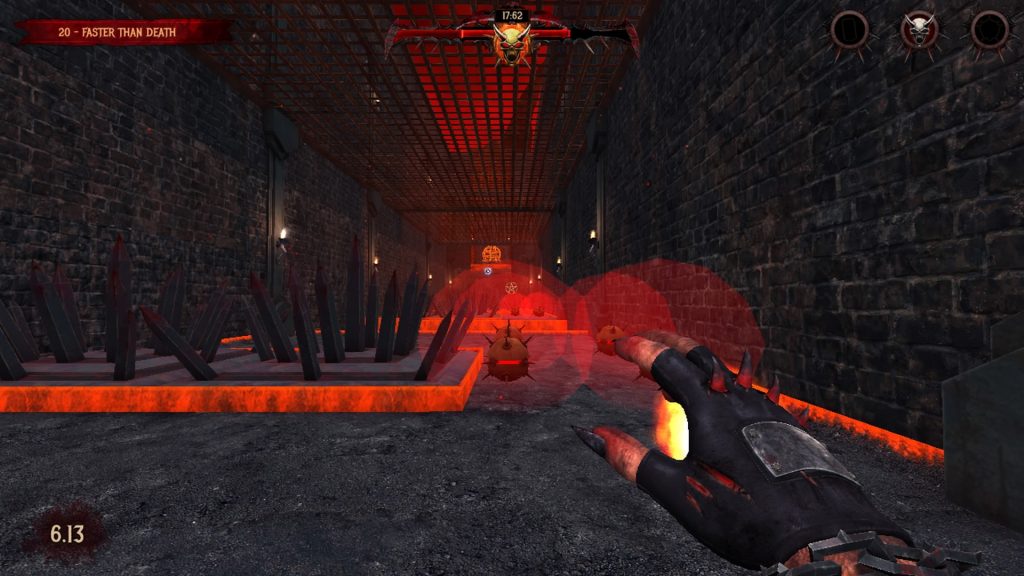 When frustration did arrive, it was often at the hands of my own ineptitude, although the momentum you carry from jumps and teleports has proven a persistent sticking point. Progression does feel satisfying and I haven’t found myself cheated out of victory. For the majority of the levels, you can see what needs to be done and simply have to execute. There’s a couple of sneaky exceptions which feel a little cheeky. Usually the time limit is a giveaway but those moments are few and far between.

The challenge continues with some additional episodes that add dozens more levels and a speedrun mode which adds splits and a timer to your run. You can also select modifiers for collectibles which also unlock additional levels. There’s a lot here and, depending on your skill level, it can take a few hours, days or weeks to complete. I enjoyed it, although the agonising failures started to outweigh the thrill of accomplishment.

SEUM: Speedrunners from Hell
7 Overall
Pros
+ Consistent, responsive controls.
+ Paced well with short, tricky levels.
+ Improvement feels satisfying.
+ Plenty of content.
Cons
- Repetitive visual aesthetics.
- Bare narrative, even if the premise is daft.
- Will prove frustrating to some.
Summary
SEUM: Speedrunners from Hell is a well executed platformer with a heavy emphasis on speed and player skill. It has some devious moments but I can't deny the feeling of self-improvement is a gratifying one. Its simple and functional hellscape might bore with time but there is a tricky challenge within the many levels for players to endure and enjoy.