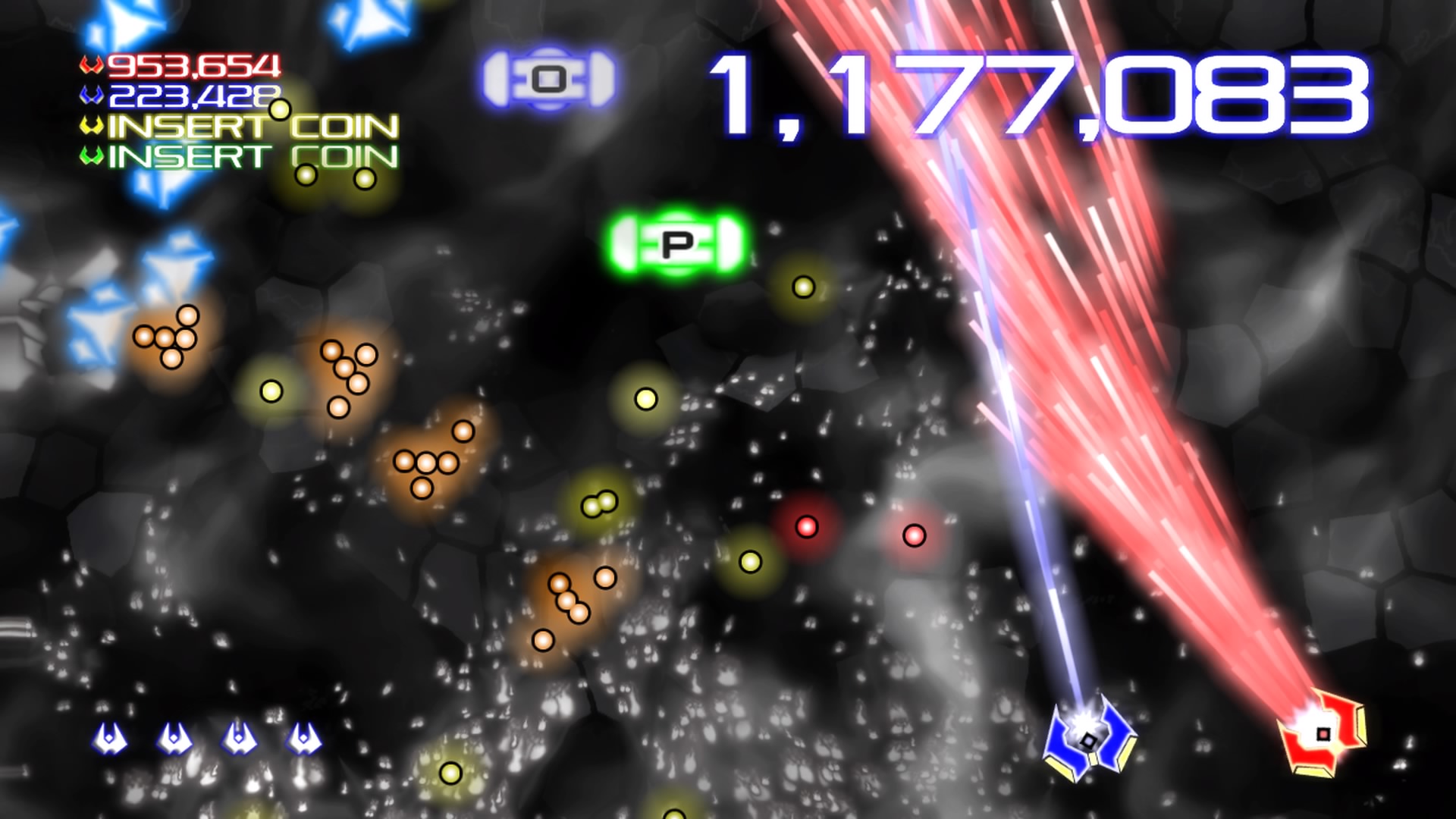 Being a fan of shoot ’em ups is sometimes at odds with being a fan of games that are just enjoyable.  Ikaruga, for example, is polished as hell and a widely respected shoot ’em up but it’s also vindictively hard and therefore a game I just cannot ever seem to enjoy.  I’m telling you this because I’m not the kind of shoot ’em up fan that’ll be one crediting the latest Cave shooter but equally, I’m still a fan of the genre and so are Xona Games as evidenced by this particular shooter.  Score Rush Extended is the genre distilled down to the basics.  A love letter to the core elements that make people like me a fan of the genre.

There’s no plot to worry about.  Instead it’s just you and your space craft flying upwards and destroying the assembled masses that make up the enemy fleet.  Up to three more offline pals can join in to help you out and two types of power up will come your way (‘P’ to power up you firepower, ‘O’ adds a drone) and that’s it.  Don’t expect any other elements or tactics.  No colour-flipping cleverness like Ikaruga, no crazy weapon systems, no fancy scoring mechanics.  Just expect to move and shoot. 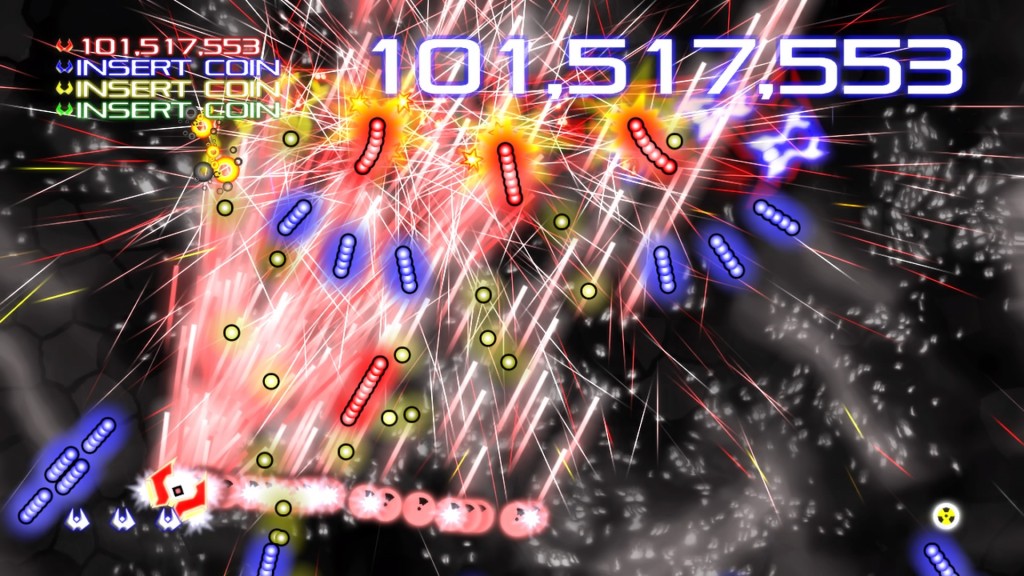 The game is unashamedly a bullet hell shoot ’em up.  Colourful patterns fill the screen as the alien hordes vomit all their bullets at you, seemingly at once.  It could be overwhelming but your controls are particularly smooth.  It’s a standard twin-sticker where you move with the left stick and shoot with the right (holding the right bumper button also slows you down for particularly tricky pattern avoidance). Also, the bullets are bright and bold, standing out excellently from the backdrops.

After each short section of action, a boss will turn up and up the ante even further.  You’d expect that you need to learn their patterns but Score Rush Extended doesn’t seem to be big on that.  The pattern is always ‘argh!  BULLETS!’ and your strategy will always be the same.  The game’s other mode (beyond the basic ‘score attack’ one) is a boss rush.  This throws all eight bosses at you (giving you less chance to pick up power ups) and during this mode you may need to practise a little more to get to the end but here’s the thing.  I took down all the game’s modes, bosses and trophies in a day and while some of it was a little challenging for me, veterans will no doubt eat the game up in super short time.  The ‘expert’ difficulty level is there for those people and it is legitimately savage but it could be argued that the default game is maybe a little too easy. 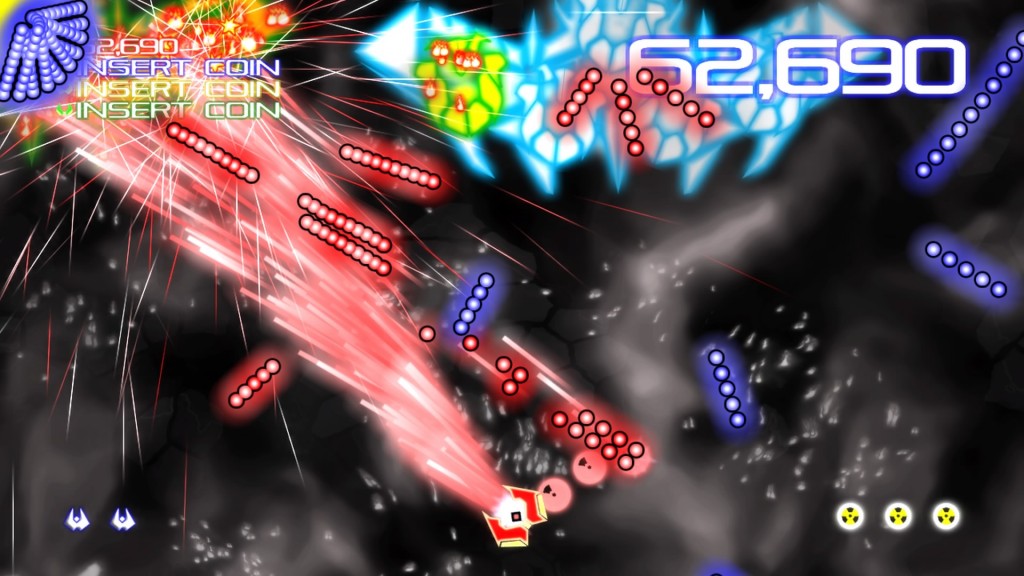 Standing strongly by its fundamentals, Score Rush Extended is quite uncompromising in its values.  Nothing really gets in the way of the gameplay.  No story, no complex weapon systems, no branching levels, no combo meters.  It’s just a basic shooter with the bullet spewing turned up to the max.  Given that the genre leaders, Cave, usually have some lovely hand-drawn levels to admire, it does make this game seem plain and a little cheap.  The awful rock soundtrack does the game no favours either.

Maybe I should expect more but I’m a fan of shoot ’em ups that make life easy for you and then let you go deep if you want to start claiming bragging rights.  There’s no denying this is an enjoyable shooter.  Basic, yes.  Plain, for sure.  But definitely fun and not too punishing for the average fan.  But is it enough?  Score Rush Extended is good but if I’m beating it without losing a life with just a few hours play, that’s probably not ideal.  But it makes me feel good.  So I’m not complaining.

Score Rush Extended
7 Overall
Pros
+ It's fun
+ Simple gameplay mechanics that are good for leaderboard competition
+ Not too difficult
+ Clear and clean visuals
Cons
- Maybe too easy for shoot 'em up fans
- Graphics are maybe too plain
- Soundtrack is bollocks
- Uses the Dual Shock speaker and it can't be turned off outside of your system settings
- No online co-op (which is probably understandable given the number of bullets being flung about)
Summary
Score Rush Extended keeps it simple. For a game that is literally vomiting all the bullets at you all the time, it's maybe a tad too simple. From being easy to beat to lacking in sophisticated gameplay mechanics, Score Rush never seems to really push down on the accelerator but is it fun? Yes. Lots and lots of fun.