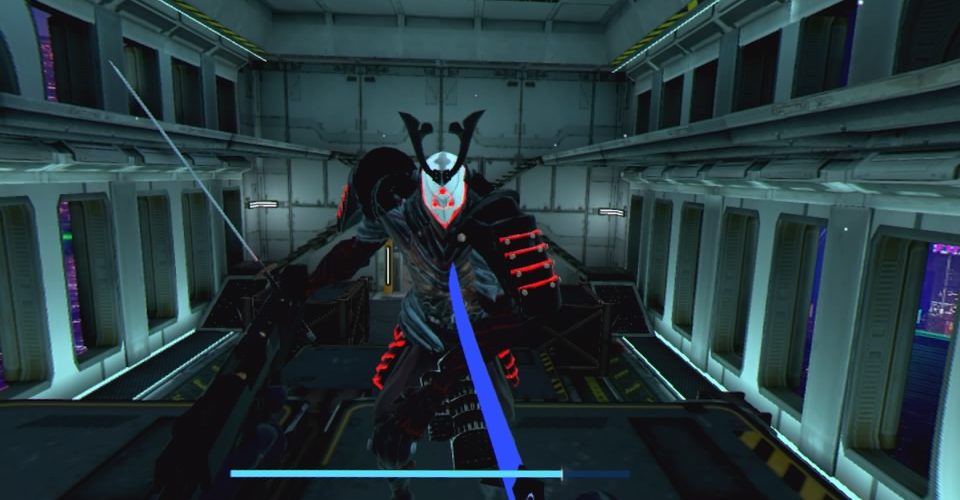 Given that Sony’s track record of backing their own hardware side projects is sketchy at best (PSTV, anyone), we’re pleased to see that they’ve continued to support PSVR and we’re even more pleased that the games coming out for it are branching out of the usual turret shooters and horror games that we’ve come to loathe over the last year or so. In the last year we’ve had quality titles like Astro Bot and Blood and Truth and we were pleased to see Sairento coming up on a small wave of hype.

We obtained a review code a little after some other sites (because we were late to ask) and the early signs were good with the game garnering some very favourable coverage. This particular reviewer was caught up on New Star Manager and Blazing Chrome though and so it took a hot minute to get the old PSVR headset back on but when I did, it was with a sense of excitement. 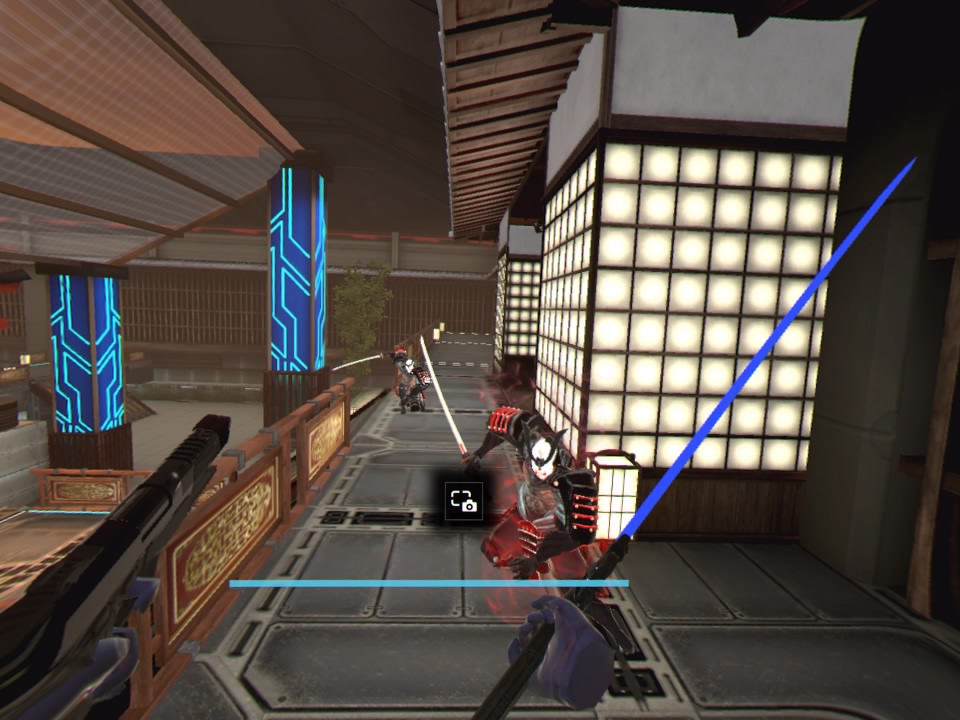 Here’s the thing though, Sairento does not present the best first impression. It throws you into a menu that has too much going on. The first option is ‘missions’ and so we pressed every button on each of the mandatory Move controllers, getting nowhere in the process until suddenly we did. I don’t know why but the T-button seemed super unresponsive in the menus, to the point where we figured it was time to buy a new pair of them. However, after a frustrating few minutes we were suddenly in on the action. Of course, the game threw us into a room of death and we had no idea what to do.

Heading back to the main menu we found a tutorial which helped and then we went back into the missions mode, fighting that fucking T-button every step of the way. An embarrassingly long amount of time later we spotted the ‘campaign’ option on the main menu (in third place) and selected our way into that. Suddenly we had a bit of context. Some plot to explain what was going on. Of course it threw us into that tutorial again, pissing us off to no end but we were mostly pissed at ourselves. 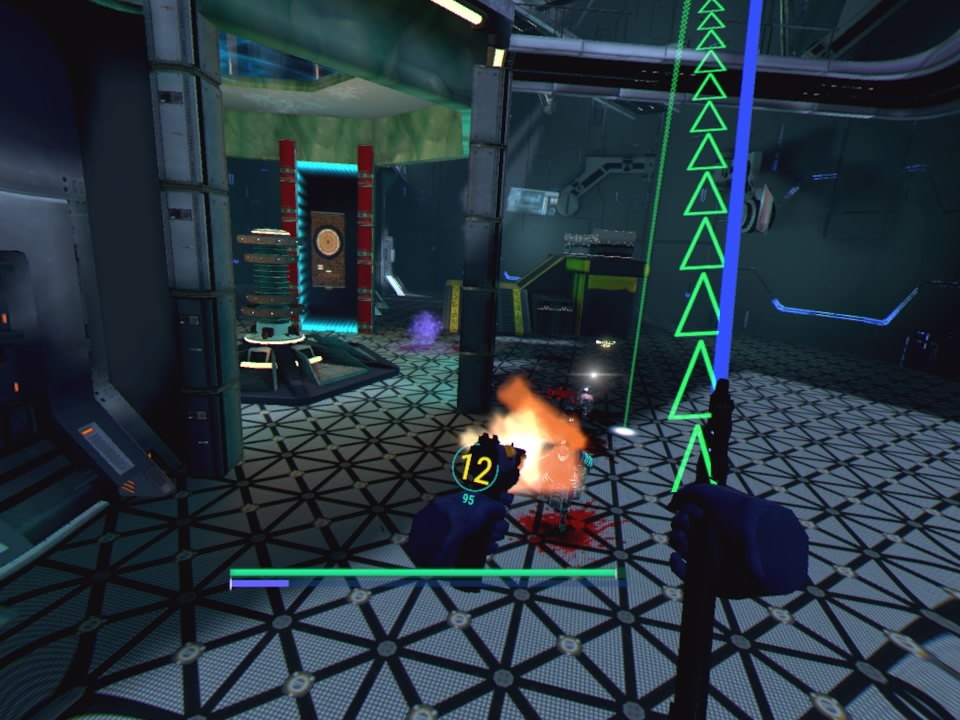 Our first few hours into Sairento proved to be frustrating and we were wondering what all those nice reviews were seeing in it. That was a while ago and having finished the game, looking back we’re now gushing about it just as much as anyone else. So, what is deal?

You play as a Sairento, a sort of techno-ninja with a heap of skills but is someone more likely to be taken out by a computer virus than a bullet. Tokyo (the Tokyo of the future, but what looks like we imagine current Tokyo to look like) has been rocked by a series of terrorist attacks and you’ve been tasked with investigating them.  This, of course, leads to you discovering a larger conspiracy as you play through the campaign’s ten missions. 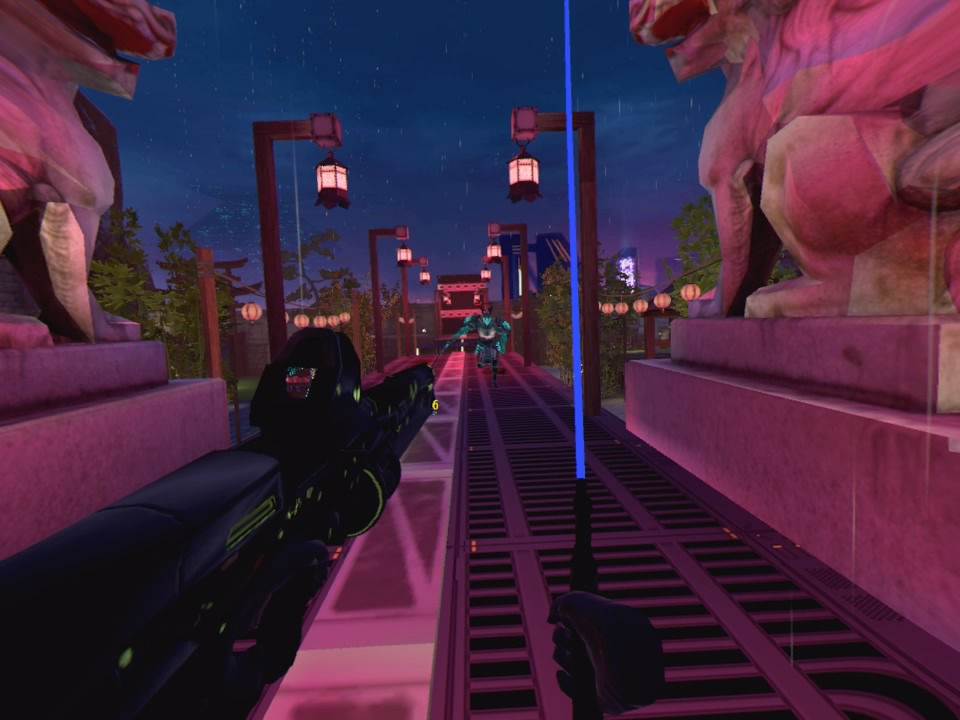 When you get into the action, it will take a while for the controls to click.  Each Move controller represents a hand and with them you grab whatever weapons you’ve allocated to your four weapon slots by either reaching over your shoulder for primary weapons or down to the sides of your waist for sidearms.

There’s quite a bit of flexibility in your load-outs.  You can mix it up with swords, shotguns, assault rifles, sniper rifles and even a bow and arrow.  We eventually settled on a combination of plasma sword (because it was cool) and a sniper rifle (that we mostly used up close because it was so powerful) but would also switch over to pistols in some situations. 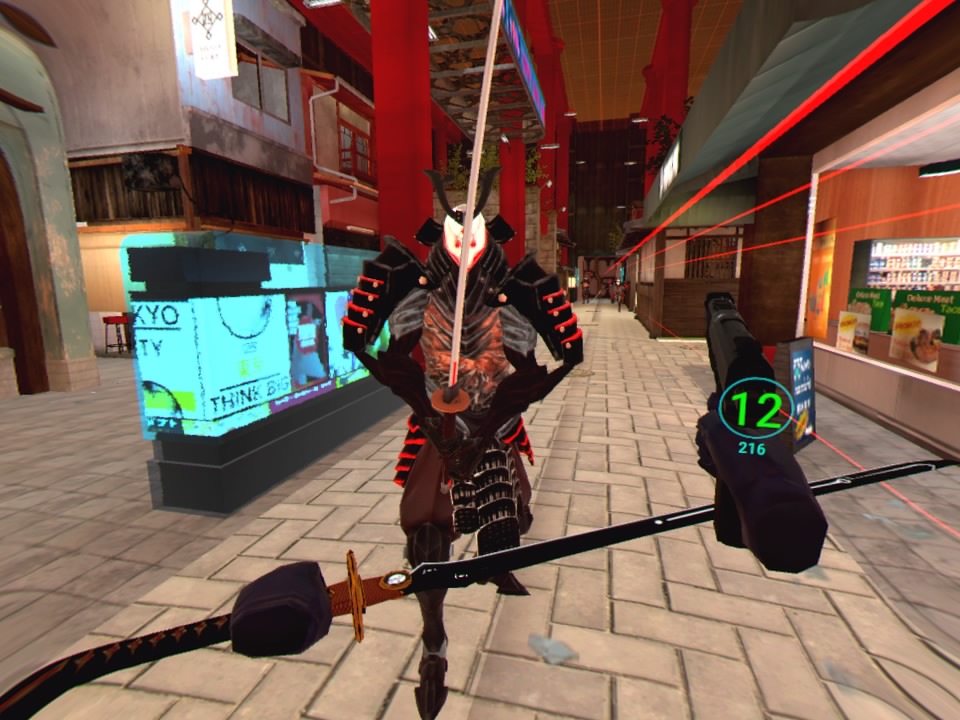 Initially we sacked off the swords because most of the time people are shooting things at you and the swordplay felt a bit like Killing Floor: Incursion which is to say that I was just waving my arm in short motions like I was trying to slice up an angry cucumber.  And so for five or so missions this was basically a shoot ’em up for me with very short levels.  It felt more like a truncated version of Shadow Warrior than the sort of ninja sim that these other reviews were describing.

But then it clicked for me.  The controls are a little unwieldy at first but when they click, it all starts to make sense.  The trick is in mastering the main Move buttons.  On the left hand the Move button controls forward motion, press it to walk and double tap to run.  You control direction by looking where you want to go but the

buttons will also quarter turn you. 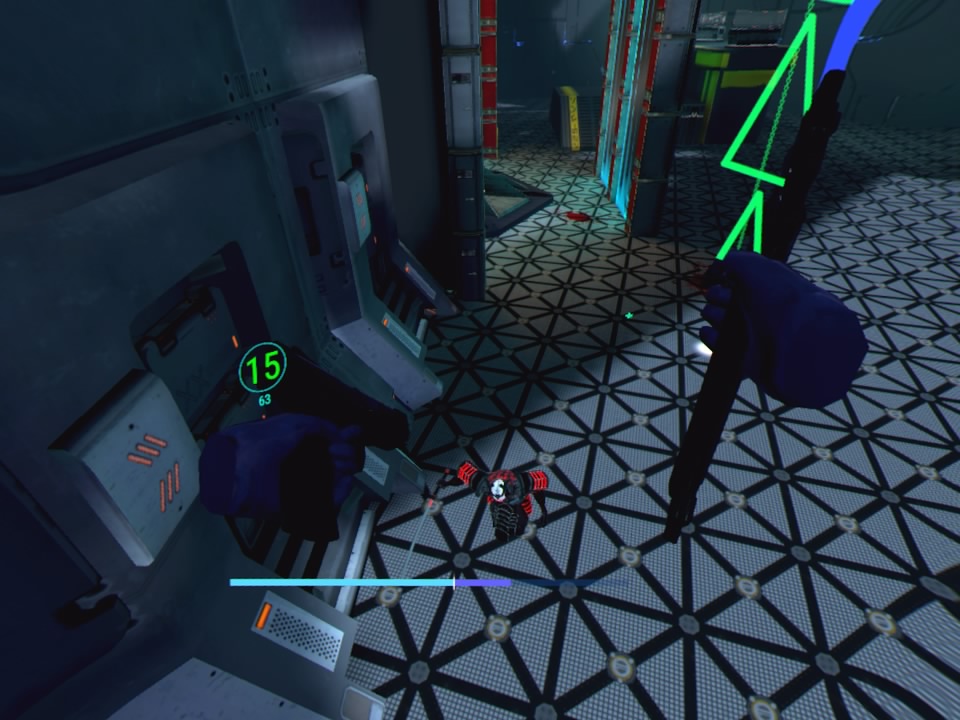 This allows you to run around and not get diced up by your enemies.  The other Move button allows you to jump and this is where the magic happens.  You hold it down, point where you want to jump to and you’ll take to the air.  You can also double jump (and triple if you get the right bit of loot to allow it).  Holding the button also slows down time.

This allows you to pull of Matrix-like moves as you jump out of danger, hit a slick wall run, jump down, slide towards your enemy and chop them down with your sword while plugging some sucker in the distance with your pistol.  It takes a while to get it but when you do it’s some of the best fun you can have in VR.  Each level suddenly stops being about survival and becomes about vanquishing your enemies in style.

There’s truly something special about playing the game that way.  Of course you can just play it as a regular old FPS if you so choose – kind of like how you can play Hotline Miami as a regular top-down shooter or your chain your kills like some sort of angel of death sweeping through the levels and experience the game in a whole other way. 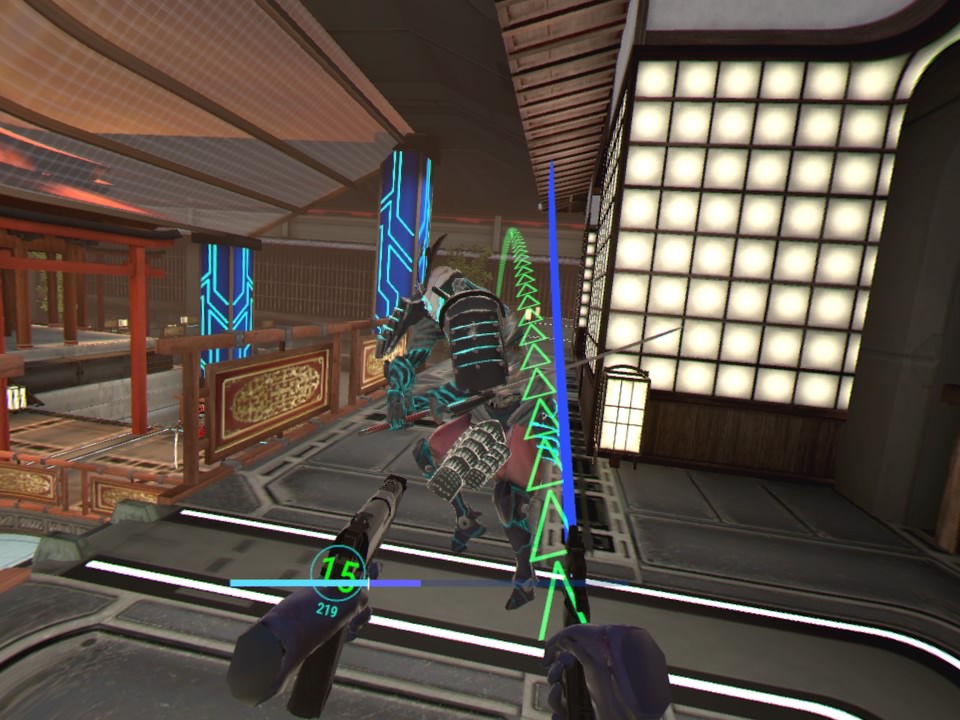 The campaign itself is very short.  There are ten levels, some of which are over in five minutes and not many of which are over fifteen and so you’ll be done with it pretty quickly however the campaign really just seems to be designed as a taster for the online and looting parts of Sairento.  And, look, to be honest if this wasn’t a VR game or, more importantly, was just a DualShock controlled shooter/slasher, this would be a pretty poor game.  But much like things like Ghost Recon (before it became another Far Cry type title) and Rainbow Six, beating the story isn’t the end of the game.

When you do finish the story, you just carry on picking missions on a map and adding various difficulty modifiers in an effort to obtain better and better loot.  You can then take these into the game’s online portion where you and a some friends can take on various co-op missions.

It’s not brilliantly fleshed out though as you’ll just be playing in the same ten locations from the game and while the loot stuff is nice, you can beat the game pretty easily with fairly standard gear and so really these all just become reasons to dive back into the game and have a quick razz now and again rather than this becoming VR’s answer to Destiny or The Division. 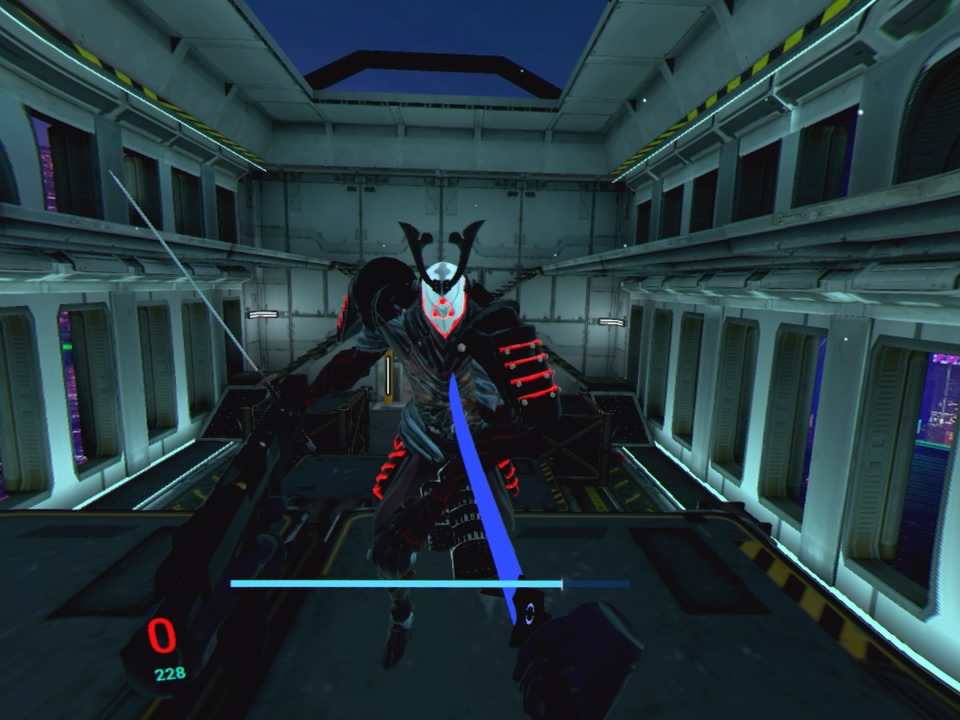 Unfortunately, at the time of reviewing (a couple of weeks after the release date) the online modes were devoid of players which is a shame.  This’ll be one to play with your online friends if you can convince them to nab themselves a copy of the game.  But we do recommend that you try as this is a game that deserves playing.

Visually the game is pretty good.  Obviously the PSVR hardware does it no favours but we felt suitably immersed throughout.  There’s not much of that VR wow-factor and in a way the VR seems to be there because without it this would be a fairly thin, shortlived experience but as a whole the presentation is okay (those terrible menus aside).

What Sairento does best though is giving you that hero fantasy that only Superhot has given us so far.  It makes you feel like you’re in a movie busting out your best Neo/John Wick moves and sometimes that’s all you want from a VR game and so, niggling doubts about the game’s length aside, this little ninja-’em-up is a very easy recommendation.

Sairento VR
8 Overall
Pros
+ A great mix of sword and gun play
+ Smart controls (when you get used to them)
+ Unique gameplay
+ Good looting
+ Does a great job of making you feel like a badass
Cons
- Very short
- Online modes are a bit dead
- Menus are poorly designed and unresponsive
- Doesn't offer much variation
Summary
Concerns over longevity aside, Sairento offers you a unique twist on the old 'be a ninja, kill everyone' style of game and uses PSVR effectively to make you feel like a high level ninja assassin better than any game since the original Tenchu.