Rym 9000 is a vertically scrolling shooter that comes from enigmatic Moroccan solo dev Sonoshee and taps into a retro aesthetic that is both recognisable but also one that never really existed. Confused? Well stick with us.

The game’s intro that explains that Rym 9000 is a highly-treasured commodity that exists on the moon and that you are looking to go there and mine it. However, in the way is an army of enemies in the way across the game’s five levels.

The plot, as you’d expect from this type of game, is entirely throwaway but before long you are directed through to the game itself, skipping the main menu and eschewing any type of tutorial. This is a bit of an issue because while the basic gameplay is extremely easy to grasp, you move with the left stick or d-pad and any of the face buttons, shoulder buttons or bumpers will fire your gun, the few other elements aren’t explained at all. 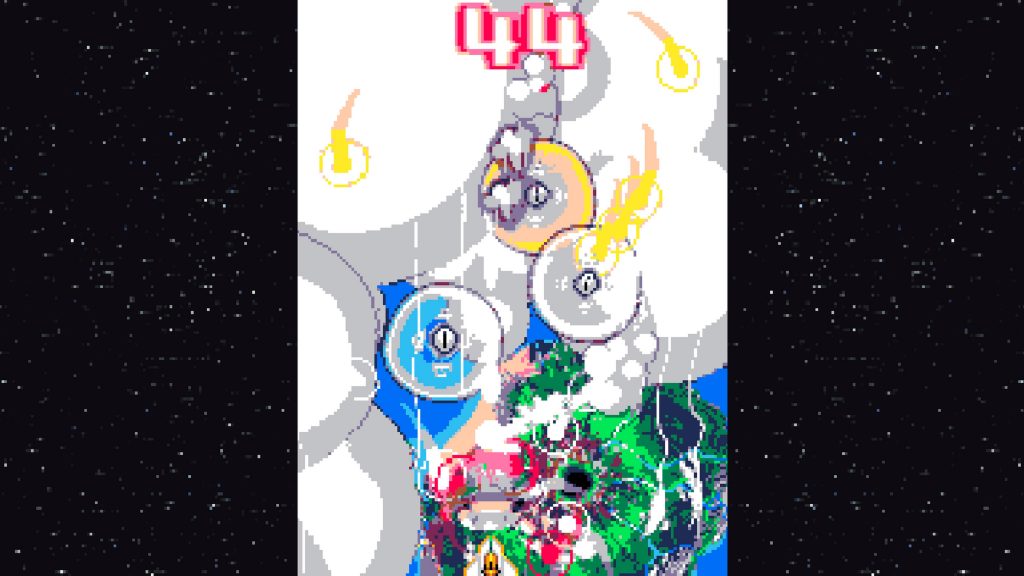 In typical shoot ’em up fashion, shooting will slow you down but aside from that there’s no other controls to think about. No shields, no bombs, no alternate fire modes. For the most part you can just pick your fire button and hold it down unless you need some extra manoeuvrability.

Enemies arrive from above mainly but will often sneak in from behind. They come in waves that don’t overlap, so you are dealing with each threat before the next arrives which does give it a slightly stilted feel. However, this makes sense as the game relies more on memorisation than reflexes. There are certain situations where an enemy will kill you without you having much warning and so you’ll have to remember when this is going to happen and adapt.

Dying takes you back to the start of the level and while each level is pretty short, they are difficult. Each level has a boss at the end and these can be bullet sponges, so dying towards the end of one of these battles can be galling. To compensate, the game lets you level select any of the five levels right from the off, which is an odd choice but, given the game’s difficulty, does seem like a smart compromise for if you want to see more than just the first few minutes of the game but haven’t got the skills to make that happen.  Also, the restarts are pretty quick so your frustration only lasts a second or two before you’re back to the blasting. 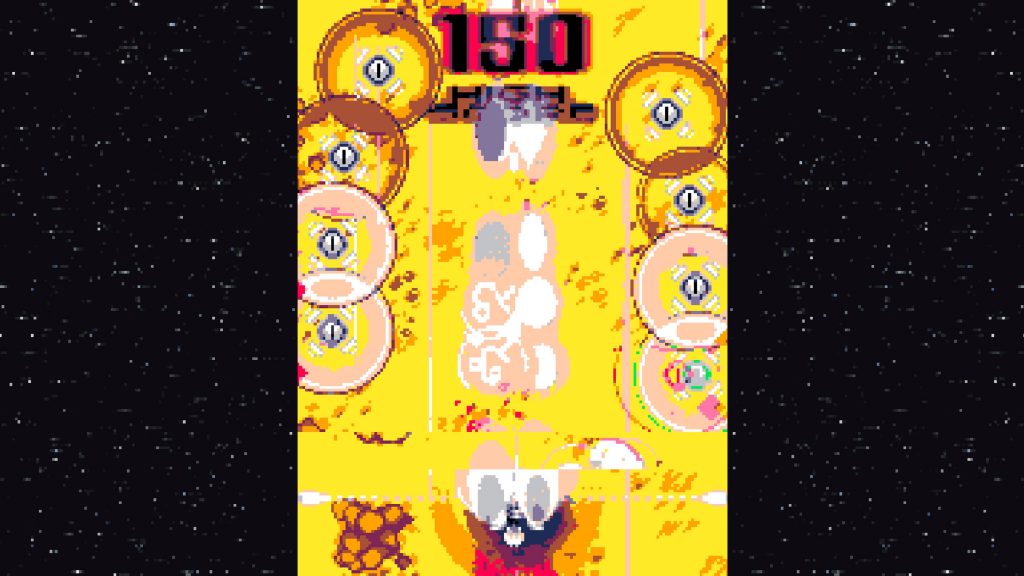 In terms of clever shoot ’em up mechanics, there’s not many here and what is here isn’t immediately apparent because of that lack of a tutorial or any in-game prompts. Enemies start off as white but turn yellow and then red, the points awarded for destroying them drop from X3 to X2 and then X1 as this happens, however the leaderboard in the game isn’t very prominent and so scoring may not be a massive concern for most players, especially when survival is not exactly guaranteed.

When you take damage, you start using the Glitch Gunner weapon. This weapon has a lot more damage output but if you take a hit in this state, it’s back to the start of the level for you. Shoot ’em up experts may choose to deliberately stay in this mode to maximise their scoring but regular folks will be looking for the health pickup that puts everything back to normal, reducing your firepower but giving you the security of knowing you take another hit.

It’s a pretty simple system but one that the game doesn’t explain at all. I had to go digging through the game’s discussion group on Steam where these mechanics have been asked about for over a year now. Also, the game does rather hide its main menu away as well as its option screen. It’s not too taxing to find but it’s not the quickest or most intuitive UI we’ve ever seen, that’s for sure. 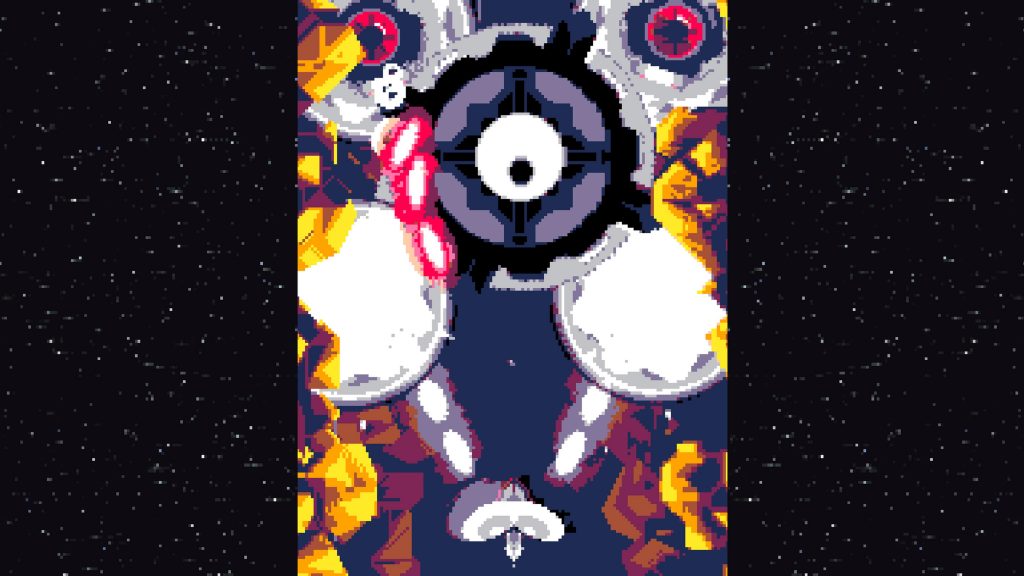 So, at the start of this review we mentioned that the game has a retro look but one that never really existed. As you can see from the screens, this isn’t a high-resolution game but it’s not the usual pixel art either. Much of it looks like they’ve taken video or more detailed visuals, reduced the number of colours, increased the saturation on some of them, recorded it on a shaky video camera and then played it back on an old VHS player. It’s insane.

Combined with the game’s intense, and excellent, soundtrack, Rym 9000‘s visuals really have an impact and we’ve not seen anything like it. Maybe if you played Nidhogg but set your TV to the sort of contrast and brightness that would cause it to start a house fire.

As intense as that all is, it doesn’t really do anything for the gameplay. We like this genre but mostly favour games by Cave, the makers of Dodonpachi and Pro Gear, who are the masters of making everything look pretty without the visuals getting in the way of the gameplay. You’re always aware of which pixels constitute your hit box in those games and are able to carefully negotiate through the intense bullet patterns their games throw at you. 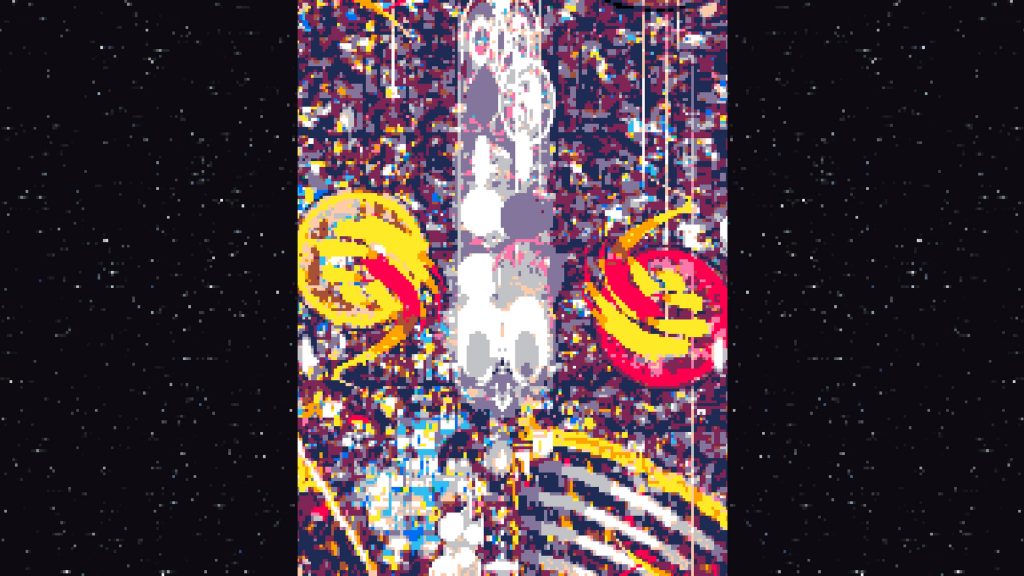 Rym 9000‘s visuals don’t allow for that kind of precision and given how fast and destructive some of your foes can be, it ends up feeling like you have to keep putting in reps before you can memorise the levels enough to get through them. However, despite that the game does keep pulling you back although there are many moments of frustration along the way.

You can turn off some of the game’s more distracting visual effects, if you can find the setting, and this does genuinely help you to play a bit better but that does then detract from the only thing that makes this game stand out amongst its peers, which is the insanity of it all, so you’ll want to play it both ways and see what you prefer. 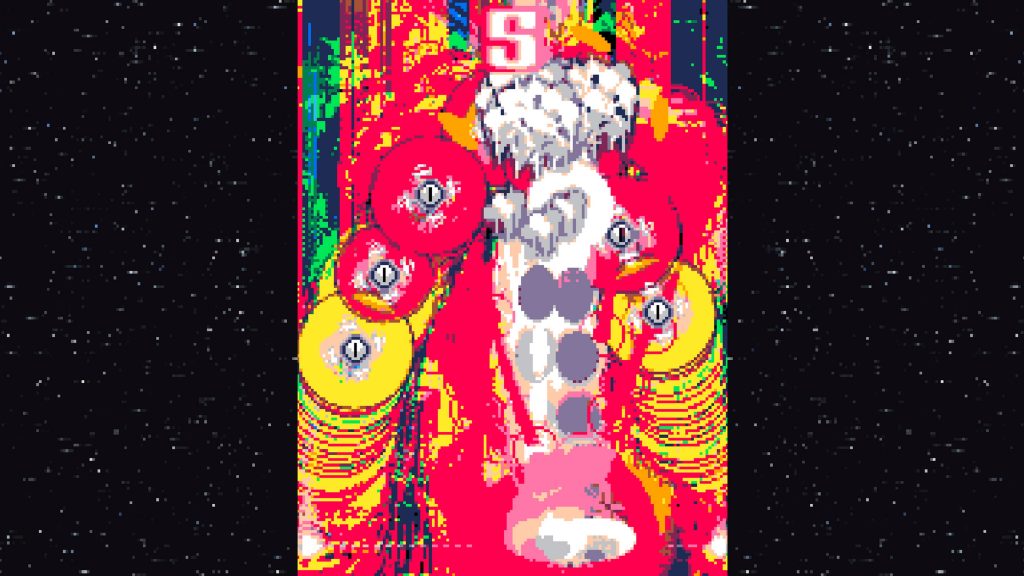 On the plus side, the feeling of beating a level is very satisfying. The game’s trophy set is also pretty smart, giving you reason to replay levels to get them. And we do like our shoot ’em ups to burn brightly but briefly. There’s nothing worse than a shoot ’em up that takes hours and Rym 9000 knows that and makes everything pretty bite-sized.  You have to let your eyes adjust to the game’s stylistic choices and get into the groove with the gameplay.  Once you do, it’s really hard to put this game down.

It’s tricky to know what audience Rym 9000 will find though. Shoot ’em up aficionados will appreciate the game but will have plenty of better options out there to play, casual players will be put off by the difficulty and modern gamers won’t know what the hell is going on but if you’re in that sweet spot, then Rym 9000 will be an entertaining challenge.

Rym 9000
6 Overall
Pros
+ Certainly looks different
+ Addictive
+ Controls well
+ Quick restarts
+ Level select is welcome
+ Good soundtrack
Cons
- Visuals are maybe a bit much
- Needs a tutorial
- May be too challenging for many
- Boss battles are a little too lengthy
- Relies on memorisation
Summary
Rym 9000 is a brief but exciting shoot 'em up that may struggle to find an audience because of its eye-melting visuals and high level of challenge but if you can make the adjustments, this is a fun game that is addictive and exciting.